1950s Paris Through the Lenses of Four Photographers 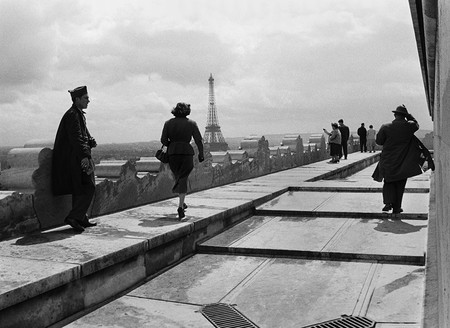 What was Paris like in the 1950s? An epic collage of contradictions – grubby and refined, chaotic and serene, rigid and liberated – just as it is today. The photographs of Sabine Weiss, Christer Strömholm, Peter Miller, and Maurice Sapiro provide glimpses into this iconic era and reveal what has persisted and what has disappeared with the open-backed buses and ermine stoles.

Paris and photography in the 1950s

As romantic as it might appear in some of the defining images of the decade, life wasn’t always easy in Paris in the years after the Second World War. From 1946, the capital’s population grew by 50,000 people per year, reaching a total of 2.85 million in 1954. However, almost no new housing had been constructed in a quarter of a century and close to 100,000 residential buildings declared uninhabitable were nonetheless crammed full. Inside, conditions were miserable: one in five homes was without running water, two-thirds didn’t have a toilet, and three-quarters had no bathing facilities. Overcrowding on this scale also led to a spike in tuberculosis deaths.

At the same time, the city was a hotbed for talented photographers. The biggest French names in the game, including Brassaï, Cartier-Bresson, Doisneau, Ronis, and Izis, were busy documenting daily life for publications like Life and Vogue and laying down the tenets of what became known as humanist photography. Somewhere between photo-journalism and picturesque society paintings, the emotionally charged black and white images captured fleeting moments in the lives of their subjects. Collectively, they present a poetic vision of Paris and its people, which has since inspired nostalgia for a golden age in the city’s history.

In June 2016, the Jeu de Paume, France’s foremost photography and media gallery, described Weiss as the ‘last representative of the French humanist school of photography’ in its introduction to the first ever exhibition of her personal archives at the Château de Tours. She may not love this label – or any others, for that matter, including ‘feminist’, despite her being the only woman to enjoy a 60-plus-year career in a traditionally male-dominated field – but she does admit that it has some resonance with her work. 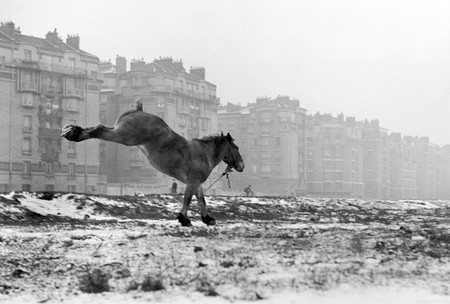 Born in Switzerland in 1924, Weiss came to Paris at 22, reportedly to escape a romantic entanglement, and found work as the assistant to fashion photographer Willy Maywald. Six years later, while at the Vogue offices, she made the acquaintance of Robert Doisneau and soon thereafter joined the Rapho agency and signed a nine-year contract with the lifestyle magazine. During this period, while shooting around the world for a range of international publications, she focused in on her interest in humanity, combining the beauty of the quotidian with incisive social commentary. 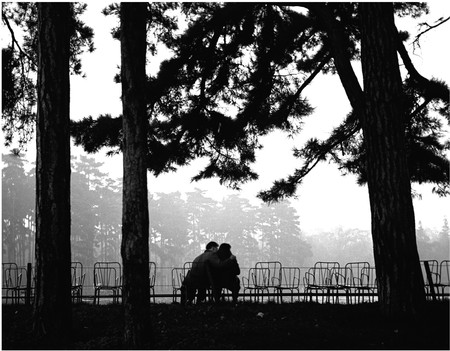 The Paris of Weiss’ photography from the 1950s is one infused with hope and joie de vivre but in the low light, provided by street lamps, cars, and candles, there is also a sense of mystery. On her unique approach, she has said: “I take photographs to hold on to the ephemeral, capture chance, keep an image of something that will disappear: gestures, attitudes, objects that are reminders of our brief lives. The camera picks them up and freezes them at the very moment that they disappear. I love this constant dialogue between myself, my camera and my subject, which is what differentiates me from certain other photographers, who don’t seek this dialogue and prefer to distance themselves from their subject.” 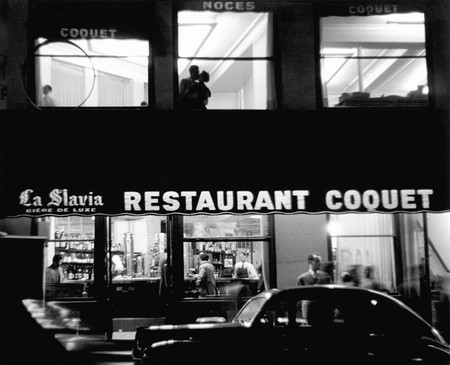 One of the great figures of 20th-century Swedish photography, Christer Strömholm lived in Paris for stretches of time between 1946 and 1964. Initially trained in graphic art and painting, it was during these stays that he discovered the large-format camera and the possibilities of expression photography offered that he had been seeking elsewhere. Working in the French capital and especially around the Place Blanche, he developed his own unique style of black and white street photography. 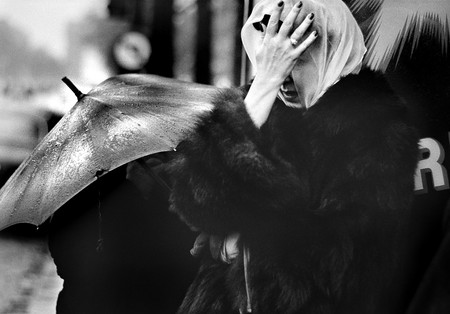 Strömholm first came to Paris at the age of 28 to study at the Académie des Beaux-Arts. In the early days, he worked on a series of artist portraits as well as shots of walls, shadows, and minimalist settings. He also undertook courses in Florence and Faenza and adopted the pseudonym Christer Christian. Later, his work would yield principles of the photographic image such as ‘existing light’, ‘exposure moment’, and ‘personal responsibility’. 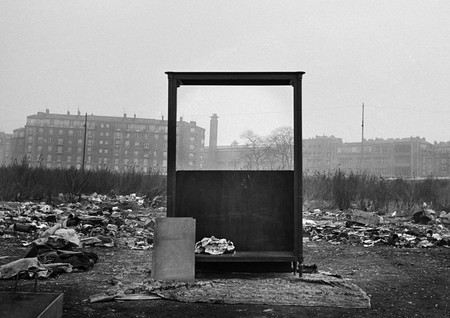 By the early 1960s, he had established friendships and professional relationships with members of Paris’ transsexual community. His most famous series of portraits, titled Les Amies de Place Blanche, documented his often-glamorous subjects’ everyday lives in hotel rooms and cafés as well as their working nights on the streets of the red-light district. 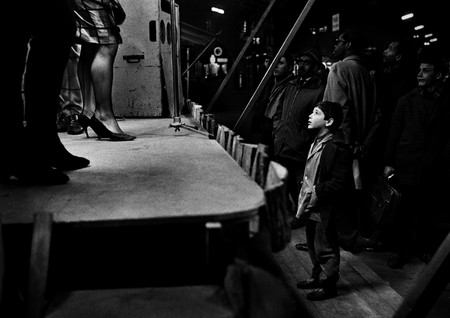 Miller’s first experience of Paris was in 1954 as an assistant to Yousuf Karsh, the renowned portrait photographer, on a three-month tour of Europe, during which they took pictures of celebrities like Pablo Picasso, Le Corbusier, Christian Dior, André Malraux, and Albert Camus. At the time, he was still a student at the University of Toronto and after a summer of driving Karsh’s Chrysler and heaving camera equipment, lights, and backgrounds up narrow Parisian stairwells he returned to Canada. 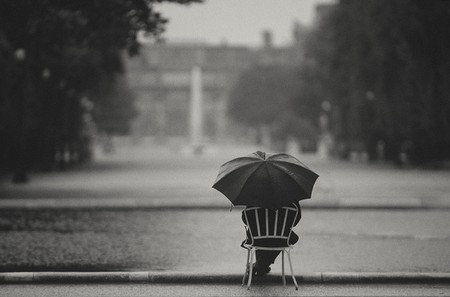 After graduating and enlisting in the US Army, he was stationed in Paris for three years as a Signal Corps Photographer. He used his private’s pay to purchase his Rolleiflex and Leica cameras and a French disguise consisting of a parka, nondescript pants, and brown shoes, which allowed him to move through the streets without drawing the attention of the locals, who were weary of seeing GIs merrily on their way to the pleasure houses of Pigalle. 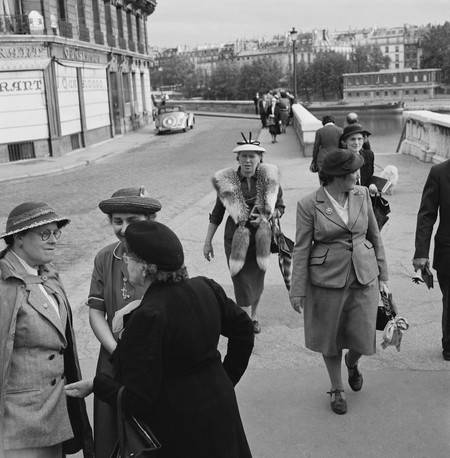 Either on foot, just as he ‘used to hunt for grouse in Vermont’, or riding the open-backed buses, he traveled hundreds of miles across Paris from his favorite island, the Île Saint-Louis, to the playing fields of the Bois de Boulogne, searching for something worth immortalizing on 35mm film. Only about 200 images met this high standard and the book he published 40 years after leaving the city assembles the best of these. “I knew when I took a good one,” he writes, “for my body tingled and goose bumps popped up.” 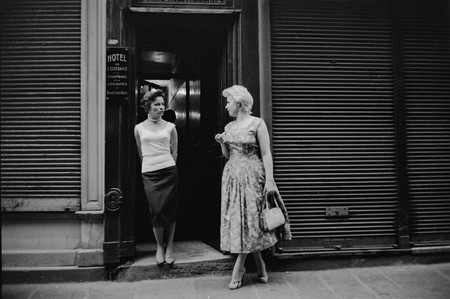 In 1956, while stationed in La Rochelle and later Poitiers as a trumpet player and assistant conductor in the 279th Army Band, which was tasked with promoting Franco-American relations and generally spreading good cheer, Sapiro spent his weekend leaves photographing the capital. For $99, he bought a Leica IIIF from the Post Exchange with which he shot the city in radiant golden tones, inspired by the saturated colors of the Lumière Autochrome film process. 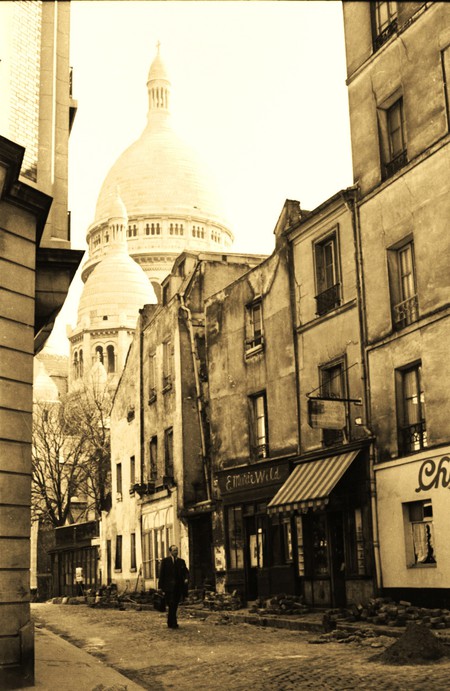 Each day in Paris would begin the same: with a coffee and croissant on the Champs-Élysées in view of the Arc de Triomphe. The clicking of the shutter would begin on the terrace at breakfast and continue along the streets of Paris, most often in the direction of the Louvre, not yet overrun with tourists, where Sapiro decided that painting and photography would be a major part of his life. 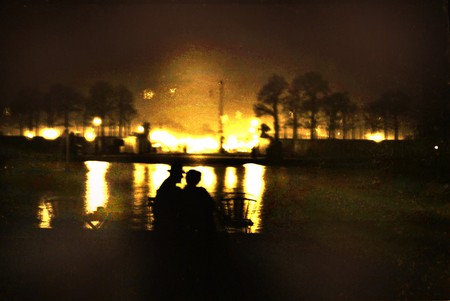 After a 40-year career teaching instrumental music to elementary school students, Sapiro retired in 1996 and focused on his artwork. Now, he is best known for his paintings – landscapes, still lives, and dreamscapes – and though he’s reluctant to label himself with a particular style, he sees his work as being in the traditional of Tonalists like Whistler and Iness. 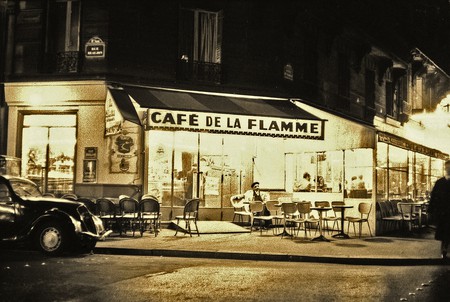