18 Film Posters That Capture the Essence of Paris 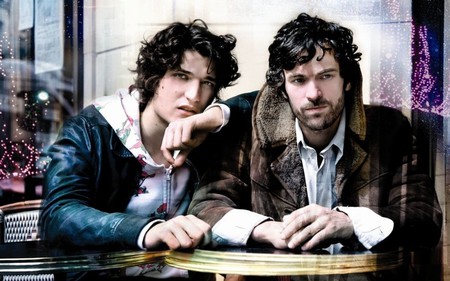 No city is two-faced like Paris. For some directors, it’s a dreamlike village, all geranium-planted balconies and pretty vistas; for others, it’s a snarling concrete metropolis, ravaged by crime and paranoia. Typically, one camp is composed of holiday-makers, the other of filmmakers who call Paris home. No prizes for guessing which is which. But have either truly captured the city’s essence? If posters are the windows to movies’ souls, these 18 designs should help us figure out just that. 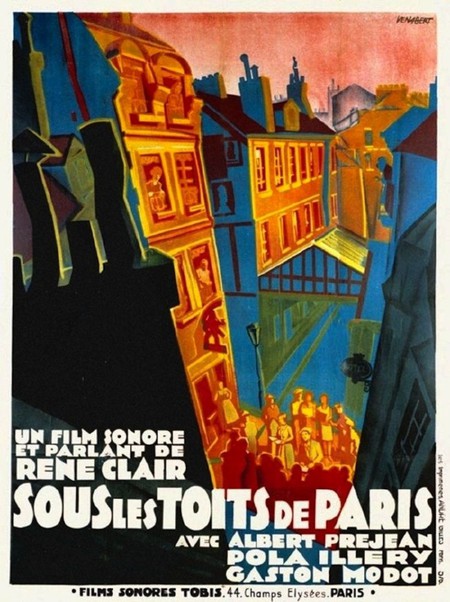 This colorful yet still somehow menacing poster for René Clair’s Under the Roofs of Paris (1930) perfectly captures the tone of the film, which is in the musical-comedy tradition but often sinks into darker moods than the genre usually accommodates. The narrow, crowded street and black chimney stack evoke a grimier, more industrial side to the city that isn’t always spotlighted. 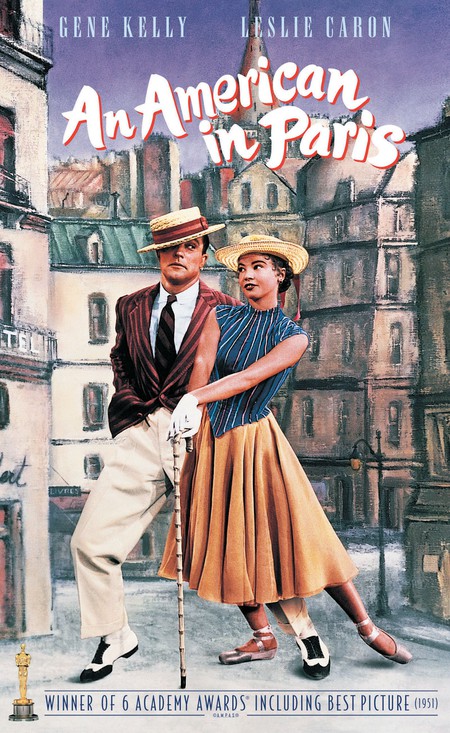 An American in Paris (1951) │ Courtesy of Metro-Goldwyn-Mayer

By comparison, this pastel poster for Vincente Minelli’s An American in Paris (1951) is filled with light and air, the kind of romantic imagery that still dominates foreign-made films about the French capital. There is something, too, in the way the couple is so out of scale with their surroundings, a kind of unintentional visual metaphor for how American cinema imposes its idea of Paris’ essence on the world. 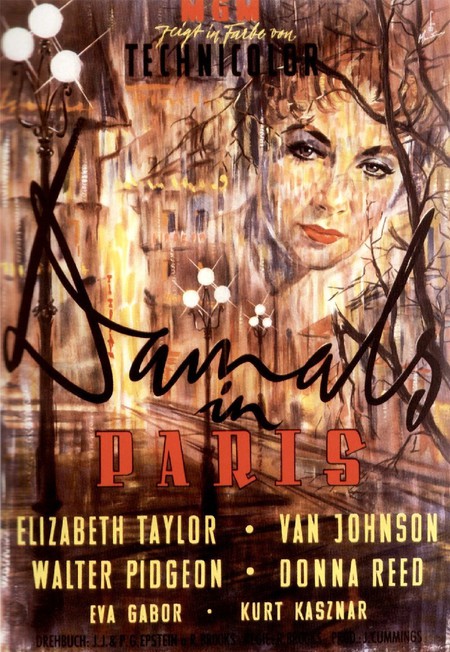 That being said, this rain-drenched advertisement for The Last Time I Saw Paris (1954), which was directed by Richard Brooks, portrays something honest about the capital’s melancholic side, which doesn’t only prevail in poor weather. It’s perhaps down to the fact that the film was inspired by the short story Babylon Revisited by F. Scott Fitzgerald, a long-time resident of Paris, that its poster is able to communicate something so truthful. 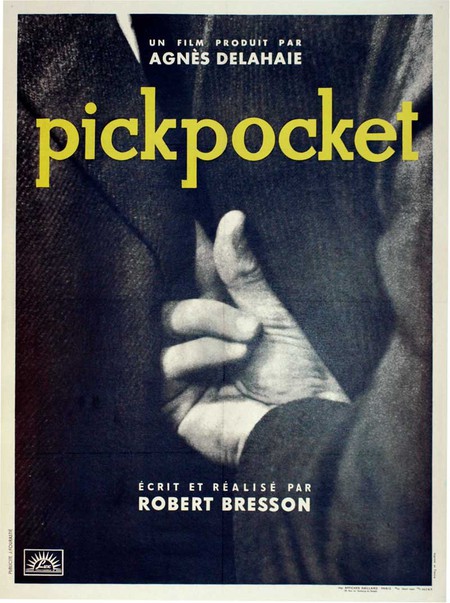 Robert Bresson’s Pickpocket (1959) is generally believed to be based on Dostoevsky’s Crime and Punishment, though it is still touted as the director’s first original screenplay, and his best work. In a way, it’s heartening to know that the suspicion inherent in this image, the kind directed at any unexpected contact or flash of movement on the metro, isn’t a wholly modern phenomenon. 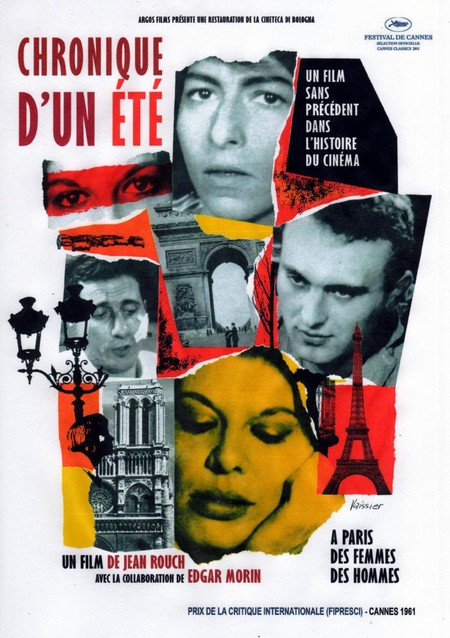 To sell their groundbreaking documentary, Chronique d’un été (1961), sociologist Edgar Morin and anthropologist-cum-filmmaker Jean Rouch created this surprising collage of Parisian life: it seems to be asking, ‘What more is this city than a jumble of grand relics and dispirited inhabitants with little relation to one another?’ The rough edges of its elements certainly suggest a significant disjuncture between the two and the impressions they’re likely to create. 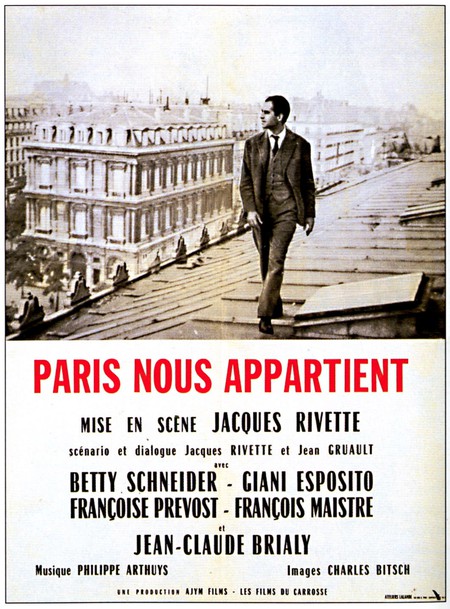 This poster for Jacques Rivette’s Paris nous appartient (1961) is nothing if not ironic. From the image of the leading man striding across the rooftop of the Théatre de la Ville, you’d really think the city belonged to him and his fellow actors. In reality, this is a film about paranoia in which the city looms large, intimidating those wrapped up in its many mysteries. Like the inhabitants of any big city, the question of ‘Who is owning whom?’ is never far from Parisians’ minds when they consider the city in which they live (and pay rent). 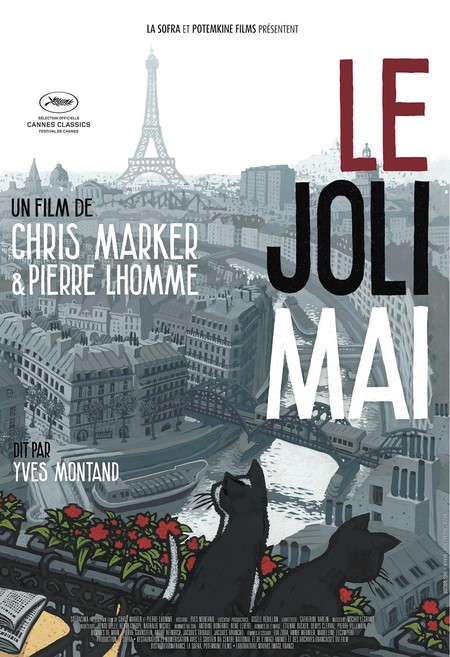 Chris Marker and Pierre Lhomme made Le Joli Mai (1963) in the spring of 1962, shooting 55 hours of footage of randomly conducted interviews in the streets of Paris. Simone Signoret prefaces the documentary’s search for the city’s identity, or essence, by saying: ‘It’s the most beautiful set in the world. And against this set, eight million Parisians act out a play or boo and hiss it. And, after all, it’s only they, the Parisians, who are able to tell us what makes Paris what it is… in this lovely month of May.’ Quite true. 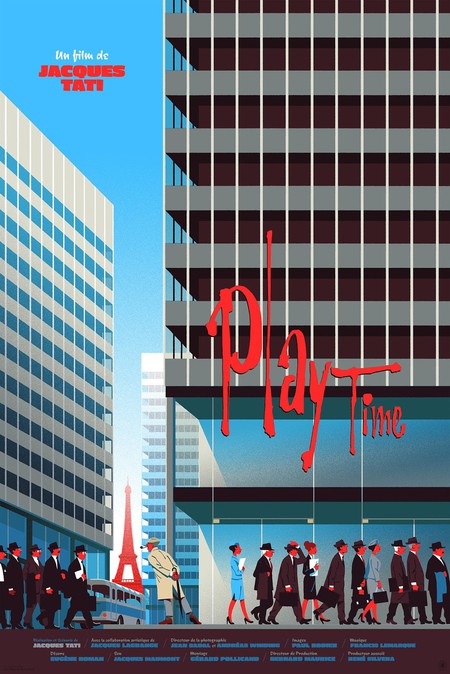 Director Jacques Tati revived his character Monsieur Hulot for his 1967 comedy Playtime in which he explores significant changes to the urban fabric of Paris and the French world of work. Today, the contrast between the playful script of the title and the rigid geometry of the architecture behind it in this poster serve, inadvertently or not, as a helpful reminder to non-Parisians that the city isn’t just a place for fun and games and romance but an engine of commerce just like New York, London, or Tokyo. 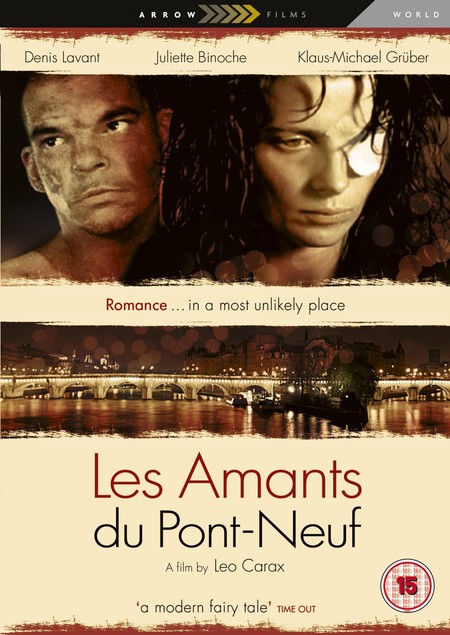 Paris is the City of Love, it’s an undeniable fact. But it’s equally true that the forms that love takes and the ways in which they are acted out are innumerable. Leos Carax’s Les Amants du Pont-Neuf (1991) is a testament to this. The two halves of its poster – one showing the lovers’ dirty, damaged faces, the other the lights of the bridge they call home glittering on the surface of the Seine – are like the reflections of a perverse pocket mirror, which when held up to Paris show it at once as the city of romantic fairytales and of broken dreams, where love nonetheless finds a way to survive. 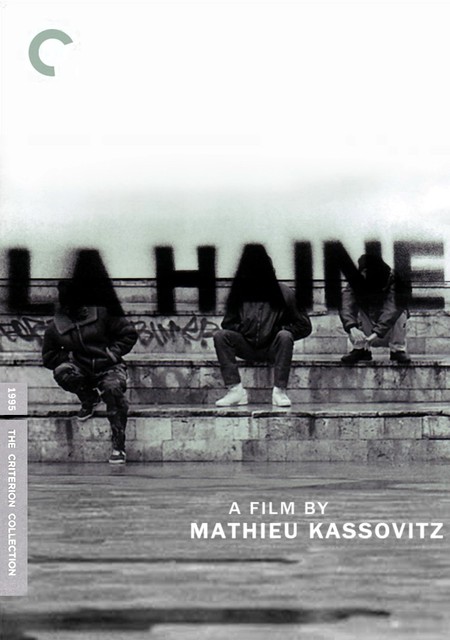 La Haine sent shockwaves through French society when it was released in 1995, a year of significant unrest and trauma for the capital. It represented the first time that the banlieue, and the young, disaffected men who live there, had been depicted in a mainstream film. This poster, as well as conveying the state of decay endemic to these parts of Paris and other major French cities, portrays how certain ‘undesirable’ characters had effectively been erased from discussion and marginalized. 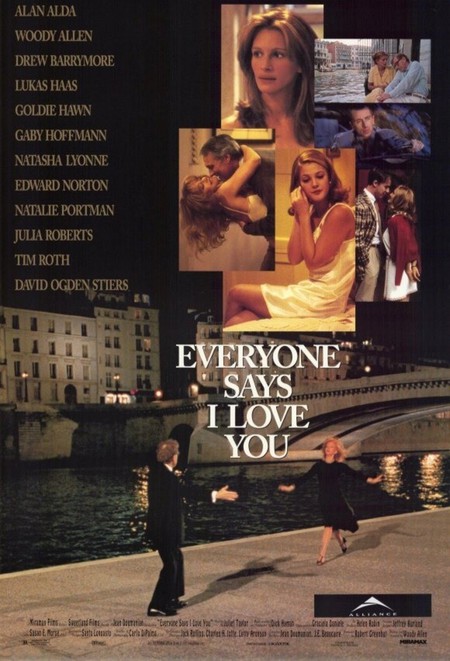 Everyone Says I Love You (1996) │ Courtesy of Miramax Films

This poster for Woody Allen’s Everyone Says I Love You (1996), a musical comedy with a sprawling ensemble cast, also set in New York and Venice, pretty much epitomizes the traditional American cinematic view of Paris: a playground where the rich (and white) can act out their romantic fantasies. The banks of the Seine can be lovely, a great place for an impromptu song and dance number, but they can also, and with much greater dependability, reek of urine to such an extent that you’d sooner throw yourself into the swirling murk of the Seine than hang around for a dip and a twirl, no matter how magical. 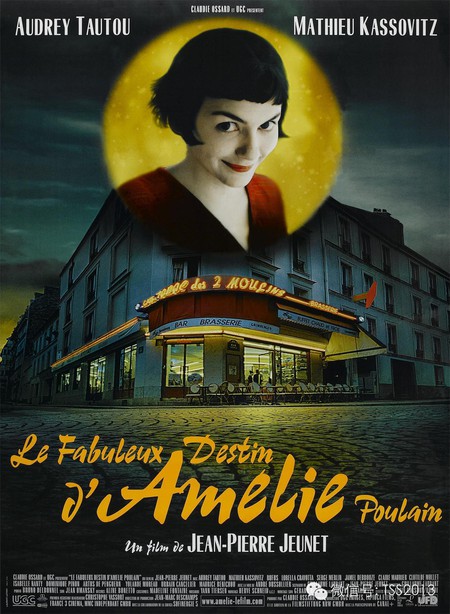 Jean-Pierre Jeunet’s Amélie (2001) is sort of the exception that proves the rule: a French film that wildly romanticizes life in the capital. Nevertheless, there’s something about this image, in particular the way the light from the café illuminates the cobblestones of Montmartre, as it does every night in real life, that speaks to the essential character of Paris. It is a place, for the moment at least, where if you look carefully enough, you’ll find small cracks in the homogeneity of modern life in which the weird and wonderful can exist. 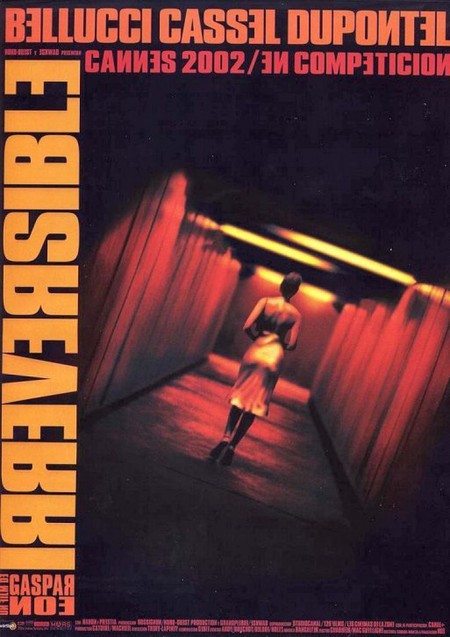 Gaspar Noé’s Irréversible (2002), which stars Monica Bellucci, Vincent Cassel, and Albert Dupontel, is perhaps a film as far away from Amélie in terms of mood and tone as it’s possible to get. Described by a prominent American film critic as ‘a movie so violent and cruel that most people will find it unwatchable,’ it is a psychological horror drama that pushes the conception of an evil, inherently dangerous Paris to its limit. This poster, with its Satanic palette and disorienting typeface, is that version of the city’s purest distillation. 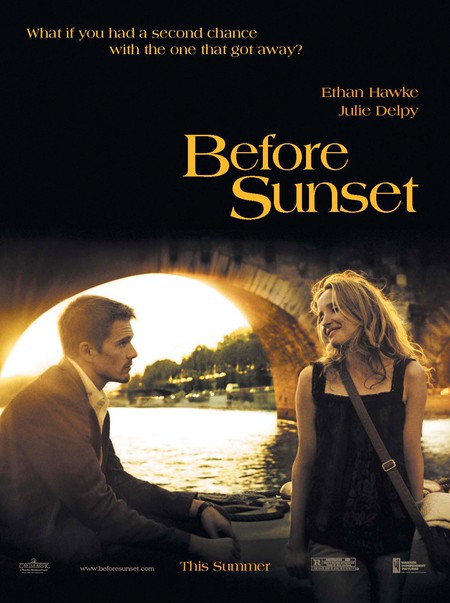 Ah, thank goodness, some soft lighting and haloed film stars! In fairness, Richard Linklater’s Before Sunset (2004) actually has a fair amount of emotional complexity to it that this poster doesn’t do justice to. And if Paris does have any of the superpowers typically associated with cupid, they are contained within its sunsets, which when they hit the city just right, turning the river to gold and the buildings to bronze, have a way of melting the heart of even the steeliest cynic. 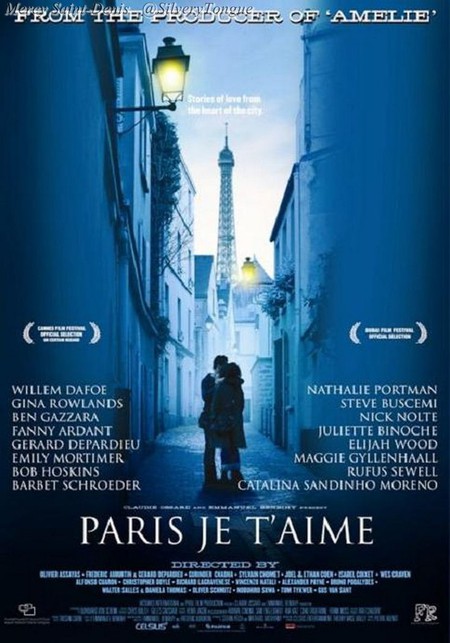 Continuing the theme of, ‘it’s impossible to walk down the street in the French capital without falling head over heels in love,’ is Paris, je t’aime (2006), an anthology of 18 short films by renowned directors primarily from the United States but also France and numerous other countries. This poster at least has the decency to depict the last-seconds-before-dawn-down-an-alley kind of romance that most experience after a night of heavy drinking and that doesn’t last much beyond sunrise. 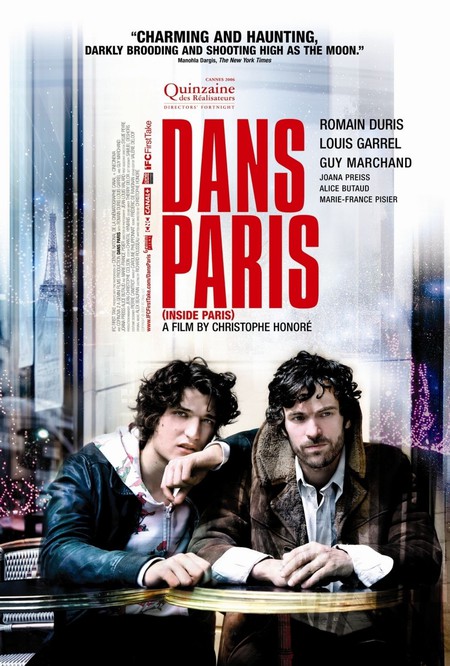 What is Paris if not a couple of handsome, broody-looking blokes with impeccably tousled hair hanging out on a café terrace? Seriously? Dans Paris (2006), which stars Romain Duris and Louis Garrel and was directed by Christophe Honoré, is genuinely a great film about heartbreak and brotherhood and this poster does portray with stunning accuracy what some consider to be ‘Le Parisien’. 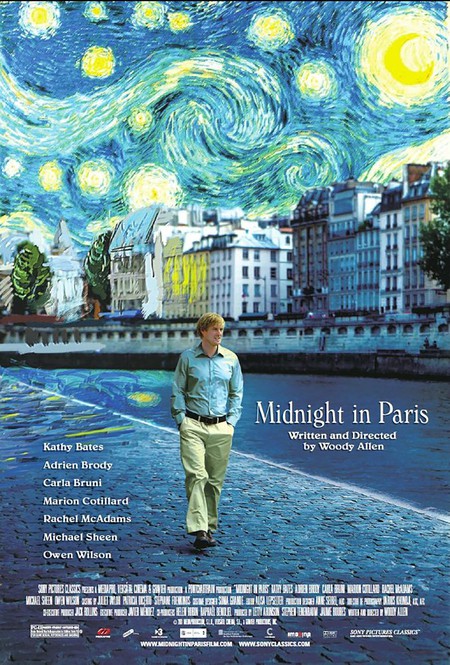 Not quite contented with his work in Everyone Says I Love You, Allen had another crack at bringing out the essence of the French capital with Midnight in Paris (2011). Again, this poster of the blonde, Seine-side wanderer shows the city as a dreamscape. For him, Paris belongs to the realm of imagination, not to real life, real people, and their real miseries. 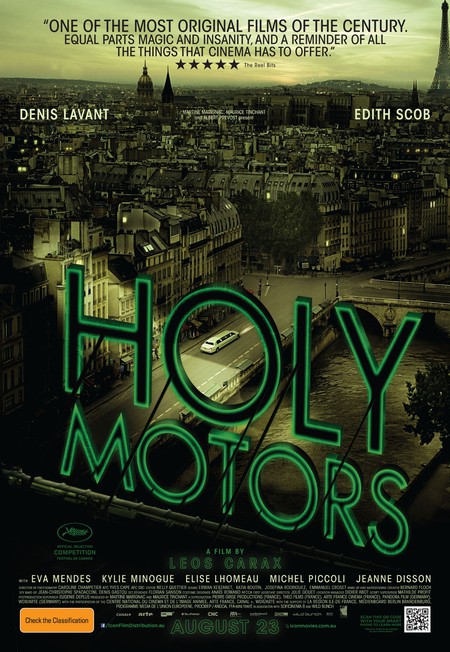 Another film from Leos Carax, Holy Motors (2012) brings to life a fantasy Paris very different to Allen’s, closer to how one might imagine Tim Burton’s or Gullermo del Toro’s. And while its distinctive green tinge might be foreign to the Eiffel Tower or Haussmannian apartment blocks, it should still be immediately recognizable to any Parisian worth their salt: it’s the dirty fish bowl tint of the Paris metro.