Fig starter | © L’Entrée des Artistes
A wave of gentrification has been sweeping through Paris for some time, especially the 10th, 11th and 20th districts, bringing the charm of a once working class culture into 21st century trends. Here’s our round-up of some little-known quirky places you should visit – restaurants, bars, theatres, hotels and music halls – before prices are swept beyond recognition. 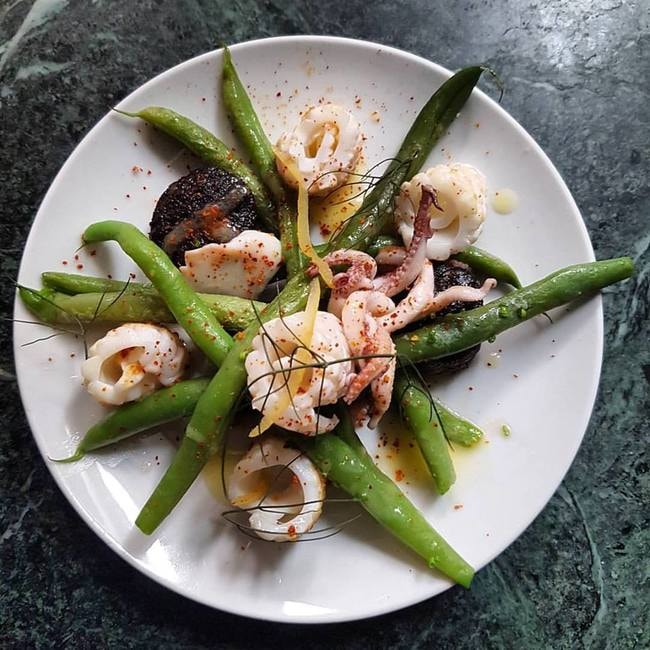 The menu is updated weekly and in line with seasonal food produce, and it’s reasonably priced for the attention to detail in the presentation and artistic vibe that accompanies the experience. For no more than €35 you’re sure to be able to delight in a mouth-watering starter, masterpiece-arranged main course – almost too perfect to eat – and dessert. 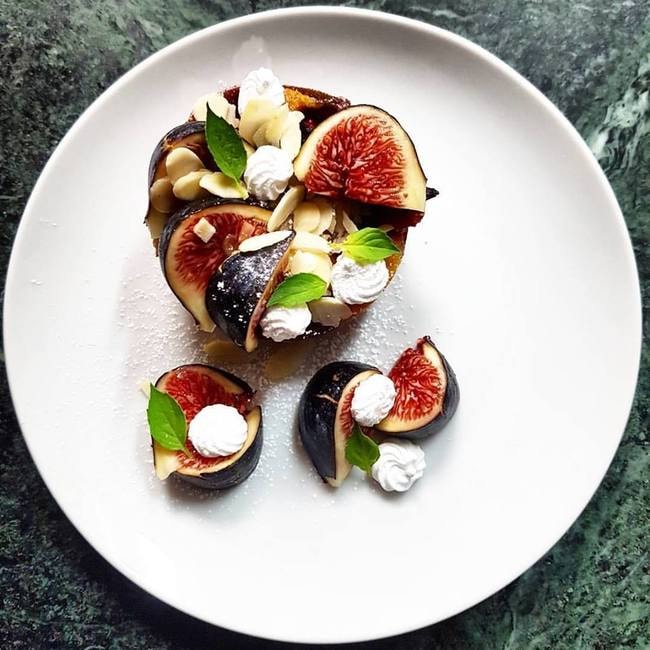 There’s an artistic focus too with a jazz club particularly fond of playing disco soul, and a dance floor where vinyls are spinning til 5am each weekend. The restaurant is in Pigalle, an area that’s worked up a bad reputation over the years, so doesn’t get many tourists, explaining why it can serve top-notch food arranged like fabulous works of art (Insta-perfect) and at pretty modest Parisian prices.

Hotel
The Best Western Saint Martin Bastille is a 3-star artsy hotel located in the 11th district of Paris – between the Bastille, the Saint-Martin canal, the Place des Vosges and the Marais. It’s perfect for hip, young people seeking a short break. The hotel is very up-to-date and willing to promote urban art; one thing you should check out is their ‘Street Art’ rooms (which is everywhere in this area of Paris). The rooms are unique in that they’re a gateway to art and creativity, with the owners working hard to ‘thrill your pupils, open your eyes on a new aesthetic universe’, a challenge they take up with enthusiasm. One hundred euros split between two people will easily get you a fabulously street art designed, spacious double room to share for the night, pretty much on par with the price of many Parisian hostels.
More Info
Open In Google Maps
114 Boulevard Richard-Lenoir, Paris, Île-de-France, 75011, France
+33143382929
View menu
Visit website
Visit Facebook page
Send an Email
Give us feedback

Theatre
Tartuffe | © Marcel Hartmann
This little-known theatre sells tickets for immaculately designed theatre shows starting at just €12. Of course, you’ll also find ticket prices of theirs that go up to €60, but with a stage-set that looks as though it’s walked straight out of a film, paying €12 is a bargain.Their current masterpiece showing is Moliere’s Tartuffe (he’s the French equivalent of Shakespeare). With lavish costumes, pristine make-up and elaborate settings, it feels like you’ve taken a trip to BBC Four’s Versailles TV series in terms of attention to visual detail.There’s a brilliant deal going at the moment where people aged under 26 can grab a ticket for €10 – make sure to bring photo ID to be eligible.
More Info
Open In Google Maps
20 Boulevard Saint-Martin, Paris, Île-de-France, 75010, France
+33142081850
View menu
Visit website
Visit Facebook page
Send an Email
Give us feedback

Juice Bar, Vegan, Vegetarian, $$$
Bob’s offers a delightful detox through fresh juices, honest-priced veggie sandwiches served on homemade bagels, and delicious soups and salads. It has one of the most varied vegan options in the city, with dishes from €5.50 to €6.50, and desserts from €2 to €3.50.
More Info
Open In Google Maps
15 Rue Lucien Sampaix, Paris, Île-de-France, 75010, France
+33950063618
View menu
Visit website
Visit Facebook page
Send an Email
Give us feedback

Hotel
Le Chat Noir | © Wikimedia Commons
ReserveRead More
At the foot of Montmarte, only a stone’s throw away from the world famous Moulin Rouge cabaret, the Chat Noir hotel is the perfect base from which to discover Paris. It’s a must-see – slightly more expensive than the other hotels – but with a rich history behind its name. Le Chat Noir originally opened on November 18, 1881 at 84 Boulevard de Rochechouart by the impresario Rodolphe Salis, and is thought to be the first ever modern cabaret.It’s surrounded by a whole host of shops in the rue Lepic and cafés (now famous from Amélie Poulain’s film), in the shadow of the iconic Sacré-Cœur. The district – that was once a real working class neighborhood, attracting artists with its dirt-cheap rent – is now bursting with trendy bustle and excitement, offering an array of theatres and live music events.
More Info
Open In Google Maps
68 Boulevard de Clichy, Paris, Île-de-France, 75018, France
+33142641526
View menu
Visit website
Visit Facebook page
Send an Email
Give us feedback

Bar, Brasserie, Restaurant, French, $$$
La Fine Mousse’s artisan beer is plentiful and varied, with more than twenty tastes lovingly selected by the craft beer expert owner, and the food is fabulous with a few unexpected twists. They even have atelier workshops once a month where amateurs de vin et gastronomie can learn about their chosen delights, and at a reasonable price granted the artisan quality.
More Info
Open In Google Maps
4 bis Avenue Jean Aicard, Paris, Île-de-France, 75011, France
+33148064094
View menu
Visit website
Visit Facebook page
Send an Email
Give us feedback

Casino
In the 11th district, Nouveau Casino is a buzzing concert venue and nightclub with a particular passion for underground music. You’ll hear booming tracks from its large sound system played by an exciting DJ line-up – past bookings have included Diplo and M.I.A. – taking you right through to 6am in a cool decor for €8. Make sure to book in advance.
More Info
Open In Google Maps
109 Rue Oberkampf, Paris, Île-de-France, 75011, France
+33143575740
View menu
Visit website
Visit Facebook page
Send an Email
Give us feedback

Theater
Von Braun and Callas from Sex Assets and Waste Management at the Alhambra, Paris, France - Überlove Wolrd Tour | © Wikimedia Commons
This Art Déco-style music hall lays claim to some famous names having graced its stage – but before they became well-known. Lady Gaga ranks among these figures, and has since paved the path for a stream of artists (both up-and-coming but also established) to show their eagerness to perform at this prestigious, albeit-little known, music hall.You can expect to find a range of music from pop-rock, slam, chanson française to jazz and even heavy metal. The venue takes between 600 and 800 people, making for an atmospheric experience. Nested in the increasingly trendy Canal St-Martin area, its off-the-radar spot is what keeps the prices low for now.
More Info
Open In Google Maps
21 Rue Yves Toudic, Paris, Île-de-France, 75010, France
+33140204025
View menu
Visit website
Visit Facebook page
Send an Email
Give us feedback

Hotel
ReserveRead More
Hotel des Pyrénées is a cheap and fabulously located hotel in Paris’s 20th district, just 400 metres from the charming Parc des Buttes Chaumont. The location is a great choice for travellers interested in monuments, museums and city walks – slightly out of the tourist-trap – and for anyone set on visiting the famous Père-Lachaise Cemetery located 1.5 km away. Canal Saint-Martin is a 15-minute walk from the hotel making for a calm exploratory stroll, and rooms are clean and well-sized by Paris standards.
More Info
Open In Google Maps
399 Bis Rue des Pyrénées, Paris, Île-de-France, 75020, France
+33143664818
View menu
Visit website
Visit Facebook page
Send an Email
Give us feedback

Hostel
Les Piaules is situated in Belleville | Courtesy of Les Piaules / Hotels.com
ReserveRead More
Whether its craft beer or homemade lemonade you’d like to try, or rather dip into a selection of French cheese with a glass of Bordeaux in the cosy chimney lounge, this hostel and bar really is the place to drop by. While the general surroundings might seem a little run-down at first glance – stepping off the metro to dusty graffiti makes for a curious clash with the metro station name ‘Belleville’ (beautiful city) – you’ll be welcomed by cheap prices and a friendly space to chill on their hidden rooftop. There are live music events and always plenty of young foreign traveller bustle, proving that this is worth a visit.
More Info
Open In Google Maps
59 Boulevard de Belleville, Paris, Île-de-France, 75011, France
+33143550997
View menu
Visit website
Visit Facebook page
Send an Email
Give us feedback
Give us feedback