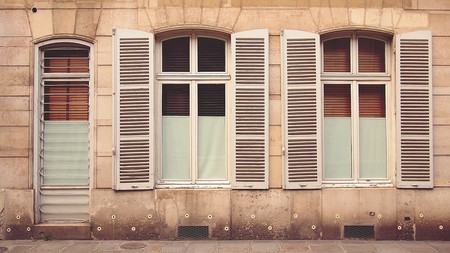 With the huge number of cultural spots offered in Paris, it’s incredibly hard to define where to go first. So how do you connect all the dots to make an intriguing and fluid path? Here is our where-to list that will help you explore incredibly uncommon places on the less-beaten tracks of Paris’ 5th and 13th arrondissements! 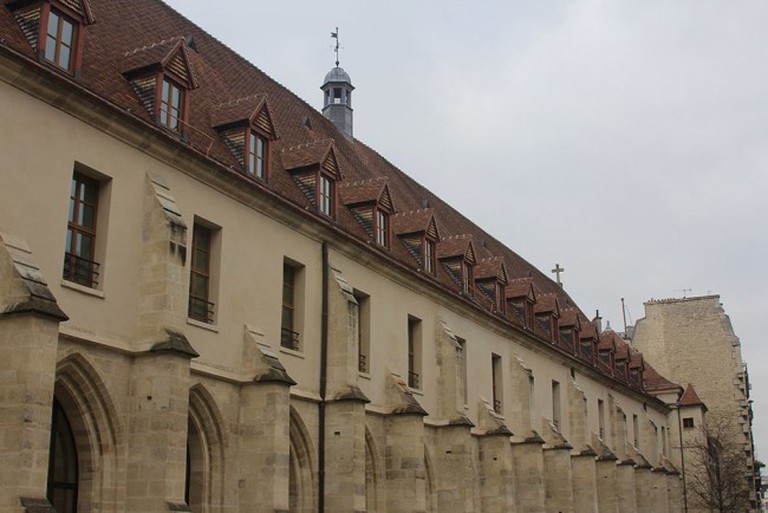 Collège des Bernardins | © Beatriz Forti
The Collège des Bernardins is a hidden gorgeous construction that was built by a British monk in 1245 and once served as a place for study and research of philosophy and theology. Now, the ancient school is used to house cultural events that vary from art exhibitions to concerts. It has a library with 15,000 volumes, two auditoriums, a multi-purpose room and a garden, all areas brimming with diverse activities!
Open In Google Maps
20 Rue de Poissy, Paris, Île-de-France, 75005, France
+33153107444
Visit Website
Give us feedback

Located on the left side of the river Seine, the Institut du Monde Arabe, a museum, was built in 1987 by the French architect Jean Nouvel. He created a modern version of the Mashrabiya – a natural ventilation system used in the traditional architecture of the Arab countries, where the reduction of the surface due to the latticework accelerates the passage of the wind. As the name suggests, the institute showcases Arabic culture and has both temporary and permanent exhibitions, meetings and debates related to the main subject. If you’re looking to add a culinary voyage to your cultural day, the Institut is home to three restaurants where you can indulge in Arab specialties such as mezzes, tajines and other delightful flavors. One of the restaurants, Le Zyriab, is placed on the rooftop of the building and has a delightful view of the Notre Dame Cathedral and the rest of the city!
Open In Google Maps
1 Rue des Fossés Saint-Bernard, Paris, Île-de-France, 75005, France
+33140513838
Visit Website
Visit Facebook page
Give us feedback 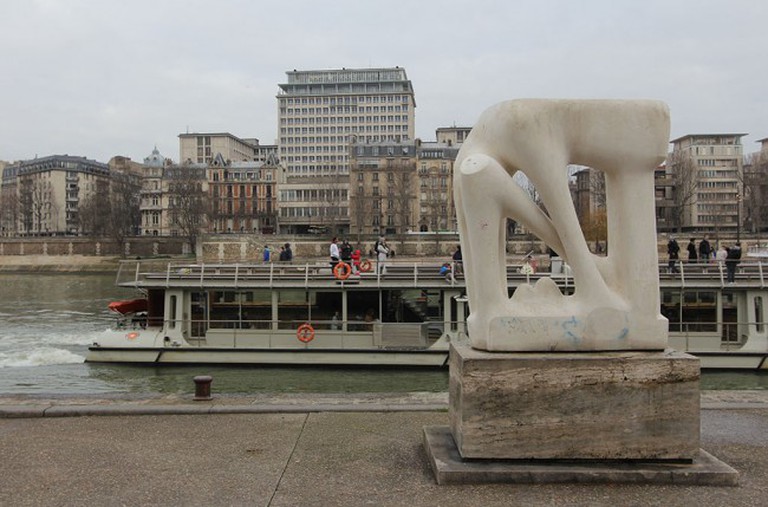 Musée de l'Esculpture en plein air | © Beatriz Forti
The Musée de la sculpture en plein air is an open cultural space by the riverbanks with more than 35 sculptures from the second half of the 20th century. They are displayed in the Tino Rossi garden, which was opened in 1980 as part of the Museums of the City of Paris. It is located between the bridges De Sully and D’Austerlitz, a tempting place for a promenade or a picnic.
Open In Google Maps
11 Bis Quai Saint-Bernard, Paris, Île-de-France, 75005, France
Give us feedback

Paris has several parks and gardens, and if you are an absolute nature lover, this one must be on your list of places to discover. The Jardin des Plantes was created in 1626 with the purpose of housing several medicinal plants and has more than 23 hectares of big botanical gardens, running tracks, a mini zoo and a museum with four separate galleries: the Evolution Gallery, the Mineralogy Museum, the Paleontology Museum and the Entomology Gallery. Being France’s most vast botanical garden, you will be surprised to see the diversity of non-native plants that the place conserves.
Open In Google Maps
57 Rue Cuvier, Paris, Île-de-France, 75005, France
+33140795601
Visit Website
Give us feedback 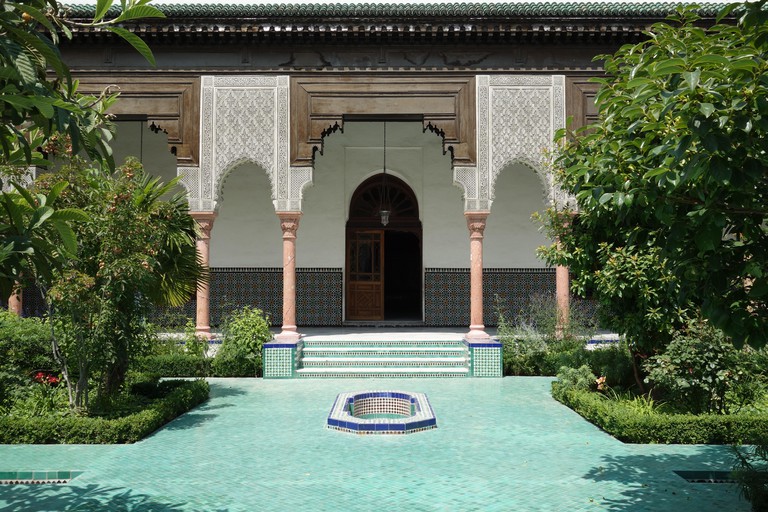 Immerse yourself in tranquillity at the Grande Mosquée de Paris | © allOver images / Alamy Stock Photo
Inaugurated in 1926, the Grande Mosquée de Paris is the oldest mosque in France’s metropolitan area. It was built after World War I to honor the 70,000 Muslims who battled for France and was used as a place of resistance during the Second World War. Inspired by Alhambra, in the south of Spain, it was built in Hispano-Moorish style, which can be identified in the patios and gardens surrounded by carved arches and mosaics – it’s incredible to admire all the details! Seen from a distance, the 33-meter-high, engraved tower catches the attention of all visitors on their way to the prayer hall – with its magnificent carpets or the hammam – that is open to those who are looking to relax. Make a stop in the tea room, charmingly decorated with blue mosaics, where they serve a variety of heavenly traditional desserts! If you’re looking for something more replenishing, drop into the Aux Portes de l’Orient restaurant and try their delicious couscous and tagine. End this trek in their quaint boutique that recalls the markets of Maghreb: Souk!
Open In Google Maps
2bis Place du Puits de l'Ermite, Paris, Île-de-France, 75005, France
+33145359733
Visit Website
Give us feedback 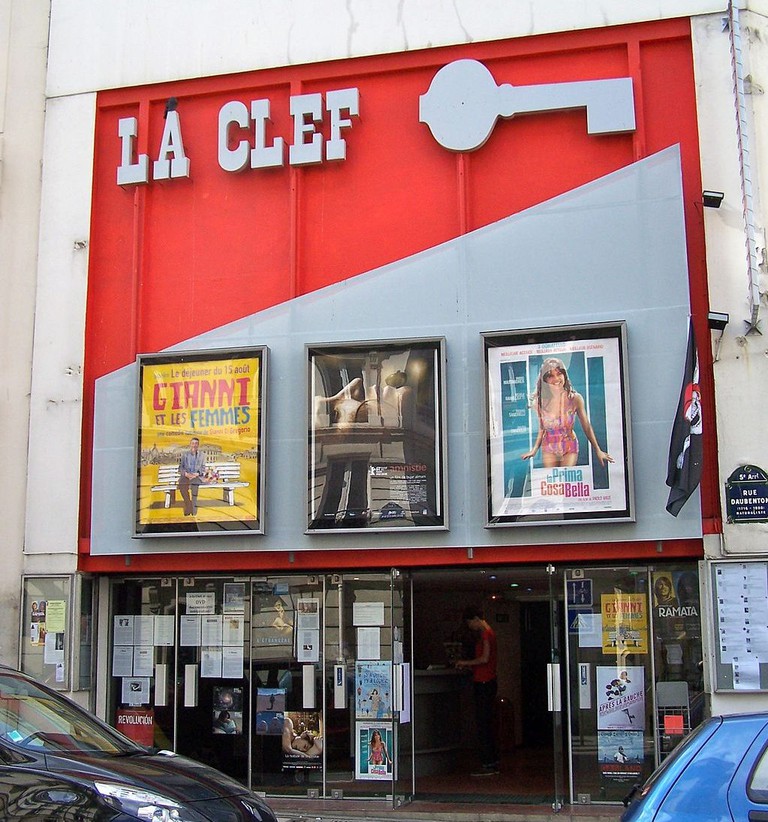 Cinéma la Clef | © LPLT / Wikimedia Commons
In a city where many movie theaters have closed or have been transformed, the 5th and 13th districts of Paris strive to keep a considerable number of its original cinemas. Situated in a small block in the 5th, La Clef is a small cinema that opened in 1969 – one year after the revolution of 1968 in Paris – and became known as a place committed to the promotion of independent and politically engaged films. In 1981, it was sold to a private company and transformed into a cultural center. After further modifications, in 2010, it was established as what it is today: two rooms that display an interesting selection of movies, several debates, thematic cycles and festivals, still focused on distributing socially engaging films. La Clef is of particular interest if you’re into discovering less distributed productions from countries such as Iceland, Guatemala, Brazil, Greece and more!
Open In Google Maps
34 Rue Da ubenton, Paris, 75005, France
+33953483054
Give us feedback 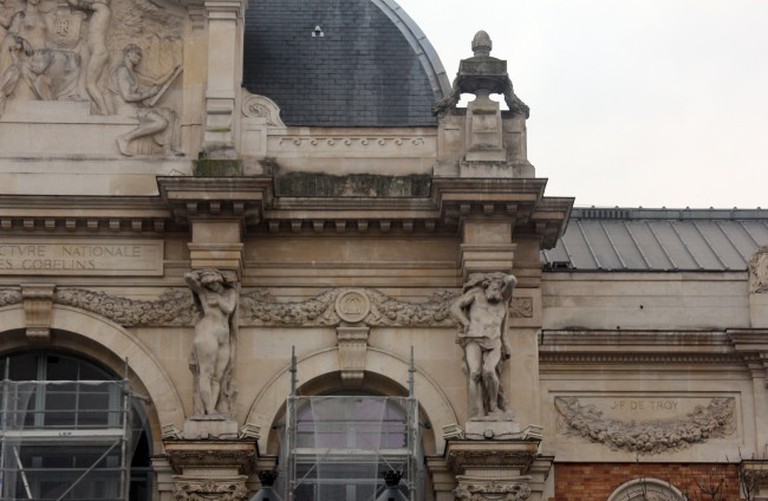 Manufacture de Gobelins | © Beatriz Forti
Something typical and really important in Europe is the tapestry that was created in the third century B.C. in Greece, but it was in Western Europe during the 14th century that it reached a new stage. Produced in Germany, Switzerland, the Netherlands and France, it was in the latter where it got the highest acknowledgment. Tapestries can be found in sites like Bayeux, Vallée de la Loire, Beauvais, Musée de Cluny and at the Manufacture de Gobelins.At the beginning, the subjects featured were mainly Biblical or mythological, but the French kings and princes frequently asked the weavers to develop tapestries to promote their political campaigns, depicting them with epic subjects through scenes of hunting, battles and victories. It was in 1667 that the Manufacture des Gobelins –called Royal Factory of Furnishings to the Crown – was founded, accounting for almost all the royal craftsmen and artisans. The industry traced the political evolution of the country, with all the important dates, including the celebration of Napoleon to his reign. Visits can be made individually or guided if you’d like to learn more about this magical art form!
Open In Google Maps
42 Avenue des Gobelins, Paris, Île-de-France, 75013, France
+33144085349
Visit Website
Give us feedback 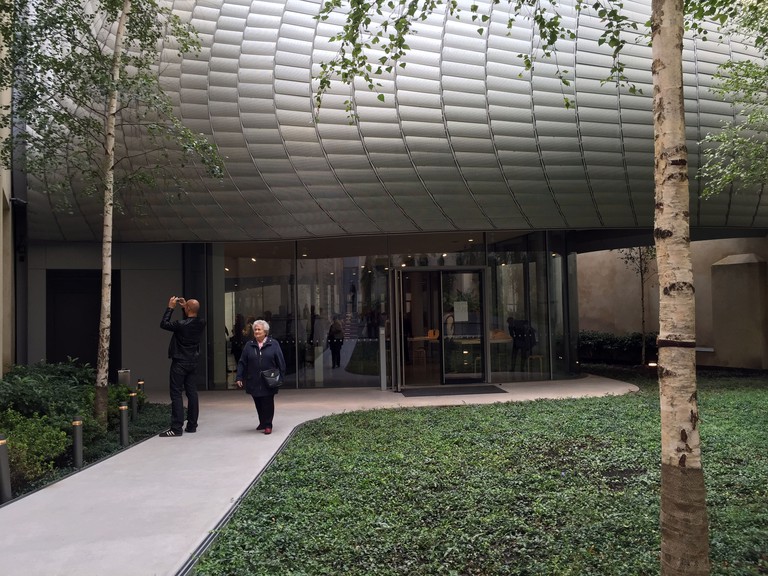 Fondation Jérome Seydoux Pathé | ©Beatriz Forti
Pathé was a French film production company founded in 1896 by four brothers who began selling phonographic devices and producing a huge amount of films. Around 1904, they were responsible for 30-50 percent of the movies projected in Europe and the USA. In 1918, the industry entered a relative decline, and after several partnerships, stock sales and associations, the Pathé company struggled to reconstruct the dismantled empire. The proof of it is the Fondation Jérome Seudoux Pathé, created in 2006 by the president of the Gaumont-Pathé cinemas, whose goal is to preserve and make public the historical heritage of the Pathé company. The new headquarters was placed on the site of the ancient cinema Le Rodin and was designed in 2014 by the Italian architect Renzo Piano who developed a glass shell covered with wood and steel solar shutters behind the preserved façade of the Rodin from 1869. Numerous activities take place such as guided visits, silent movies, exhibitions, and even research documenting the history of the cinema.
Open In Google Maps
73 Avenue des Gobelins, Paris, Île-de-France, 75013, France
+33183791896
Visit Website
Give us feedback 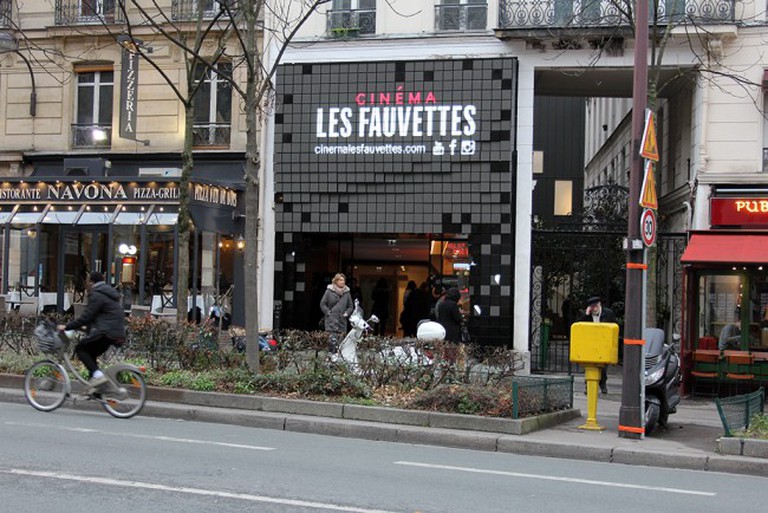 Cinema Les Fauvettes | © Beatriz Forti
After one and a half years of restoration, the movie theater Les Fauvettes reopened its doors in November 2015. In 1900, it was opened as a dance hall, and it wasn’t until 1903 that it started operating as a movie theater – which improved through the years, adapting to the audience’s demand. The main purpose of the restored cinema is to promote famous restored movies, such as Tarantino’s Pulp Fiction, Playtime by Jacques Tati, Cléo de 5 à 7 by Agnès Varda, and many others. It’s a unique opportunity to live by their philosophy: ‘Restored versions, intact emotions!’
Open In Google Maps
58 Avenue des Gobelins, Paris, Île-de-France, 75013, France
+33892696696
Visit Website
Give us feedback 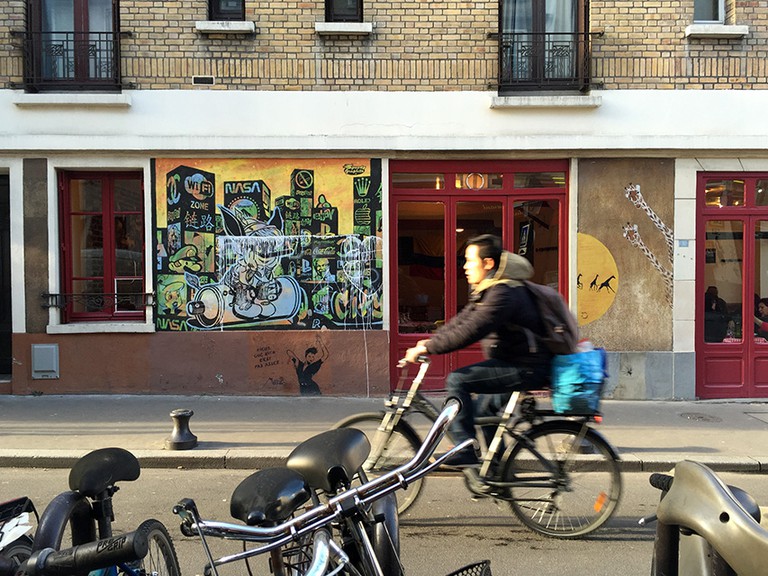 La Buttes-aux-Cailles | ©Beatriz Forti
Located in the 13th arrondissement, La Butte-aux-Cailles is a small neighborhood full of history and culture! It was only in 1860 that the area became part of Paris, after they demolished the ‘Farmer’s Wall,’ which was used to charge fees for those entering the city. Initially it was a hill with several windmills, and because of its limestone quarry, it has been impossible to make heavy buildings, resulting in an attractive petit village, with cobbled streets, trees and graceful houses. You can also find one Paris’ first swimmming pools, built in 1924 in an Art Nouveau style – which announces the arrival of the new style: Art Déco. Nowadays, the area is known for its lively bars and restaurants and became a place of creation for many street artists who’ve covered the walls with artistic expression. Wandering the streets and discovering the charm of this little neighborhood is an absolute must for the urban explorer!
Open In Google Maps
Paris, France
Give us feedback

One of the 39 swimmings pools in the city, the Piscine Josephine Baker was opened to the public in 2006, just after the summer event, Paris Plages –when the banks of the river Seine recall real beaches with white sand. The uniqueness of this pool is that it’s a floating one – supported by 20 metal floats at the border of the river. With a glass and steel structure, the roof can be removed to become an outdoor swimming pool – perfect to enjoy the summer days in Paris, with a great view of the river and its surroundings!
Open In Google Maps
Quai François Mauriac, Paris, Île-de-France, 75013, France
+33156619650
Visit Website
Give us feedback

The origin of the Biblioethèque Nationale de France dates back to 1368, being the king’s library and placed at that time in the Musée du Louvre.After many shifts, a constantly growing collection, a gain in relevant volumes and political issues, it finally regained its prestige with the construction of the new library in 1996 by French architect Dominique Perrault and commissioned by former president François Mitterrand. It has 365,000 square meters of collections and a total of 11 million printed books, in addition to reading rooms, meeting rooms, and a wide offering of exhibitions throughout the year.
Open In Google Maps
Quai François Mauriac, Paris, Île-de-France, 75706, France
+33153795959
Visit Website
Give us feedback
Give us feedback