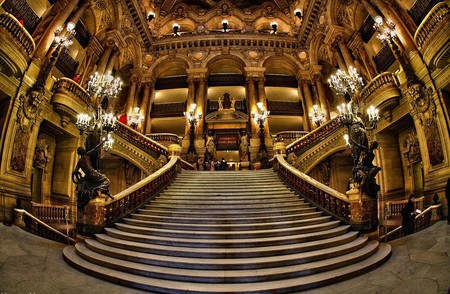 Before its opening on January 5, 1875, the Palais Garnier had witnessed the fall of an empire and rise of a (third) republic. During its 14-year build, it was endowed with sculptures by Aimé Millet, Charles Gumery, and Eugène-Louis Lequesne and became a blueprint for public works like the Thomas Jefferson Building at the Library of Congress. In the 14 decades since, it has inspired these 11 works of art, fiction, and interior design.

Technically, Baudry finished his ceiling before opening night so it’s a bit of a cheat to include it on this list but what a scandal it would have been to leave it out: just look at it! The mural is the crowning glory of the Grand Foyer, a 154-meter long, 13-meter wide, and 18-meter high corridor that was intended as a drawing room for Parisian high society. Indeed, it was Baudry’s murals that solidified his artistic reputation, not least these depictions of moments in the history of music. The rectangular panel to the left is entitled Music and the oval is Comedy. 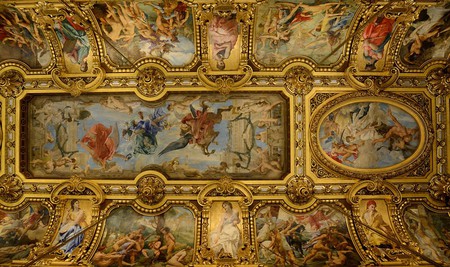 Part of the ceiling by Paul-Jacques-Aimé Baudry (1828–1886) in the Grand Foyer at the Opéra Garnier, Paris │ | © Peter Haas / Wikimedia Commons

Degas’ fascination with dance and, specifically, ballet, intensified during the 1870s and the Palais Garnier gave him rich grounds for research. By the end of his life in 1917, he’d produced more than 1,500 works on the subject, all of which explored the movement and discipline of the human body, rather than the character of its possessor. One of the best examples of this part of his oeuvre is Ballet at the Paris Opéra (1877). Created with the rare monotype technique and delicate pastels, it depicts a rehearsal rather than a performance as commonly thought, as suggested by the dancers’ loose hair and random placement.

His rendering of the Palais Garnier’s main staircase is one of his most cherished works as are those of the 1889 Exposition Universelle. An interesting footnote to his life is that he discovered the August 22, 1911, theft of the Mona Lisa. He’d arrived to paint the room in which it hung only to find four iron pegs in its place! 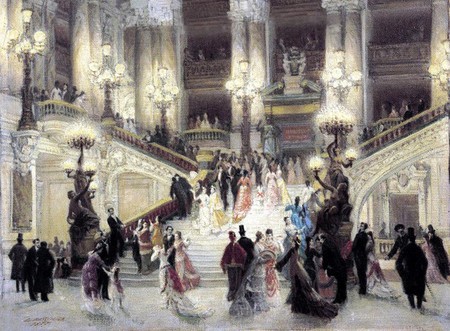 Famously, and fabulously, the Palais Garnier was designed with people watching in mind. Its stairwells, foyers, and hanging boxes were all intended to give its visitors as good a view of each other as the artistry taking place on the stage. The 19th century also brought greater social integration and mobility, substantially enriching the smorgasbord of humanity on view. The Impressionists wanted to capture this phenomenon and the American Mary Cassatt arguably did it best with her Woman in Black at the Opera (1879). The chap in the background is in danger of going overboard for a good ogle! 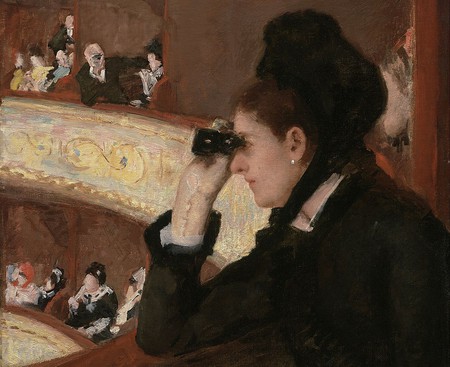 The spirit of extravagance now associated with the Belle Époque, the era between the Second Empire and World War I, is evident here. The Palais Garnier is an obvious inspiration for the decoration in Hermans’ monumental painting but the scene could easily have played out in the grand halls of his native Brussels or another major European capital of the day. These pre-Lenten festivities allowed women without a family name to move up in the world and those with one to let their hair down behind a shield of anonymity. Like Cassatt’s, Hermans’ work was an astute piece of social commentary. 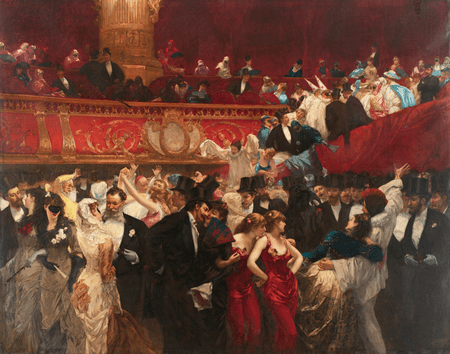 The best-known artistic work inspired by the Palais Garnier, Gaston Leroux’s serialized novel of 1909 and 1910 tells the story of a disfigured gentleman, Erik, who lives in the bowels of the Paris Opera and falls obsessively in love with the talented young singer, Christine. It was inspired by an accident on May 20, 1896, in which a chandelier’s counterweight broke loose, killing an audience member and an urban legend involving the use of a real skeleton in an 1841 production. The 1986 musical adaptation remains the longest running show on Broadway by some margin and the story has twice been adapted for the screen. 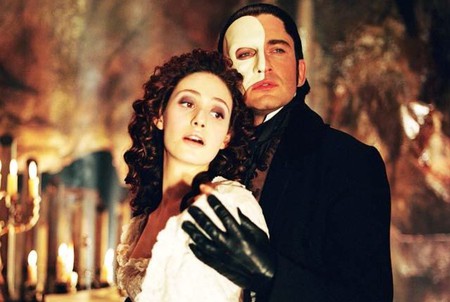 Of all the creative outputs on this list, the most closely associated with the work of the opera is undoubtedly that of Léon Bakst, a genius of costume and stage design. Between 1909 and 1924, he was the main collaborator of the Ballets Russes and the Paris Opera, producing masterpiece after masterpiece, including his collections for Cleopatra (1909), Scheherazade (1910), and Le Spectre de la Rose (1911). A ‘magician of colors’, he revolutionized stage design and influenced the fashion industry and decorative arts. A part-time teacher, one of his favorite students was Marc Chagall, who later made his own mark on the opera. 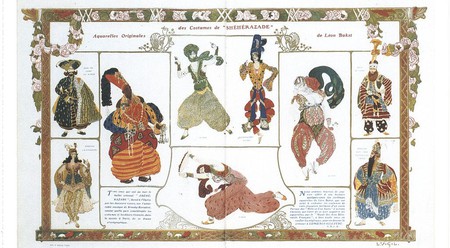 For the worlds of aristocracy and intelligentsia contained within Proust’s In Search of Lost Time (1913–1927) there was no finer venue than the Palais Garnier. Still, decades after opening, the opera was the central point of Parisian society. Indeed, it was here that Proust spent many an evening enjoying the illustrious company and soaking up their idiosyncratic wants and ways that he would so carefully recreate in his novels. Of the building, he described the viewing boxes as ‘suspended petits salons’, where, no doubt, his subjects seemed perfectly at home, as was he in his observation of them. 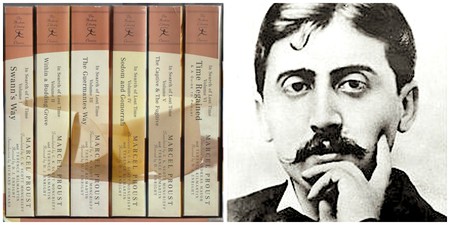 Critics were numerous and extremely vocal when André Malraux announced that Marc Chagall, a modernist and foreign-born painter, would be replacing the ceiling of the Palais Garnier’s main hall. However, eight months, 440 pounds of paint, and 2,600 square feet of canvas later, they were silent and the audience were cheering when it was unveiled on August 31, 1964, in the final bars of Mozart’s Jupiter Symphony. The removable piece, which was created in an aircraft hangar in the Parisian suburb of Meudon that remains an important locus for innovative artists, depicts scenes from the operas of 14 famous composers. 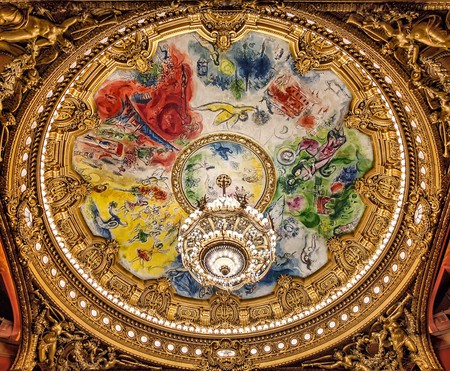 Imagine you’re an architect who’s been given the job of designing a brand-new restaurant inside one of the most visited buildings in one of the most visited cities in the world. Happy times, no? Now imagine there’s a caveat: you must not touch any of the building’s original walls, ceiling, or columns. Not so great. But Odile Decq, like a true creative genius, rose to the challenge and designed a restaurant inspired not by the building by one of the artworks it begot. Her white mezzanine, like a phantom, ‘is sliding in space but not touching space’ while the red velvet ties with the traditional upholstery. 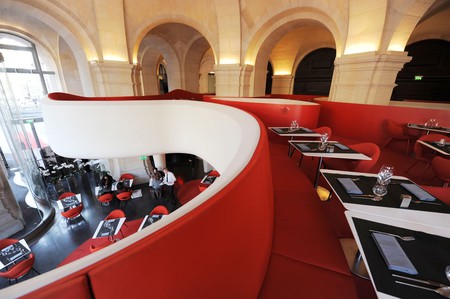 As part of his Inside Out Project, the acclaimed street artist and photographer JR has collaborated extensively with ballet dancers, from NYCB and the Palais Garnier. In a shoot from 2014, he took 40 of the dancers to the rooftop of the latter, which offers sensational views across Paris of all its most famous landmarks, and had them dance 180 feet above the ground. The remarkable pictures, which you can see on his Instagram, show the opera building from an entirely original perspective while still honoring the profession and art form that has made it such a beloved institution.