The 10 Unmissable Works to See at the Courtauld 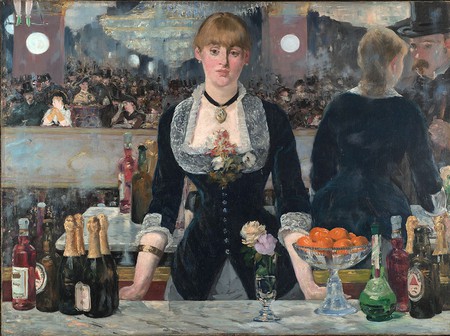 The Courtauld is renowned for its exceptional collection of Impressionist and Post-Impressionist art, including masterpieces by Renoir, Cézanne and Manet. The gallery also houses incredible works from throughout European art history, from Botticelli to Modigliani. Here are ten of the must-see pieces on display.

As well as being one of Manet’s finest works, ‘A Bar at the Folies-Bergère’ was also the last major piece the artist completed before his death in 1883. It depicts a raucous scene at the infamous Parisian bar, which was known for a mixed clientele of fashionable socialites and members of the demi-monde, namely prostitutes. The subject of the piece is Suzon, an actual Folies barmaid, although she posed for Manet in his studio. The painting has fascinated critics for years due to its unusual perspective (Suzon’s reflection seems entirely divorced from reality) and Manet’s ability to create an atmosphere of isolation and melancholy, despite the fact that the canvas actually contains a large crowd. When the painting was first exhibited it caused something of a scandal, as Suzon’s position as a ‘working woman’ staring directly at the viewer was deemed both unsettling and suggestive.

‘A Bar at the Folies-Bergere’, Édouard Manet, 1881-2 | © The Samuel Courtauld Trust, The Courtauld Gallery, London

Cranach’s devotional masterpiece depicts the moment that Adam succumbs to temptation beneath the Tree of Knowledge. The artist was celebrated for his ability to render human flesh and animal likeness, so this allegorical subject was an ideal opportunity for him to show off his talents. The curves of Eve’s naked body appear to glow, as if illuminated by the dying light and her knowing smirk is balanced by Adam’s tentative expression. The huge menagerie that surrounds the pair does not just represent the delights of the Garden of Eden, but also elements of Christianity. The stag was known to symbolise Christ the Redeemer, while the stork and heron were often associated with morality and purity. More tentative readings include a sense of duality between the innocent sheep, representing true faith and the angry temperament of the boar. 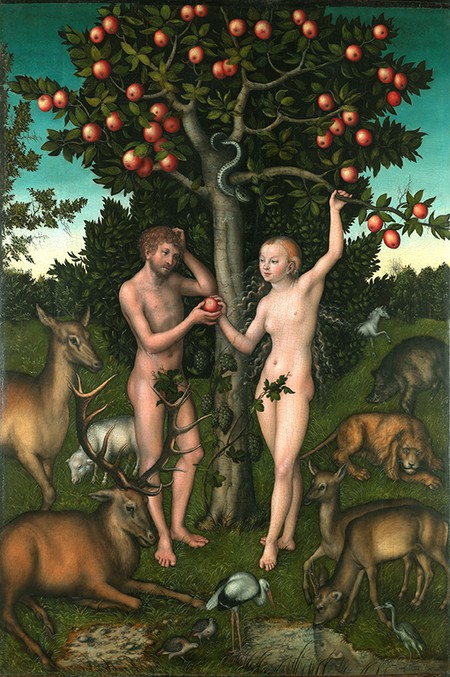 La Loge, or The Theatre Box, was a fascinating subject for the Impressionists, as a night at a show was regarded as the height of fashionable entertainment during the period. Far from simply enjoying the performance, attendees would use the opportunity to gossip and seek out their peers, examining the veritable ‘who’s who’ of Parisian society. Renoir’s depiction of a couple in their private box engages in this game of gazes. The central focus is on a glamorous woman in her elaborate striped gown, locking eyes with the viewer and clearly presenting herself as an object of desire. Meanwhile, in the background, her companion looks off into the crowd, seeking out another subject with the aid of his opera glasses. 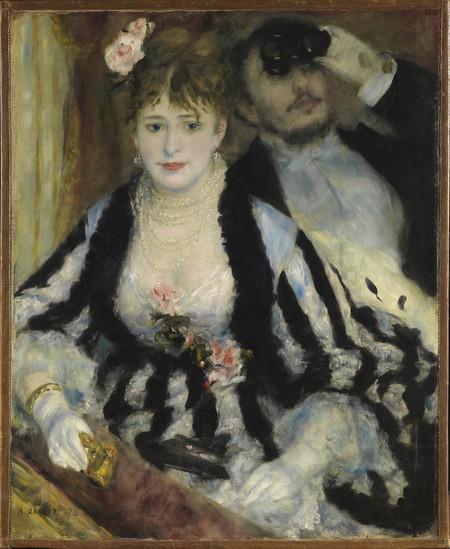 This complex still life was the first Cézanne purchased by Samuel Courtauld, after he discovered the artist’s work at the Burlington Fine Arts Club. This served as the gateway to the incredible collection he eventually amassed, which remains on display in the gallery today. The radical, distorted perspective the artist employed is regarded as a precursor to the development of the Parisian avant-garde, and was one of many late works that served as inspiration for Picasso and other emerging cubists. Cézanne famously advised the younger artist Émile Bernard to ‘treat nature in terms of the cylinder, the sphere and the cone’, a principle which is is clearly visible in this unorthodox composition. 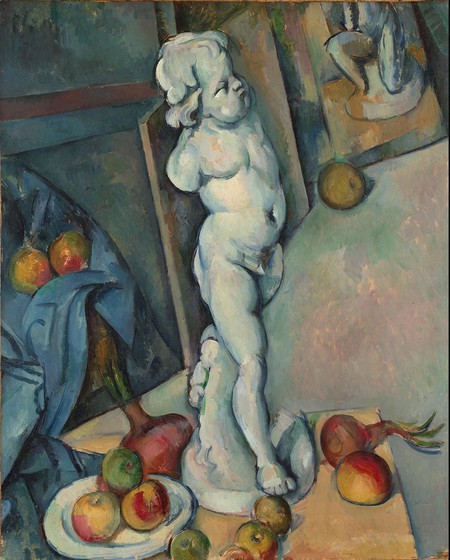 Although he died aged 35, Modigliani still had a profound impact on the art of his time. He fused his knowledge of Egyptian, African and Oceanic sculpture with more classical forms of European art, creating a new type of avant-garde nude. This sensuous painting went against the fashion for highly finished surfaces and embraced visible, emphatic brush marks. The inclusion of ‘explicit’ pubic hair was also a shocking addition at the time and even led to police investigations on accusations of ‘indecency’. 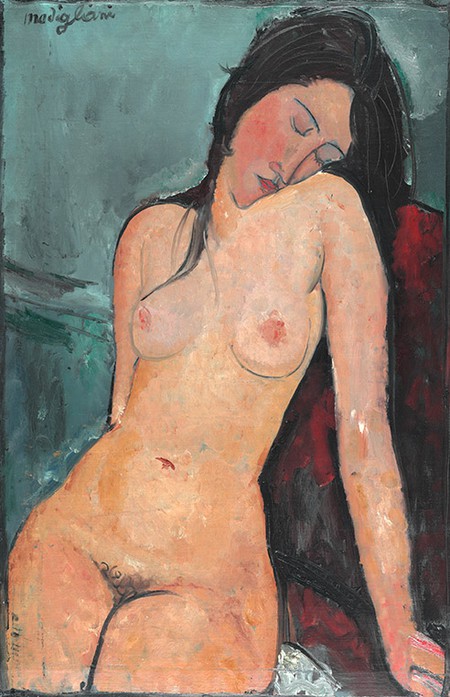 In the late 1880s, Gauguin fled the competitive realms of the Parisian art world and eventually took up residence in Tahiti, where he vowed to make ‘savage’ art that transcended the status quo. Nevermore is a prime example of his pioneering forays into symbolism, where dream worlds and psychological imaginings take precedent over reality. This erotically charged canvas features Pahura – his Tahitian wife – lounging on her bed, although her expression alludes to unease. The direct reference to a crow, coupled with the title inscribed in the left-hand corner of the canvas, is a seemingly obvious reference to Edgar Allan Poe’s poem of the same name. However, Gauguin denied any link between his work and the ‘bird of the devil’. 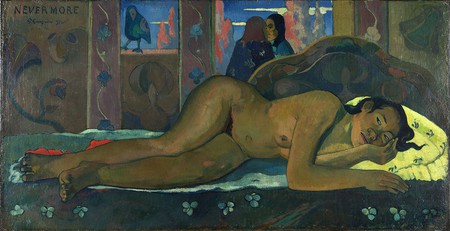 This portrait was painted shortly after Van Gogh’s infamous self-mutilation, when he cut off part of his ear following a violent argument with Gauguin. In this painting, his head is still bandaged up following his return from hospital. A blank canvas is primed in the background, alluding to the fact that he wished to carry on painting as a form of rehabilitation. Van Gogh’s infamously vibrant palette was due in part to Gauguin’s encouragement, who had suggested the artist should paint the world freely, as he saw it. It was also influenced by hues found in Japanese printmaking – Van Gogh was a fervent collector. To the right of this composition, he has replicated a print of Mount Fuji by Sato Torakiyo, although he has taken the liberty of moving some of the details around, in order to incorporate his own profile. 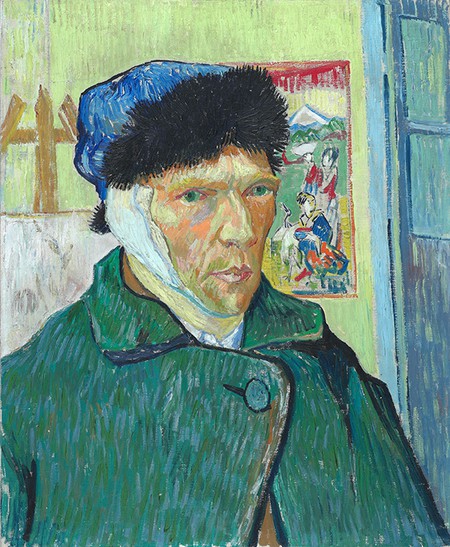 The Gainsboroughs married when they were teenagers, well before Thomas established himself as a leading portraitist. He painted this picture of his wife Margaret to mark her 50th birthday, and it is infused with a sense of intimate vitality that is emblematic of their lasting love. She remains poised, but the fluid brushwork imbues a wonderful sense of movement, as if she has turned towards her husband just a moment before. The artist was known for experimenting with thinning paints in order to replicate transparency and this work is a wonderful example of his ability to emulate delicate fabrics, flushed skin and human hair. 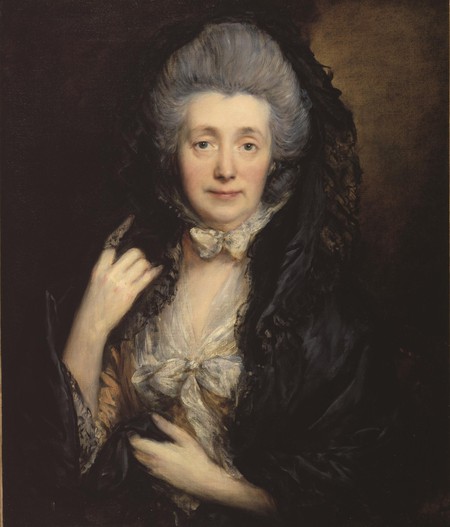 Although Nicholson had always experimented with the principles of abstraction, he didn’t make a complete departure from figuration until the late 1930s. This was due to the sizable influence of Barbara Hepworth – they married a year after this painting was completed – and several formative visits to Piet Mondrian’s studio in Paris. These lasting impressions are clearly visible in this geometric composition, where a rhythmic balance of light and colour supersedes any desire to emulate reality. It is one of several paintings produced that year, which were the first to focus more intensely on the colour theory employed by his Dutch peer. 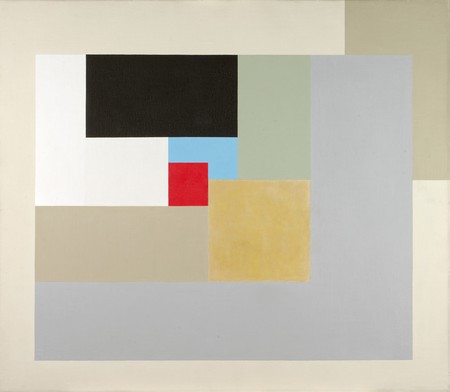 This elaborate scene of Christ’s crucifixion was commissioned for Sant’ Elisabetta delle Convertite, a Florentine convent for repentant prostitutes. Unsurprisingly, Mary Magdalen features prominently in the left of the composition. Her unusual outfit is actually comprised of her own hair, shrouding her body following a period in the wilderness, before she found her faith. As one of the most sought-after artists of the Italian Renaissance, Botticelli often employed the talents of his apprentices in order to complete complex pieces. In this instance, the crowd of angels that flank the cross are almost certainly by the hand of his workshop, while the master himself created the depiction of the Holy Trinity. 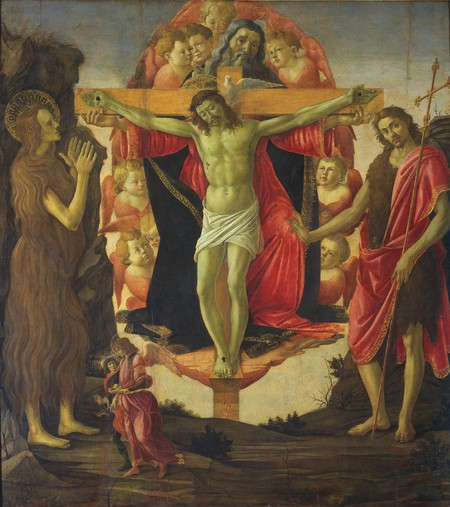 ‘The Trinity with Saints’, Botticelli, 1491-4 | The Samuel Courtauld Trust, The Courtauld Gallery, London
Give us feedback