Rue Oberkampf in May 2016 │© JeanneMenjoulet&Cie

Back in February, Paris’ city hall announced that a chunk of the budget participatif – the 500 million euros the public gets to spend before 2020 – would go towards creating murs d’expression, or street art walls, in all 20 arrondissements. Two projects commissioned by La Place, Paris’ hip-hop cultural center, have already been completed. While we wait for the rest, here are ten of the best urban canvasses already in the capital. 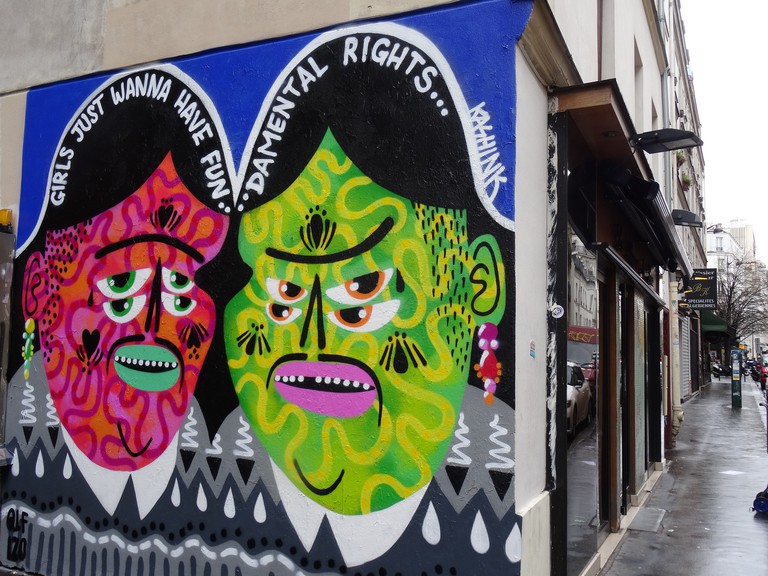 Rue Saint-Maur in February 2016 │ | © JeanneMenjoulet&Cie
This 2km-long street in the 10th and 11th arrondissements is ripe for artistic exploration. Keep your eyes off the pavement and on the walls, and you’ll see classic elements of Parisian street art like Invader’s video game-inspired tilework and black-and-white portraits by Shepard Fairey. Close to the intersection with rue Oberkampf, another street on our list, you’ll find a recent work by Kashink, arguably Paris’ most notable female street artist working today. Her work has a strong feminist strain and has been said to echo that of Frida Kahlo.
Open In Google Maps
Paris, France
Give us feedback 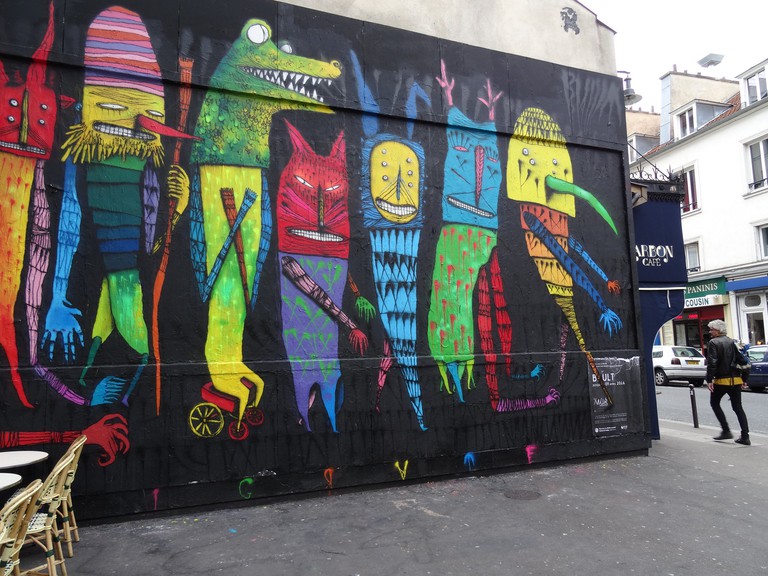 Rue Oberkampf in April 2016 │ | © JeanneMenjoulet&Cie
The Rue Oberkampf is another hotspot in the 11th for urban art and a good shout for a lively night out if you feel like combining the two. Art is popping up all the time on slivers of buildings, metal shutters, and street furniture, but a guaranteed spot to see fresh work is Le Mur, a dedicated, association-coordinated wall that is, at the time of writing, on its 222nd incarnation. A new artist is invited to transform the wall every few weeks (check their website for details), and the performance usually attracts a sizable crowd.
Open In Google Maps
Paris, France
Give us feedback 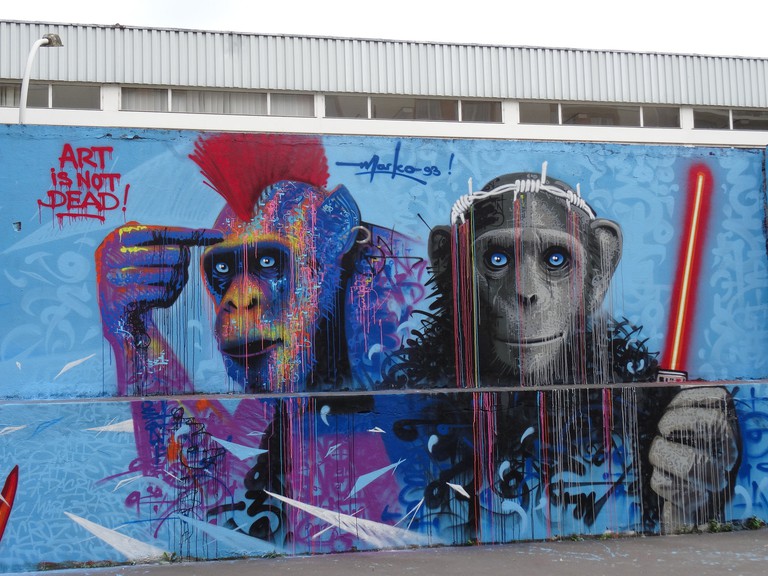 Rue Germaine Tailleferre in June 2016 │ | © JeanneMenjoulet&Cie
A relatively new road by Parisians standards, created only in 1999, the Rue Germaine Tailleferre in the 19th runs parallel to the canal and into the Parc de la Villette. A continuous stretch of wall several hundred meters long on one side of the street is covered with art by some of the neighborhood’s biggest names. This summer, almost the entire expanse was taken over by a masterpiece in blue by Marko93 aka DarkVapor. The native of Saint-Denis has, in recent years, become equally renowned for his explorations in the photographic technique of light painting.
Open In Google Maps
Paris, France
Give us feedback 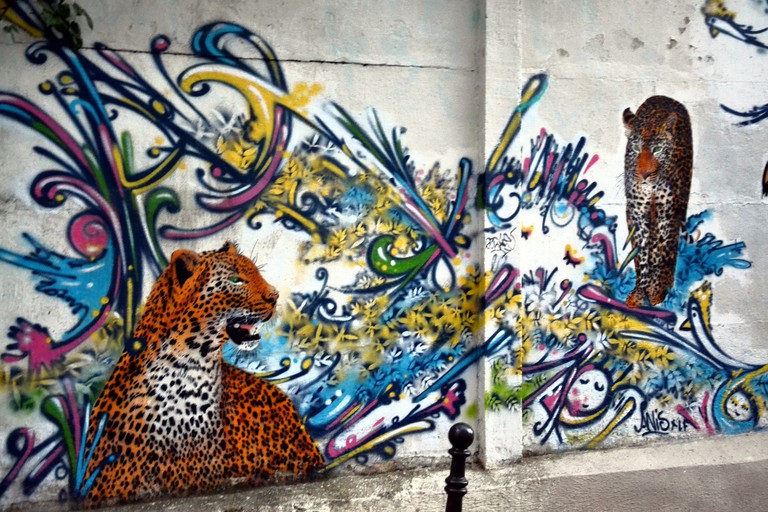 Rue Laurence Savart in June 2016 │ | © JeanneMenjoulet&Cie
Over in the 20th arrondissement, the Rue Laurence Savart, a narrow, cobbled street, impenetrable even to the penetrating gaze of Google Maps, has long been popular with artists. In 1947, it was photographed by the award-winning photographer Willy Ronis – the black and white print of a man carrying a window pane up its slope recently sold at auction for 1,200€ – and, today, it is developing a reputation for its collection of street art. The work below by Mosko et associés is part of the two-man collective’s project of creating a different kind of urban zoo for Paris.
Open In Google Maps
Paris, France
Give us feedback 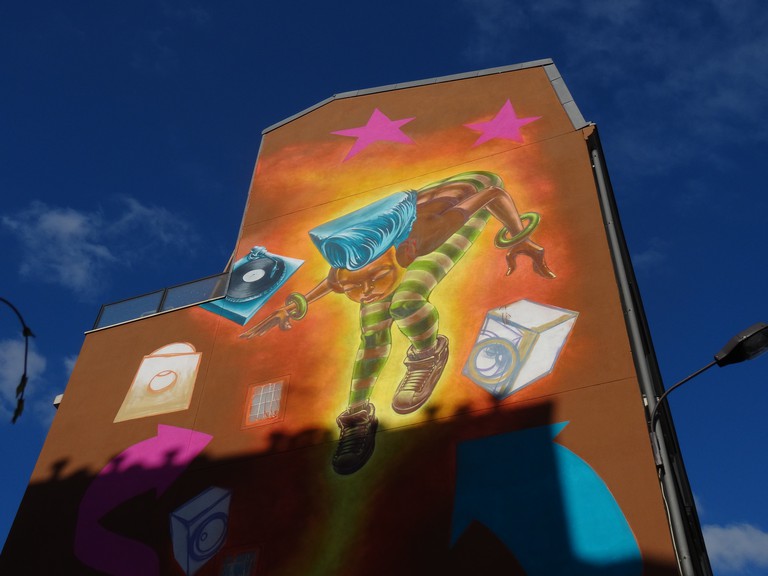 Boulevard de la Villette in July 2016 │ | © JeanneMenjoulet&Cie
The second of the projects completed with funds derived from the budget participatif,the massive modern fresco overlooking a community garden on the Boulevard de la Villette, was created by Lazoo in July 2016. Born in Paris in 1969, the artist has exhibited his work internationally, including in Germany, Japan, the United States, and South Africa. The first murs d’expressioncommissioned under the scheme was by 2shy and is located at 58 rue Chapon in the 3rd. (You can search for updates on future projects using #parismursmurs.)
Open In Google Maps
Paris, France
Give us feedback 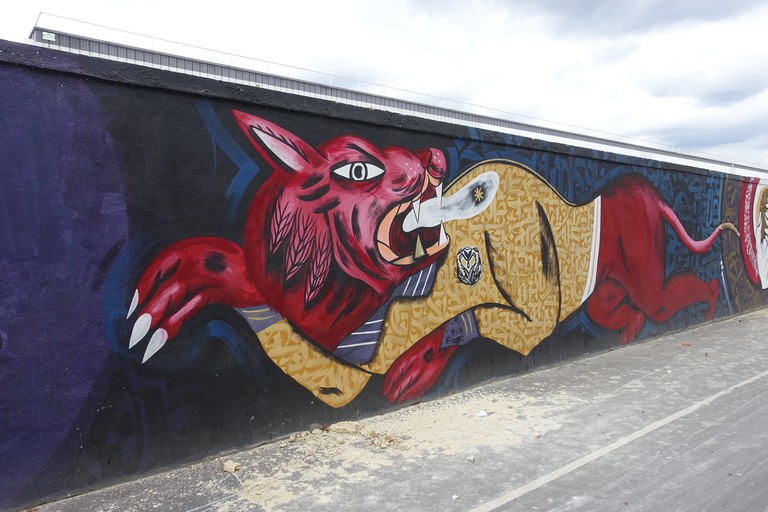 Rue Riquet in July 2016 │ | © Guilhelm Vellut
On a bridge over the railway tracks leading in and out of Gare du Nord, linking the 18th and 19th arrondissements, a 500m-long street art wall (the largest dedicated space in Paris) was created in December 2015 in honor of the life and achievements of Rosa Parks. For its inauguration, five international artists, including four women, were chosen to create a piece for the wall: Paris’ Kashink, Nantes’ Katjastroph, Bogota’s Bastardilla, New York’s Tatyana Fazlalizadeh, and Toulouse’s Zepha. The surrounding area is changing rapidly, fueled by municipal investment and enthusiastic community projects, exemplified by the Centquatre.
Open In Google Maps
Paris, France
Give us feedback 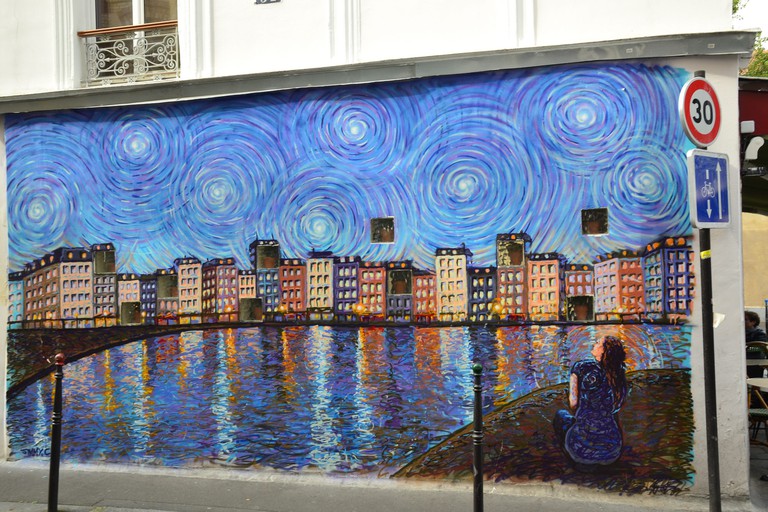 Rue des Cascades in July 2016 │ | © Pop H
Easily one of the most charming streets in the 20th arrondissement, by name and by nature, the Rue des Cascades (Road of the Waterfalls) recently acquired a work of street art to match. The Van Gogh-inspired mural by James Cochran aka Jimmy.C arrived in July 2016. The Australian artist is based in London, and his most famous works of late have been his portrait of Usain Bolt, a key image of the 2012 London Olympics, and his 2016 painting of David Bowie in Brixton, which became an unofficial site of mourning after the singer’s death.
Open In Google Maps
Paris, France
Give us feedback 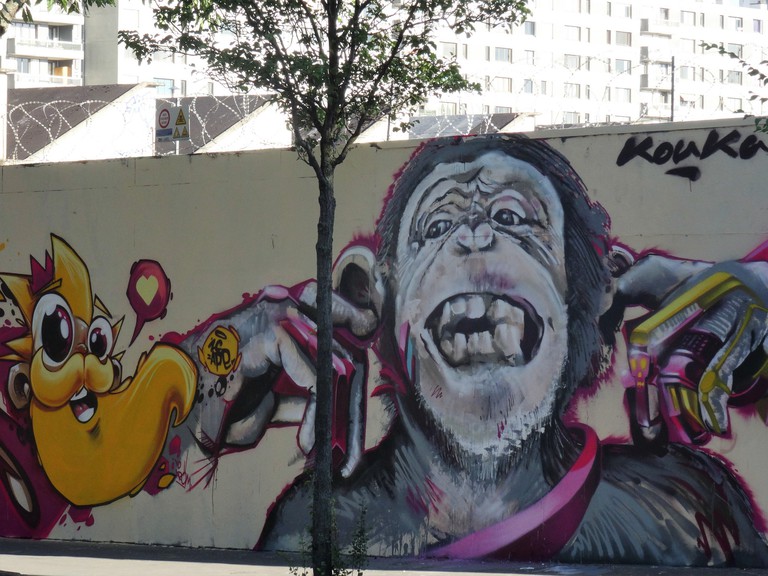 Rue Ordener in August 2016 │ | © JeanneMenjoulet&Cie
Back in the 18th, the expansive wall on Rue Ordener, which blocks the view of the disused SNCF depot turned seasonal venue, Grand Train, is fertile ground for local graffiti artists. The mixture of tagging and representational art is constantly evolving, and no two visits to the wall are ever the same. In August 2016, the site featured a work by Kouka, a Parisian artist whose debut Bantu Warriors series made him an immediate star. His Chimpanzees series is an attempt to remind the public of what they are and where they came from but also what they’d be without their cultural heritage.
Open In Google Maps
Paris, France
Give us feedback 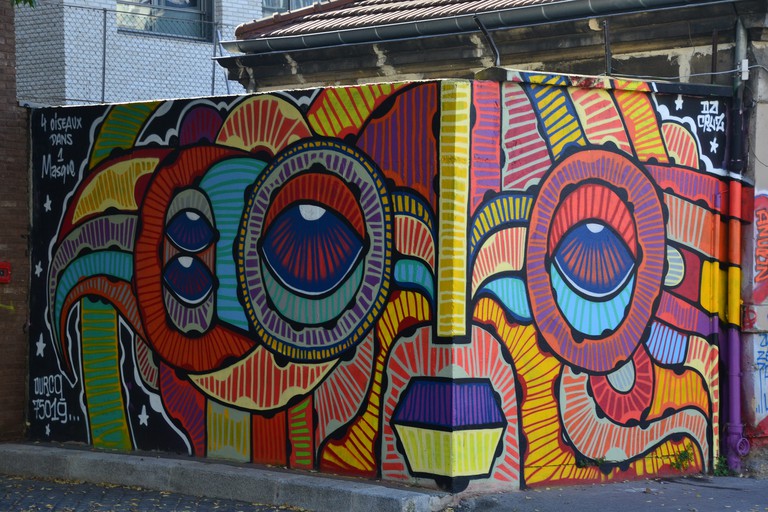 Rue de l’Ourcq in October 2016 │ | © Pop H
Essentially, the entire stretch of the Canal Saint-Martin and the Canal de l’Ourcq, even after it passes out of the limits of central Paris, is one long mur d’expression. Works of a whole variety of artists can be found on purpose-built walls or on abandoned industrial buildings, cast iron bridges, and pretty much any other surface that can accommodate paint. A recent addition by dAcRuZ, a lover of color and graffiti and art primitif, is definitely worth checking out.
Open In Google Maps
Paris, France
Give us feedback 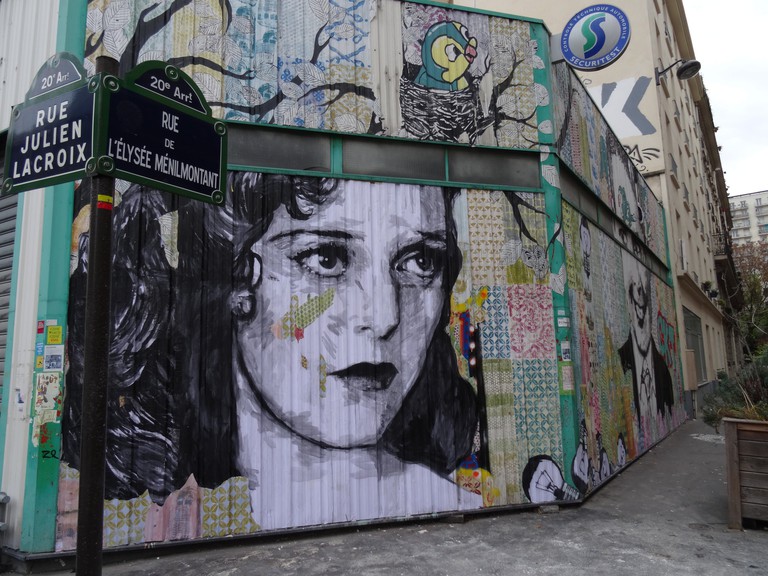 Rue de l'Elysée Ménilmontant and Rue Julien Lacroix in November 2016 │ | © JeanneMenjoulet&Cie
Our final location, once again in the 20th arrondissement, is the crossroads of Rue de l’Elysée Ménilmontant and Rue Julien Lacroix. The enormous and yet impossibly detailed mural created by No Rules Corp is a truly magnificent piece of work. The collective, which includes street artists, painters, musicians, and videographers, was formed in Lyon in 2005. EvazéSir is its graffiti component, responsible for the works in their distinctive style that you’ll find elsewhere on the streets of Paris.
Open In Google Maps
Paris, France
Give us feedback
Give us feedback