10 Emotions That Can Only Be Explained in French 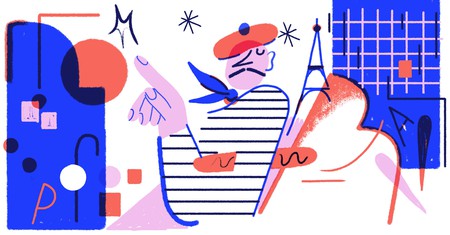 French is a romantic language that seduces the heart like none other, so there’s no surprise it’s enriched with a wealth of words describing emotions that are tricky to articulate. Here are some of the most poignant examples.

A change of scenery can often be disorientating when you‘re no longer in your home country. It can sometimes feel like you’ve been uprooted, leaving you feeling disorientated like a ‘fish out of water’. The feeling that arises from not being in your home country is known as dépaysement in French. Literally, it means ‘un-country-ing’, and while not quite homesickness, it’s an elegant way to express being geographically uprooted.

The French have worked up a bad reputation for their disgruntled habits over the years, especially Parisians, who have recently been labelled the biggest moaners in France. The word râler is the perfect way to describe someone whose behaviour is hovering unpleasantly between whining and complaining. The nuance arises from the fact that the French have actually developed it into a sophisticated art, expressing their dissatisfaction with the rest of the world!

The phrase l’esprit d’escalier explains that irritating moment when you come up with the perfect witty comment or comeback, but the time has passed and it’s too late. It translates as ‘staircase wit’ and has an interesting historical trajectory. It was reportedly invented by the 18th-century philosopher Diderot, who noted how he could only think of brilliant retorts after walking away from an argument, which was often down a flight of stairs.

Ever wonder what it would feel like to jump from a tall height? The French phrase l’appel du vide translates literally ‘the call of the void’, and refers to the peculiar urge to jump from high places. Standing at the top of the Eiffel Tower on a beautiful, sunny day in Paris with incredible views, has been known to fill awestruck tourists with this inexplicable feeling. Of course, it rarely leads to dangerous situations, though it does feel disturbing.

Since French is often thought of as the world’s most romantic language (although perhaps the Italians would argue for that title!), there are many phrases relating to love. The phrase la douleur exquise is the ‘exquisite pain’ that one suffers from unrequited love. More than just a physical discomfort, it sears right through the soul, and has inspired artists and writers for centuries.

The French often say J’ai eu un empêchement. It is the perfect excuse for when you don’t want to say exactly why you are late for an appointment; instead, you just had an ‘unexpected last-minute change of plans’. The verb empêcher means to prevent, so this phrase hints at intentions being hindered by some unspecified and ambiguous force. It can be used if you’re being secretive, but more often, it’s just a lazy way to get out of having to explain yourself!

There are certain family members and friends that you just know you can spend time with in public without fear of being shown up or embarrassed, but with others, it takes a little more forward-planning. In French, sortable is the adjective used to describe those people who you know won’t ever embarrass you. It stems from the verb sortir which means to go out or exit, with sortable translating literally into someone you can take out.

The word flâneur (wanderer) originated in the 16th century, gaining a set of rich associations in the 19th century, thanks to French poet Charles Baudelaire. He crafted a portrait of the urban explorer so memorable – leisurely wandering the wide boulevards and cafés of the capital – that no picture of Paris is complete without it. The emotion it encapsulates is the idea of wandering with no particular goal, simply exploring for the pleasure of soaking up the atmosphere.

In French, retrouvailles is one of the most heartwarming expressions. The word explains the happiness of meeting someone after a very long time, possibly after a long separation. You can say: on va fêter les retrouvailles to explain that you will be ‘celebrating a reunion’; one that often takes places between lovers or loved ones and that can be very emotional. It stems from the verb retrouver which means ‘to find again/rediscover’.

One of the most amusing words in the French dictionary of words describing emotions that we can’t explain, relates to the explosive personality of your craziest friends. The word frappadingue is for someone who acts so crazy, perhaps spontaneously and dangerously, that it’s like they’ve been hit on the head. The curious word is hybrid blend of frapper (to hit) and dingue (crazy).