In the space of 82 years, Paris hosted six Expositions Universelles, or World Fairs. Oddly, the last one took place almost as many years ago. Now, along with Osaka and Manchester, the city is pitching for the opportunity to welcome the world again in 2025. Before getting to grips with the exciting plans for EXPOFRANCE 2025, we take a look at the marvels that past fairs brought to global attention.

Products from agriculture, industry, and fine arts, 1855: The saxophone

Five million people attended Paris’ first world fair on the Champs-Élysées in 1855. London’s Great Exhibition at Crystal Palace preceded it by four years, which spurred the organizers on to create ambitious architectural works like the Palais de l’Industrie and the surviving Théâtre du Rond-Point. Inventions displayed include the Loysel percolator, capable of making 2,000 cups of coffee per hour; the lawn mower, washing machine, and Singer sewing machine; the Colt six-shooter revolver, and the Bordeaux wine classification system still used today. But we are most glad that Adolphe Sax’s saxophone had its moment in the spotlight.

Treble the number of visitors made it to the second fair, at which some 42 countries were represented amongst the 50,226 exhibitors. The public’s breath was taken away by modern technologies like locomotives, cannons, and enormous construction cranes. The most influential from a literary point of view was the gigantic aquarium containing a deep-sea diver, which inspired Jules Verne to write Twenty Thousand Leagues Under the Sea. As beloved as this novel is, it comes in second in our estimations to the original Louis Vuitton trunks which made their debut at the show and whose popularity has impressively endured. 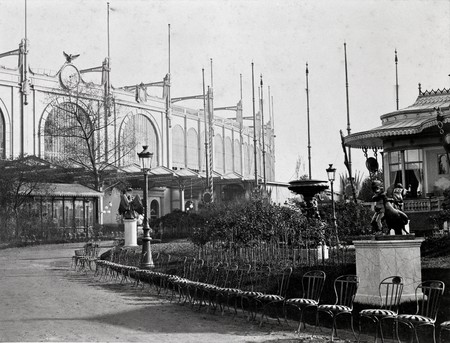 Empty chairs at the Exposition Universelle in 1867 │ | © BIE

The World Fair of 1878 was intended to celebrate France’s return to peace and prominence after the Franco-Prussian War of 1870 to 1871. Though the number of people who attended the show only rose slightly to 16 million, this show is considered to be both the simplest and most intellectual of them all. Some of the most famous inventions of all time were unveiled. Hard to separate in this regard are Alexander Graham Bell’s telephone and Thomas Alva Edison’s megaphone and phonograph. The public was also able to ascend the head of the unfinished Statue of Liberty, gifted to the U.S. in 1886. 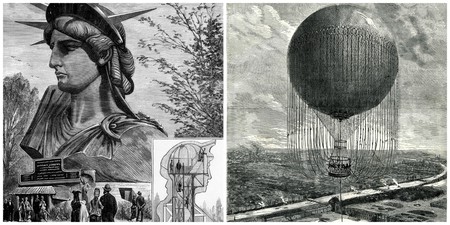 Pland for the Statue of Liberty, 1878│ | © BIE ; Sketches for the captive balloon│| BIE

Another miraculous invention of the 1878 show was the first demonstration of electric street lighting. The Yablochkov arc lamps, powered by Zénobe Gramme dynamos, had been installed along the Avenue and Place de l’Opéra and, in June, a switch was thrown and the whole area lit up to people’s amazement. However, the gas lighting which came before had already earned Paris the nickname of the City of Light. A part of the exhibition galleries was preserved and relocated from the Champ de Mars to the Bassin de la Villette. The building is now occupied by the MK2 cinema, Quai de Seine. 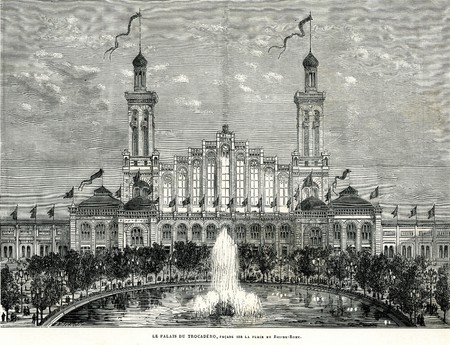 The 1889 World Fair marked the 100th anniversary of the storming of the Bastille and the beginning of the French Revolution. Held between May and October, it ultimately attracted a staggering 32 million visitors, many of whom came to see a reconstruction of the most famous prison in history and another now-familiar structure: the newly built Eiffel Tower. Workers had been on the job day and night to finish the tower, which remains the tallest feature of the Parisian landscape. Other important products featured at the show include Tissot watches, cigarette manufacturing machines, and the gramophone. 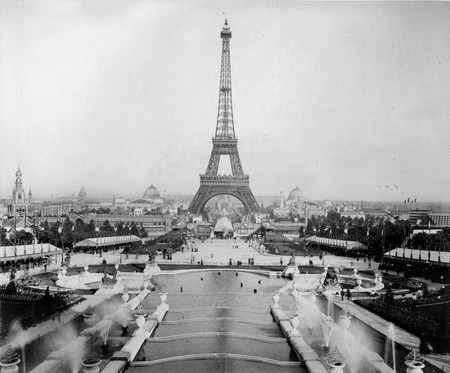 The Eiffel Tower entrance to the Exposition Universelle in 1900 │ | © BIE

The Exposition Universelle of 1900 was ten times the size of the original event held in 1855. The show ground amounted to 120 hectares and 83,000 exhibitors were involved, including 40,000 from overseas. In six months, 102 million passengers used Paris train stations, including those of the newly inaugurated underground metro system. The system was expanded over the following years and only a very small number of its original metro entrances exist today. Remarkably, 51 million people came to see the fair. At the time, France had only a population of 41 million! 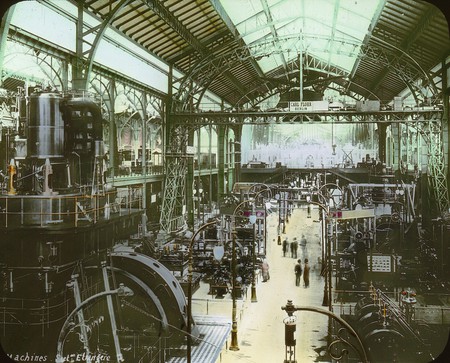 One of the most spectacular performances of the 1900 show was the Electricity Fairy on the Palais de l’Électricité, who held a beacon that ran on a whopping 50,000 volts. The first proper films – brief excerpts of opera and ballet performances – were also shown to the public, incorporating projections of both image and recorded sound. Other optical wonders included a massive kaleidoscope and the siderostat, a 60-meter-long instrument that made the moon appear to be only 36 miles away. The Grand and Petit Palais, the Pont Alexandre III, the Musée d’Orsay, and Gare de Lyon are all surviving fair structures. 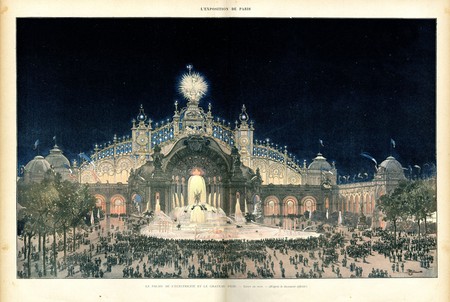 The dominant artistic style at the 1900 World Fair was, overwhelmingly, Art Nouveau. The movement had begun in the 1880s and become fashionable in Europe and the United States during the 1890s. By the turn of the century, the natural lines and motifs of the style were visible in painting, sculpture, and, most notably, architecture. Other taste-making contributions included the Michelin restaurant guide and the now globally famous matryoshka doll, or Russian nesting doll. Remarkably, Russia’s sparkling wine also outdid all French entries to win the internationally coveted Grand Prix de Champagne. 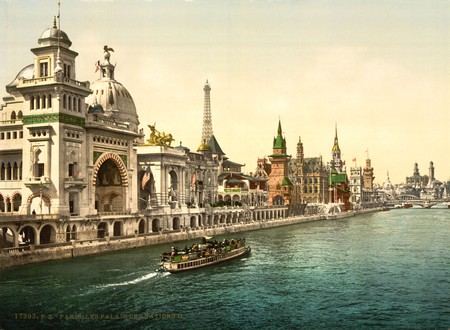 World War I and the Great Depression had hindered France’s ability to stage international events, and World War II and subsequent technological advancements would soon put paid to them for the best part of a century, but Paris’ final World Fair of 1937 still attracted over 30 million people. The Musée de l’Homme and Palais de Tokyo were both created for the exhibition. The Spanish pavilion – put together despite the nation’s ongoing civil war – contained the fair’s most valuable creation: Pablo Picasso’s Guernica, a brutal depiction of the horrors of war and a cultural touchstone in times of looming conflict. 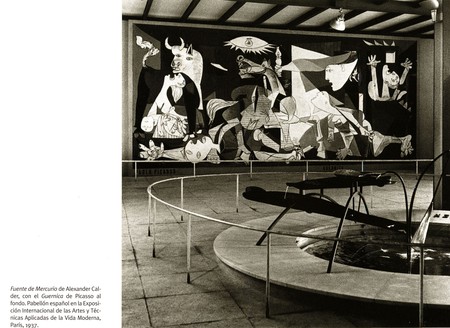 Pablo Picasso’s Guernica at the Exposition Universelle in 1937 │ | © BIE

The 2025 World Expo will be organized around a central Global Village – the heart of Grand Paris – serviced by a new train station and covering an area of between 200,000 and 300,000 square meters. Twelve French cities, including Lille, Strasbourg, and Marseille will be directly linked to the village, and it’s expected that the event will attract 40 to 60 million visitors, create 200,000 new jobs, and bring 25 billion euros into the region. As for inventions, we will just have to wait and see what the brilliant minds in every nation can come up with between now and then. 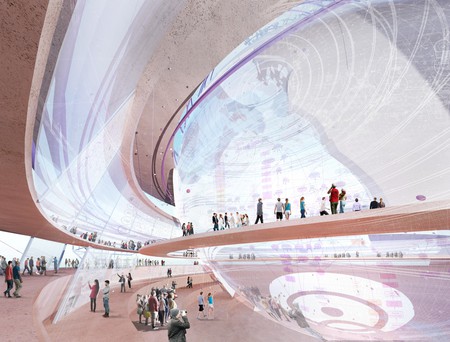