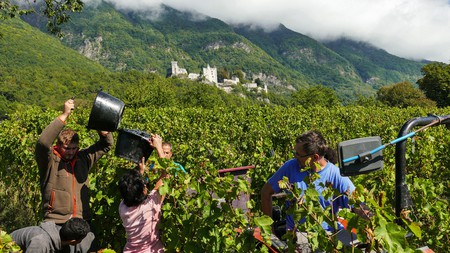 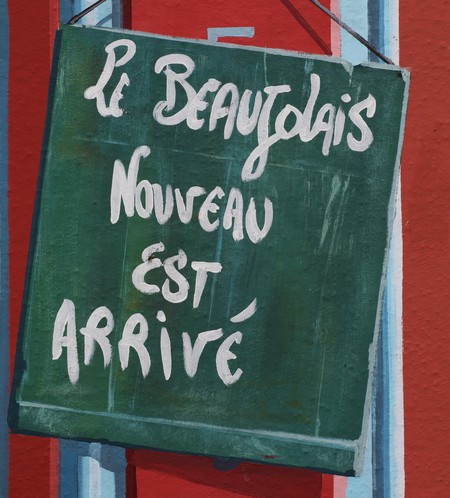 On the third Thursday of November, the French celebrate the launch of the new beaujolais nouveau with a raucous night out | © Eric D ricochet69 / Alamy Stock Photo

Say the word ‘beaujolais’, and what usually comes to mind is the fruity beaujolais nouveau. On the third Thursday of November, the French celebrate the launch of the new wine with a raucous night out. (The Japanese, meanwhile, bathe in it, but that’s a different story.) 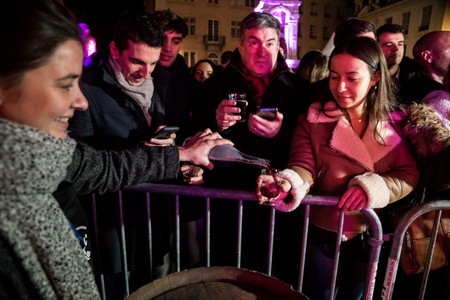 Yet while the taste of that first primeur of the season (reminiscent of banana Runts or Tagada Strawberries) is familiar to millions, far fewer know that Beaujolais is a centre of innovation – particularly when it comes to the fashionable field of ‘natural’ wine.

Beaujolais straddles the Rhone and Burgundy regions, but its wine stands out from both in a number of ways. Almost all beaujolais red, whether new or aged, is made with gamay grapes, a cross between pinot noir and ancient white gouais. Outlawed in Burgundy by Philip the Bold in the 14th century, the fruity character of this grape became a defining characteristic of Beaujolais wines.

Add to this the carbonic or semi-carbonic maceration that is used in almost every Beaujolais vineyard – a process of fermenting whole grapes in a carbon dioxide-rich environment prior to crushing – and the result is a light-bodied, low-tannin, fruity red that’s often praised more for its low price point than for its quality or ability to age.

This partly explains the 1985 decision to market beaujolais nouveau with the now-famous party on the third Thursday of November. But while the drive was wildly successful for vineyards whose produce could be drunk instantly, for those vinters aiming for vintages that would keep, it proved disastrous; in fact, following the 2001 vintage, more than 1 million cases of beaujolais had to be destroyed or distilled due to falling sales directly linked to the popularity of beaujolais nouveau.

Out with the new and in with the old

You might think the obvious thing to do would be pack it in and hop on the quick, cheap and cheerful bandwagon. But several locals have decided to take the opposite approach. They’re on a mission to salvage the reputation of the region as a place to make ‘serious’ wine.

Jean-Paul Brun is a winemaker from Charnay, near the border with Burgundy. Born and raised in a grape-farming family, Brun developed an interest in the art of making wine early, and his father decided to stop selling their grapes to others and instead give Brun a chance to vinify and bottle his own produce. The name of his vineyard, dubbed the Domaine des Terres Dorées, evokes the golden stones of the villages that surround him. 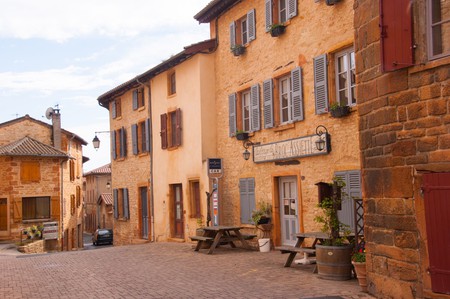 While Brun, like his Beaujolais peers, works with gamay grapes, he plants some of his vines on limestone soil, as opposed to the granite soils found elsewhere in the area. He also uses a winemaking style unique in his region: what he calls “vinification à la bourguignonne,” or Burgundy-style vinification.

This method calls for fermenting the whole bunches (including the stems) before crushing them, lending more structure and a greater capacity for aging to the resulting wines. Coupled with relatively long macerations – about four weeks – his method “gives the wines the time they need, so that all of the information from the terroir goes into the wine”.

“I’ve been doing it for 30 years,” he says of his winemaking technique. “I realised that I wanted wines that were a bit better constructed, wines that showed the personality of the terroir.”

Biodiversity, bread and going back to basics

In Blacé, 30km (19mi) to the north, Ludovic and Marie Gros have taken a different approach to renewing the local cru. In 2003, these winemakers decided to pull up a portion of their ancestral vines to grow, in their stead, ancient wheat plants, with a goal of producing and selling their own artisanal bread. 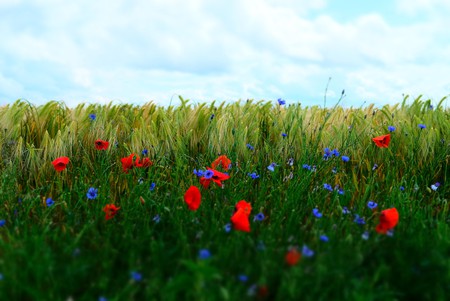 This novel move came in direct contradiction to the mindset that had prevailed in the region since the 19th century, following the phylloxera outbreak that ravaged vines throughout France. Beaujolais had turned to intensive planting of vines to replace what had been lost.

According to sustainable food magazine La Ruche Qui Dit Oui, “the region became, at that point, a champion of monoculture”. It wasn’t easy to convert the land, after years of conventional planting, but today, the couple have hit their stride, selling both their artisanal bread and their wine.

Returning to a more biodiverse means of farming is not unique to the Gros farm. Just 3km (1.9mi) away, Romain des Grottes is experimenting with alternative forms of pest control to protect his gamay pieds.

A self-described “neo-rural” enthusiast, des Grottes grew up in Paris and went to business school in Rouen before moving to Beaujolais to work with his grandfather, first in the office, then in the vineyards.

He notes that, as someone who came from the city, he was hoping the locals would be able to teach him a bit more about the land he was working. “Honestly, I was disappointed,” he says, recalling that he asked one of the men working for his grandfather, “What’s that plant?” only to have him reply: “Don’t worry. It’ll go away when you come by with the herbicide.”

It wasn’t until 2008, while attending a school of medicinal plants in Lyon, that des Grottes was able to satisfy his curiosity and put it to work. Today, he uses biodynamic methods as part of his philosophy of “learning to look at plants as living beings and not objects”.

Techniques like those championed by both des Grottes and Ludovic and Marie Gros are key to the production of ‘natural’ wine. The term has no strict definition, but by and large it involves eschewing mechanical harvesting, filtration, additives and sulfites. The trend has spread throughout France, Italy and even to Australia, but Beaujolais has a strong claim to be its birthplace.

The man widely recognised as the founding father of all things natural is Jules Chauvet, a Beaujolais native from a family of négociants who, in the 1960s, decided to adopt a more organic approach to working the land. In the chemically trigger-happy 1970s, he was a bit of a lone wolf.

“Jules preached in the desert for a long time,” his niece, Bénédicte Chauvet, told Vice recently. But in the generations that followed, natural winemaking took off, with big names like Georges Descombes making a major splash. Winemaker David Large, in Le Clerjon, is pushing things even further. His goal is to de-dramatise wine for a new generation, and while he’s the son of a Beaujolais winemaker, he does things very differently.

“My dad was very traditional,” Large says. “We always worked traditionally, be it in the vines or with the labels.” But after working in a beer bar, Large came to a realisation: “We’re 20 years behind the beer world.”

He started having more fun with labels, notably with regards to tasting notes, which he finds rather useless and repetitive. “It’s annoying,” he says. “Often, in the supermarket, you find the same thing: ‘Goes well with meat and cheese. Goes well with turkey and fish.’ It doesn’t go any further than that!”

Instead, Large adds poems and lyrics to his labels, evoking the music that is his frequent companion during his solitary work in the vines. “It inspires me,” he says. “Like people who listen to music at the gym to get pumped up.” He even collaborated with Jean-Pierre Vial to make a short film combining rap and wine.

“I like to talk to people who don’t know anything about wine,” he says. “So if I can make connections with people by making connections with movies, poetry I write or music…that’s even better.”

A new approach to the nouveau

But today’s Beaujolais producers are embracing what was once a mere marketing ploy in a new way. Brun makes two: one from his younger vines, fruitier and fresher, and one with older vines, for a more constructed final product.

“I can only say good things,” he says of the event. “Gamay is great for making new wines…as long as they’re well-made.”

Large notes that, to a certain extent, his generation is “reappropriating” beaujolais nouveau. This year, he will be launching his rap-and-wine soirée in Bordeaux… And for perhaps the first time, he’ll be trying to convince French people of its quality.

“I’m not used to this audience,” he says, noting that he’s more accustomed to dealing with Anglo-Saxon drinkers who tend not to take their wine quite so seriously. But he plans to adopt a similar approach in Bordeaux. “We’ll talk about music and terroir and wine,” he says.

“At its core, it’s not a wine you want to stress yourself out over,” he continues. “It’s just the wine you drink to get through the winter, to party, to hang out with friends.” Conviviality, then, is still at the core of this most modern version of the beaujolais nouveau celebration – a sentiment echoed by des Grottes.

“For me,” he says, “Wine shouldn’t be complicated. A tasting should always bring you back to a super-simple question: ‘Do you like it or not?’”