Why Western France Should Be Your Next Culinary Getaway 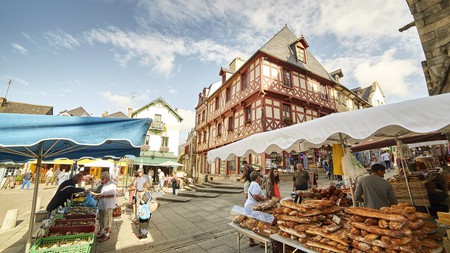 Western France's culinary traditions are famous around the world, and the market at Josselin is a great place to stock up | © LAMOUREUX Alexandre
Paid partnership with

Delve into the delicacies western France has to offer, starting with an overnight trip on Brittany Ferries, where top chefs serve up superb seafood with ingredients sourced from Normandy and Brittany, and deliciously decadent desserts. Enjoy travelling in a bubble, starting with a good night’s sleep in your own cabin, and with plenty of space and freedom on board before continuing in your own car for an exciting foodie adventure.

If you’re looking to embark on a voyage of French gastronomy, look no further than western France. Local dishes vary considerably from region to region, so whether you want to feast on famous Brittany oysters or head to the Loire Valley to sip on exquisite wines paired with Appellation d’origine contrôlée (AOC) protected goat’s cheese, western France is the best place to start. 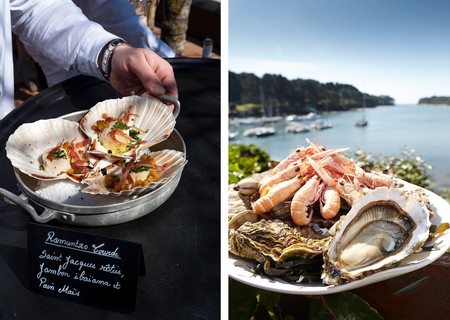 Roll off the ferry in time for breakfast Saint-Malo-style – for coffee and croissants on a terrace in the walled old town, try La Licorne. When packing for gourmet picnics, the Corsair city is a food-shopping heaven, so snap up goodies on Rue de l’Orme, with its many stores and enticing local specialities. Grab a buckwheat beer at La Maison du Sarrasin and decadent vanilla-flavoured butter at La Maison du Beurre. Then zip across the street for a galette and a cup of Breton cider at Breizh Café. For goodies to take home, head to the wondrous Épices Roellinger, which sells spices from all over the world, inspired by the town’s spice trade. 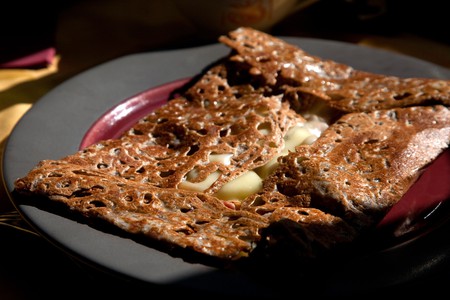 For a taste of the sea, head 16km (10mi) east of Saint-Malo to Cancale and its beachside oyster market. Here you can buy half a dozen oysters direct from the producers. Simply squeeze on a slice of lemon, swig back the brine-infused oysters and enjoy the view of Mont Saint-Michel on the horizon.

The Breton capital, Rennes, an hour inland, is a hotspot for a gourmet getaway. The bountiful market in the Place des Lices, the second biggest market in France, has 300 stalls selling everything from glossy fruit to cider; as well as the ultimate street-food staple – the galette saucisse. This Breton answer to the hot dog sees a sausage wrapped inside a buckwheat pancake. Add onions if you like, but be careful not to ask for ketchup, it’s considered sacrilege to add sauce! 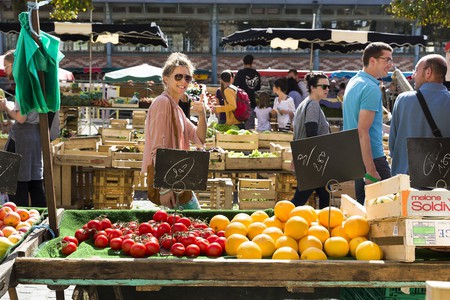 Elsewhere, Rennes has embraced the casual dining culture nicknamed Bistrologie, where cosy bistros match dishes with excellent wines for a relaxed yet gourmet experience. Craft beer aficionados will be spoilt by the city’s many craft breweries, while Rue Saint-Michel is the place to be after dark. Nicknamed Rue de la Soif (or Thirsty Street), it has a bar at every 7m (23ft) along its length. 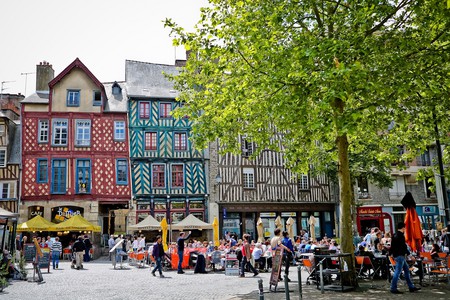 After a lazy breakfast, leave Rennes for the 1.5 hour drive to Nantes. Start with lunch at the acclaimed LuluRouget on the Île de Nantes, where chef Ludovic Pouzelgues serves dishes inspired by local produce and his experience at some of the best restaurants in France. From here, it’s not far to admire the incredible Machines de Nantes, including a 12m (39ft) robotic elephant, a three-storey carousel inspired by the sea, and, appearing to the public for the first time during the February 2021 holidays, an impressive 2m-long (6ft) robotic chameleon. Follow the green line painted on the pavements, which winds its way around the city’s main attractions, including a crop of fascinating street art sculptures. 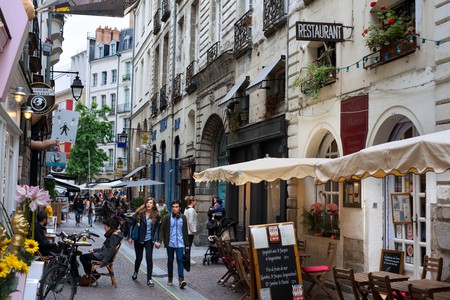 Explore the bustling back streets, bars and restaurants in the old town of Nantes | © Sergi Reboredo / Alamy Stock Photo

In the former capital of Brittany, crêpes are a speciality, so tuck in at one of the many crêperies, such as the cheerful L’Optimiste.

Muscadet is the region’s signature wine, so head south of Nantes on a 118km (73mi) wine route between the banks of La Sèvre-Nantaise river, stopping for tastings at vineyards and refuelling at Le Camion Gourmand food truck at La Haye-Fouassière. 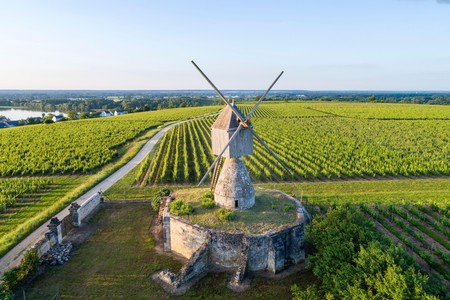 From Nantes, head east for an hour to Angers. Dominated by the mighty walls of its château, is home to Cointreau, a key spirit in cocktails such as the cosmopolitan or sidecar. Take a tour of the distillery, finishing at the tasting bar, before exploring the riverside bars known as Guinguettes, which are great to explore by bike.

Pedal down to the idyllic riverside village of Bouchemaine for a drink at Le Noé, and then on to Guinguette de Port-Thibault, which overlooks the peaceful River Loire. Tuck into lunch, starting with local pork rillettes, a kind of pâté served with bread. Also look out for the local speciality beurre blanc, a white wine and butter sauce served with river fish such as pikeperch. 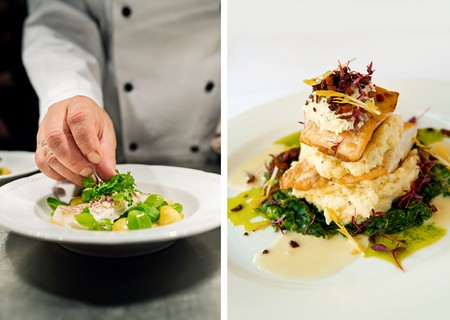 Head north from Angers and, in less than two hours, your road trip will bring you back to Normandy, stopping first at the Perche regional park, beloved by chic Parisians who flock here on weekend getaways. Stop off in Bellême for a spot of vintage shopping (browse the bric-a-brac and retro treasures) and lunch at La Verticale the wine bar, where you can tuck into a baked camembert, one of the region’s four cheeses. 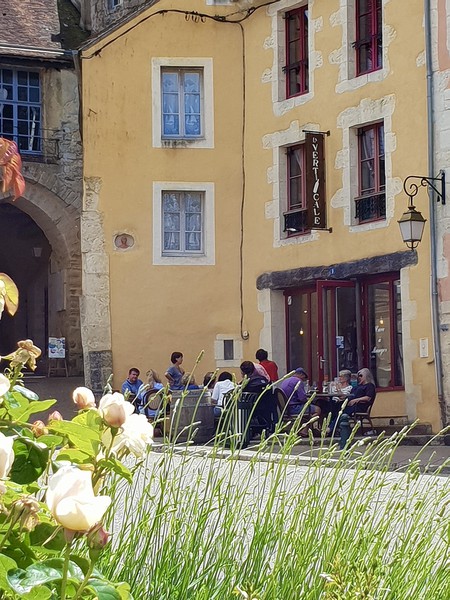 Stop off at La Verticale for baked camembert | © B. Collier

The bijou village of Camembert itself is an hour and 15 minutes’ drive away, but makes a good stop as you continue north; pop into the local farm Fromagerie Durand to see it being made. The village is slap-bang in middle of the Pays d’Auge, an area of cider orchards and calvados distilleries which blaze with dazzling white blossom in spring. 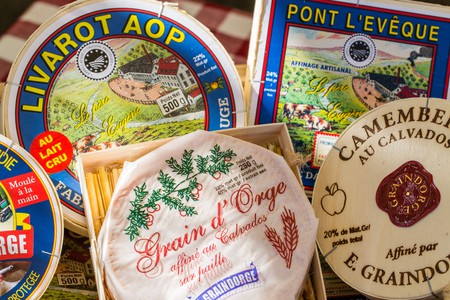 You can learn about all things calvados at Pont L’Évêque, 50 minutes north, where the Calvados Experience, part of the Père Magloire distillery, offers a multimedia tour complete with a chance to sip the heady spirit at the end.
Another cocktail favourite is the herbal liqueur Benedictine, made at the ornate Palais Benedictine in Fécamp on the Alabaster Coast. This striking neo-gothic palace was built in 1898 by savvy wine merchant Alexandre Le Grand, who spotted he was onto something when he rescued the medieval recipe from obscurity. Sign up for a cocktail-making class (a Singapore sling is de rigueur) and take a tour of the distillery and art gallery. Head east along the inspirational coastline to the market at Dieppe – recently voted the best in France. Here you can cram the car with cheese, cider and calvados, dip into a local resto for marmite dieppoise – an irresistible stew based around locally caught fish – then double-back to catch the ferry home from Le Havre.

If you didn’t fill up on marmite dieppoise, treat yourself to an equally delicious meal on the way back across the Channel freshly prepared by the brilliant French chefs aboard Brittany Ferries, happy in the knowledge that your hosts will be taking extra precautions to keep you safe and make your journey a thoroughly enjoyable one. 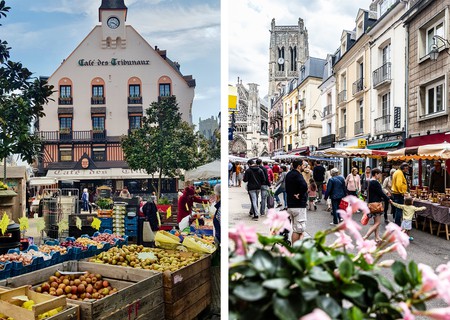 Load up on local produce at Dieppe market before heading home | Left: @ B. Collier - Normandie Tourisme | Right: © A Lady in London

Whether you’re thinking of visiting Normandy, Brittany or the Atlantic Loire Valley regions of western France, make the famous Channel crossing with Brittany Ferries and start your adventure from the moment you get on board.