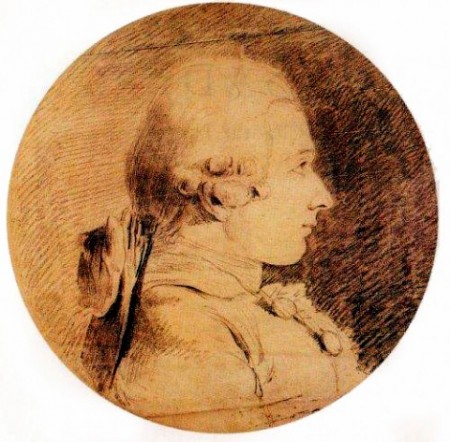 I can discover no story, there is no introduction which might give a key to its purpose, and the pages above mentioned, written as they are as if composed by a more or less illiterate vulgar woman, form an entirely detached part of this production. In my opinion, there is more, and a great deal more than mere vulgarity or coarseness, there is a great deal of unmitigated filth and obscenity.

So wrote Sir Archibald Bodkin, British Director of Public Prosecutions, in 1922, when asked by his government to give his thoughts on James Joyce’s Ulysses. The Home Office duly followed his advice, and outlawed the book on charges of obscenity; a ban which would only be lifted in 1936, two years after a similar censorship had been repealed in the US. The pages to which we owe this reaction are nothing more than the novel’s last, known as the ‘Penelope’ chapter, whose most offending parts involve one or two tame mentions of sex, some menstruation, and a distinct lack of punctuation.

That the era’s other famous banned books, Lady Chatterley’s Lover and Tropic of Cancer, offer little more in terms of lubricity shouldn’t be all that surprising. Their “obscenity,” if it should be called that, was never more than an unabridged view of life, depicted with the help of a few choice, risqué words. That definition is a far cry from what can be found in the works of the writer whose very name now defines erotic horror, the Marquis de Sade. One can only imagine how aghast Bodkin and his ilk would’ve been had they come in contact with Sade’s fiction; “unmitigated filth and obscenity” seems to fall a little short of the mark. 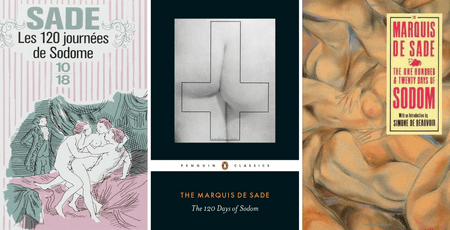 Not that the risk was very high. Most of the Marquis de Sade’s writings were translated in the second half of the twentieth century, after they had become readily accessible in France. His most notorious novel, The 120 Days of Sodom, now for the first time available ‘untamed’ (to paraphrase the translators) in English, wasn’t itself properly published anywhere until 1931. The text is unfinished, written while Sade was in prison, and subsequently lost when he was transferred from the Bastille in 1789 — a mere 11 days before the revolution. Thought to have been destroyed, the manuscript surfaced more than a hundred years later in Germany in the hands of Iwan Bloch, commonly referred to as the ‘first sexologist.’

The 120 Days of Sodom is, by all standards (including the Marquis’ own), the most vile and disturbing book you could ever read, something no Penguin Classics drapery should be able to cover. The plot itself, unlike Ulysses, is fairly straightforward, and carefully structured to allow the author to present a great number of perversions in a clear and comprehensible manner: We are at the end of Louis XIV’s reign, in the early eighteenth century, and four rich French libertines have barricaded themselves for four months inside a castle lost somewhere within the Black Forest. With them is an assemblage of 36 victims — 16 of whom are pubescent boys and girls kidnapped from their families — gathered to be submitted to their captors’ every sexual whim. Keen to regiment the proceedings, the hosts have hired four experienced prostitutes to recount, in the evenings, stories of perversions they’ve encountered (150 each, for a total of 600), which will direct the goings-on inside the retreat. Each month is set to feature tales of increasing depravity; the first is dedicated to the “simple passions,” the last to “the greatest atrocities and abominations.”

If the idea of framed narratives points to medieval literary classics like The Decameron and One Thousand and One Nights, Sade’s setting is firmly at home within the genre of gothic fiction. There can be no mistake: this is a novel less concerned with erotica than it is with horror (even if the Marquis doesn’t appear to think the two are mutually exclusive). The story — at times witty, even darkly humorous — progresses towards the most revolting denouement. As a result, though the book initially threatens to be ironic —

A thousand other horrors, a thousand other abominations accompanied and followed this one, and our three brave champions, as the Bishop was dead to the world — our valiant athletes, as I say, […], retired with the same wives they had sat with on their sofas during narration.

— it eventually transforms into a gut-wrenching read of the most spectacular violence, of which I hope you’ll excuse me if I don’t quote in detail:

116. He tears off several nails from her fingers or toes.
117. He cuts off her fingertip. 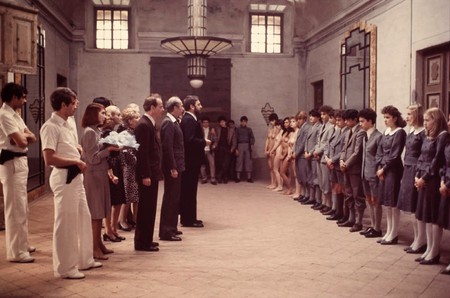 A scene from the film Saló, or the 120 Days of Sodom by Pier Paolo Pasolini | ©United Artists

The sadist as classic

It is perhaps the greatest testament to Sade’s talent that the language he uses adapts itself fully to the tasks set for it, something the translators have rendered admirably. The prose is thus able to oscillate between violence — words like ‘fuck’, ‘bugger’ and ‘cunt’ are as conspicuous as the actions that call on them — and sardonic beauty:

The night finally unfolded like all the previous ones, that is to say in the depths of delirium and debauchery; and when golden Aurora had come, as the poets say, to open the gates of Apollo’s palace, this god — something of a libertine himself — mounted his azure chariot only to bring fresh lubricious acts to light.

As Will McMorran, one this edition’s translators, pointed out when I talked to him, the fact that The 120 Days of Sodom is unfinished probably helps it in its evolution. Only the introduction and the first month are written in full, whereas the other three are in note form, and include only the requisite information (of which the quote above, featuring the numbers 116 and 117 accompanied by terse statements, is an example). The effect is, as he put it, “extraordinary,” a “brutal aesthetic”: a language that entices the reader towards the full-blown “physically revolting” intensity of the book’s latter parts. It is, in essence, the only great work of literature in which the consumer is the victim (a trait common solely to awful books, I should add).

Throughout all of this, Sade doesn’t let much transpire about his own stance. He is, as McMorran puts it, an “unreliable author, always hiding behind the characters.” That he has empathy for the suffering captives is evident the whole way through, an attitude no doubt informed by the fact that he was himself a prisoner at the time of writing. Nonetheless, as William Blake famously said of John Milton (he was “of the Devil’s party without knowing it”), it seems highly probable that the Marquis was ‘philosophically’ with the libertines. Their chilling rationale, repeated all over the novel, impresses as the book’s raison d’être. A matter made all the more troubling when one knows Sade had been imprisoned for getting in on the act, so to speak. Here is the character of the Duc explaining himself:

It is from Nature that I received these tastes, and I should offend her by resisting them — if they are wicked, it is because they serve her purposes. In her hands I am nothing but a machine for her to operate as she wishes […] — I should be a fool to resist her.

Or again, this time from the narrator:

It is moreover proven that it is horror, foulness — something ghastly — that we want when we are hard, and where better to find this than in a corrupt object? Certainly, if it is filth that gives pleasure in the lubricious act, then the greater the filth, the deeper the pleasure, […], ugliness is the extraordinary thing, and all ardent imaginations doubtless prefer the extraordinary thing in lubricity to the simple thing.

And it is precisely this issue which makes The 120 Days of Sodom a special book. To present evil in a meticulous and straightforward manner is one thing, but to rationalize and portray it as the only ‘valuable’ way of life, and so in the most chilling debonair prose, is another matter. It makes, as Georges Bataille remarked in his critique, a deeply moral work: Because Sade is unafraid to look at the very worse, he is able to understand, and make us see, life in a more complete way than we could without him.

This is an idea Gore Vidal, another postwar intellectual, summarized at the end of his famous review of Suetonius’ The Twelve Caesars (biographies of Roman rulers first published in Latin in AD 121). This ancient work could also be qualified as something of a survey of depravity, so unafraid was its author to explore a side of the emperors most would rather shy away from. To Vidal, the book “reflects not only them [the emperors] but ourselves: half-tamed creatures, whose great moral task it is to hold in balance the angel and the monster within — for we are both, and to ignore this duality is to invite disaster.”

The 120 Days of Sodom, for all its atrocities, its repugnance, is a classic for that very reason: it invites us to remember that horror is real. Something postwar writers were, for good reason, keen to remind us.

THE 120 DAYS OF SODOM
by the Marquis de Sade,
translated by:
Will McMorran, Senior Lecturer in French & Comparative Literature at Queen Mary University of London, and Thomas Wynn, Reader in French at Durham University
Penguin Classics
464pp. | $18 | £12.99