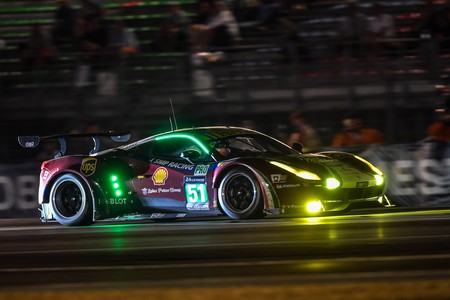 There are longer races. There are more glamorous races. There are even more intense races. But nothing quite matches the ferocious reputation of 24 Hours of Le Mans. A reputation, that we found out first hand, was thoroughly well deserved.

We spent our first Le Mans experience in the company of Ferrari and Shell, two companies that have had a hugely successful working relationship and names that are closely associated with motorsports in its many forms.

As well as taking in the atmosphere, which is more akin to a music festival than a typical racing event, we spoke to Ferrari drivers past and present, as well as the team at Shell, to find out the what it takes to meet the unique challenge Le Mans offers up.

Even casual motorsports fans know about Le Mans. From old races, seen through grainy video images, which were as dangerous as they were thrilling, to the technical spectacle of modern-day events, the race is ingrained in the public consciousness. 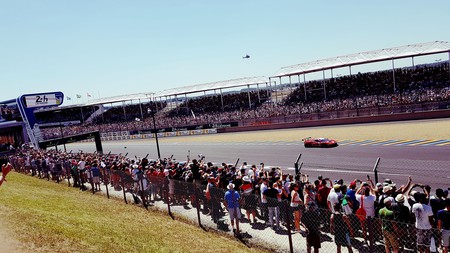 Last year saw one of the most dramatic climaxes in the 94-year history of the event. With the finish line fast approaching, the Toyota leading the pack suffered a technical glitch, allowing Porsche to take victory. It was a heartbreaking moment, but also one that highlighted how thrilling these races can be. Even after 23 hours of non-stop action, there were more twists to be had, and it was a similar story this year.

‘It’s on the same level as F1 but the atmosphere and environment is so different. You will enjoy it a lot. The performance levels are just as high, but the concentration is elevated for endurance races. Maybe a few years ago you could start a little bit slower, to avoid stresses, but now it is a 100% sprint race over 24 hours. You have no time to rest, and that is the biggest difference. We push like crazy for a whole day.

‘We try to rest as much as possible the day before, but you have to be full of energy too. We have massages when we swap drivers, but you can’t switch off that easily. The average speed is very high, but the track is also very long.’ 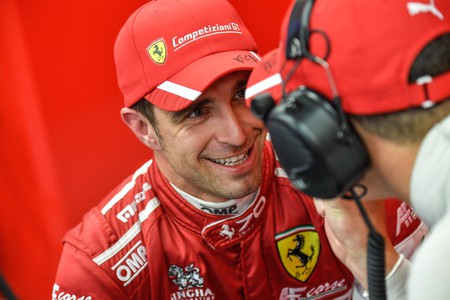 We found this out when we toured the track at night. It took the best part of an hour (including a few short stops) to complete a circuit. Admittedly we were in a large people carrier.

‘You don’t see much apart from the track when you are behind the wheel, but sometimes you catch something or even smell the barbecue coming from the stands! When you get safety cars or slow zones, you see more. For Ferrari Le Mans is super important. All the manufacturers see it as a key race of the season. We are prepared and focused.’

And with that, Alessandro and his co-drivers headed off for the start of the race. 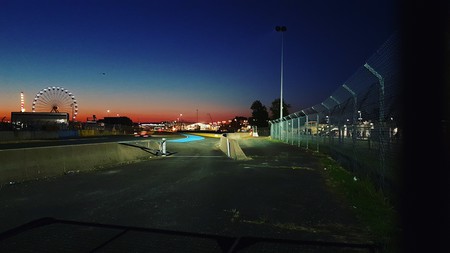 The technical challenge wasn’t just mechanical. Shell, who provided the fuel for the cars, were on hand to see that everything ran smoothly.

‘We supply 270,000 litres for this weekend,’ Peter Fordemann, senior key account manager for motorsport, told us during the race as we took a tour of the pits and garages. ‘In our experience only 50% of the cars will finish but we have to be prepared for everything. We introduced a diesel in 2007, and that was the most exciting project we did at Shell. Were we going to try and win with a tractor?’

‘We moved the thinking so far away from what was happening. Then we saw the cars going around and coming in, we had goosebumps. In general the fuel is not available commercially, and it is developed with the manufacturers. This one here is the final version that is specifically made for endurance races. It’s all stored in one tank in Hamburg that is made in one batch.

‘We think so far ahead, it’s not something we do everyday but the applications often come in somehow for general use. The track to road, for Shell is essential. We wouldn’t be doing it, if there wasn’t that technical aspect. What components can we put in to increase engine reliability, economics and efficiencies,’ Fordemann added.

Although this Shell V-Power fuel is specially designed for Le Mans, a lot of the information gathered goes into making the Shell V-Power on the pump as good as possible.

As the race continued long into the night, so did the party. Vast motor homes housed not only hospitality areas, but also bars, restaurants and even nightclubs. It was a world away from the scene decades ago.

We spoke to former Ferrari driver Jean-Paul Libert to find out more.

‘It’s changed a lot. We had far fewer finishes, so on a technical level it’s a different approach. We had to manage everything in the 70s and 80s, but now it is flat out. You had more “gentleman” drivers. Today they are nearly all professional, apart from a few classes. The track, too, has changed. There are chicanes and less jumps, but that makes sense for safety reasons.’ 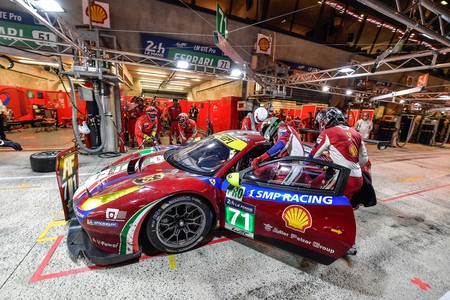 One positive change that Libert has noticed is the engagement with the public and the use of social media.

‘There are now a lot more activities and it is better organised. When I first raced here, in 1980, I was straight out of university. They never showed times like they do now, we had boards and telephones! Le Mans, Indianapolis (500) and Monaco are the three icons for people. When I raced for Ferrari, we bought the car for what works out as £25,000 and when I saw it again recently, the value was $3m. That’s what we did. We buy the car, race and then sell them,’ Libert added.

The former driver told us how he basically made it to Le Mans for the first time off the back of a university thesis, and to bring the different parts of his homeland, Belgium, together.

‘My thesis at university was with the old blue Ferrari. We created a marketing case and the money collected was used to fund out race. The French and Flemish communities needed to be united and so we tried that, and this was also a European community… not Brexit, [laughs]. We built a small company from scratch. We started in February and were in Le Mans by June in the same year!’

As the 2017 race entered the final stages, the unexpected leaders were the Jackie Chan (yes, THAT Jackie Chan!) team. Following yet another series of dramatic events, the lead changed several times more with Porsche eventually coming out on top.

Even if you think watching cars go around a track for 24 hours is a tedious spectacle, the drama, glitz and sheer passion of Le Mans is bound to win you over in the end.
You might also like: Here’s Why This Zero-Alcohol Beer Is Going to Be a Game Changer