Where to Stay in Bordeaux: A Neighbourhood Guide to La Perle d'Aquitaine 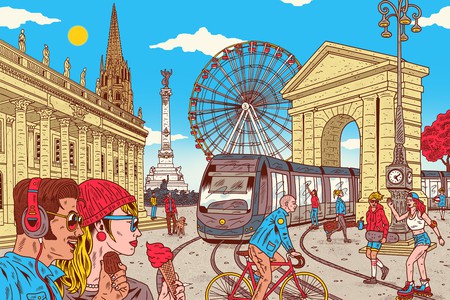 From sophisticated Chartrons to colourful La Bastide, Bordeaux offers a neighbourhood to suit every taste. Whether you’re staying for a day or a month, find out which Bordeaux quartier you’ll want to call home with help from local creatives and entrepreneurs.

With so many attractive and accessible options on offer, you really can’t choose wrong when it comes to Bordeaux’s neighbourhoods. The city centre, lauded for its fairytale architecture and endless entertainment options, is compact and easily walkable, while the surrounding residential areas – just a short tram ride away – each have their own distinctive character. This guide to Bordeaux’s neighbourhoods will help you make the most of your stay in the wine capital of the world.

For a short and sweet visit to Bordeaux, consider a stay in Saint-Pierre or Saint-Paul. From here you can hit the ground running – or, more likely, lazily wandering the historic centre’s narrow cobblestone streets. This is the heart of the city, bounded by some of its most famous landmarks: the Garonne river to the east, the Grosse Cloche bell tower to the south, the Rue Sainte-Catherine (Europe’s longest pedestrian shopping street) to the west and the Cours du Chapeau-Rouge to the north.

Once a busy trade hub, this area now welcomes visitors of a different kind, who come to marvel at the Place de la Bourse (a palatial pedestrian square with a reflecting pool), stroll the riverside quais, or eat an unforgettable meal. Check out the stylish boutiques on the Rue Saint-James or the church-turned-cinema Utopia to catch a glimpse of the real Bordeaux. After an afternoon exploring, grab a seat at one of the many restaurant terraces spilling out onto the Place du Palais or Place Fernand-Lafargue.

West of Saint-Pierre is the equally historic neighbourhood of Pey-Berland, best known for the mighty Cathédrale Saint-André and its freestanding bell tower, the Tour Pey-Berland. From here, history buffs and art lovers will be within walking distance of some of the city’s best museums: the Musée d’Aquitaine, the Musée des Beaux-Arts (Fine Arts Museum) and the Musée des Arts Décoratifs et du Design (Museum of Decorative Arts and Design).

The pedestrian streets spreading north of Pey-Berland are lined with cheerful cafés, upscale boutiques and eclectic art galleries, almost all of which are independent. “It’s really the arts and design district of Bordeaux,” says Christelle Dabouis, co-owner of art boutique and gallery Métis with her husband, Benjamin. “All of the local creators, galleries and shops give it a really authentic vibe.”

Just north of Saint-Pierre and Pey-Berland are Les Quinconces and Le Triangle d’Or. Named for the Esplanade des Quinconces, a massive square that hosts everything from sporting events and circuses to concerts and flea markets, Les Quinconces is also a transport hub, making this neighbourhood a great choice for those who want to minimise walking or venture farther outside the city centre.

Le Triangle d’Or (Golden Triangle), unites three central boulevards and three notable plazas. Foremost among these is the Place de la Comédie, dominated by the Grand Théâtre and its Neoclassical colonnade. While this kind of grandeur is characteristic of the Triangle d’Or, it doesn’t tell the whole story: “The neighbourhood has a historic, traditional feel, but there’s a sense of community, too,” says Eric San Augustin, owner and founder of local co-working space WIGI. “That’s what I like about it. The mix between the two.”

Chic Chartrons, upriver from Les Quinconces, used to be the centre of the Bordeaux wine trade. Today it’s better known for its high street, the Rue Notre-Dame, teeming with cafés, boutiques and antique shops. Local favourites include La Pelle Café for coffee, Juliena for a quick bite and Do You Speak French? for clothes and accessories.

Staying in this area might trick you into thinking you’re in a small French village – at least until you stumble onto Sunday’s riverfront market or the expansive Jardin Public. Neighbouring Paul Doumer is the perfect compromise for those who want some peace and quiet without straying too far from the city centre.

North of Les Chartrons, you’ll find Les Bassins à Flot, a swampland-turned-dockland-turned-urban-wonderland. This grunge-to-glam makeover is due in no small part to recent additions such as the Cité du Vin wine museum and the Musée Mer Marine (MMM), an airy museum dedicated to maritime history. “Between the docks and the water basins, it was the perfect location for us,” says MMM founder Norbert Fradin. “No other city the size of Bordeaux has an area of calm water this large. It’s incredible. It’s improbable. And it’s been very exciting to be part of the neighbourhood’s revival.”

Further changes can be seen at the Halles de Bacalan, an upscale food market built in 2017, and the Base Sous-Marine, a World War II submarine base soon to become the world’s largest digital art centre (the Bassins de Lumières). Music lovers should plan for an evening on the IBOAT, a ferry remodelled into a three-storey concert hall and club.

If your Bordeaux bucket list is full of trendy restaurants, bustling markets or dizzying nightlife, you might want to aim for the city’s south side. Saint-Michel and La Victoire are particularly popular with Bordeaux’s student and artist populations for their affordability and accessibility (the train station is just minutes away).

While the area has changed a lot in recent years with the influx of hipsters and Parisians, its boisterous spirit hasn’t. “It still has a bit of a wildness to it,” says Franck Audu, head chef at neighbourhood fixture La Tupina, “but there’s a warmth and friendliness too.” Local residents love the Sunday flea market at the foot of the Basilique Saint-Michel almost as much as they love the farmers market at the Marché des Capucins (open every day except Monday).

La Bastide and the Rive Droite

Crossing Bordeaux’s scenic Pont de Pierre (stone bridge, though it’s mostly brick), you’ll discover the Rive Droite (right bank) and its newly rehabilitated neighbourhoods. The closest, and most popular, is La Bastide, stretching northeast along the right bank of the Garonne. Locals come to this area for a walk or jog along the riverside Parc aux Angéliques, a tour of the Jardin Botanique, or an apéro at La Guinguette Chez Alriq, a beloved open-air bar and concert venue.

A hotel or Airbnb on the Rive Droite is a great option for budget-conscious travellers who still want to be near the action – or who plan to spend most of their time at the Darwin Eco-Système, an eco-friendly arts and culture venue with a restaurant, organic grocery, skate park and free expression spaces for graffiti artists.