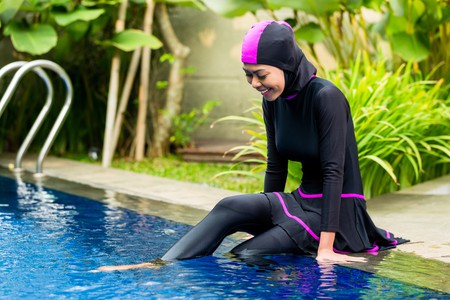 Woman wearing a burkini relaxing by the swimming pool/Shutterstock Images

The question of whether or not the burkini (a modesty swimsuit for women) should be allowed at swimming pools and beaches has again caused controversy in France after a women said she was banned from wearing her burkini in a swimming pool in La Ciotat, near Marseille. Last year, pictures of policemen asking a Muslim women to take off her burkini at a beach in Nice had sparked an international outcry and triggered a heated debate in France. Back then, Chritian Estrosi, Nice’s mayor and other mayors across France had passed “anti-burkini” prefectoral decrees to ban the burkini from their cities’ swimming pools and beaches.

Woman wearing a burkini relaxing by the swimming pool/Shutterstock Images

This time, a Muslim woman vacationing with her family in a private residence in La Ciotat (a southern coastal city close to Marseille) said she was banned from wearing a burkini in the premises’ common pool by the residence’s owner. She shared her story on the website of the Collectif Contre l’Islamophobie en France (CCIF), which is an organization fighting against Islamophobia and discrimination against Muslim people in France. On this website, she explains that the residence’s owner asked her to leave the private pool because he had allegedly received several complaints from other residents about a “veiled women refusing to leave the pool and bathing in her regular clothes.”

“I have never received a complaint from other residents nor bathed in my regular clothes,” she said. “I was truly disappointed, in shock and hurt because he made false claims to covert his obvious prejudice against my religious belief.”

The woman’s husband added that the owner refused to give them back their €490 deposit, claiming that the money would cover the fees of the cleaning and the two-day closing of the pool since his wife engaged in an “unsanitary behavior”. The husband denunciated what he called “fallacious claims” and also told the CCIF website that the pool was never closed and the owner was never able to show receipts proving that any damage or work was made at the pool. 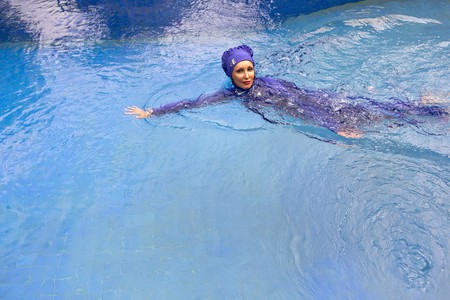 The debate about the burkini and Muslim women covering their heads has been ongoing in France for many years. People arguing against the two pieces of clothing claim that Muslim women covering themselves are oppressed, should have the freedom to show their bodies freely and that any ostentatious sign of religious belief must not be tolerated in public places and should be purely banned. On the other side, people argue that every woman should be allowed to cover herself if she wishes to, and that the real issue behind the burkini and hijab ban is covert Islamophobia and prejudice against Muslim people living in Western countries.