Churches To Visit In Lyon, France

Lyon is a third largest city in France and is rich with religious sites, known for their architecture or historical importance. Christian communities settled in Lyon as early as the II century, while Lyon was still called Lugdunum and was a part of the Roman Gaul area. Our guide of the best churches of Lyon gives an insight into the important sights of Christian interest in this ancient city. 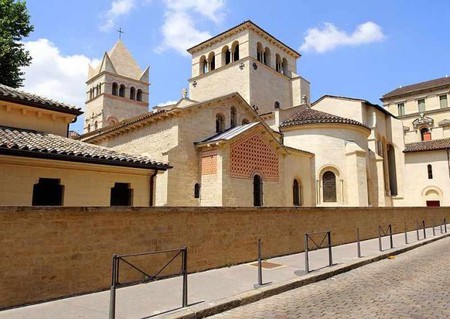 In the historic center of Lyon, located between two rivers, is a Romanesque Benedictine – the Basilica St Martin d’Ainay. Its architecture is not very remarkable and is a mix between pre-Romanesque, Romanesque, and Gothic styles. However, it is worth a visit as it is one of the oldest churches in Lyon, constructed in 1107 and illustrates how defense was an important aspect of construction. During the French revolution, the church was used as a grain store, which most certainly saved d’Ainay from destruction. The church was restored and enlarged in XIX century in a Romanesque revival architectural style, which is how it still looks today.
Opening hours: Mon-Sat 8:30am-12pm and 2:30pm-6pm; Sun 8:30am-12pm
11 Rue Bourgelat, Lyon, +33 472 400 250

You will find Église Saint-Georges on the banks of the River Saône and in Lyon’s tourist epicenter – Vieux Lyon district. This church had a turbulent history. It was originally built in 550, destroyed around 732, and restored in 802, and at some point was even used as a hay barn. Église Saint-Georges was restored again in the late 19th century by Pierre Bossan in a neo-gothic style. The architect also designed the furniture, which you can see inside. Another point of interest inside the church is the XVI century altarpiece showing the coronation of the Virgin.
Opening hours: daily 8am-6pm
Quai Fulchiron, Lyon, +33 472 770 790

Cathédrale Saint-Jean-Baptiste de Lyon is a XII century Romanesque and Gothic cathedral that took over four centuries to build. Saint Jean Baptiste is famous for its beautiful original stained-glass windows. The interior of the cathedral is not as impressive as the architecture outside. However, it is praised for its simplicity and the feeling of austerity it imparts. If you visit Saint Jean Baptiste, make sure to wait for its astronomical clock that goes off every day at noon, two, three, and four in the afternoon, and witness moving figures depict the Annunciation scene.
Opning hours: Mon-Fri 8:15am-7:45pm, Sat 8:15am-7pm, Sun 8am-7pm
70 Rue St. Jean, Lyon, +33 478 547 621

Built in the 19th century with private funds, La Basilique Notre Dame de Fourvière sits on top of Fourvière hill, and from its North tower you can see a 180 degrees panorama of Lyon. From the church, tourists can take a promenade to Rosier Gardens, which also offer picturesque sights of Lyon. The basilica is built in a Romanesque and Byzantine style, and was designed by Pierre Bossan, who has also planned Église Saint-Georges. It is a must visit for the richly decorated interior, stained-glass windows and the mosaics are truly a thing of wonder.
Opening hours: daily 7am-7pm
8 Place de Fourvière, Lyon, +33 478 251 301

The beginning of Iglesia de St-Nizier goes back as far as the V century. During the centuries it was set on fire and ravaged several times, and the church that we see now was finished in the 16th century in the Gothic style. Iglesias de St-Nizier is not as impressive, extraordinary or grand as other churches in this guide, but it’s simple, authentic and a great place to visit for a calming and beautiful Sunday mass.
Opening hours: Tue-Sun 8am-8pm, Mon 2pm-6pm
1 Rue Saint-Nizier, Lyon, +33 472 411 805