The Best Things To See and Do in Lyon 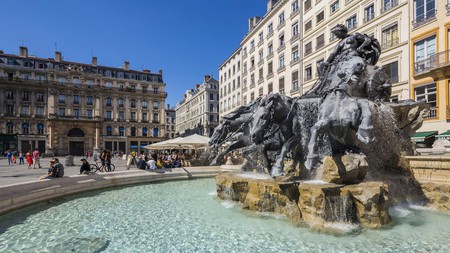 First founded by the Romans in 43BCE, Lyon, which sits at the confluence of the Rhône and Saône rivers, has been an important cultural and economic hub for around 2,000 years. Now the third-largest city in France, it’s the gateway to the mountainous Rhône-Alpes, but its rich history, impressive architecture and world-famous cuisine make it worth a visit in its own right. Here are our recommendations.

Church
Facebook
Email
Twitter
Pinterest
Copy link
Share
Lyon’s answer to Sacré-Coeur occupies a commanding position on the Fourvière hill, offering impressive views over the city. Built between 1872 and 1884 on the site of the old Roman forum, the bright white basilica celebrates the role the Virgin Mary is supposed to have played in saving the city from the advancing Prussian army during the Franco-Prussian war of 1871. Nicknamed “the upside-down elephant” by locals, the cathedral’s architecture is unusual in drawing primarily on Romanesque and Byzantine influences, rather than the neogothic style that was fashionable at the time. Look out for the mosaics depicting scenes from the life of Joan of Arc inside, and make sure you leave enough time to walk around the grounds and take in the view.

In a city as studded with architectural gems, it can be easy to rush from sight to sight and miss the interesting bits in between. So leave yourself a decent chunk of time to wander slowly through the narrow, winding streets, of Vieux Lyon ducking into the little boulangeries, boutiques and cafés, and getting pleasantly lost in the process. Made up of three distinct districts, Saint Jean, Saint Georges, and Saint Paul, the entire area has now been declared a Unesco World Heritage site. It’s also one of the best places in town to sample the delights of the bouchons – traditional restaurants that specialise in the tripe and offal-heavy dishes that the Lyonnais love.

Quick quiz: what’s the birthplace of cinema? Nope, it’s not Hollywood, or anywhere in the US for that matter. It’s Lyon, where the Lumière brothers lived and worked while they were developing their cinématographe, the combination movie camera and projector that was the first such device to enter widespread use. Indeed, the first film shown during the 1895 soirée that’s generally recognised as the world’s first cinema screening was a 46-second clip called Workers Leaving the Lumière Factory in Lyon (there were no prizes for clever titles). The brothers’ world-changing legacy is celebrated in the Musée Lumière. Founded by Louis Lumière’s grandson in 1982, its well-organised, informative displays occupy the family’s old villa, and one hangar of what used to be their factory. If you’re even remotely interested in the history of cinema, this is a must-visit.

The celebrated cinematic pioneers are not the only lumières associated with Lyon. Every December, the city is taken over by the Fêtes des Lumières, or Festival of Lights. The tradition dates back to 1643, when Lyon’s citizens lit candles to thank the Virgin Mary for sparing them from an outbreak of the bubonic plague. These days, the annual celebration sees mind-bending light installations projected onto the city’s most spectacular buildings, and there’s no better place to appreciate the splendour than the Place des Terreaux. Located between the two rivers, this majestic square is fronted on one side by the Musée des Beaux Arts, and on another by the Hôtel de Ville (town hall). It’s spectacular at any time of year, but particularly special for the four days in December when the world’s greatest light show rolls into town.

You never have to dig particularly deep beneath the surface to find evidence of Lyon’s Roman origins. In fact, sometimes you don’t have to dig at all. The ancient amphitheatre up on the hill at Fourvière, a short walk from the Notre Dame basilica, is not only very visible, it’s still in use – despite being more than 2,000 years old. It regularly plays host to big-ticket rock bands, as well as orchestras, dance troupes and theatre performances. Famously, the Stone Roses played a packed reunion show here in 2012 with the city spread out behind them.

It might not be quite as old as the Fourvière amphitheatre, but the Théâtre des Célestins, on the eastern bank of the Saône, has its own illustrious history. Originally, a monastery belonging to the Celestine order stood here, but the land was requisitioned following the French Revolution, and the first theatre was built in 1792. Napoleon himself apparently watched a play here shortly after it opened, and while the building itself has changed over the centuries, this site has now been staging plays for more than 250 years. Check the website for details of the latest programming.

Lyon has excellent parks within the city limits, but when it gets really hot in summer, residents head out east of the city to the Grand Parc Miribel Jonage. A massive, sprawling area with a huge lake, sandy beaches, restaurants and bars, and even its own golf course, this gives you a flavour of the countryside within easy spitting distance of the city centre. Take the red Métro line all the way to Vaulx-en-Velin La Soie, at the eastern end, and jump on the no83 bus from there.