The Top 10 Things to Do in Bayeux, France 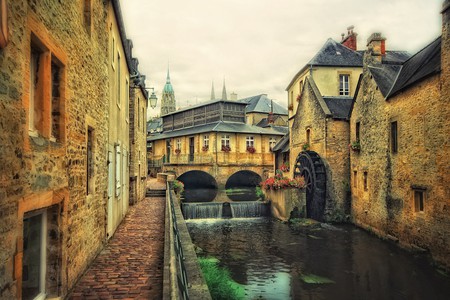 Bayeux seems, in many ways, to be defined by war. It houses the famous tapestry depicting the events of the Norman conquest of England and remnants of World War II are found throughout in the form of museums and memorials. While it’s impossible to forget its sullen past, a visit to this charming medieval town is anything but gloomy. Here are the top 10 things to see and do in Bayeux, France.

Marvel at the architecture of Notre-Dame Cathedral of Bayeux

Located in the heart of Bayeux, the Notre-Dame Cathedral’s construction was originally built in Romanesque style. Gothic features came later on in the 15th century, after the church had endured damage during the 12th. Not only is the church a sight to behold, it is packed with local history. It was sanctified in 1077 in the presence of William the Conqueror, who used the Cathedral to leverage his power. It went on to serve as the setting for the oath taken by Harold II under William’s command, that he would marry William’s daughter in order to better the Duke of Normandy’s chances of taking the crown of England. The oath was subsequently broken and the events that accumulated leading to the Battle of Hastings occurred shortly thereafter. 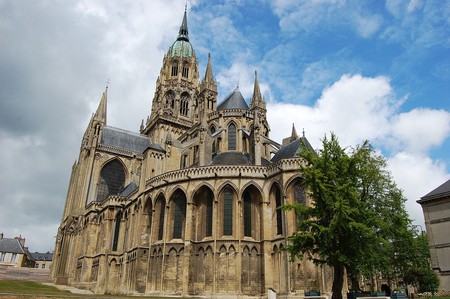 Discover the art of lacemaking at the Conservatoire de la Dentelle

The art of lacemaking in Bayeux dates back to the end of the 17th century when the Bishop of Bayeux, François de Nesmond, brought two Nuns from the Providence of Rouen, Sister Marie Leparfait and Sister Hélène Cauvin, to aid in the management of his office. These Sisters would go on to share with the Nuns of Bayeux how to sew lace, in particular Bobbin lace, which is now considered the region’s specialty. The Conservatoire de la Dentelle (Conservatory of Lace) not only offers the opportunity to learn about the art’s roots through pieces on display, but it’s also a school where those interested can take a private course to learn the trade for themselves.

Retrace the Norman conquest of England at the Bayeux Tapestry

The Bayeux Tapestry (which isn’t really a tapestry at all, rather a hand-stitched embroidery using coloured wool yarn) stretches an impressive 68 metres long. Through detailed images and symbols, the cloth depicts the events (from the viewpoint of the conquering Normans) leading up to the Battle of Hastings in 1066 and the Norman conquest of England. The tapestry is said to have been created within just a few years of the battle, making it an impressive nine centuries old. It has called Bayeux home throughout these 900 years, though will be leaving for the first time ever to go on temporary display in England, where it was originally created, by the year 2020. 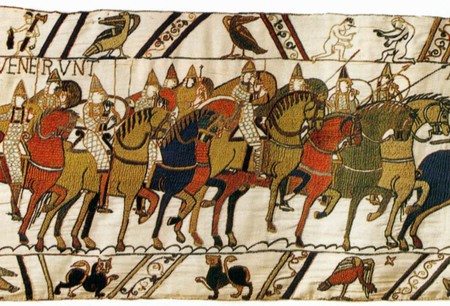 Meander through the Botanical Gardens

The Botanical Gardens of Bayeux date back to the 19th century and are labelled a Historical Monument of France. Their immaculately landscaped grounds span over six acres and were designed by the Bühler brothers, who created other beautiful French parks such as Parc de la Tête d’Or in Lyon and the Parc du Thabor in Rennes. A visit to the gardens is free and a perfect place for a quiet stroll.

Learn about the events of D-Day at the Landing Beaches

Bayeux’s proximity to the Landing Beaches (the closest being Gold Beach) is one of the main reasons why thousands of travellers flock to the town each year, looking to tour the former setting of Operation Overlord, better known as D-Day, from June 6, 1944. There are sites and museums on Gold Beach that can offer some context, such as The America/Gold Beach Museum. However for history buffs looking to get the most out of their visit, hiring a history guide is the best option and easily achieved through a hotel concierge or the Tourism Board. Anyone planning to visit over the week of June 6, the anniversary of D-Day, should be sure to book well in advance. 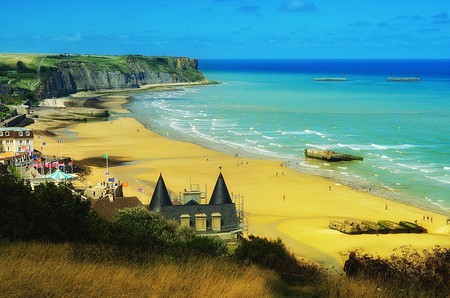 Pay your respects at the Bayeux War Cemetery

The Bayeux War Cemetery is the largest cemetery in France dedicated to Commonwealth soldiers who lost their lives in the Second World War. There are approximately 4,500 graves, a vast majority of which are British, and a Memorial dedicated to the approximately 1,800 soldiers who have no burial site. France assigned the grounds of the cemetery to the United Kingdom in recognition of their losses during the fight for freedom. 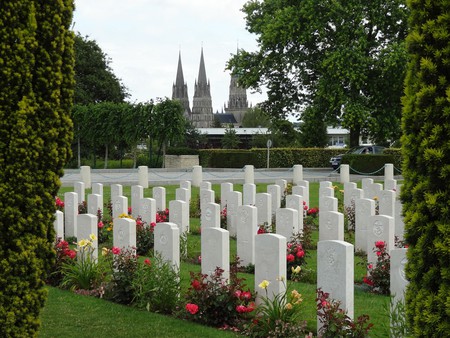 Housed in the former Episcopal Palace of the Bishop of Bayeux, the Baron Gérard Museum has been in existence since 1900, though just reopened to the public in 2013 after being closed since 2001 for renovations. It boasts a fine collection of paintings, archaeological discoveries, and Bayeux porcelain and lace. One of the most notable paintings on display is Gustave Caillebotte’s 1876 piece, Portraits in the countryside, alongside works from other famous French painters such as Eugene Boudin, Camille Corot, François Boucher and more.

Revisit history at the Memorial Museum of the Battle of Normandy

The Memorial Museum of the Battle of Normandy takes visitors through the months of Allied troop advancement into Normandy, from the initial invasion right through to victory. On display are preserved military equipment, such as fighter tanks and smaller arms used by the soldiers, uniforms and other army memorabilia. Visitors are able to follow along through a series of maps and dioramas presented alongside audio and visual aids. The museum is considered to be one of the best in the world for its showcase of the events of D-Day/Operation Overlord and provides a great framework for those who plan to tour the Landing Beaches. 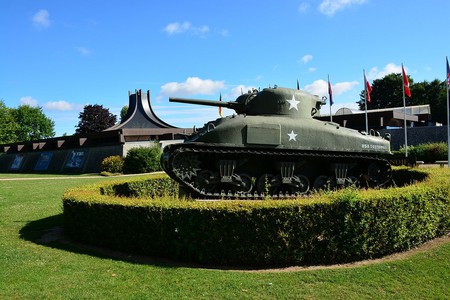 Bayeux’s weekly market takes place every Saturday morning in the Saint Patrice Square. Vendors of all kinds set up shop on what serves as a parking lot for the rest of the week to sell fresh fruits and vegetables, seafood straight from the ocean, and other local Norman goods such as cider, Calvados, and cheese. If you’re just in Bayeux for a short visit and don’t have accommodations where you can prepare your own food, fear not. There are plenty of vendors serving up prepared foods as well such as pizzas, crêpes and choucroute de la mer, which is a medley of seafood on a sauerkraut base.

Take in the Old Town

While so many of Normandy’s towns took a beating during the Second World War, Bayeux miraculously came out unscathed, the result of which is a stunning Old Town that the Aure river gently flows through. Be sure to keep an eye out for the historic waterwheel, a notable Bayeux landmark that makes an appearance in most photos taken of the city, and lends to Bayeux’s charm. 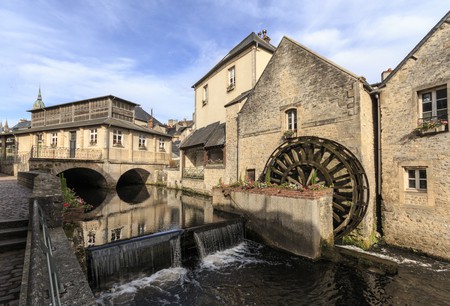