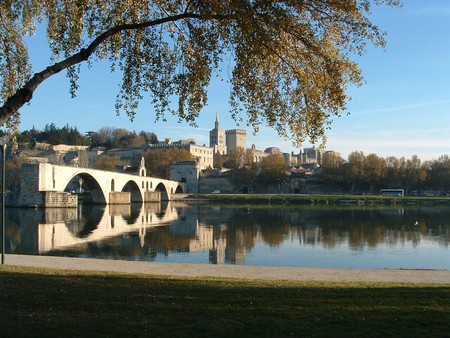 Palais des Papes (the Popes’ Palace) in Avignon is one of the most well-known and beloved monuments in France and a national tourist attraction. It has a history that includes rebellion, enlightenment, pilgrimage, and massacre.

Overlooking an iconic bridge on the river Rhone (made famous by the song, “Sur le pont, d’Avignon”), the palace has seen a lot of history since construction began and provides an astonishing architectural legacy that has dominated the town ever since.

In the 14th century, the papacy moved from Rome to Avignon

When Clement V was elected Pope in 1305, he decided to transfer papal power to Avignon to avoid political unrest in Rome. He chose to build on the foundations of an old Episcopal bishop palace, but it was under Pope Benedict XII in 1334 that the original buildings were really expanded. The site is actually two palaces joined together—that of the original old palace (the “Palais Vieux”) constructed under Benedict XII and that of a new palace (the “Palais Neuf”) begun under Pope Clement VI in 1342. 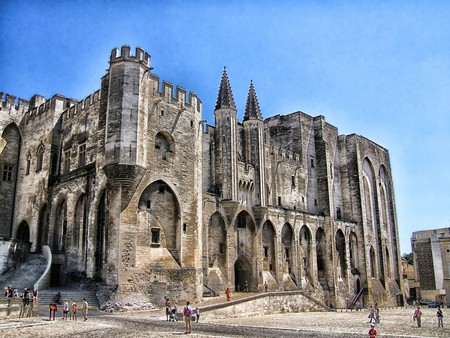 Each successive pope left his mark—the fortified palace has ten towers—and it came to symbolize the mighty influence of the Catholic Church. It housed Europe’s largest library, and became a hotbed for thinkers, philosophers, composers, and musicians. Covering 15,000 square meters, the palace is the biggest medieval Gothic building in Europe and the largest Gothic palace in the world. 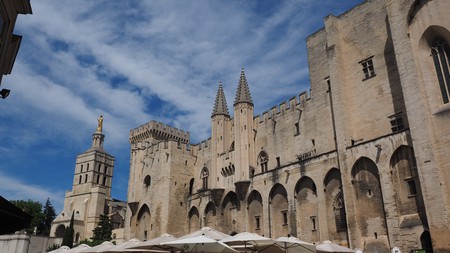 Power shifts back to Rome and the palace is obsolete

Despite its grandeur, the main focus for many of the Popes was on eventually returning to Italy. In 1376, Pope Grégoire XI managed to restore order and reestablish the Holy See back in Rome but two years later, upon his death, Palais des Papes once more came to prominence. A new Italian Pope, Urban VI, was elected in Rome while opposing cardinals elected another pope, Clement VII, to rule from Avignon. The palace came to symbolize the rift in the Catholic Church.

This “antipope,” Clement VII, encouraged the arts and culture and made many further alterations but the palace was gradually fading as the epicenter of Catholic life. By the time antipope Benedict XIII took power in 1394, the church was deeply divided and many people were unsure whether their allegiance lay to Rome or to Avignon. The palace withstood two sieges under Benedict’s rule but he was eventually forced to concede in 1403; the Avignon papal dynasty came to an end and the papacy transferred definitively back to Rome.

The Rhone river is one of the most powerful rivers in France and it’s very long. A wooden bridge was built across it in the 12th century but it was later destroyed during a siege in 1226. Based upon the engineering at Pont du Gard (one of the world’s most famous Roman aqueducts, just up the road), a shepherd called Bénezet began building a new bridge that was 900 meters long with 22 arches. Legend has it that he heard a voice from God telling him to build the bridge in this location and he carried an impossibly large boulder down from the mountains and threw it into the water to lay the first foundation stone. He was later made a Saint. 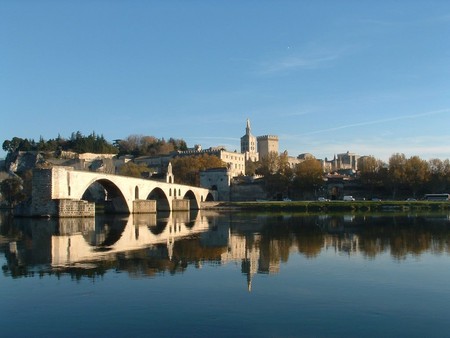 The bridge became part of the pilgrimage route between Spain and Italy in the Middle Ages and was vital for the newfound Papacy in Avignon. It collapsed in the 17th century (Louis XIV was one of the last people to walk across it) and it was deemed too expensive to ever rebuild. One of the most well-known songs, “Sur le pontd’Avignon, on y danse, on y danse” (“on the Avignon bridge, we dance there, we dance there”), was composed to celebrate marriage in the 15th century. Ironically, the bridge is too narrow to dance on, so up until the 19th century, people danced underneath it. Only four arches remain today, and like the Palais des Papes, it became a UNESCO world heritage site in 1995.

Over the following centuries, the palace remained under papal ownership but was only used by visiting dignitaries and slowly fell into disrepair. During the French revolution in 1789, the palace was seized and ransacked and in 1791, many counter-revolutionaries were killed on site during the massacre of La Glacière. The bodies of the dead men were thrown into the Tour des Latrines in the old palace.

Later, Napoleonic forces used the palace as their barracks and even their stables. While they ruined many frescoes during their stay, the building’s usefulness helped it to avoid any further destruction. The entire site was eventually turned over to the public in 1906 as a museum when restoration work commenced.

Today, visitors can stroll around the cloisters, papal bedrooms, and private chapels and marvel at sublime 14th-century frescoes. It’s a 25-room tour. The palace opens at 9 a.m. throughout most of the year (9:30 a.m. in off-peak months), children under eight go for free and if you can prove that you live in Avignon, you won’t have to pay on Sundays from September to June. There are reduced price tickets if you want to see both the Palais des Papes and the Bénezet bridge if you buy both together. Click here for more details in English.