The Most Beautiful Squares in the South of France

The Place de la Mairie in Aix-en-Provence | © Sean Nel/Shutterstock
France has more than its fair share of beautiful squares and the South is no exception. The surprise is really how different they are. You’ll find picture-postcard rural squares depicting an idyllic, rural, French life that still exists in places, side by side with grand squares filled with large Gothic structures and stunning cathedrals.

When Italy was going through a time of social unrest in the 14th century, the papacy briefly moved to Avignon. Over a period of 100 years, a succession of Popes built up the Palais des Papes (the Pope’s Palace) in the centre of Avignon. It’s impressive and the largest Gothic structure in Europe from the Middle Ages. The square that surrounds it, the Place du Palais, is also impressive, and as big in scale as the palace. There are lots of restaurants, hotels and cafés around the square; it’s where the tourist train leaves from and where the kids hang out on the merry-go-round. It’s touristy but essential viewing. 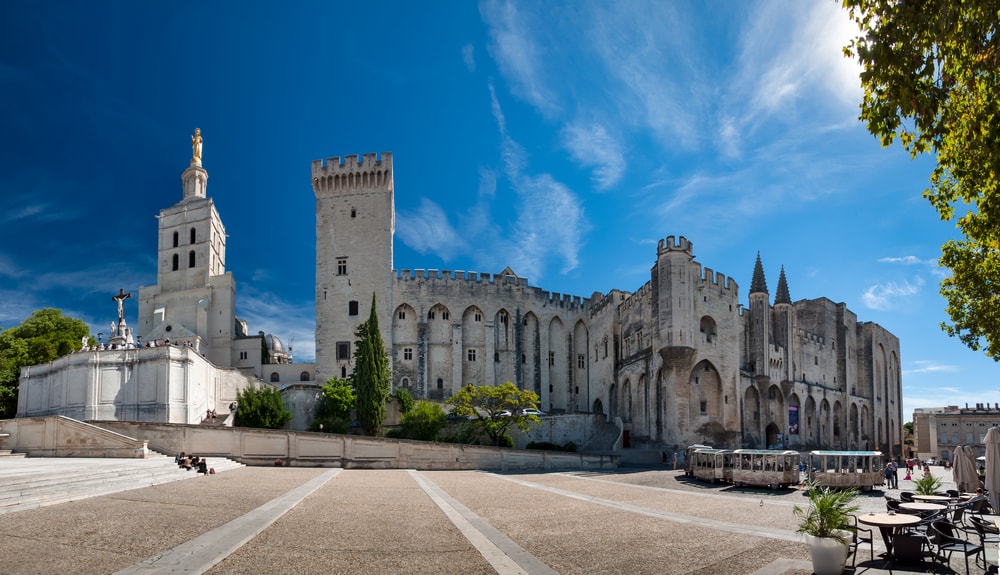 The Albertas family arrived in Aix having been bequeathed a house in Aix-en-Provence centuries ago and it was the son that built this beautiful square to act as a backdrop to theatre performances that he could watch from his house. The buildings around the square were never meant to be lived in (they are apartments now) and are very thin. Albertas was certainly playful; if you look closely the balconies have phallic shapes on the railings. The fountain was added in the last century in keeping with the square. You’ll find concerts here in the lazy summer evenings. 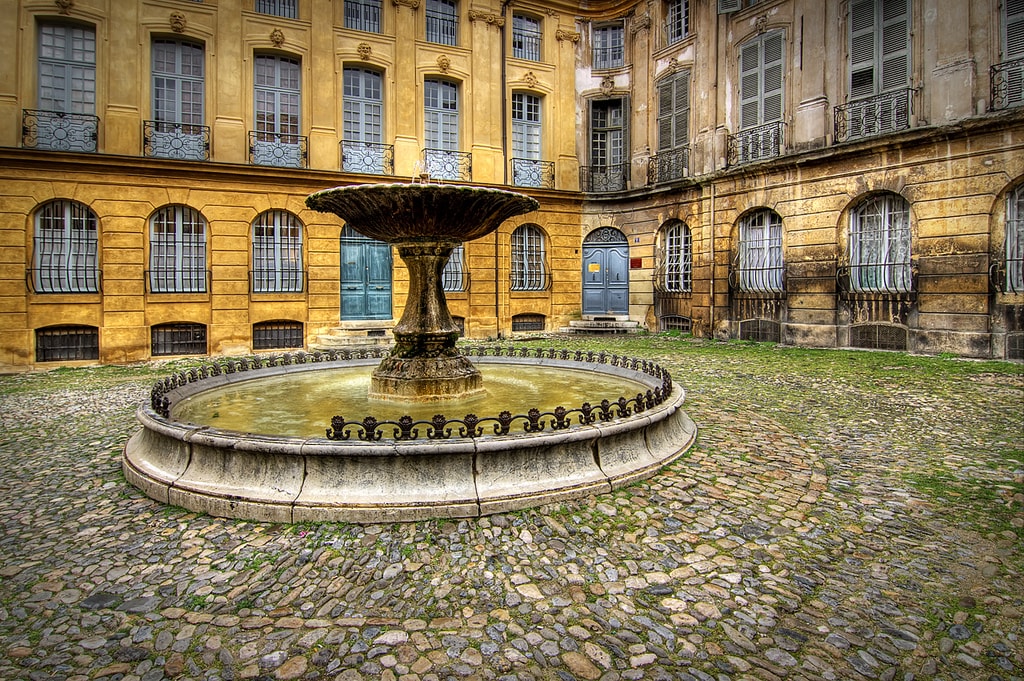 Place Masséna in Nice sits at the heart of the city (it’s very near the infamous seafront boulevard, the Promenade des Anglais) and is where all the major cultural events are held, like Nice’s Jazz Festival or the Nice carnival, one of the largest in the world. It’s very distinctive with its red-coloured buildings, which people sit under while having their coffees and watching the world go by. 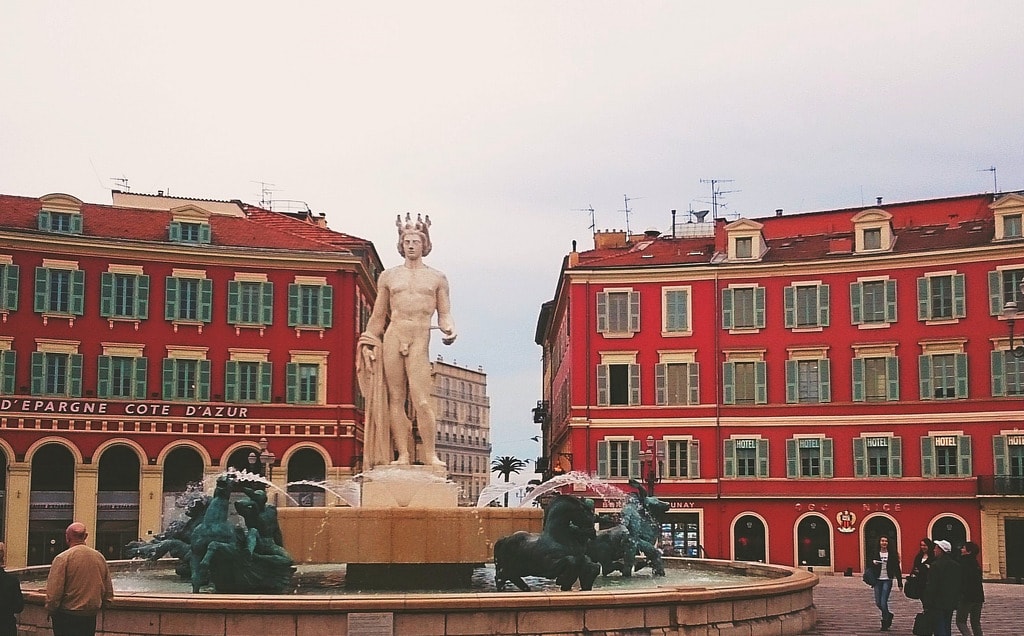 Aix is jam-packed with beautiful squares, each usually completed by its own fountain (Aix is called the city of 1,000 fountains, although there aren’t actually 1,000). The Place de l’Hotel de Ville is where the Town Hall can be found, as well as the post office and the flower market on most mornings (the daily market is held a stone’s throw away in the square next door, Place Richelme). It’s also where you’ll find lots of cafés, French groups holding an inevitable “manifestation” (the French word for protest) under the Mayor’s window, and the clock tower which American tanks rolled under in 1945 to liberate the city at the end of World War II. 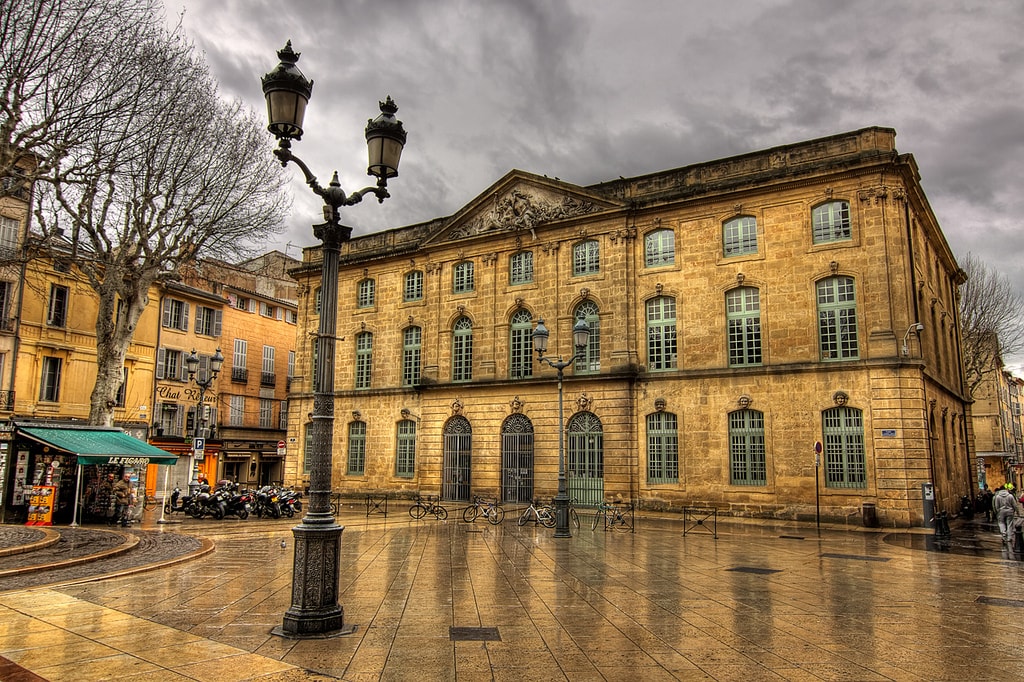 Place de la République in Arles is a grand square that lives up to its grand name – it has not one but two very grand churches around its edge; the église désaffectée de Sainte-Anne d’Arles and the huge Catholic church built in a romanesque style, the église Saint-Trophime. The latter has lots of art sculptures. You’ll often find dogs jumping in and out of the fountain or people eating crepes and ice-creams from the shops in the square. A great place to sit after visiting the nearby Roman amphitheatre. 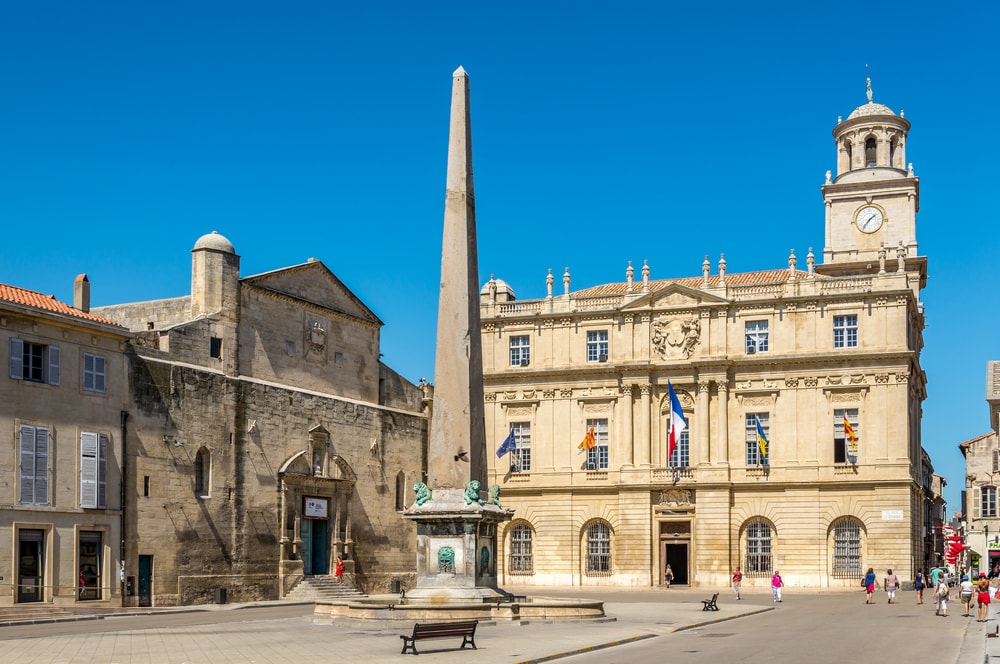 Oppidium is the latin word for “town” and the south of France has two Opèdes. One is still functioning as a town, but Opède le Vieux (“vieux” means old in French) is in stunning ruins. For that reason there is no real address for this square anymore, but its where the old bell tower sits, crumbling in the historical remains that surround it. This is a place to play princess, to run through the moss-covered cobbles and recreate the lives of the people who used to live there. It’s small and a great place for a picnic. 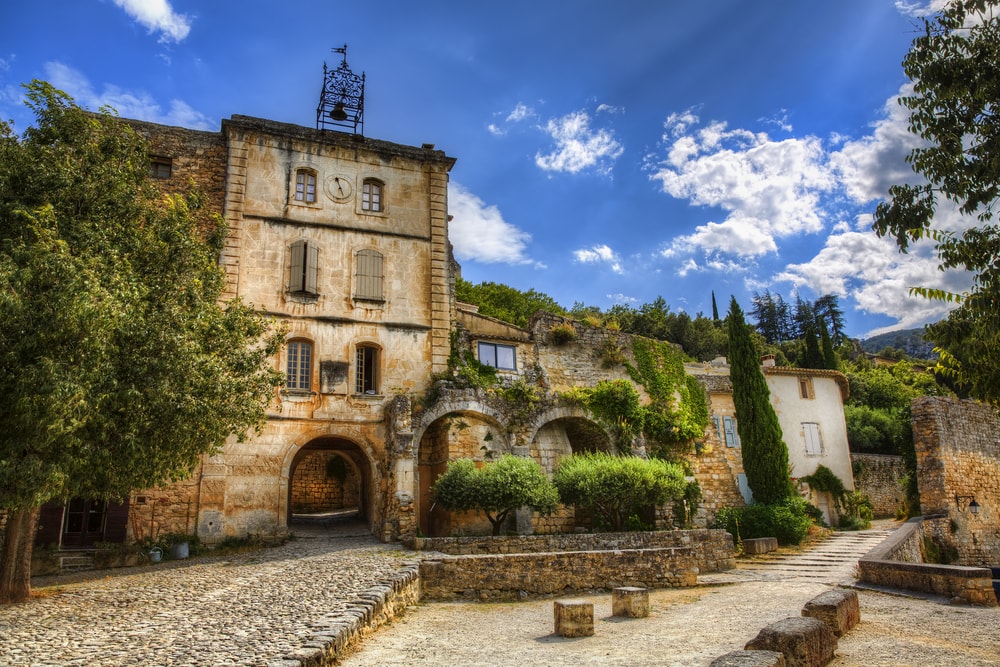 Beyond Saint Tropez’s very large worldwide reputation it’s hard to remember that it is just a small village with a couple of thousand permanent inhabitants. Places des Lices is just the place to remind you that above the super yachts parked round the corner and the fancy high-class hotels, this is the place where you’ll find the local bakers and people playing pétanques under the shade of the trees. 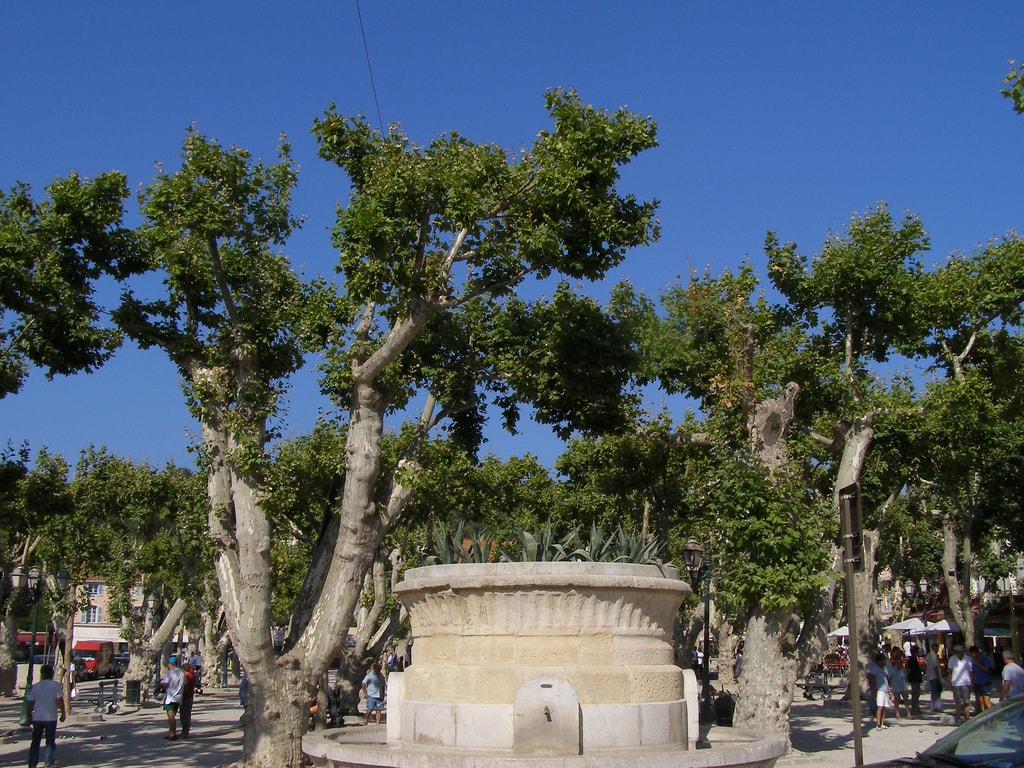 Moustiers-Sainte Marie is a village perched high up on the hillsides and a perfect stopping place for lunch or dinner during a visit round the Luberon or on the way to Europe’s answer to the Grand Canyon, the Gorge de Verdon. There’s an old convent high up on the mountain that you can trek up to (“la grotte Sainte-Madeleine”), or wander the cobbled streets around the Place Chevalier de Blacas. It’s a small place – it gets busy in summer – but a wonderful square to sit in and watch the world go by. 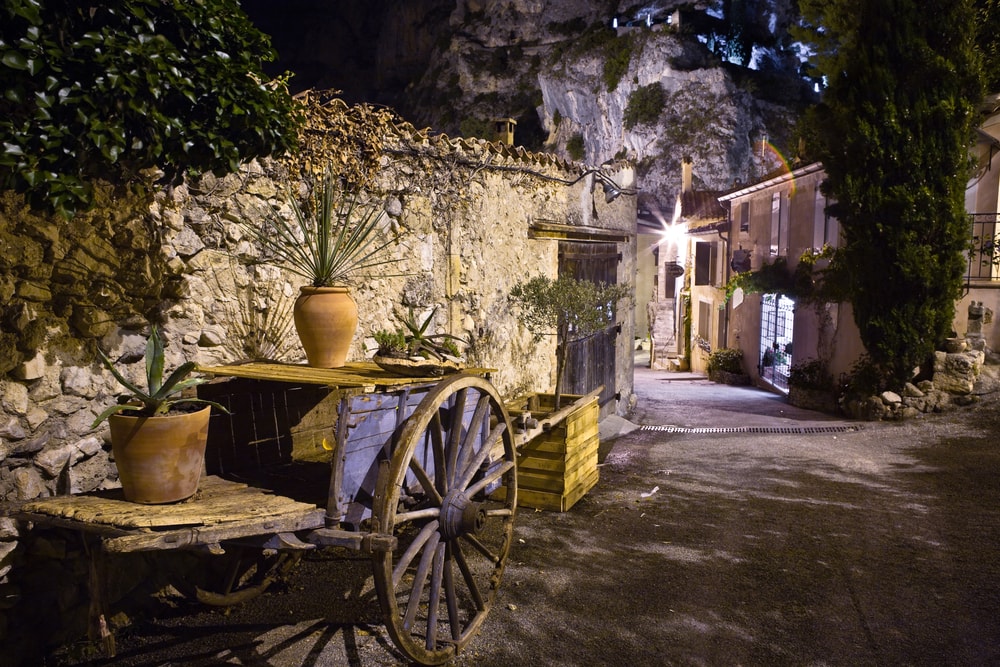