The McBaguette and France’s Love-Hate Relationship with McDonald's 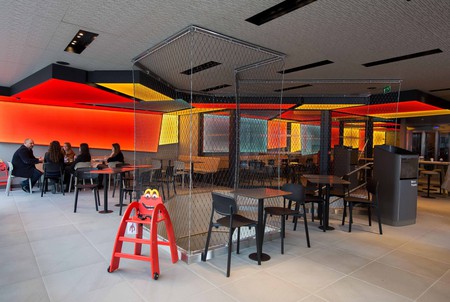 France is associated with haute cuisine and fine dining and has a rather complicated relationship with McDonald’s restaurants. In the southern French city of Marseille, however, a small war has been waging not to shut an outlet of the chain, but to keep it open.

On the one hand, the French love McDonald’s and France is one of the multinational’s biggest markets. At the same time, McDonald’s is perceived as a threat to the French culinary landscape, driving people away from traditional French cuisine and towards American-style burgers and chips. What’s more, as one of the most instantly recognisable global firms, McDonald’s is often an easy target for one of France’s national pastimes: protesting, whether it be against new food regulations or incoming labour laws. And it’s in the case of people’s jobs that McDonald’s has once again come into focus. In Marseille, McDonald’s workers are currently pitted against the franchise owners in a fierce battle over jobs and livelihoods. 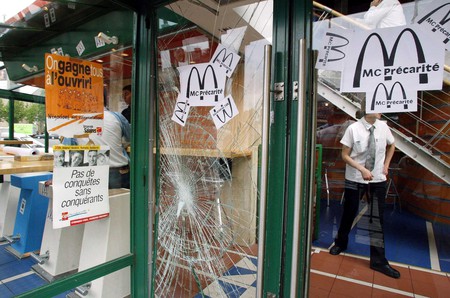 A protest by McDonald's staff in 2003 when they barricaded themselves inside, Paris | © Sipa Press / REX / Shutterstock

French locals often fight the arrival of a new McDonald’s…

There have been lots of instances of residents protesting against an incoming McDonald’s in France, whether to protect local restaurants or because they are fighting the consumerism that the company, for many, portrays. For both reasons, a mayor on the French island of Oléron near La Rochelle is locked in a legal battle to keep McDonald’s from obtaining planning permission (he has the support of 81,000 residents who have signed a petition) and a judge is due to rule in October 2018. Such stories have been common ever since the chain arrived in France in the 1970s to a sceptical public. The business world eagerly monitored its progress; no one was sure that the French could be persuaded to eat with their hands instead of with forks and knives. And no one was sure that the land of foie gras and heavenly cooking would embrace fast-food culture.

… but McDonald’s is much loved and after the US, France is its biggest market

The success of McDonald’s is often used as a case study in business courses around the world to show how a brand can turn many well-founded conventions on their head. Despite initial resistance, it has slowly become one of France’s most successful restaurant chains and outside of the United States, France is one of its largest markets – after the Americans and Japanese, the French eat the most McDonald’s per capita. In fact, when the branch on Paris’ favourite boulevard, Avenue des Champs-Élysées, was reopened in 2016 after a facelift, it was briefly the biggest McDonald’s in the world. And unlike the United States or Great Britain, the cost of a McDonald’s meal is not cheaper than many modestly priced restaurants; in France, it is often the same price as a brasserie or café meal. Recently, McDonald’s has come full circle in France as, along with wine, it is now introducing upscale branches where you can eat your meal with a fork and knife. 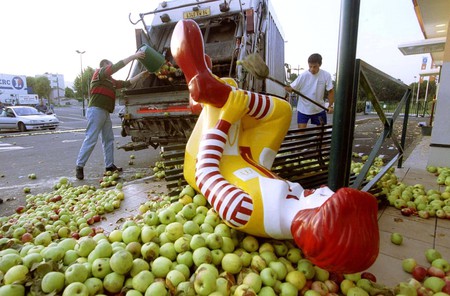 McDonald’s has often been an easy target for protesters…

Part of the chain’s success in France has been due to its positive response to negative criticism. Throughout the 1980s and 1990s, McDonald’s was criticised for the poor quality of its food and for importing cheap raw materials, like beef, from other countries instead of using French products. The protests against the multinational reached a head in August 1999 when sheep farmer José Bové famously bulldozed a McDonald’s that was under construction in Millau, in the southwest of France. He became a national hero trying to protect not just French goods, but French livelihoods and communities. McDonald’s was a scapegoat for these national campaigns and in response, it has spent the past 20 years convincing French people to eat in its restaurants – it now uses French beef, government-certified cheese and locally baked pastries and baguettes.

… and in Marseille, people are fighting to keep a McDonald’s open

In September 2018, in the suburb of Saint-Barthélémy in France’s second-largest city of Marseille, locals successfully staved off the closing of a McDonald’s restaurant, the largest employer in the area. Saint-Barthélémy is a notoriously deprived part of the city and its 77 workers took legal action against the franchise when it was going to be sold off to a Middle Eastern food operator. McDonald’s staff were terrified that they were going to lose their jobs – the area has a 30% unemployment rate (three times the national average). At the start of September 2018, the judge agreed with the McDonald’s workers that they were not given enough warning and has – at this time – defended their right to keep the restaurant open, although it is as yet unclear if it will continue as a McDonald’s. For the time being in Saint-Barthélémy, the McBaguette has been saved.