The 10 Best Things to Do in Marseille, France 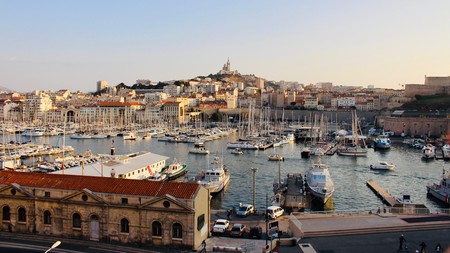 France’s second-largest city, Marseille is a multicultural mix that finds expression in vibrant cultural spaces, diverse food options and eclectic street art. With easy access to a national park and pristine beaches for swimming, Marseille has plenty to entice lovers of nature, while the Château d’If fortress and Roman-Byzantine basilica are sure to draw history enthusiasts.

Snap up some fresh produce at Marseille’s markets

Le Vieux Port (The Old Port) should form part of any trip to Marseille. To get the most from your visit, start early: aim to arrive at 8am, when the fishermen bring in the day’s catch to the fish market, laid out on the Quai des Belges. Arriving early gives you the best chance of seeing the most impressive catches, but the market runs until 1pm. Nearby Noailles market (also known as the Capucins Market) is an explosion of vibrant colours and aromas, with market stalls packed with fruits, spices and North African delicacies. Take the obligatory selfie under Sir Norman Foster’s majestic steel mirror, which provides some much needed shade on Marseille’s 300 sunny days each year. Then walk the harbour, eating ice cream or indulging in a crêpe, watching the boats come and go.

Discover the surrounding forts and islands

Local novelist Alexandre Dumas wrote The Count of Monte Cristo with Château d’If in mind. This fortress is where his hero, Edmond Dantès, is unfairly imprisoned and plans his revenge. In real life, enemies of the state were incarcerated here because the currents are too strong to risk escape. Boats leave every day from the Vieux Port, except Monday, for the twenty-minute ride to the château. For a longer day trip, continue on to the calm island nature reserve of Frioul, a further half hour. Frioul has lots of rocky bays to explore (take sturdy shoes), or have a leisurely port-side lunch in one of the laid-back restaurants.

The most famous building in Marseille, this basilica, completed in 1864, sits atop the city’s highest point. Known locally as “la bonne mère”, it is said that the monumental statue of the Virgin Mary on top of the bell-tower watches over the entire city, particularly the sailors. It’s a worthwhile (if a little strenuous) climb up the many steps to the top of the hill, but visitors can also opt to take the gentle train from Le Vieux Port. It’s hard to know what’s more photo-worthy – the Roman-Byzantine architecture or the panoramic views of the city and Mediterranean beyond.

Between Marseilles and the next town along the Côte d’Azur, Cassis, sits one of France’s most stunning national parks. “Calanques” comes from the local Occitan language, meaning “inlet”, which is what formed here amongst the limestone cliffs over millions of years. Cars are limited due to fire risk, but hiking and cycling are undoubtedly the best way to experience the park, stopping for lunch in one of the few restaurants in the bays or having a picnic after a swim. On the way back to Marseille, head to Les Goudes, an endearing little fishing enclave that locals call “the end of the world”.

Up-and-coming Cours Julien can feel a little rough around the edges, but it’s one of the liveliest places to be in Marseille when it comes to nightlife. Food options are plentiful thanks to the diverse restaurants – ranging from Somalian and Lebanese to Indian and Algerian – and the street food, which is a little lighter on the pocket. Grab a beer, sit on a stoop or at a bistro and take in the street art and independent craft shops, supporting local artists and fashion designers.

Imagine living in a Brutalist city within a city

At the end of World War II, Marseille faced a huge shortage in housing, health, education and transport services, and it was legendary French architect, Le Corbusier, who stepped forward to fill the gap. He created the “Cité Radieuse”, a city within a city: a self-contained residential unit with a school, a doctor’s surgery, a library, restaurants and a supermarket in one Brutalist architectural wonder. Today, the coloured concrete site is prime real estate (and still functions as a small village), and visitors can have a drink or bite to eat after admiring the rooftop paddling pool – with views to die for.

In the 19th century, with cholera causing deaths throughout Marseille, the city’s leaders came up with a bold plan to build over 85km (53mi) of aqueducts to transport fresh water from the nearby Durance River. The majestic Palace Longchamp was built to celebrate the achievement, and is now home to the Natural History Museum and Museum of Fine Arts. Lounge here at the weekends in the surrounding park, listening to one of the many summer concerts. There is also a faux zoo, with plaster glass elephants and tigers, to replace the real one which was shut down in the 1980s.

Dive into culture and retail therapy at the Old Docks

La Joliette, one of the oldest parts of the city, is currently one of the largest European regeneration areas, whose dockside buildings have had a facelift and now house independent arty shops and restaurants. Here, you’ll find Les Terrasses du Port, a state-of-the-art shopping mall whose rooftop is lined with restaurants and food trucks – a great spot to watch the cruise liners glide in and out across the glistening Mediterranean. A short walk away, visit the Musée des Civilisations de l’Europe et de la Mediterranée (known as MuCEM), to view an art exhibition or dance in the basement on club nights. For sheer architectural wow factor, traverse the walkway from MuCEM to Fort Saint-Jean, exploring the many tunnels and ancient hideaways.

Hit the beaches and watch the cliff-divers

Marseille has some wide open sandy beaches (Prado Beach, for instance), but some of the best beaches are tucked away along the Corniche Kennedy, named after the former US president. From the Vieux Port, pick up a bike from the “Vélo” bike-sharing scheme and head to Anse de la Fausse Monnaie, descend the cliff staircase and hunt for a spot to lay your towel across the rocks. You’ll have prime position to watch daredevils cliff-dive into the water, while there are plenty of smaller rocks for more cautious would-be cliff-divers. Waters are warm enough to swim from April through October. Take provisions, though, as shops are few and far between.

Running down the side of the tracks of Marseille’s largest train station, Saint Charles, is La Friche, an old tobacco factory turned arts and community regeneration project. It has something for everyone: a Monday night farmer’s market, playgrounds, a skate park, an organic restaurant, cultural events (on most warmer weekends) and a charming café-bookshop. The pièce de résistance, though, is the roof bar in the summer months, where DJs spin tunes against the Mediterranean sunset. Pro tip: since the surrounding area is residential, the music stops at 11pm, so get there from 7pm to have a full night.