The Best Places for Cycling in France 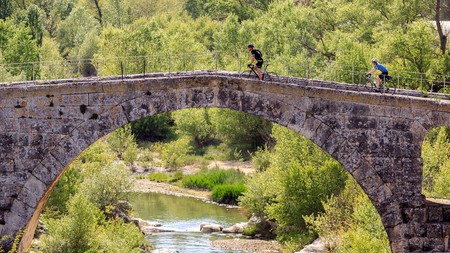 Explore France by bike and discover the most breathtaking views, from mountainous trails to coastal paths | © Hemis / Alamy Stock Photo

Lush vineyards, towering mountains and imposing castles make France every cyclist’s dream. The country is known for its scenic cycle routes which allow for leisurely as well as more dynamic trails more suited for a stage of the fearsome Tour de France. Here are the best bike rides against the backdrop of mind-blowing scenery to take in France.

There is probably no better way to explore the lavender fields of Provence or the steep slopes of the Pyrenees than on your two wheels. France takes pride in its diverse landscape, and the numerous cycling paths across the country guarantee to take you on a marvellous ride. Browse through our suggestions and cycle your way through the most fascinating places in France.

Côte d’Azur boasts a number of scenic cycling routes leading to pebbled beaches, belle époque villas and charming offshore islands. Nice, with its elegant coastline, terracotta-hued houses and Baroque churches, seems like the perfect place to start your cycling adventure along the riviera. The city is where the Tour de France kicked off in 2020 and it has been super-popular with cyclists for decades, thanks to its temperate climate and amazing landscapes. If you choose to move further inland beyond the coast, you’ll be greeted with quaint hilltop villages, vast vineyards and flower farms. Alternatively, opt for the coastline experience and head west to see Antibes and Cannes or east for the glamorous Monaco. Either way, you’ll be basking in some splendid vistas. 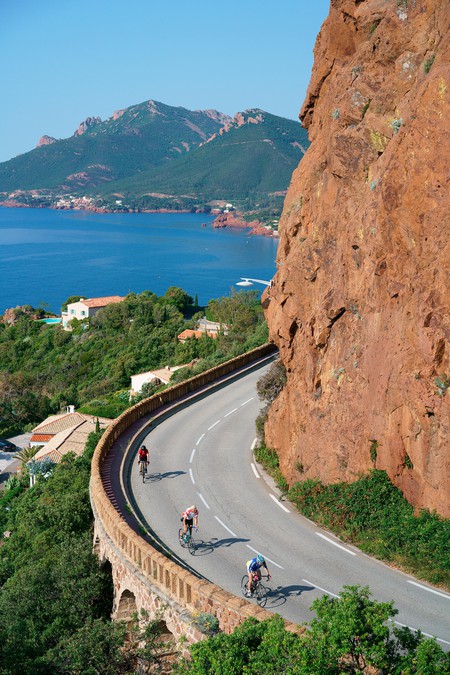 The Corniche D’Or links Saint-Raphaël to Cannes and sits between the Mediterranean and the Esterel Massif | © aerial-photos.com / Alamy Stock Photo

Another great option when it comes to cycling in the south of France is Provence. From the Southern Alps and the Camargue plains to the lush vegetation – think vineyards, olive groves, pine forests and lavender fields – Provence is a cycling paradise, especially if you’re looking to bike along quiet roads surrounded by greenery, or even deep gorges and grand chateaux. The area is famous for Mont Ventoux, a mountain attracting cyclists from all over the world, who venture the arduous climb to the top on their wheels. This is no easy task given the so-called “Beast of Provence” sits at 1,909m (6,263ft) high. Strong mistral winds blow at over 90kph (56mph) here, 240 days a year. If you do manage to go all the way up, you will be rewarded with unrivalled views of Provence and the Alps. 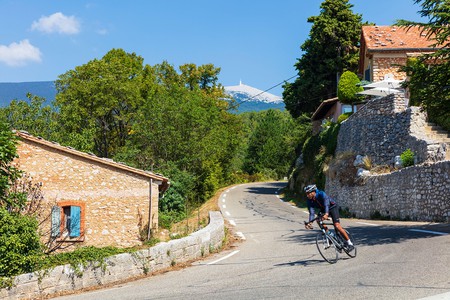 Few places in France are prettier than Normandy, with its cideries and half-timbered houses lining the cycle routes, or greenways, that run across the region. Normandy’s crown jewel is Mont-Saint-Michel, the Unesco-listed fortified island that hosted the Tour de France’s Grand Départ in 2016. There’s a 442km (275mi) bike path – the Véloscenic – that will take you from Paris to Mont-Saint-Michel passing through natural parks and pastoral villages, and Normandy alone has 500km (311mi) of dedicated bike paths. In Brittany, hundreds of kilometres of disused railway lines and canal paths have been turned into greenways, with the 365km (227mi) towpath between Nantes and Brest serving as a lovely bucolic cycle route. Expert cyclists will appreciate Brittany’s coastal cycle path, a challenging route marked by inlets and estuaries. 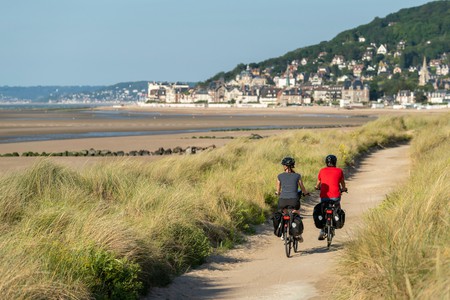 It was the Romans who established the first major settlements on the shores of the Loire river, with those later evolving into the towns we’ve come to know as historical treasures – such as Amboise, Orleans and Tours. The Loire Valley is now filled with vineyards, orchards, artichoke and asparagus fields, next to lavish chateaux, all of which make for an unforgettable cycle or train ride. Follow the Loire à Vélo trail which consists of 900km (559mi) of paths and roads that connect central France to the Atlantic Ocean, or try the 1,000km (621mi) path that begins from the Massif Central mountains and descends past extinct volcanoes, crater lakes and deep gorges before eventually joining the Loire à Vélo route. 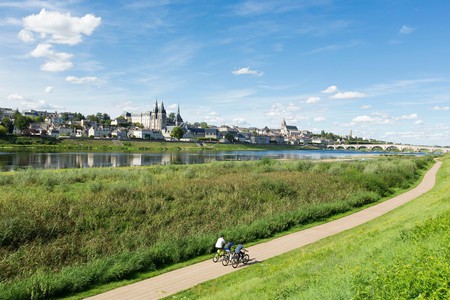 Seasoned cyclists seem to be especially fond of the French Alps, and it’s no wonder why. The region has hundreds of cols, each of them guaranteeing a thrilling climb, so it’s just a matter of choosing the ones that lead to the mountains you wish to climb, and then deciding where to base yourself. Among the ski resorts to keep in mind are Morzine and Annecy which cater for the north of the area, Bourg-Saint-Maurice for the centre and Bourg d’Oisans for the south. For example, if you’re looking to climb Alpe d’Huez, the most famous climb among cyclists, then it’d be best to be based at Bourg d’Oisans. This popular climb with its 21 bends has been regularly included in the Tour de France. 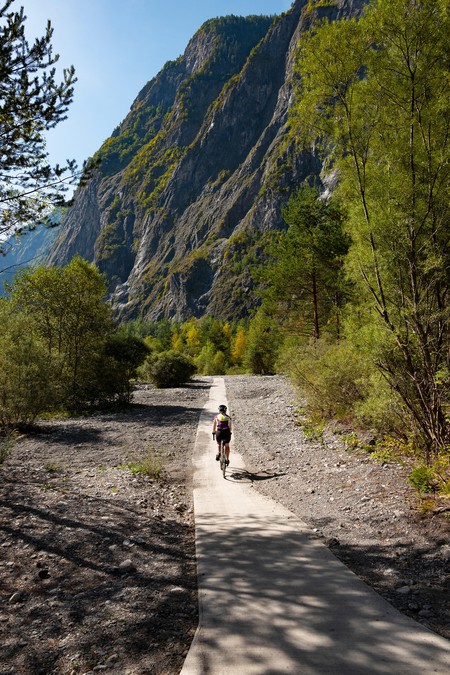 This 430km (267mi) mountain range straddles the French-Spanish border, offering plenty of cycling routes that pass through valleys, tarns and mountain pastures. Just like in the case of the Alps, you will need to pick a resort that has easy access to the mountain you wish you climb. There are two main resorts, Argelès-Gazost and Bagnères-de-Luchon, each serving several different cols, including the two sides of the Col du Tourmalet – the most climbed mountain pass in the Tour de France’s history and the highest paved one in the Pyrenees. Keep in mind that the slopes here are short but steep and that the Pyrenees are generally less developed than the Alps, with fewer cafes and restaurants along the way. 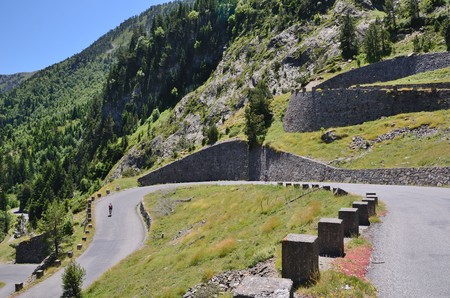 France brims with vineyards, and the best way to experience them is by following Alsace’s Vineyard Cycle Route – which runs alongside the Alsace Wine Route. Part of the EuroVelo 5 Via Romea route, this 131.5km (81.7mi) path begins in Strasbourg and takes you to the foothills of the Vosges mountains. Pedal your way through verdant hills and picturesque medieval or winegrowing villages – such as Colmar – and enjoy the serenity of the peaceful country lanes. Divided into five sections, the route is dotted with pretty castles, Gothic churches and, of course, a number of vineyards and orchards. Among the most attractive sights are the villages of Mittelbergheim and Riquewihr – the latter’s cobbled streets are lined with half-timbered winemakers’ shops and tasting rooms. 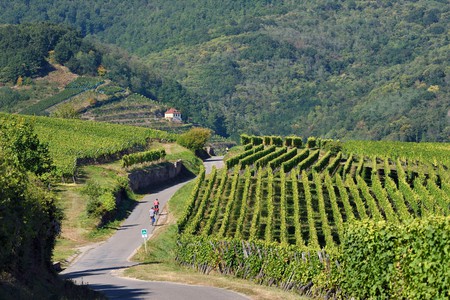 Burgundy’s most travelled cycle route is the 212km (132mi) Canal de Bourgogne – its most beautiful part lies at the southern end, where the canal shares the valley bottom with the river Ouche. Northwest of the canal, you will find plenty of chocolate-box and historic towns, including Chablis, famous for its dry white wine. And if you find yourself getting tired from all the water – if that’s even possible – you can always run for the hills, literally, following a shortcut through the Châteauneuf-en-Auxois hill town, which is home to a medieval castle complete with turrets, curtain walls and a grass-filled moat. For an exhilarating cycle, try the rugged terrain of the Morvan massif. The options here are endless. 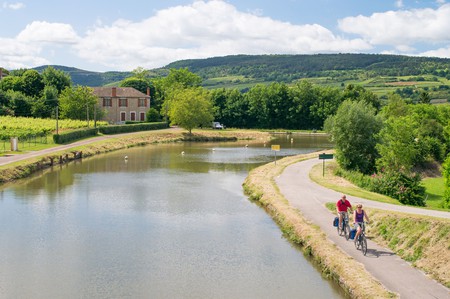 Going skiing instead? Discover our guide to the best luxury hotels in Courchevel, or the best hotels in Morzine, and book now on Culture Trip.