The Best Nightlife, Bars and Clubs in Lyon, According to Drinks Expert Alex Benguigui Though the city of Lyon is steeped in thousands of years of history, the nightlife scene in the city certainly has its finger on the pulse. Spend a night dancing to global DJs on the roof of a sugar factory, or slip into a clandestine bar for elaborate cocktails. Whatever your pace, here are the best spots to sip a night away in Lyon. 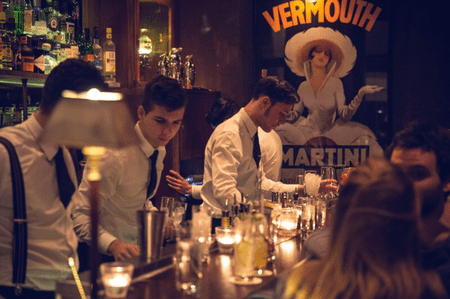 For an intimate, speakeasy-style bar, L’Antiquaire Bar is one of the best spots in Lyon for a drink or two | Courtesy of L’Antiquaire

There’s no such thing as a slow night in Lyon. There are plenty of traditional Lyonnais bars, serving up wine and apéritifs from the neighbouring Rhône Valley. You can find raucous bars on boats, and a rooftop concert hall where, during the annual Nuits Sonores festival, you’ll find famed DJs spinning tunes. There are Irish pubs and Latin dance halls, craft cocktail bars and beer taverns.

On any given night, you will find crowds of people sipping wine and cocktails on the cobblestoned streets, which is the best place to marvel at the city’s historic sites. The city illuminates historic buildings in waves of colour come dusk. The city is also scattered with sterling bars dedicated to serving up inventive cocktails, from ‘Penicillins’ to ‘Zombies’ and everything in between.

To help get acquainted with the top drinking destinations in the city, follow the lead of local wine and food expert Alex Benguigui, of Foodie Lyon, who runs food, wine, and culture tours through Lyon and the Rhône Valley. He weighs in on his favourite sips in the city.

For Benguigui, Plethore & Balthazar is the best place in the city for a glass of wine, from the scholarly sommeliers to the cosy atmosphere. “They have an impressive wine cellar visible from inside the bar, and they have one of the biggest wine menus I’ve ever seen, with wines and Champagnes from everywhere in France. Including really good ones like Condrieu or a simple Beaujolais.” Plus, Plethore & Balthazar is nestled near Rue Mercière – “one of the most famous streets for food,” Benguigui adds.

Situated in the heart of Lyon is F2 Café Comptoir, a gay-friendly bar where “they welcome you warmly, like you’re part of the family,” says Benguigui. “The boss, Fred, is always here to have a word with you and a hug.” Inside is a formal dining room, and outside, a terrace filled with Lyon’s residents that is buzzing with energy year-round. “They have plaid blankets, so you don’t catch a cold sitting outside during winter.” Benguigui recommends digging into the small food menu. “You definitely should try their communard, a typical Lyonnais apéritif with blackcurrant liqueur and red wine. Simple mais efficace!”

“Another wonderful place for drinks is Le Dôme in the Hotel Intercontinental,” says Benguigui. “Especially for the view over the huge cupola.” This isn’t an ordinary lobby bar, as the hotel took over an 800-year-old hospital in 2018, and reopened as a luxury hotel. The commanding structure, by architect Jacques-Germain Soufflot (also responsible for the Panthéon in Paris) was left untouched, so visitors can marvel at the detailed medieval stonework. Slip into a chair, order a cocktail, and admire the 32-metre-high (105-foot-high) domed and coffered roof.

Head to La Sucrière, a sprawling exhibition space housed in a former sugar factory, and climb up a winding flight of stairs to the rooftop. There, you’ll find Le Sucre, a bar and club that has become the beating heart of the city’s music scene. Every year, it is home to the Nuits Sonores electronic music festival (Jamie xx, Caribou and Mogwai have played in the past few years). Outside of the festival, the club plays host to some of the city’s coolest underground DJs. Come for the view, and stay late to dance under a web of fairy lights.

This historic bar pays homage to Venice’s St Mark’s Square through its richly decorated interiors, Venetian paintings and a menu that nods to famed Italians. Slip into the clandestine lounge for a cocktail or two to cap off your night. The sultry, dimly lit space serves up cocktails like the picasso sour, with pisco, acidulé, vanilla and amaro. It’s served with a blue and red liquid pen so you can draw your own painting in the froth of the drink.

If you’re looking for something more up-tempo, head to the banks of the Saône River. There, you’ll find the river barge where Sonic is based, a music venue-meets-club. Dark ‘80s music is the usual vibe, though local punk bands and noise DJs are known to play as well. Come early, as lines snake onto the shore, and be sure to head up to the rooftop terrace if you need a breath away from the crowds. It has spectacular views of the city from the water. 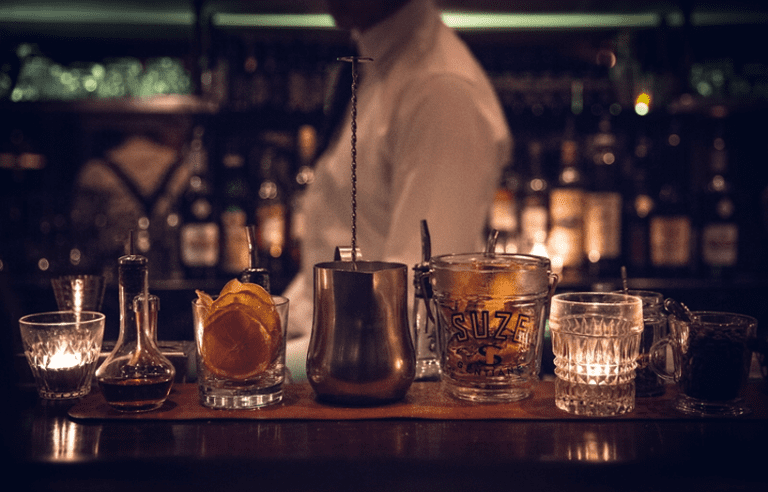 This elegant speakeasy-style bar sets the mood with old-school jazz and candle-lit rooms. Go for a nostalgic cocktail (such as the grasshopper, with crème de menthe, crème de cacao blanche and cream) or an original option (the cockpit thunderbolt, with spiced rum, vanilla rum, hazelnut syrup and cream). It is a few steps from the Saone River, tucked off a side street by the central city hall. It can be hard to spot in colder months, but in the summer, the patio opens up to passers-by.