The Best Coastal Towns and Cities in France 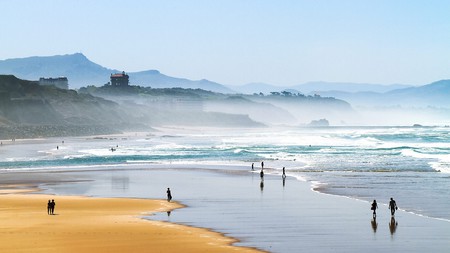 Biarritz is home to the wildest, most windswept beaches in France

With spectacular surf spots, turquoise waters and sandy shores, France has a fantastic and varied coastline. Culture Trip has picked the best cities and towns in France located just a short distance from the nation’s beaches, bays and coves.

France is spoilt for choice when it comes to beautiful cities and towns but it can be an added bonus when these are in close range of stunning seaside landscapes. Here’s a guide to some of the most culturally rich cities and towns with extraordinary stretches of coastline nearby. 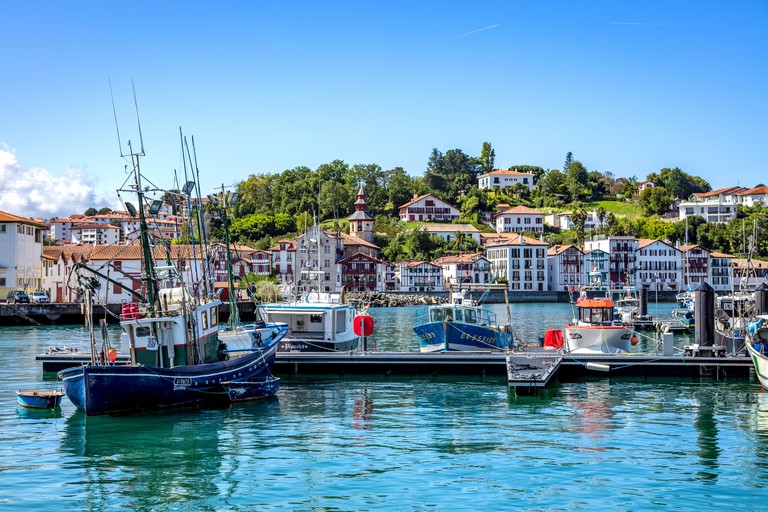 © AWP / Alamy
Saint-Jean-de-Luz is rare for a French Atlantic coastal town in that its beaches are protected from the fierce wind by three sea walls. The town has an interesting history – it ass here that the Sun King, Louis XIV, wed Maria Theresa of Spain in 1660. The beach is sandy and the white houses with red roofs that line its streets are postcard pretty. It’s also a great place to find a good bowl of freshly caught mussels and sheep’s milk ice cream, something of a local speciality. In addition, world-renowned surfing beaches in nearby Biarritz offer the chance to take some lessons. 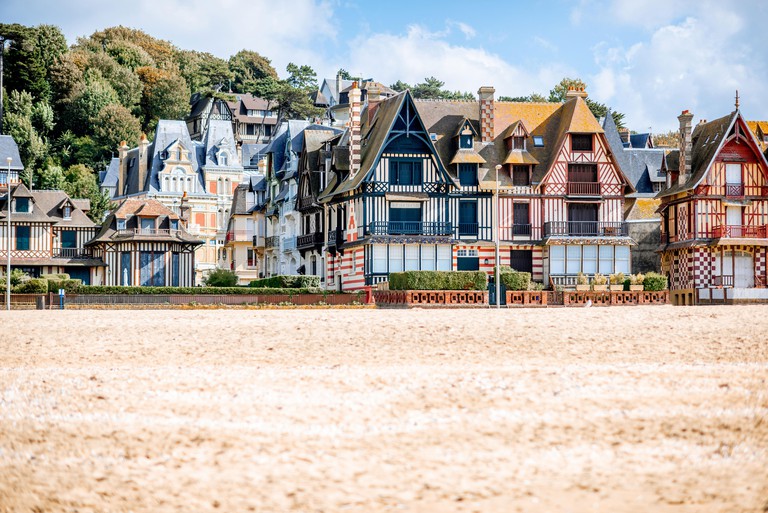 © RossHelen editorial / Alamy
Trouville-sur-Mer is less well known than its more visited neighbour, Deauville, but it’s a good coastal spot because of its 19th-century boardwalk and seaside shops. The sandy beach here is astonishingly large so it’s a great option if you want a little more space in the busy summer months. Old villas dotted among the hills provide stunning architecture and local attractions include the old fishermen’s area – which is still a working port – and the D-Day Landing sites. Trouville-sur-Mer is in the region of Calvados, not far from the city of Le Havre.

Architectural Landmark
Facebook
Email
Twitter
Pinterest
Copy link
Share
Map View
The thriving port of Sète sits on the Mediterranean coast of France. The main attraction here is the 13km (8mi) stretch of coastline to the west of the town, which divides the sea from a saltwater lake, the Étang de Thau. With its sprawl of sandy beaches, it’s likely that it won’t feel as busy here as other spots on the Mediterranean. The town has great fresh seafood restaurants and it is known for its water jousting (joutes nautiques), which dates back to medieval times.

Historical Landmark
Facebook
Email
Twitter
Pinterest
Copy link
Share
Map View
Honfleur is a stylish choice for people wanting a more traditional French vibe. It’s situated at the point where the river Seine (which runs through Paris) hits the English Channel and the old harbour dates back to the 16th century and is lined with townhouses from that period. The once-thriving port moved to its much larger neighbour Le Havre, so people now visit Honfleur for its history and to peruse the scenery adored by Monet – so much so that he painted the town on several occasions. Walk to the central 15th-century Saint Catherine’s Church, which was constructed by shipbuilders, or stroll around the coastal Botanical Gardens. The beaches nearby are great for catching crabs, which collect in the rock pools as the tide goes out.

Historical Landmark
Facebook
Email
Twitter
Pinterest
Copy link
Share
Map View
The island of Corsica in the Mediterranean is one of France’s 18 administrative regions and is widely regarded by the French as the best place in France to find beautiful beaches – the water is turquoise, the cliffs pink and the beaches sandy. Pigna is an old village built into the side of the mountain leading down to the sandy shores, where you’ll discover a much slower, more rustic way of life. Corsica has always been fiercely independent – it only became French in 1768 – and it firmly holds onto its family traditions and local customs, including delicious food such as civet de sanglier, a recipe made using wild boar. Pigna is not far from Bastia, one of the main Corsican ports where the ferries dock, although it’s still far enough from city life to feel like you’ve escaped the bustle for a while. 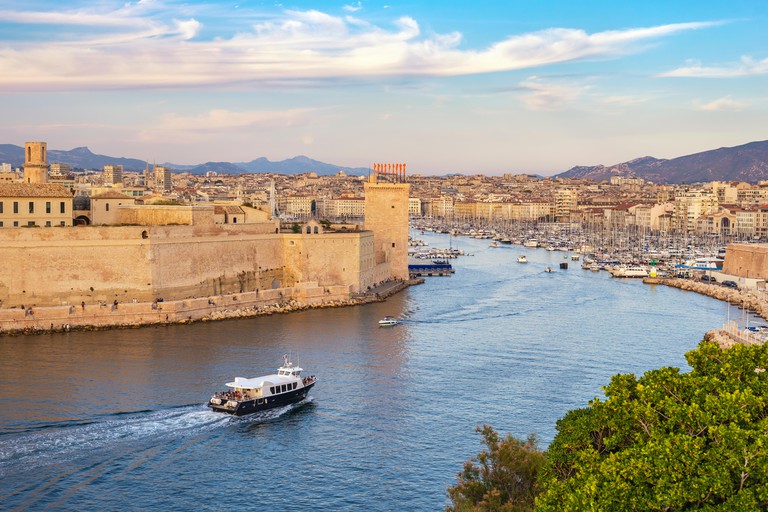 © Noppasin Wongchum / Alamy
Marseille is a more inexpensive choice than Cannes or Saint-Tropez if you’re looking to head to France’s Mediterranean coast. It is the country’s second-largest city by population and has a good mix of historic neighbourhoods. A walk around the old port yields a new flagship cultural museum, the Museum of European and Mediterranean Civilisations, as well as the historical Fort Saint-Jean. There are wide sandy beaches within walking distance from the historic port, mostly used by families with small children, with rocky outcrops offering superb diving possibilities along the shoreline. The nearby village of Les Goudes is the gateway to the coastal inlets called Les Calanques, which offer turquoise waters and perfect picnic spots with a view. 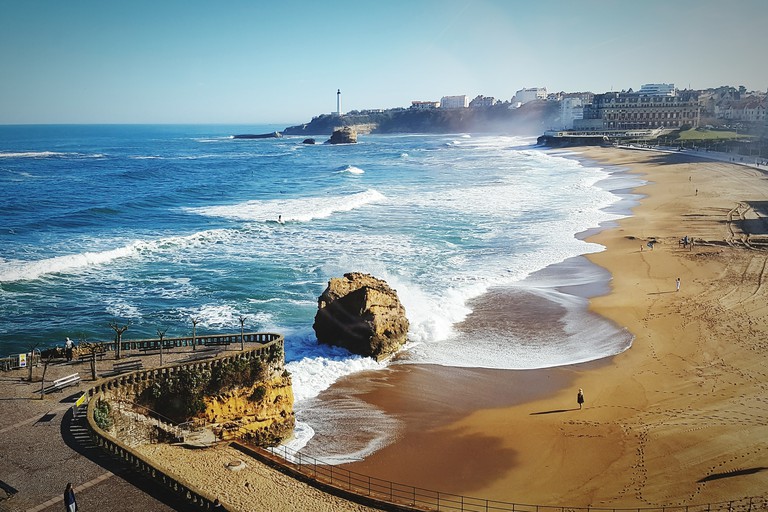 © Pascal Millot / EyeEm / Getty
Biarritz is a sophisticated town on the Atlantic coast in southwestern France. Emperor Napoleon III made the resort fashionable when he arrived in 1854 with his Spanish Empress Eugénie. Later, European royalty, from Queen Victoria of Great Britain to Alfonso XIII of Spain, took their holidays here, increasing the town’s popularity. Due to its closeness to the Spanish border, Biarritz’s cuisine is a wonderful hybrid of French and Spanish influences and its beaches are sandy and wide. With the wind off the Atlantic coast, it’s also a good spot for surfing, particularly during July when the annual surfing festival captivates the town. Walk the promenade, which runs between the two main beaches, stay in one of the many boutique hotels, attend one of its festivals or visit a centre for thalassotherapy, which uses seawater, mud and algae to cure all your aches and pains.

Historical Landmark
Facebook
Email
Twitter
Pinterest
Copy link
Share
Map View
Ault is often bypassed on tourist itineraries as, although it is very close to the ports of Dieppe and Calais, many people arrive by boat and drive straight out. Part of Ault’s charm is that it is not thronging with sophisticated restaurants or boutique hotels. Instead, it has picturesque white cliffs, pebbly beaches and a slow way of life dominated by locals and traditional restaurants and bars, rather than tourists. One of the best places to start in this small town of 1,500 people is La Flibustière. The owner has converted the front room and terrace of his house into a bar that looks out over the beautiful beaches under the cliffs below and he has a few rooms available in the form of a bed and breakfast, which is perfect for a short beach getaway with amazing scenery.

Historical Landmark
Facebook
Email
Twitter
Pinterest
Copy link
Share
Map View
Martigues is known for the canals that meander through its streets, linking the nearby lake, Étang de Berre, with the sea. Martigues began as a Roman encampment but the present-day town was founded in the 12th century by a local Provençal count and is now primarily a fishing port. It has a number of churches ranging from the 14th to the 17th century, including the Annunciade Chapel. A short drive away is the area called La Couronne, where there are sandy beaches often considered to be the best in the area, such as the Plage de Sainte-Croix. This beach is well served by local amenities (there are restaurants in several of the surrounding campsites, which will happily serve non-residents) and a shop that sells everything from ice cream and beer to sandwiches. 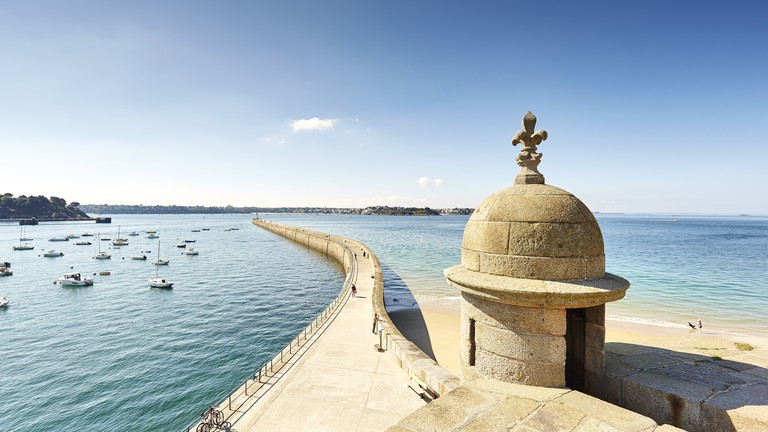 Courtesy of Brittany Tourism
Saint-Malo is a beautiful coastal city packed with cultural heritage. It is a citadel city that was founded by Celtic tribes and fortified by Romans. Later, in the sixth century, monks established a large monastery here. It was these monks who named the large rocky headland after the Celtic bishop Maclou (or MacLow) from whom Saint-Malo gets its name. The same headland protected locals against Viking invasions much later and in the 12th century, fortifications were built which still surround the city today. The large fortress is surrounded by beaches, providing wide sandy shorelines with a superb saltwater swimming pool, which fills up at high tide. At low tide, kids crowd around the rock pools with nets to catch crabs. 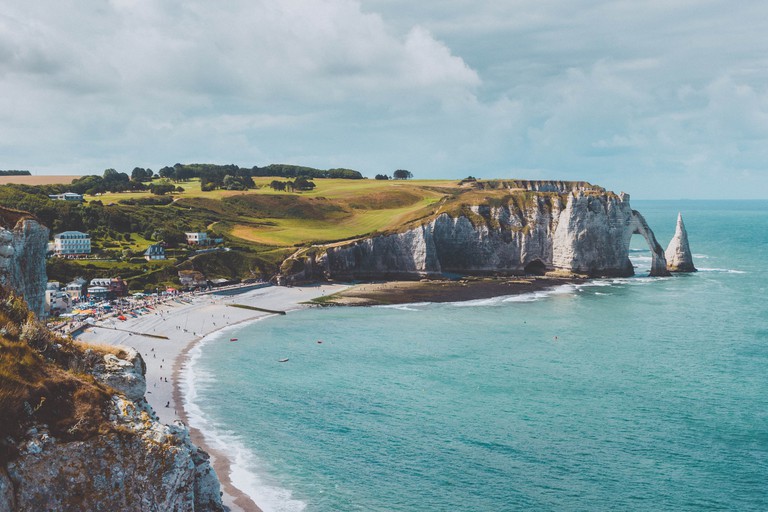 Étretat | © Ilnur Kalimullin / Unsplash
Étretat is famous for its limestone cliffs; a stunning place to visit for a beach picnic. The cliffs run along 4km (3mi) of coastline, but it is here, at Étretat, that the water and weather have eroded three “doors” into the cliff face. They are similar to Durdle Door near Bournemouth on the English Coast directly north, but much more impressive in scale. The town has built a thriving tourism industry on its geological heritage, so the town has all the necessary conveniences, but it’s really the beach days that people come for.
Give us feedback