The 15 Most Beautiful Medieval Castles in the World

Mont Saint Michel | © Diliff/WikiCommons
The castle is one of the most iconic features of European folklore. We imagine princesses, knights, horses, moats, and even the occasional dragon in our fantastical renditions of these places. Yet, few can pinpoint exactly which castles inspired these pervasive tales. Some feel they’re mostly the product of fiction. While there’s no doubt some tales have been embellished, we beg to differ. Here are 15 of the world’s most beautiful medieval castles, which have undoubtedly influenced our cultural conceptions of the Middle Ages.

Pierrefonds Castle is located in Picardy a region in northern France between Paris and Belgium. The castle was built in the 12th century, and in 1392 King Charles VI hired architects to remodel it for his brother Louis, Duke of Orléans. Much of the castle was eventually destroyed under the Part of Malcontents during the early 17th century, but Napoleon revived the marvelous structure as ‘a romantic ruin‘ during his 19th century reign.

The castle has been depicted in multiple films and television shows including The Messenger: The Story of Joan of Arc, and most recently Disney Channel’s The Wizards of Waverly Place. 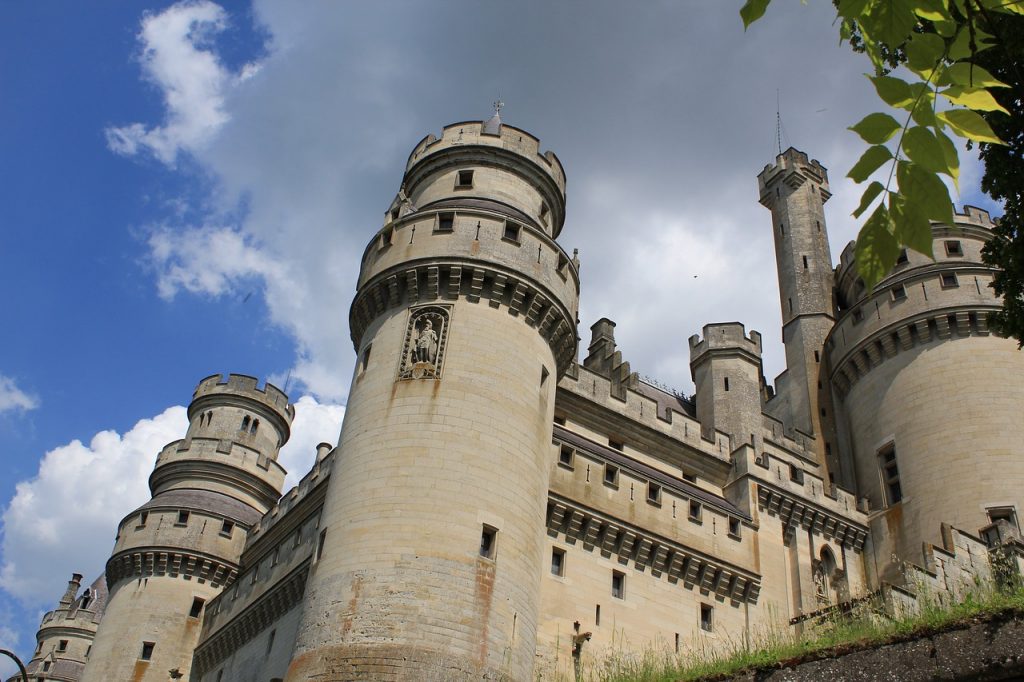 Museum
Loches Castle, Loire Valley, France | © travellight/Shutterstock
Situated in Loire Valley, Loches Castle was built in the 12th century. The castle is perched 500 meters above the Indre River, and its most striking feature is its enormous square shaped tower. Today the castle is a museum, which contains one of the best collections of medieval armor in France. King Charles VII gifted the castle to his mistress Agnès Sorel, and then the king’s son converted it into a state prison.

In 1702, the French aristocrat and writer, Henriette-Julie de Murat, took exile here after she was accused of ‘shocking practices’ — most notably, lesbianism. The castle was even used as a prison during the American Revolution where the French kept English captives.
More Info
Open In Google Maps
7 Mail du Donjon, Loches, Centre-Val de Loire, 37600, France
+33247590132
View menu
Visit website
Visit Facebook page
Send an Email
Give us feedback

Monastery
Mont Saint Michel is located on an island commune in Normandy. The castle was built on an island for strategic regions (the surrounding water made it more resistant to attack) and this spot had been used for the same purposes dating back to ancient times. For extra reinforcement there are also massive walls surrounding the castle interior.

In the 9th century, the castle was the home of Saint Michel’s monastery. It survived the 100 Years War without being destroyed, and today it is a UNESCO World Heritage Site. One of the castle’s most notable features is the tall turquoise spire with a small golden statue of Saint Michel at the top.
Looks like it's closed Hours or services may be impacted due to Covid-19
More Info
Open In Google Maps
Mont Saint-Michel, Normandy, 50170, France
+33233601430
View menu
Visit website
Visit Facebook page
Send an Email
Give us feedback

Undoubtedly one of the better known castles of the medieval era, Windsor Castle was built in 11th century and hold the record for the longest occupied castle in Europe. The interior is designed in 19th century Georgian style, and the well-preserved castle complex is utterly massive.

Nowadays, the castle is one of England’s most popular tourist attractions. Despite its role in tourism, Windsor Castle still functions as a home where Queen Elizabeth II spends her weekends. The palace is subject to major renovation projects in recent times as well. In 2011, for instance, two water turbines were installed on the Thames to provide hydroelectric power to the estate. 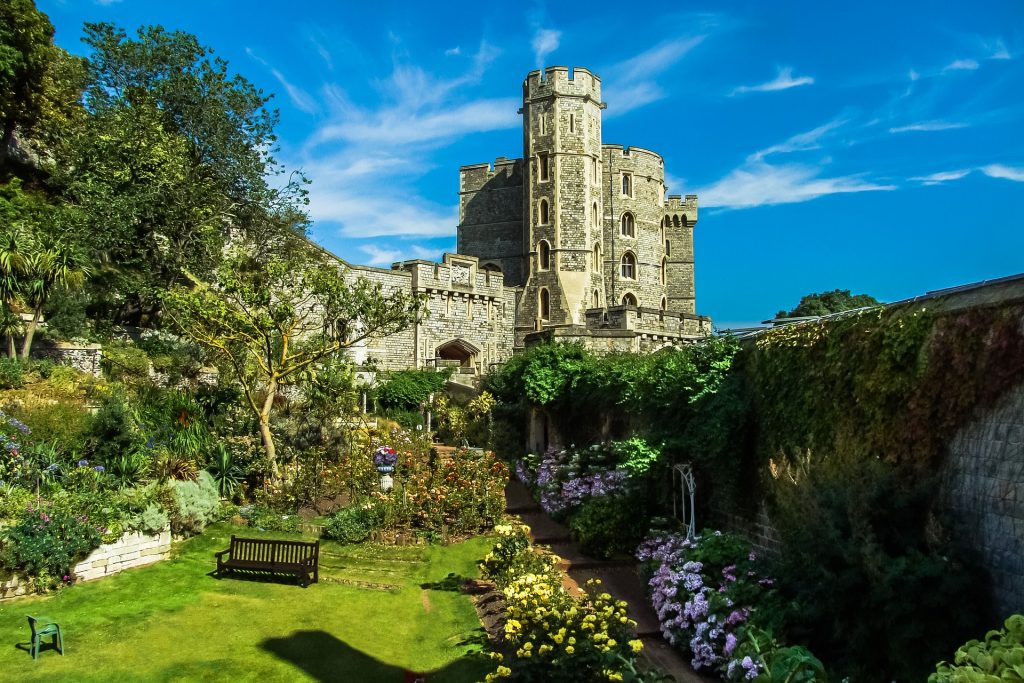 Museum
Bodiam Castle is perhaps one of the most iconic castles on our list due to its circular towers, ramparts, moat, and gatehouse. The castle’s construction also featured a complex landscaping plan solely for the purpose of boosting its aesthetic appeal.

Due to its idyllic look, historians argue about whether it was intended solely as a living estate for nobility or if it was actually built with the intent to be used in battle. King Richard II gave Sir Edward Dalyngrigge permission to build the castle after many years of military service. Today, the castle stands as a museum complete with a tearoom and host to an array of different family-friendly events.
Looks like it's closed Hours or services may be impacted due to Covid-19
More Info
Open In Google Maps
Bodiam, Robertsbridge, England, TN32 5UA, United Kingdom
+441580830196
View menu
Visit website
Visit Facebook page
Send an Email
Give us feedback

Arundel Castle was built in 1068, making it almost 1,000 years old! Robert Montgomery, Earl of Arundel constructed the castle, and for more than 850 years, the Dukes of Norfolk and their families occupied it.

Inevitably the castle was ravaged during England’s Civil War of the 17th century. Nearly 100 years later, the Arundel Castle was restored and the famed Queen Victoria and Prince Albert stayed here in 1846, drawing more attention to it.

The castle was subsequently restored and turned into the lavish home it is today. These renovations included the incorporation of a central heating system, electricity and elevators, making it one of the first country homes in England to possess these features. 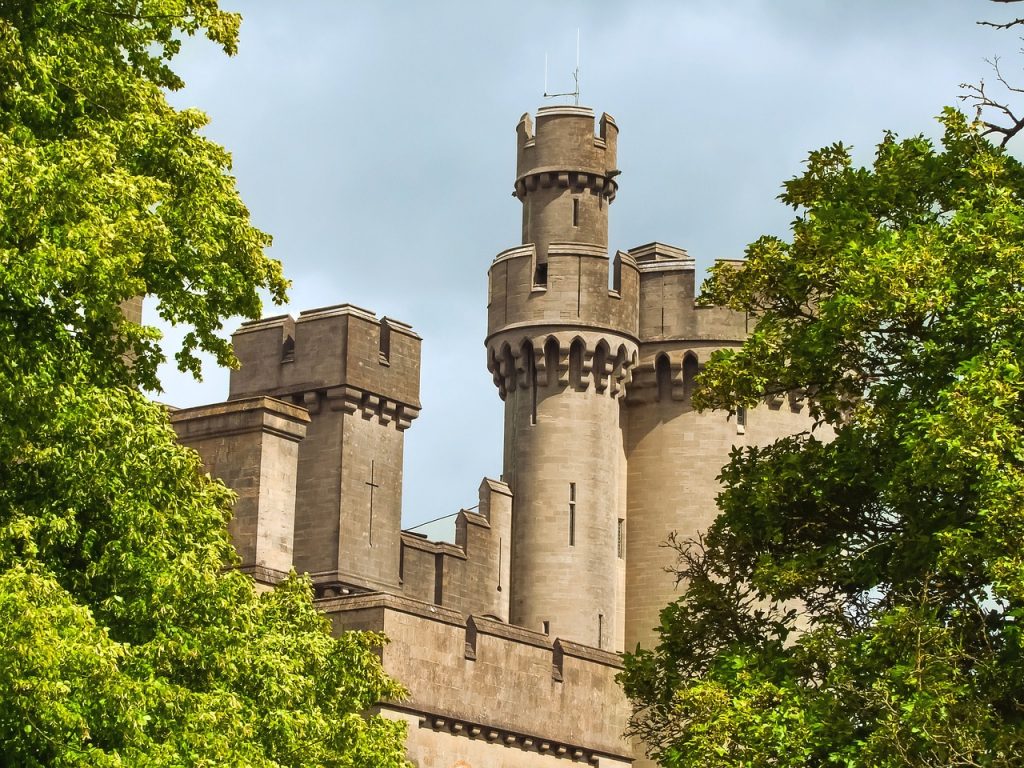 Park, Historical Landmark
Hever Castle, England | © aljonushka/Pixabay
Hever Castle is located in Kent, about 30 miles south of London. Today the castle is largely known for its lovely gardens. There is a winding yew maze, topiary, and pristine lake on the property as well. Further, it was the childhood home of the famed Anne Boleyn. Her husband, Henry VIII, gave Hever Castle to his fourth wife, Anne of Cleves after they divorced.

The castle also has an impressive collection of Tudor portraits including a rare image of King Henry VIII as a young man. Today, there is a 5-star bed and breakfast on the premises. It is even possible to host a wedding ceremony here.
More Info
Open In Google Maps
Hever Castle Hever, Edenbridge, England, TN8 7NG, United Kingdom
View menu
Visit website
Visit Facebook page
Send an Email
Give us feedback

Built during the Edo period of Japan’s feudal era, Nagoya Castle’s origins date back to the 1520s. The structure that we see today was completed in 1612 at the commission of Ieyasu Tokugawa. Soon after it was built, a warlord usurped control of the original castle and named it Nagoya Castle.

The castle was used in Japan’s WWII military operations as a strategic headquarters as well as a POW camp. Nagoya Castle incurred significant damage during this time, arguably the most wartime degradation of its long history. Today, the stunning white and green castle has been restored to its original beauty. 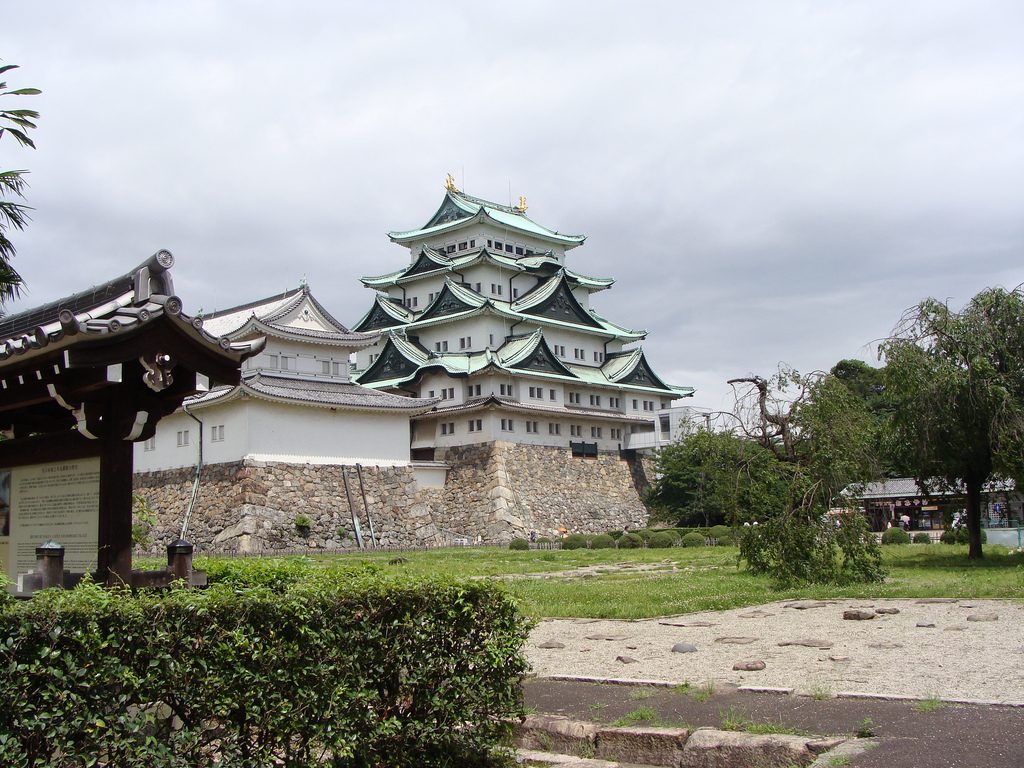 Hirosaki Castle is located in northern Japan by the Tsugaru Clan. Also built during the Edo Period, Hirosaki Castle featured a number of different fortifications including moats, turrets and gates. In 1627, only about a decade and a half after its construction was finished, a lightning bolt struck the five-story keep, causing it to burn down. The structure was rebuilt nearly two hundred years later into what we see today.

The castle ranks among only a handful of others like it. The castle complex is also known for its flourishing 2,600 cherry blossom trees, which bring visitors here each spring. 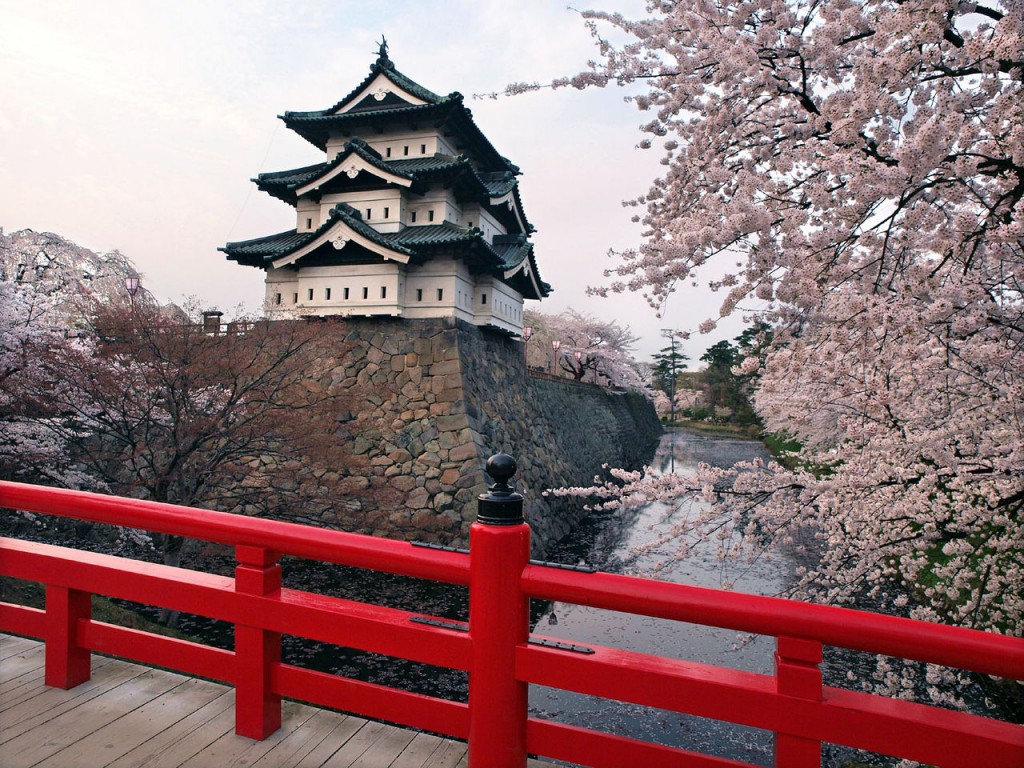 Bojnice Castle, SlovakiaWhat started as a simple wooden stronghold has become one of the most exquisite castles in Slovakia. Initially built in the 12th century, Bojnice Castle was updated and adapted to fit the tastes of its many successive inhabitants, most notably Count János Ferenc Pálffy.

The Count largely drew inspiration from the French castles in the Loire Valley. He filled the interior with vast collections of art, antiques, and tapestries. Now, the castle has both Gothic and Renaissance features that give it a fairytale appearance. Today, Bojnice is a museum and the sight of many different cultural festivals. 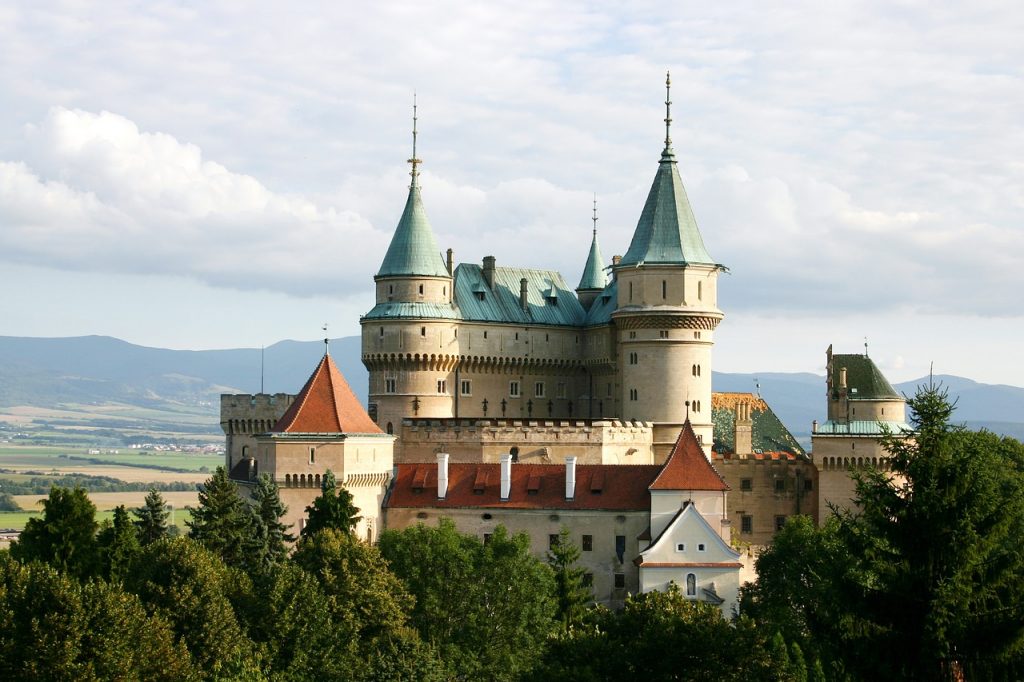 Ruins, Museum
Castle of Coca is located in central Spain. It was built in the 15th century under the jurisdiction of the royal Castile house who had a penchant for the luxurious. Indeed, this ornate castle served primarily as a place of residence rather than one of martial significance.

Because the surrounding areas lacked the resources, the castle was built with bricks rather than stone. This fact largely accounts for the castle’s reddish appearance. The castle structure itself is astounding in its enormity and delicacy. Oddly enough, Castle of Coca currently serves as a school of forestry. The grounds are still accessible to visitors as well.
Looks like it's closed Hours or services may be impacted due to Covid-19
More Info
Open In Google Maps
Coca, Castilla y León, 40480, Spain
+34617573554
View menu
Visit website
Visit Facebook page
Send an Email
Give us feedback

Art Gallery
Ksiaz Castle, Poland | © DariuszSankowski/Pixabay
Ksiaz Castle is one of the largest castles in Poland. Completed in 1292, this majestic structure is known for its pink and blue pastel color scheme. There is also an elaborate set of tunnels spanning beneath the castle. It served the Bohemian royalty for the first few hundred years of its existence.

During WWII, the Nazis seized it from the Hochberg family who owned it at the time. It is rumored that Adolf Hitler himself planned to live here. After the war, the Red Army destroyed all artifacts inside. The beautifully intricate castle has been restored to its former glory and today houses three hotels, two restaurants, and an art gallery.
More Info
Open In Google Maps
1 Piastów Śląskich, Wałbrzych, Dolnośląskie, 58-306, Poland
+48746643834
View menu
Visit website
Visit Facebook page
Send an Email
Give us feedback

Building, Museum, Archaeological site, Historical Landmark
Bran Castle | © Florin73m/WikiCommons
Bran Castle was built in 1388. It is located at the border between Wallachia and Transylvania, and is commonly nicknamed Dracula’s Castle due to its connection with the Dracula legend. At the very least, we can safely say that Bram Stoker’s novel, Dracula, took inspiration from Bran Castle as Count Dracula’s home in the story closely fits the castle’s description.

Today the castle is a museum filled with art and furniture collected by Queen Marie of Romania who ruled during the 1920s and 30s. There is also an open-air museum at the base of the castle depicting the lives of the Romanian peasantry.
More Info
Open In Google Maps
24 Strada General Traian Moșoiu, Bran, Județul Brașov, 507025, Romania
+40268237700
View menu
Visit website
Visit Facebook page
Send an Email
Give us feedback

Building, Ruins
Eilean Donan Castle | © Barni1/Pixabay
Eilean Donan Castle is located on a small island in Scotland where three lochs meet. It was built in the 13th century to protect the area from the Vikings. Unlike the castles on our list that were designed primarily for aesthetic purposes, Eilean Donan Castle saw its fair share of battles. In fact, it has changed sizes and fortifications many times throughout its history as an important military structure.

The castle was used well into the 18th century. The English bombarded the castle in 1719, and for nearly 200 years it remained in ruins. Lt. Colonel John Macrae-Gilstrap bought the island where the castle stands and dedicated the following two decades to its restoration. Today, the castle is accessible to the public.
More Info
Open In Google Maps
Kyle of Lochalsh, IV40 8DX, United Kingdom
+441599555202
View menu
Visit website
Visit Facebook page
Send an Email
Give us feedback

Perched high above the city of Edinburgh, this massive fortress is pretty hard to miss. Castle Rock, where Edinburgh Castle is situated, has been occupied at least since the 2nd century, and historians believe the castle itself has stood there in some form since the 12th. Today, the castle is said to be one of the most haunted places in Scotland. Long ago, a piper mysteriously vanished in the tunnels, and now his spirit is said to reside there. Paranormal activity or not, this castle remains the most popular tourist attraction in the country. It is open to tourists as a museum and educational center. 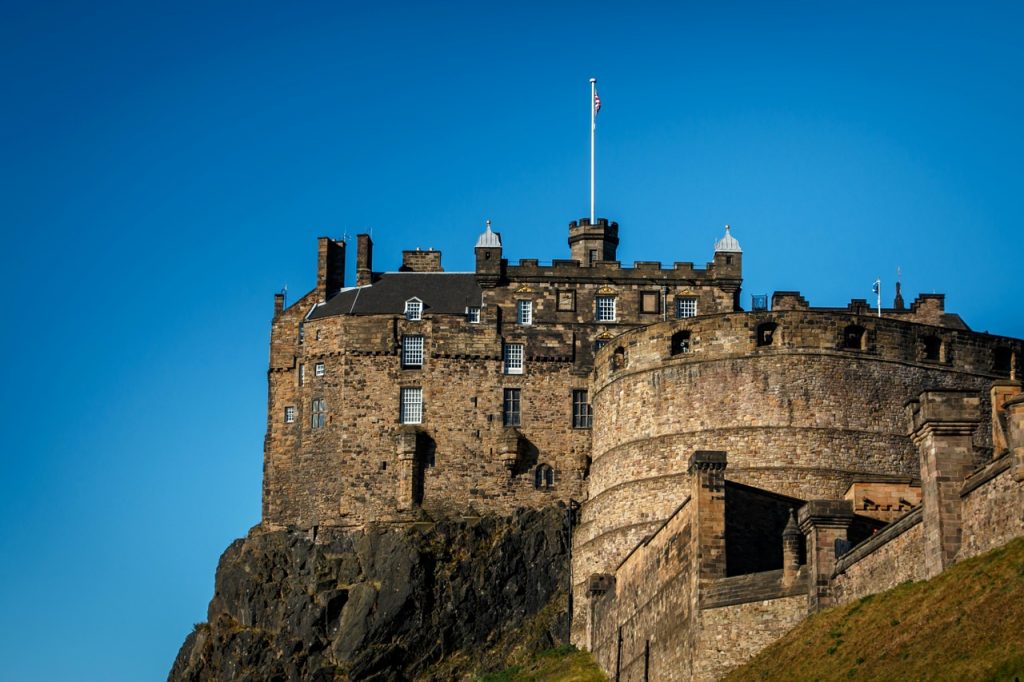