A French Fairytale: The 12 Most Charming Villages in France 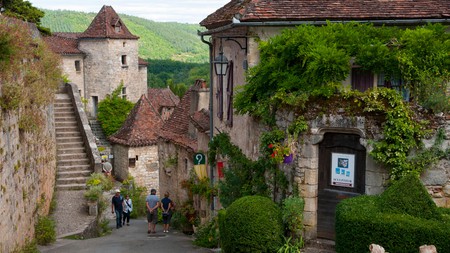 From medieval walled towns and religious heritage sites to picturesque seaside communities and majestic mountain towns, France is home to a mélange of villages each with their own distinct character. 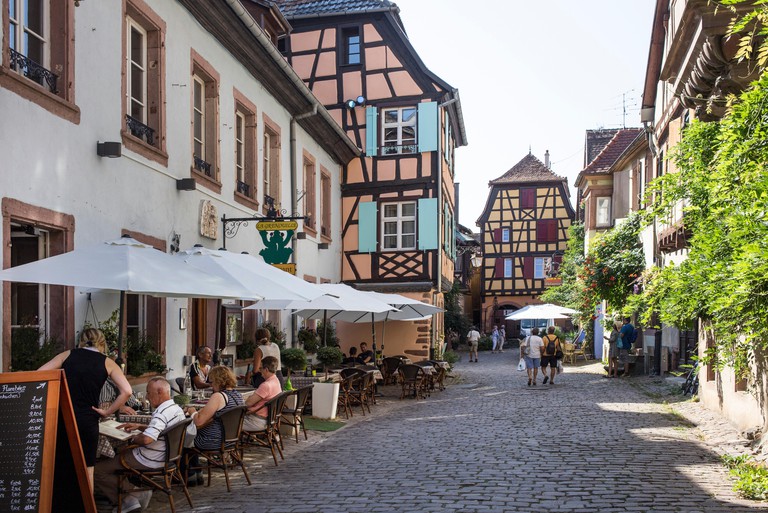 The village of Riquewihr, in the Alsace wine region of France | © Park Dale / Alamy Stock Photo
Nestled in the foothills of the Vosges Mountains in the heart of Alsace’s vineyards, Riquewihr sprang up between the 13th and 16th centuries and luckily, the fairy tale town looks much like it did 400 years ago. Quaint cobbled streets and gaily painted half-timbered houses have earned Riquewihr the nickname ‘Gem of the Alsace Vineyards’ and the town’s historic wine trade still thrives today. Dedicated oenophiles flock to the town to sample its many wine offerings, such as Riquewihr’s world-famous Riesling.
Open In Google Maps
Give us feedback 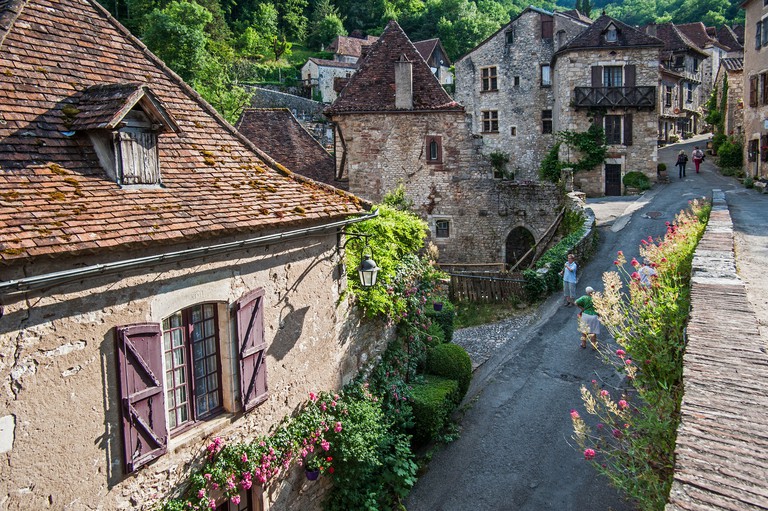 Tourists walking through the medieval village Saint-Cirq-Lapopie, Lot, Midi-Pyrenees | © Arterra Picture Library / Alamy Stock Photo
Perched high on a clifftop overlooking the meandering River Lot, the medieval village of Saint-Cirq-Lapopie is not only a member of Les Plus Beaux Villages de France but steeped in history, and home to 13 listed buildings. With narrow, winding streets leading down from the ruins of Saint-Cirq-Lapopie’s 13th century fort revealing beautiful medieval half-timbered houses it’s easy to see why the pretty village has been a haven for creative folk – neo-Impressionist paint Henri Martin and surrealist writer and poet André Breton among them – for many years.
Open In Google Maps
Saint-Cirq-Lapopie, France
Give us feedback 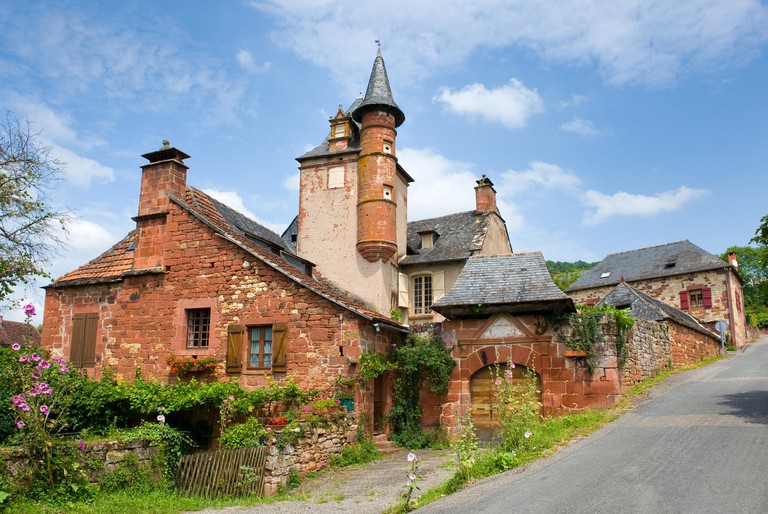 Collonges La Rouge | © Robert Hoetink / Alamy Stock Photo
What makes Collonges-La-Rouge stand out from France’s many picture-perfect villages is its unique architecture – almost all of its houses are built from local red sandstone and in summertime months, the red-toned village makes for a striking sight against the luscious green fields of southern Limousin. The focal point of the village is the Romanesque-style Church of St Pierre dating back to the 11th century though simply walking the pretty hamlet’s streets and taking in its fairy tale-like turreted homes is a joy itself.
Open In Google Maps
Give us feedback 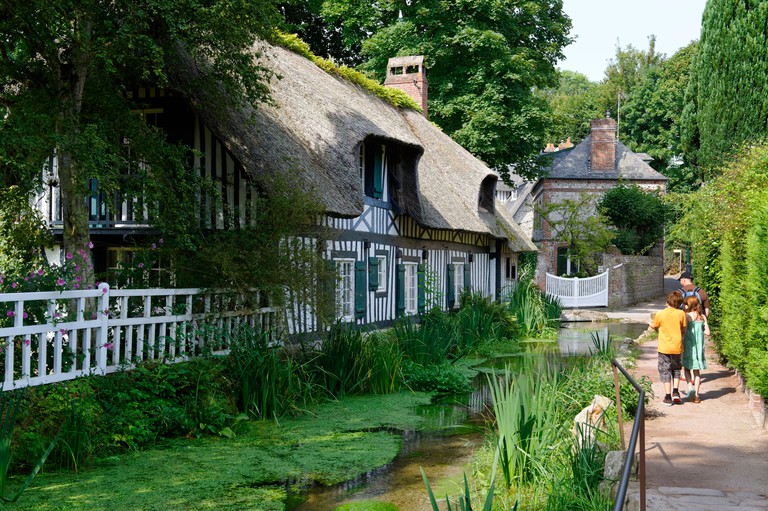 Abreuvoir on Veules River, France's shortest river, Veules-les-Roses | © imageBROKER / Alamy Stock Photo
Thought to be one of the oldest villages in the Pays de Caux, the seaside hamlet of Veules-les-Roses has been inhabited since the 4th century and is highly regarded as one of Normandy’s prettiest spots. The charming village is nestled on the banks of the River Veules – France’s smallest river – which winds its way past historic thatched cottages and watermills down to the shore where the village’s famous Veulaise oysters are harvested and a pretty little beach sits flanked by dramatic cliffs.
Open In Google Maps
Give us feedback 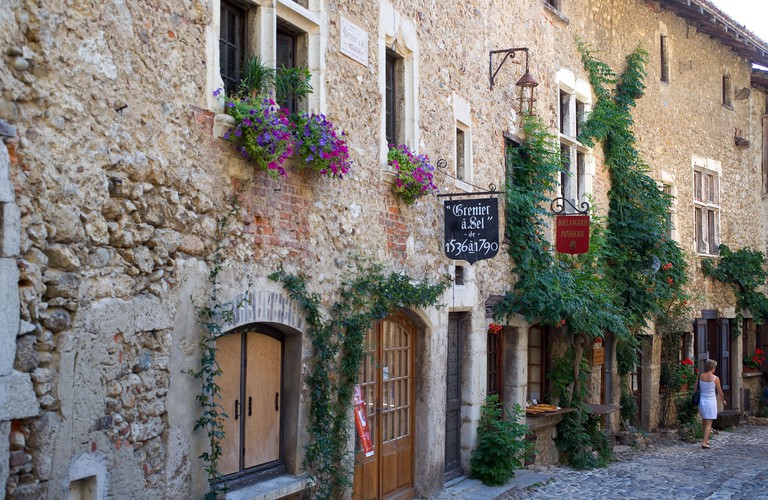 Perouges, medieval city in Rhone Valley | © STOCKFOLIO® / Alamy Stock Photo
Located a few miles northeast of Lyon in the heart of the Rhône-Alpes region, the beautiful walled town of Pérouges rose to prominence in the late medieval period when its weaving and wine-making industry thrived. Thankfully, it is largely untouched by modernism, with its cobbled streets and 15th and 16th century homes harking back to its medieval glory days – a town so beautifully preserved it’s been the setting for many period set films including The Three Musketeers and Monsieur Vincent.
Open In Google Maps
Give us feedback 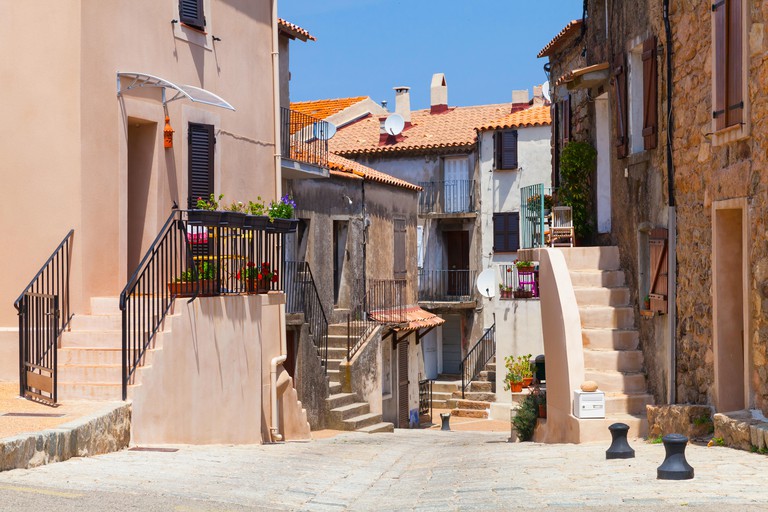 Narrow street of Piana town, Corsica island | © Eugene Sergeev / Alamy Stock Photo
Perched on clifftops high above the beautiful blue expanse of the Gulf of Porto, Piana is coastal Corsican gem. L’église de Sainte Marie, a Baroque-style church built in the late 18th century, dominates the pretty village and is home to beautiful paintings by Corsican artist Paul-Mathieu Novellini but one of the main attractions of this beautiful stretch of coast is Calanques de Piana – the stunning red rock formations sculpted into the cliff face surrounding Piana and declared a UNESCO World Heritage Site in 1983.
Open In Google Maps
Give us feedback 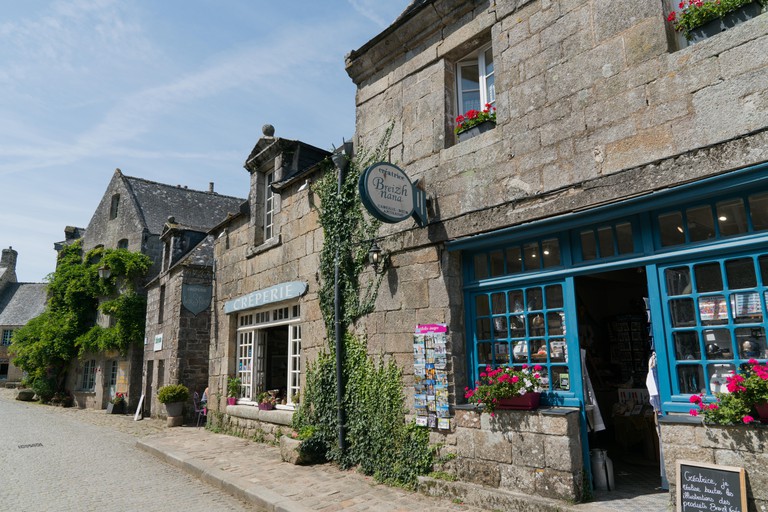 Historic and picturesque French village of Locronan | © makasana photo / Alamy Stock Photo
An official Petite Cité de Caractère en Bretagne, the charming village of Locronan is brimming with Breton culture. From the 15th century onwards, the town was an important sailcloth manufacturing hub and many of Locronan’s finest architecture – including the late medieval Church of Saint Ronan – were built during this prosperous period. Filmmakers have long been charmed by the village’s beauty and film buffs may remember Locronan from movies like Roman Polanski’s 1979 costume drama Tess.
Open In Google Maps
Give us feedback 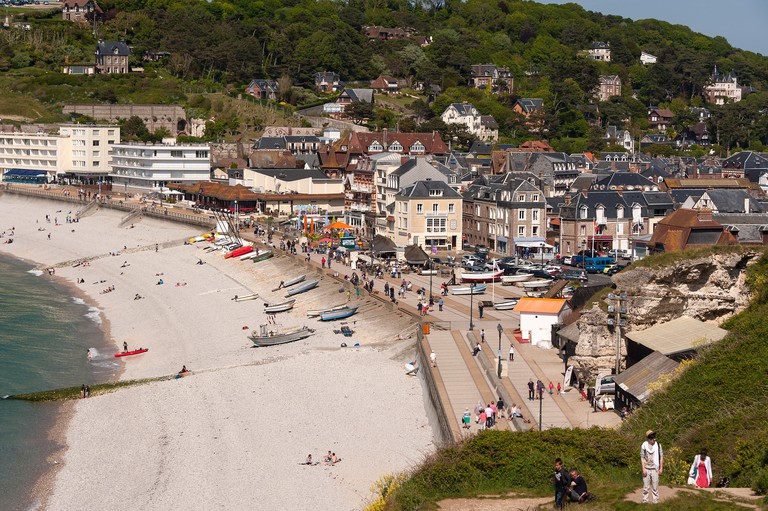 Etretat famous cliff, Normandy | © MARCO CATTANEO / Alamy Stock Photo
Clustered around a sheltered bay on Normandy’s beautiful Alabaster Coast, Étretat is best known for the dramatic rock arches sculpted into the weather-beaten, white cliffs that surround the village and immortalized in the works of artists like Claude Monet. A pretty, pebbled beach flanks the seaward side of town while in the village proper
Open In Google Maps
Give us feedback 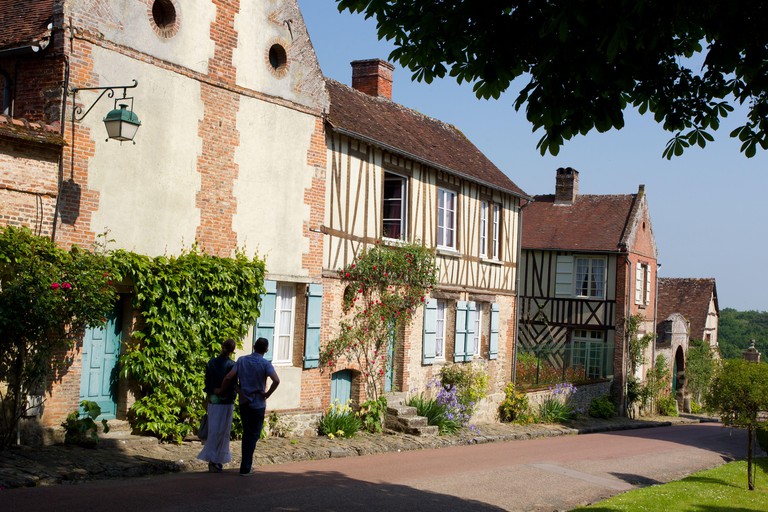 The village of Gerberoy, listed "Plus beaux villages de France" | © Andia / Alamy Stock Photo
With its narrow cobbled streets and picture-perfect cottages dating back to the 17th and 18th century, it’s hard to deny Gerberoy’s charm. Post-impressionist painter Henri le Sidaner found Gerberoy so charming that he bought a house there and created a beautiful rose garden, kick-starting an important trend for the town – many of its home and gardens are adorned in beautiful climbing roses and wisteria and the annual Rose Festival held each June celebrates Gerberoy’s floral displays.
Open In Google Maps
Give us feedback 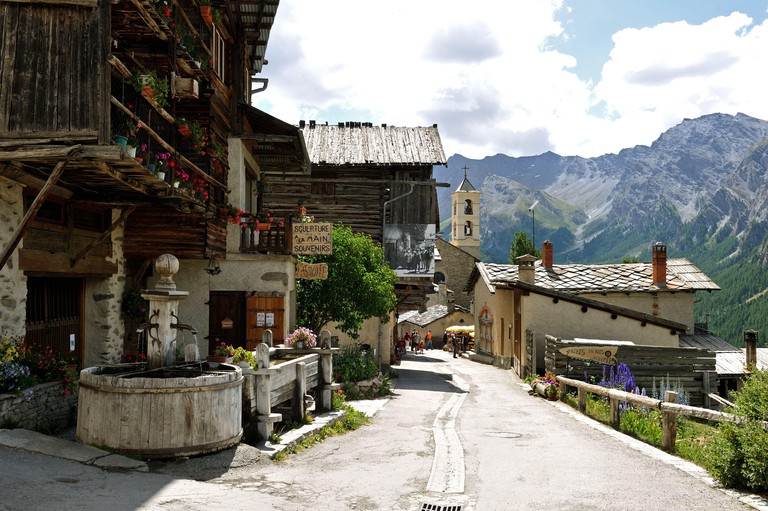 Saint-Veran village, Les Plus Beaux Villages de France, highest municipality in Europe | © mauritius images GmbH / Alamy Stock Photo
Located in the heart of the Parc Naturel Régional du Queyras in the French Alps, Saint-Véran– with an altitude of over 2,000 meters – is the highest commune in all of France. Surrounded by dramatic mountain scenery, the village is home to just under 300 residents, though in wintertime its population swells with tourists seeking skiing opportunities while summer sees many flock to the town to hike the scenic trails.
Open In Google Maps
Saint-Véran, France
Give us feedback 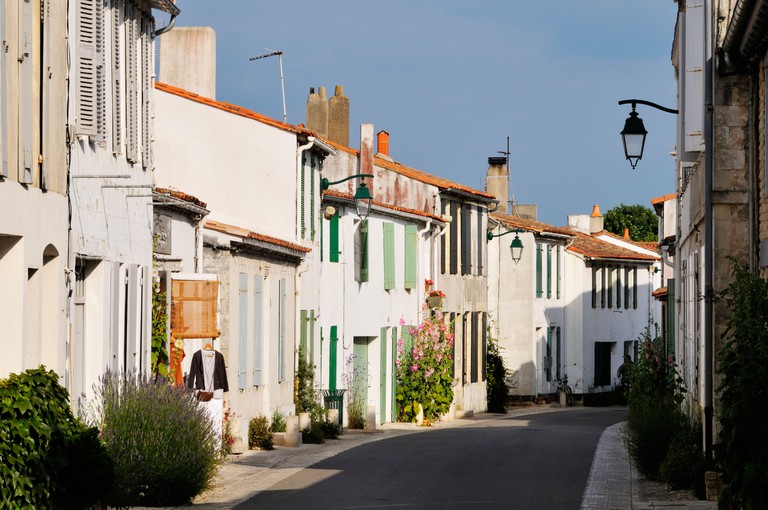 Ars-en-Ré | © Hemis / Alamy Stock Photo
Located on the northwestern tip of Île de Re – the beautiful island off the western coast of France – Ars-en-Ré is an idyllic seaside retreat boasting both charm and culture. The focal point of the village is the beautiful Église Saint-Étienne with its white bell tower and black spire and a food market – held daily during summer months – sells local produce including Île de Re’s famous oysters. For sailing and gastronomy enthusiasts, there’s a picturesque harbor populated with chic cafes and restaurants.
Open In Google Maps
Give us feedback 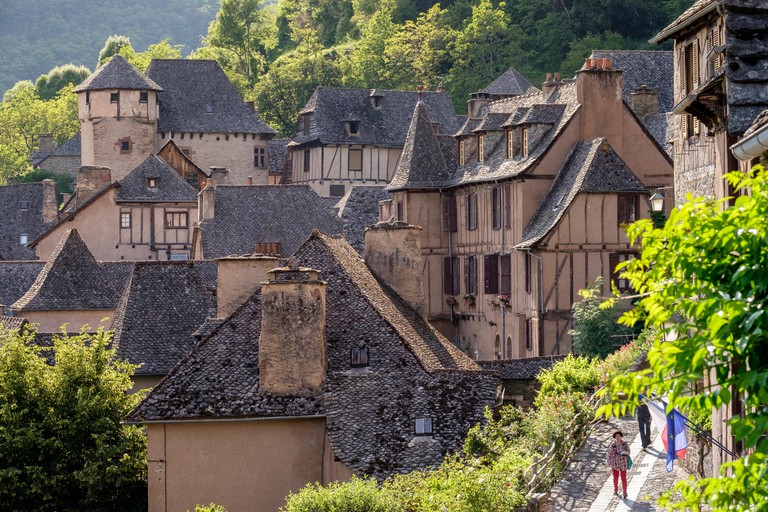 Medieval buildings and roofs in Conques | © David Reed / Alamy Stock Photo
One of the most important stops on the Santiago de Compostela pilgrimage route, Conques prides itself on its unique Romanesque architecture and religious artifacts. Located in the heart of the Lot Valley, the village is the site of the Abbey-Church of Sainte Foy – a UNESCO World Heritage Site built between the 11th and 12th century home to an ornate tympanum depicting the Last Judgement, stained glass windows crafted by acclaimed French artist Pierre Soulages and a trove of meticulously preserved religious treasures including the gold, bejeweled Reliquary of Sainte Foy statue.
Open In Google Maps
Give us feedback
Give us feedback