The Most Beautiful Towns in Provence, France 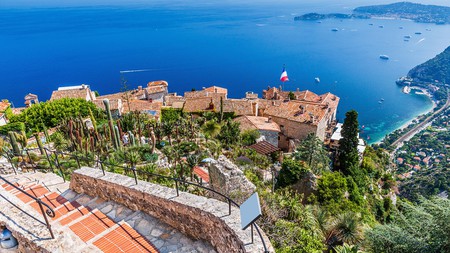 From rugged hilltops to glorious Mediterranean beaches, the towns of Provence are a traveller's delight | © Sorin Colac / Alamy Stock Photo

Not for nothing has France been listed among the world’s most popular holiday destinations, with so many diverse landscapes and artistic treasures to discover. One region that has helped it stay high on the list is Provence, with its warm climate, glittering Mediterranean horizons, sophisticated cities and untamed, mountainous countryside. Here we explore its most enchanting towns – and the cultural attractions they have to share. 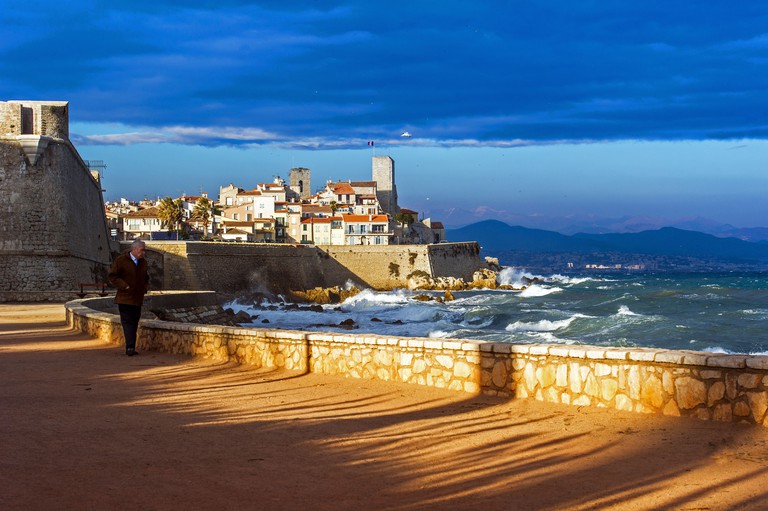 Courtesy of Norbert Scanella / Alamy Stock Photo
Posh yachts, glorious stretches of golden sand and that French Riviera vibe all make Antibes a hit with holidaymakers. Wander its romantic 16th-century ramparts and narrow cobblestone streets lined with flower-festooned buildings – you’ll soon see why it appealed to artists and writers including Graham Greene, Monet and Picasso, whose genius is on display at the Musée Picasso in the medieval Château Grimaldi. Pencil in a visit to Cap d’Antibes, beyond town, for its hidden beaches backed by millionaire mansions.
Open In Google Maps
Antibes, Provence-Alpes-Côte d'Azur, France
Give us feedback 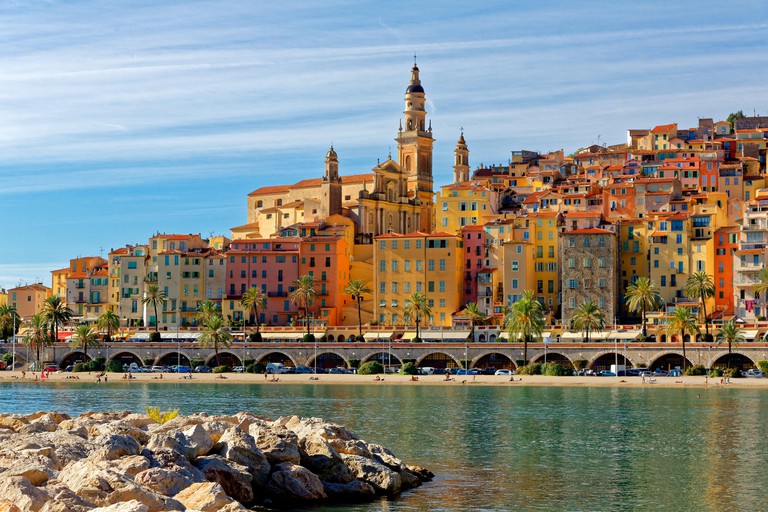 Courtesy of John Kellerman / Alamy Stock Photo
Positioned snugly – and smugly – by the Italian border between the Alpes Maritimes and the Mediterranean, this lesser-known coastal corner of the Côte d’Azur has a blissful microclimate to rival its glitzier neighbours. Such a balmy ambience led to a centuries-long tradition of lemon cultivation which, along with the proximity to Italy, infuses much of the local cuisine. Visit the attractive old port, looking up at the pastel-coloured buildings, the colourful sub-tropical gardens and the museum dedicated to Jean Cocteau housed in an ancient fort.
Open In Google Maps
Menton, Provence-Alpes-Côte d'Azur, 6500, France
Give us feedback 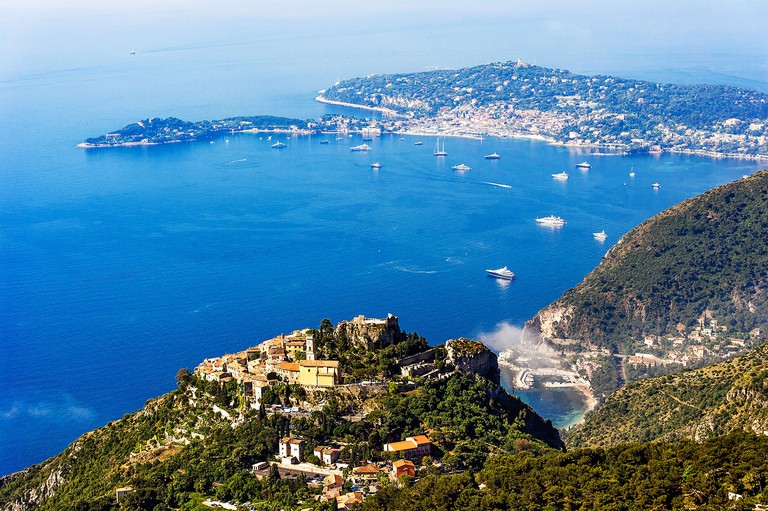 Courtesy of Norbert Scanella / Alamy Stock Photo
Inland between Monaco and Nice, 420m (1,400ft) above sea level, this is a picture-perfect medieval hilltop village topped with the craggy ruins of a 12th-century castle, like a cherry on a perfect cup cake. The nearby Jardin Exotique cactus garden is worth the steep walk, layered with succulents, citrus trees and tropical plants. So is the sunshine-yellow Baroque church dating back to 1764. You’ll find yourself gawping at the mesmerising views of the coast the higher you climb.
Open In Google Maps
Èze, Provence-Alpes-Côte d'Azur, 6360, France
Give us feedback 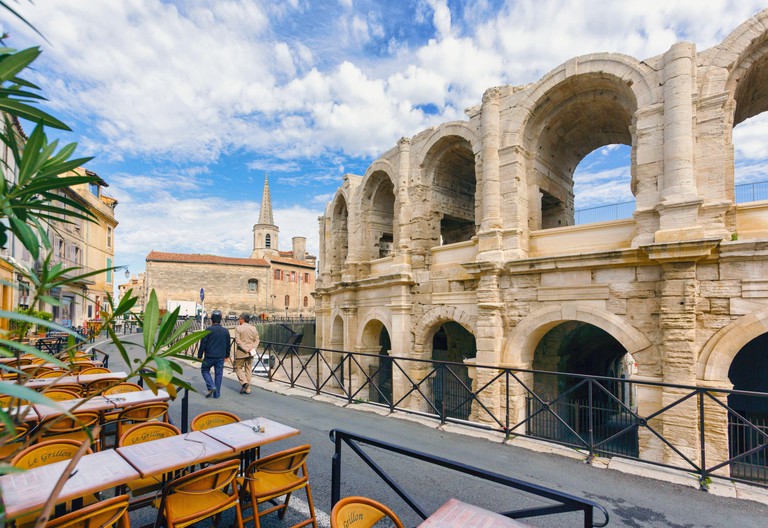 Courtesy of Classic Image / Alamy Stock Photo
On the cusp of the Camargue National Park in the Provence-Alpes-Côte d’Azur region, Arles is a heady blast of Van Gogh nostalgia – the artist painted in excess of 200 works around this lovely Roman town. The stately amphitheatre, one of the largest in Roman times, is part of the reason for Arles’ Unesco World Heritage Site status. The twisting aluminium tower designed by Frank Gehry brings the city’s architecture bang up to date: one more reason to come see the place for yourself.
Open In Google Maps
Arles, Provence-Alpes-Côte d'Azur, France
Give us feedback 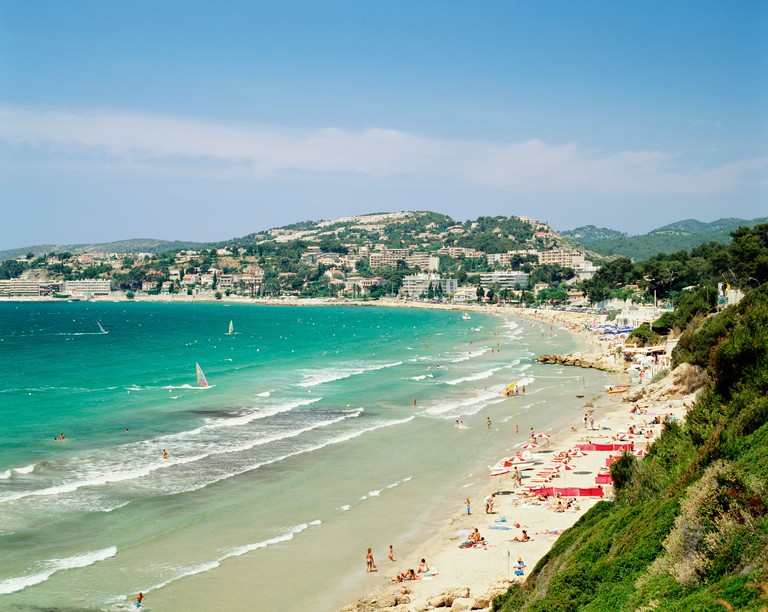 Courtesy of nobleIMAGES / Alamy Stock Photo
In a sheltered bay backed by hills, this former fishing port has long attracted visitors, notably writers Katherine Mansfield and Thomas Mann. Today it’s popular with French holidaymakers from Marseille and nearby Toulon, as well as tourists in love with its sunny, sandy beaches. If you would prefer a little privacy, head to the smaller rocky bays and creeks along the coastal path. In town, stroll the palm-tree lined harbour, licking a scoop of refreshing lavender ice cream; sample the renowned local wine, particularly the red, cultivated in the surrounding sun-ripened vineyards; and enjoy the relaxed, Mediterranean pace of life.
Open In Google Maps
Bandol, Provence-Alpes-Côte d'Azur, France
Give us feedback 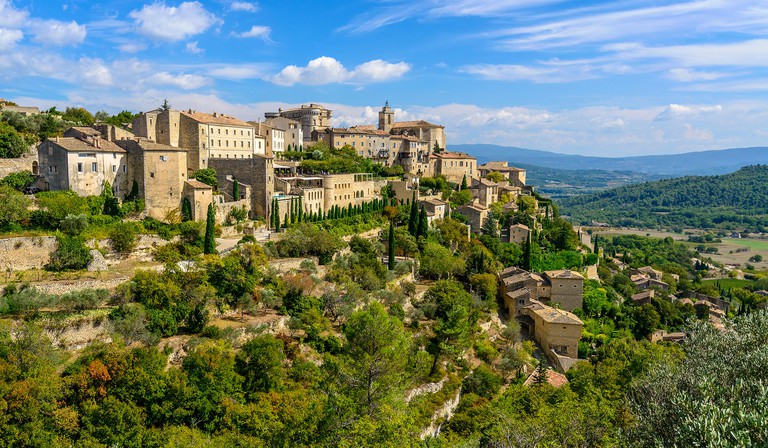 Gordes is a remote delight, amid the rugged landscapes of the Luberon Regional Nature Park. Cobbled streets and houses built of golden stone wind their way up around a mountain, culminating in a 16th-century château. The village has been home to celebrated painters, among them Marc Chagall, André Lhote, Jean Deyrolle, Victor Vasarely and Pol Mara. You can see how the village might have inspired them, surrounded by greenery and jagged rocks. Highlights for visitors include the Pol Mara Museum, the historic village of Bories, and the summer music festival. 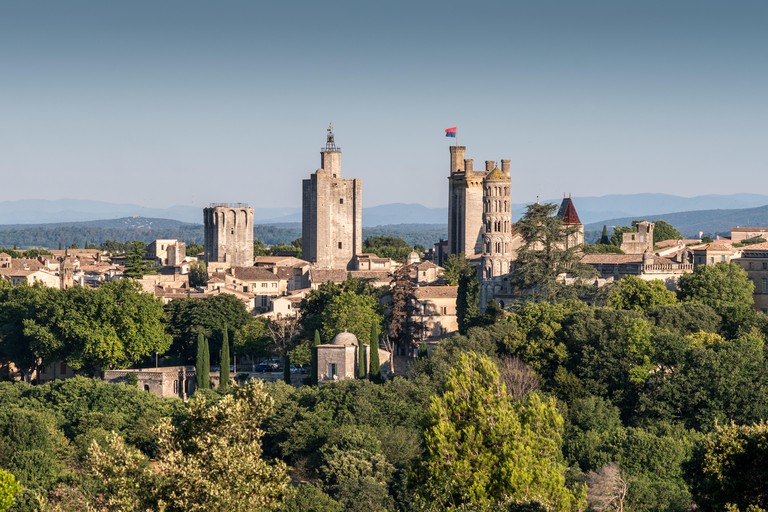 Romantic Uzès, ‘the First Duchy of France’, still has a duke, who resides in a castle in the town centre, with its medieval residences, cobbled streets, flourishing gardens and landmark Tour Fenestrelle. The most eye-catching historical feature is the nearby Pont du Gard, a perfectly preserved Roman aqueduct, frequently listed among France’s most popular attractions. Curiously, Uzès remains little known among tourists – visit now to make the most of its peaceful, authentic atmosphere. 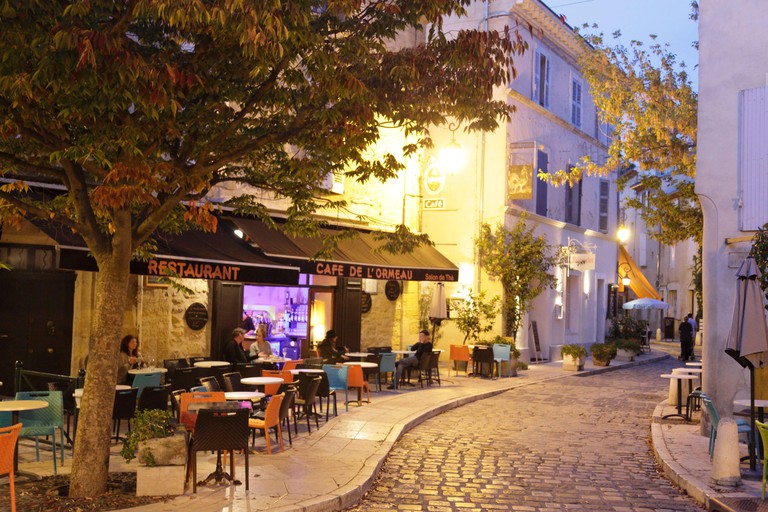 With its neolithic cemetery, Roman city remains, grand Renaissance château and quaint stone homes, Lourmarin is an historic layer cake. Tucked in a lush valley in the Luberon mountain range, it is a place for art lovers and bookworms, home to a handful of galleries as well as the tombs of writers Albert Camus and Henri Bosco. If you like food you’re in clover – the centre has traditional bistros and cafes, and one of France’s most prestigious chefs, Reine Sammut, runs the restaurant Auberge La Fenière with her daughter, in an historic building just beyond town. 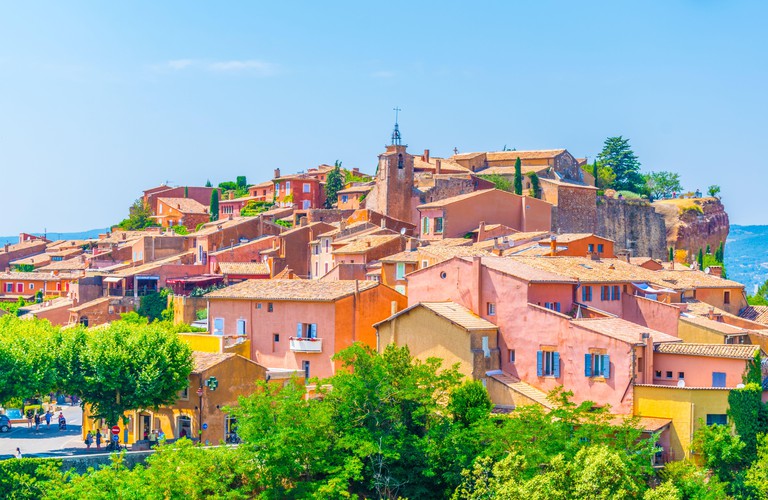 Roussillon is, along with Gordes, the most popular destination for those visiting the Luberon massif, teetering at the top of a cliff beside an old ochre quarry. It has charming 17th- and 18th-century dwellings painted in shades of the aforementioned local rock, backdropped by vivid mountain vegetation and rugged panoramas that have attracted many an artist over the years. Not for nothing does Roussillon have an impressive art and gallery scene. The ochre for which the place is celebrated makes for all kinds of activities – cycling tours along the cliff, for instance, and pigment-making workshops. 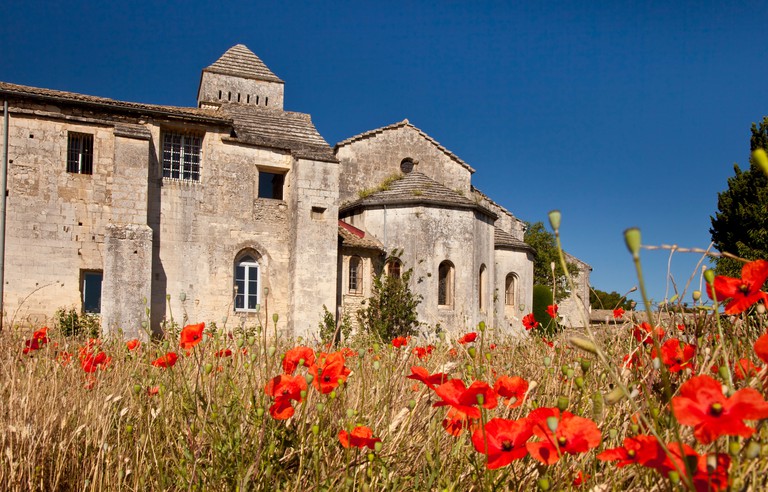 With medieval walls, ornate fountains and one of the oldest arcs de triomphe in the country, this small mountain community is a must for history and art lovers. It inspired some of the most celebrated works by Van Gogh, who painted The Starry Night (1889) while a patient at the local asylum, along with The Wheat Field series (1889–1890); numerous depictions of roses, irises and forest trees; and haunting views of the hospital. You can also visit the birthplace of astrologer Nostradamus, before settling in at a cosy cafe for some of Saint Remy’s famously good cuisine. 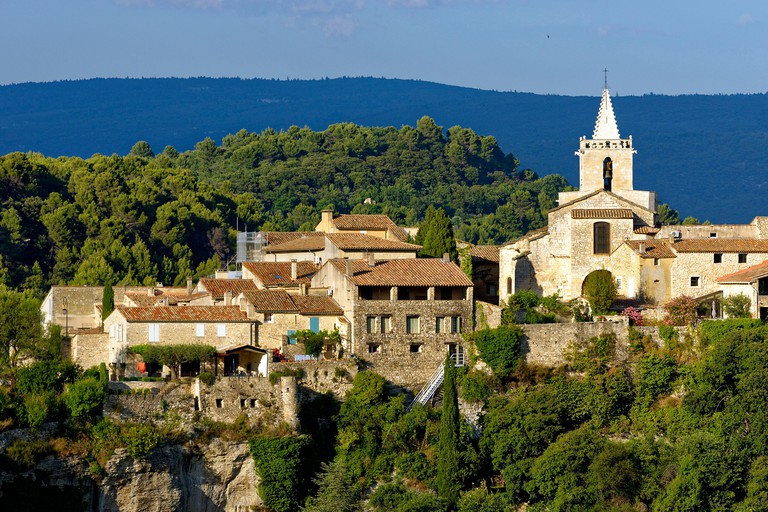 On a ridge near the Nesque river canyons is another of France’s most beautiful villages. Visitors are drawn by the picturesque houses, ramparts and churches, dating from the Middle Ages, as well as the magnificent rock formations and one of the oldest shrines in France, the pre-Romanesque Baptistère de Venasque. These historic sights owe their fine condition to their isolated, rural location, which has escaped the modifying march of centuries. Venasque is famed for its production of cherries and grapes, its farms reputedly producing some of the best to be found under the Mediterranean sun. 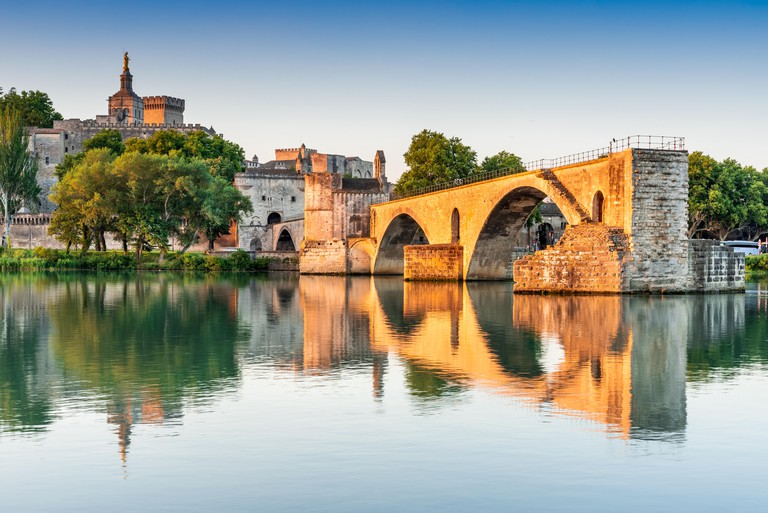 Once a centre of the Christian world, Avignon is a stronghold of chapels and churches, crowned by the architectural masterpiece that is the Palais des Papes (Palace of the Popes). Its historic buildings come down to the serene waters of the river Rhône , where you’ll find the medieval bridge (and Unesco World Heritage Site), immortalised in the song ‘Sur le Pont d’Avignon’. The town is a focal point for culture and wine: its theatre and music festivals are internationally renowned, and its Côtes du Rhône vineyards draw thousands of visitors every year. 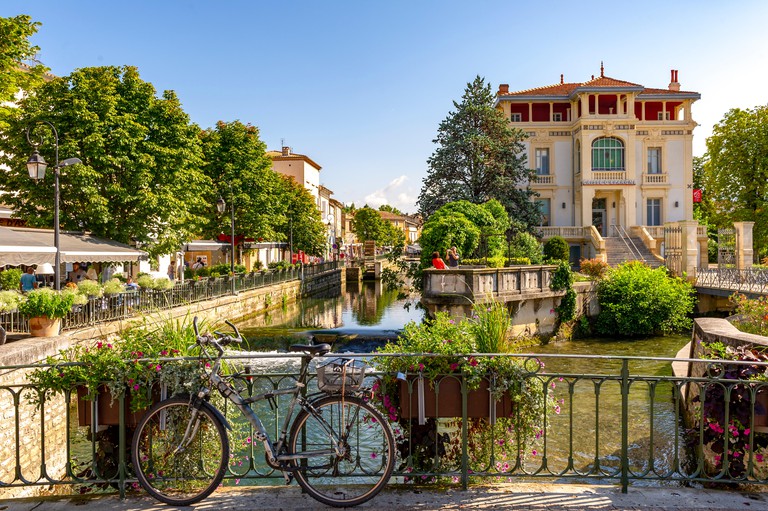 What was formerly a nautical village is now a major attraction for antiques lovers, hosting vibrant traditional markets every Sunday. Its annual antiques fair is considered one of the best in the world, drawing hundreds of dealers and making for fascinating browsing for wandering weekenders. There’s plenty more to explore: classic riverside cafes, lines of time-honoured shops and winding stretches of water plied by historic boats, which have earned the town its nickname: ‘the Venice of Provence’. 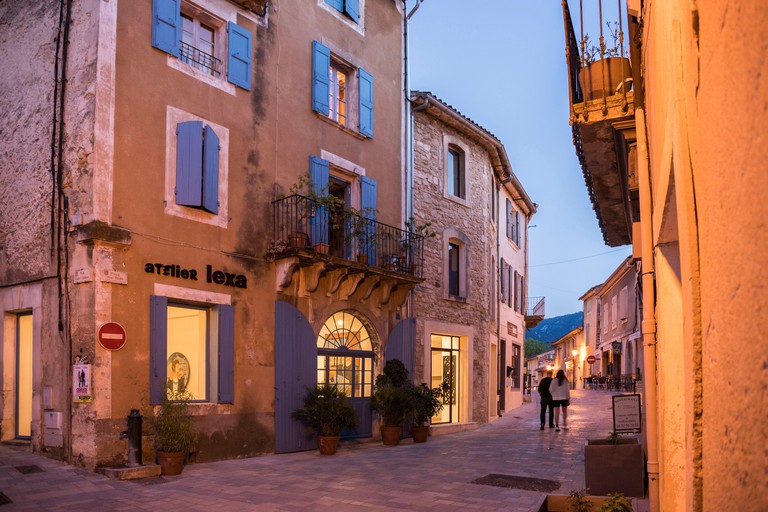 With its dignified 18th-century homes, sturdy medieval ramparts and verdant, hilly surroundings, Ménerbes is a fascinating place for a weekend. Many famous artists and writers have made their home here, among them Nicolas de Staël, the Marquis de Sade, Peter Mayle (author of the international best-seller A Year in Provence) and, most famously, Pablo Picasso. The village is renowned for its quality wines and truffles, which attract gourmands in their droves. 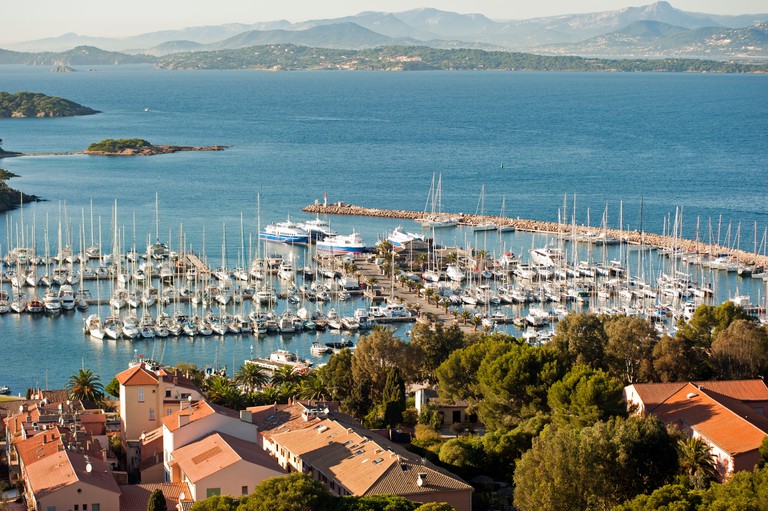 This island, reached by ferry from Toulon, is relatively unfrequented by tourists, but has masses of appeal: beaches, exotic plants, transparent waters and, crucially, tranquillity – it is a government-protected environment. Whatever your bag and your budget, you’ll find a hotel (and restaurants) to suit, and there are plenty of events, including yearly jazz and sailing festivals. Come and explore this place before everyone else discovers it.