The Best Guesthouses and B&Bs in Normandy, France 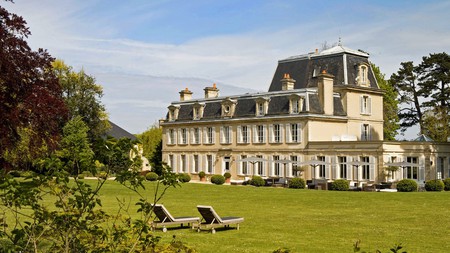 From the breezy beauty of Honfleur to the majestic Mont Saint-Michel, the Normandy coastline in France is dotted with historical sights, seaside villages and golden sandy beaches. Enjoy a cider and Camembert-fuelled stay in Normandy at these welcoming guesthouses and B&Bs.

As a region that has shaped much of French and European modern history, Normandy remains one of France’s best-visited destinations. Although its iconic monasteries, medieval tapestries and solemn battlegrounds make it a destination for contemplation, its renowned cheese, apples and seafood mean you won’t go hungry while doing so. Here’s our pick of Normandy’s top guesthouses and B&Bs. 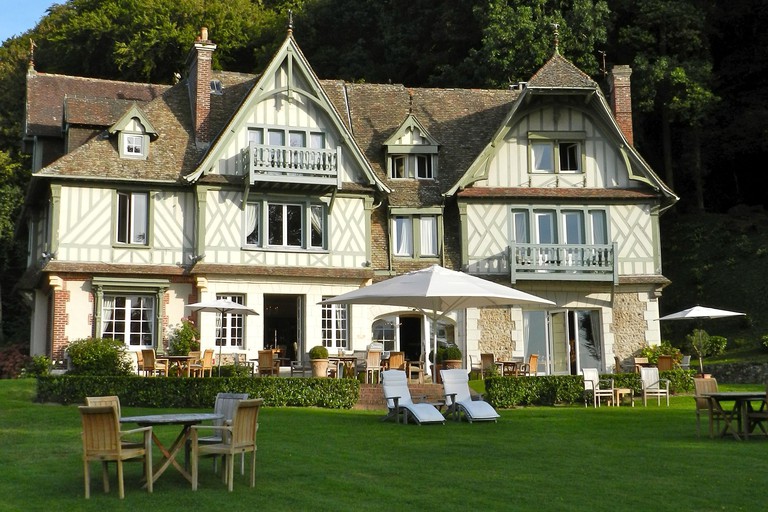 Courtesy of Le Manoir des Impressionnistes / Expedia
View Rooms
Enjoy spectacular views over the Seine estuary in this prestigious 18th-century manor in Honfleur. Along with 11 immaculately decorated rooms, Le Manoir’s three acres (1.2ha) includes a sea-view spa on the site of an old farm. Exclusive to residents, the spa is open every day of the week, and treatments include foot and back massages, face and body scrubs and marine mud and seaweed wraps.
More info

Courtesy of Domaine du Vertbois / Expedia
View Rooms
Marie and Armelle are the jolly hosts of this enchanting forest getaway in La Haye-du-Theil, where you’re encouraged to get active. There’s a clay tennis court on-site, hiking and cycling trails nearby and a games area including a trampoline, swings and ping-pong table. Armelle’s vegetable garden is just as vibrant, and she’ll be delighted to serve up evening meals based on her latest organic produce. For breakfast, the free-roaming chickens provide freshly laid eggs.
More info 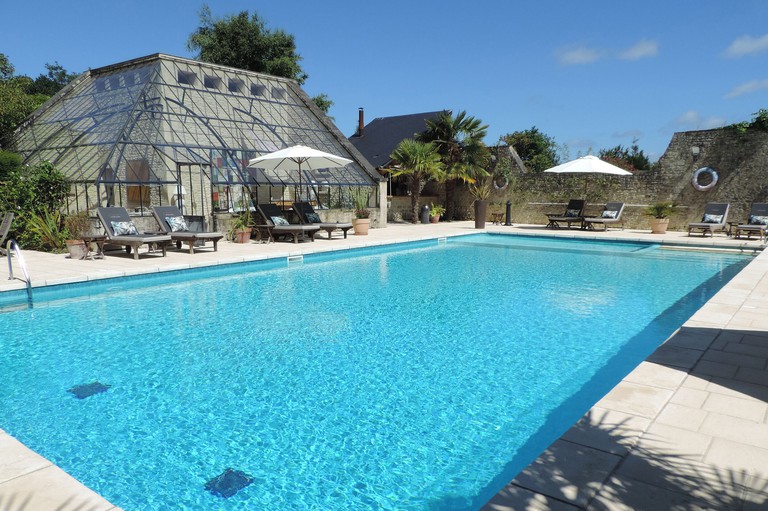 Courtesy of Château La Chenevière / Expedia
View Rooms
Tourists in search of history will do well to base themselves at this characterful estate on the Norman coast. The D-Day landing site of Omaha Beach is a 20-minute drive east, while a shorter drive south will find you in Bayeux, where you’ll discover the 11th-century cathedral, and a museum dedicated to the Battle of Normandy. With its floral print walls, gold-framed portraits and velvet headboards, this restored 18th-century hotel isn’t short on its own historical allure.
More info 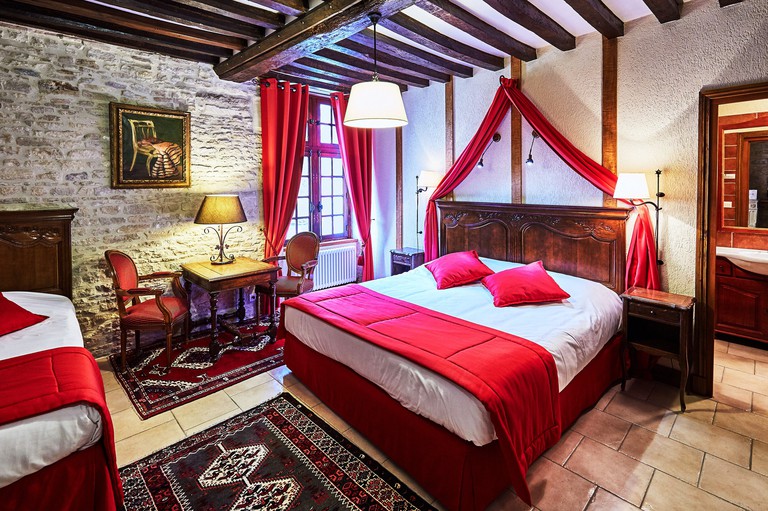 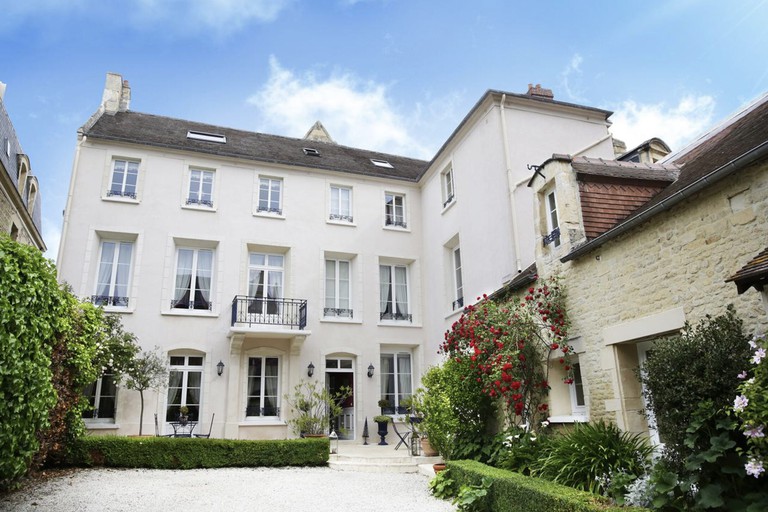 Courtesy of Clos Saint-Martin / Booking.com
There’s an impressive attention to detail in each of the six themed rooms at this Caen B&B. The Red Room is inspired by Normandy’s music festivals, the bohemian Blue Room showcases posters of films shot in the region, and the Green Room is decorated with art illustrating local flora and fauna. The region’s produce is showcased at breakfast time, and also in a well-stocked minibar. Local crafts and products can be bought directly from the hotel in support of local artisans. 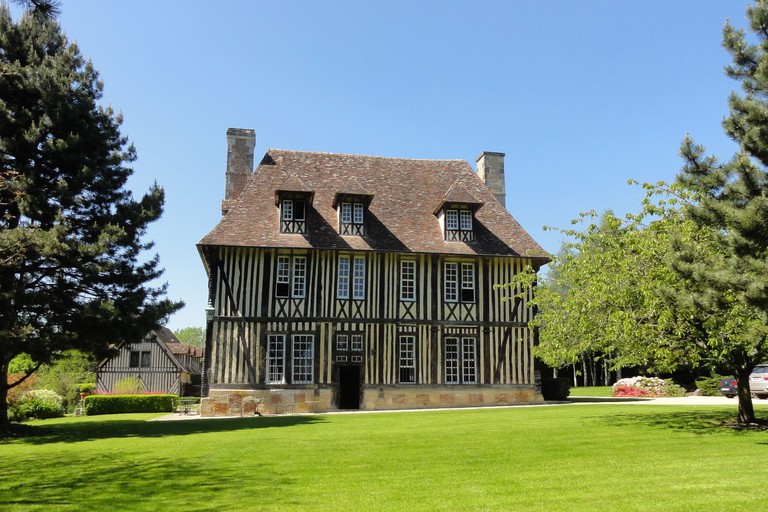 Courtesy of Les Manoirs des Portes de Deauville / Expedia
View Rooms
This countryside retreat offers six acres (2.4ha) of serenity with an outdoor heated pool, jacuzzi and sauna. For those looking to explore the wider region, the hotel offers car hire. The Amirauté golf course is nearby, while a 10-minute drive will get you on the beach at Deauville. Although there’s no restaurant on site, the hotel has partnered with local eatery L’Auberge du Vieux Tour to have meals delivered to your room. Be sure to try the Normandy apple tasting platter, featuring apple tarts, juice and the local boozy favourite, Calvados.
More info 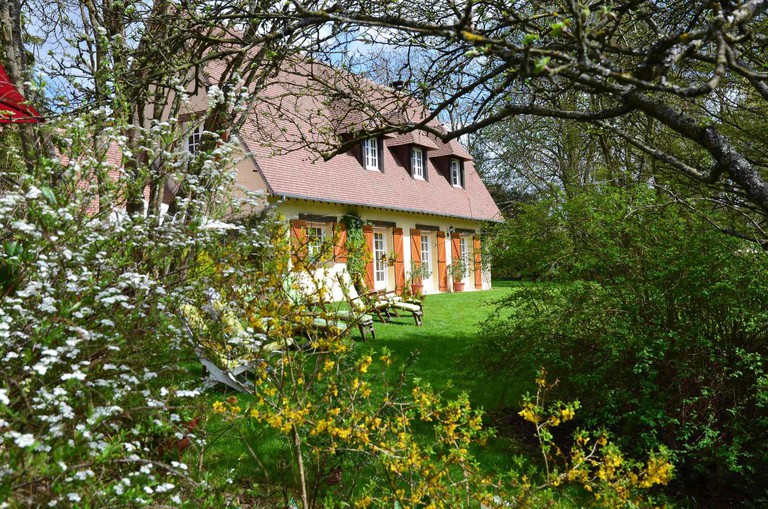 Le Clos Fleuri is just a five-minute walk from Claude Monet’s House in Giverny; its location on a quiet side street allows a welcome respite away from the crowds. The bed and breakfast offers three rooms – Water Lillies, Poppies and Clematis – that reflect an Impressionist influence through tasteful floral fabrics, ample sunlight provided by large windows, warm wood furnishings and potted plants. Encircling the house are 2,500sqm (27,000sqft) of perfectly manicured gardens, which could rival those of Monet, tended by the property owners and avid gardeners, Danielle and Claude. Le Clos Fleuri is the neighbour of Sainte-Radegonde church, Monet’s final resting place. 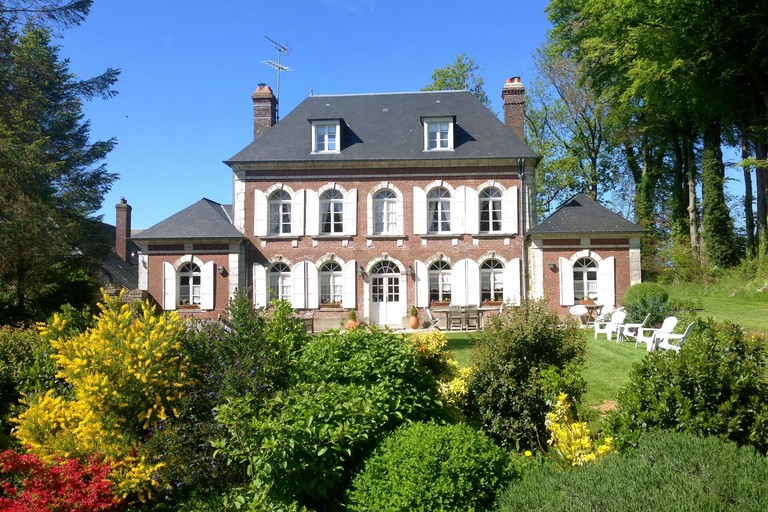 The white-chalk cliffs of the Alabaster Coast are especially noteworthy in the town of Étretat, which is just a 10-minute drive from Le Clos des Hautes Loges. Four guest rooms, three cottages and a luxury gypsy-style caravan offer a range of options for guests looking to soak up this region brimming with natural beauty. The newest of their cottages, Les Sardines, provides an especially authentic Norman experience in a half-timbered house with exposed wood beams and a stone roof, surrounded by open plains. 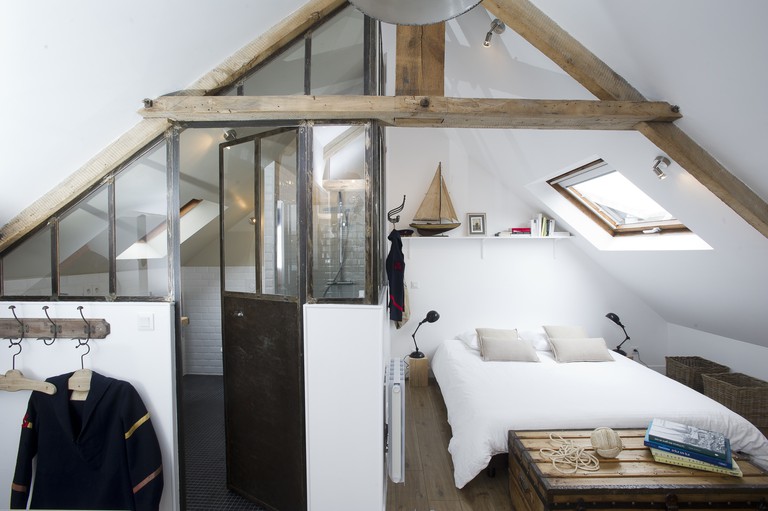 Astrid and Laurence of Les Filles du Bord de Mer offer contemporary beach house rentals in the seaside town of Port-en-Bessin. There are a total of nine rentals, four of which are seaside and the others within 100m (300ft) of the seaside. All units are fully equipped with a kitchen, wifi and linens. Though not a bed and breakfast, seafood and cheese plates or a picnic basket with local goods can be provided on request. Be sure to check out their boutique store, La Compagnie Ordinaire de la Mer, for home decor and local produce. 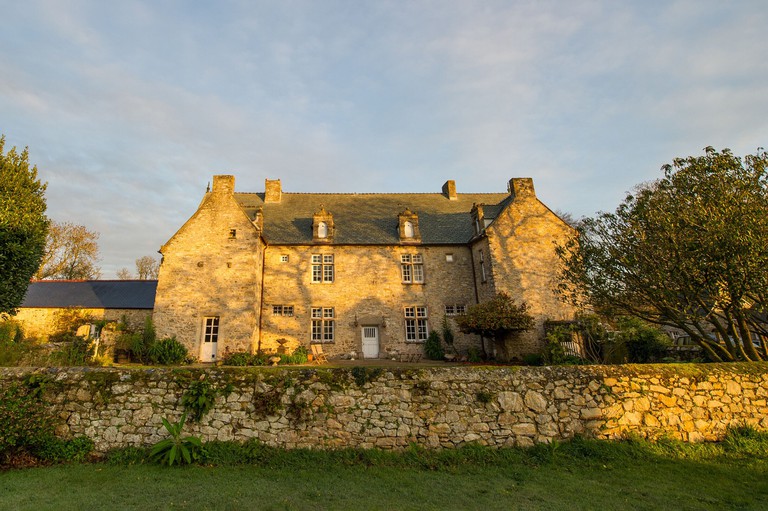 Manoir de la Fieffe is located 3km (1.9mi) north of the sandy beaches of Cotentin near the city of Cherbourg. You’ll have the choice of three rooms housed in a 16th-century manor or a fully equipped cottage rental. Rooms are spacious and full of light; each has its own private bathroom. The area of Cotentin is best known for being the site of Utah Beach, the American landing site on D-Day, making la Manoir de la Fieffe a great base for touring monuments of the Second World War. 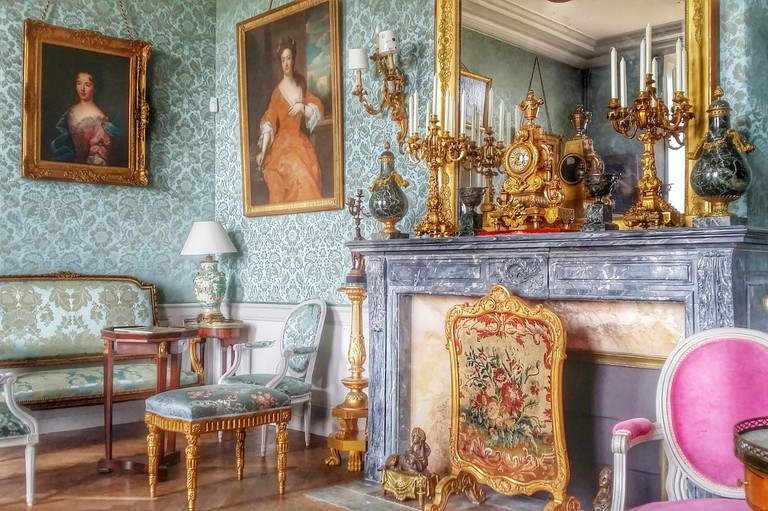 Ever dreamt of sleeping in a pink castle in the French countryside? Meet Château de Chantore, a château with three suites and two bedrooms draped in quintessentially French decor – from toile de jouy in the Mont Saint-Michel suite (named after the view it boasts of the famous island) to 18th-century antiques in the Viscount suite. The property is an attraction worth visiting in itself, surrounded by a 47-acre (19ha) park that includes exotic trees, bamboo jungles, rivers, lakes and waterfalls. You’ll also have partial access to the castle, including the sitting room, Chinese room, dining room and stables. The rest of the property is up for view-only through a private tour booked with the owner. 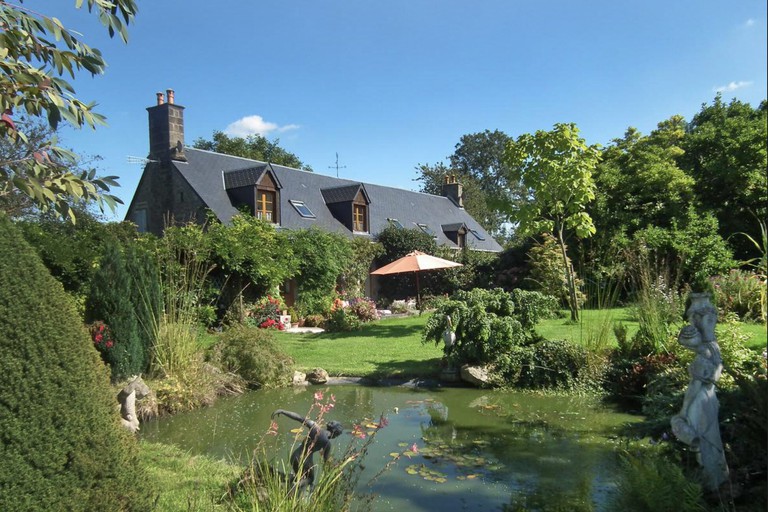 Where the Calvados and Orne regions of Normandy meet is known as Swiss Normandy, an adventure lover’s idyll in the Orne Valley. Rocky cliff faces are perfect for climbing, gorges can be navigated by boat, and hiking trails abound. If this seems up your alley, stay at Les Sabots, a 200-year-old stone house with two rooms surrounded by lush gardens. The owners, Nick and Kim, open their doors between April and October and are knowledgeable in the region, sharing information on surrounding trails and restaurants. 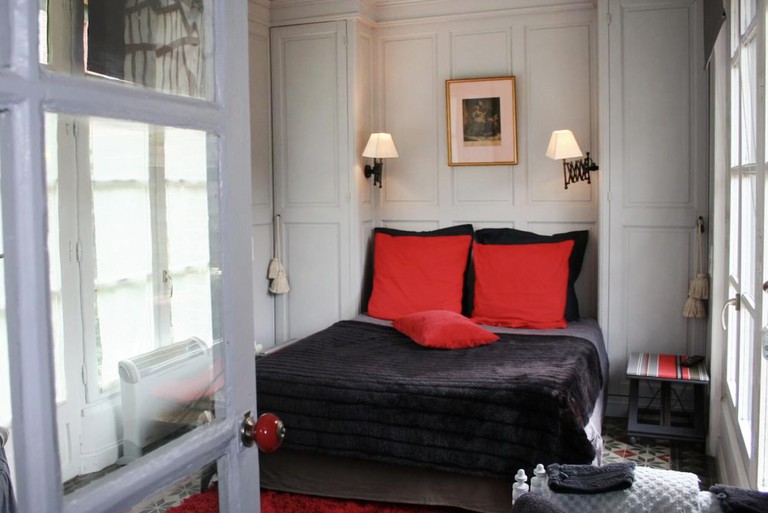 In the small village of Berville-sur-Mer, just 12km (7.5mi) away from Honfleur, Aux Rives de Honfleur sits among lush gardens alongside the Canal de Retour, an offshoot of the Seine River. The hosts provide you with the option of four spacious rooms, two of which come with a private terrace, and all with a private bathroom. During nicer weather, breakfast is served in the garden, complete with house-made preserves concocted by Marie, the owner. Lunch and dinner services are available on request. 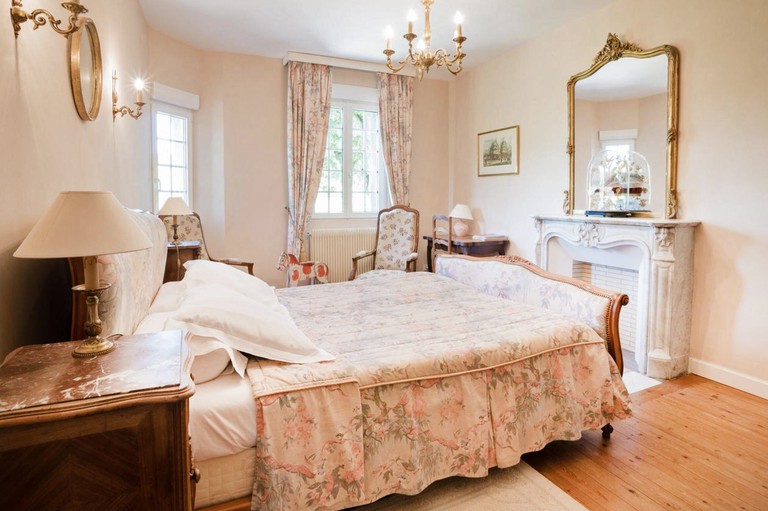 Discover the Manoir de Sens, built on the grounds of a former château destroyed during the Revolution, in the town of Beuvron-en-Auge, which is also known as one of the Most Beautiful Villages in France. The Manoir de Sens comprises seven bedrooms, housed in a typical Norman half-timbered home, alongside a stud farm where the owners, Philippe and Anne David, breed horses. Inside, the manor is luxuriously decorated in 18th-century style and features crystal chandeliers and intricate crown moulding.