Ten Works By Gauguin You Should Know 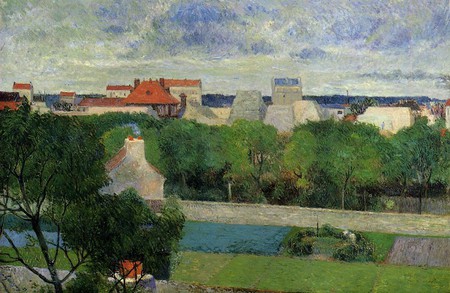 Perhaps it was his Peruvian ancestry, but Paul Gauguin (1848-1903) was never quite a fully-paid up member of the French art scene, preferring to travel the globe to realize his artistic vision. Conventionally labelled a Post-Impressionist, Gauguin began painting under the influence of Camille Pissarro only to shift through Synthetism and Cloisonnism until he began exploring the primitive imagery of Tahiti. Today censored by some as a colonialist and exploiter of native peoples, Gauguin was, nevertheless, a major influence on Picasso and the Fauves. Here are ten of his finest works.

The Market Gardens of Vaugirard, 1879

Gauguin’s early artistic career was far from a meteoric rise. He had a spell in the French navy and worked as a stockbroker and businessman until 1882. Painting was only something for his free time, though in Paris he came to know the Impressionists, especially Camille Pissarro. In 1877 he moved to the Vaugirard district where he had a studio and exhibited in the fourth, fifth and sixth Impressionist exhibitions. The Market Gardens was shown at the fifth in 1880 and shows the rooftops, sky and colors of Vaugirard, as well as Gauguin’s early naturalist style, similar to that of Pissarro, whose works he owned and studiously copied.

Gauguin spent the 1880s wandering between locations – Rouen, Copenhagen, Panama, Martinique, Paris and Pont-Aven in Brittany, where he painted Vision after the Sermon in 1888. During this time, he distanced himself from the Impressionists, including Pissarro. In the painting, Gauguin depicts the biblical scene of Jacob wrestling an angel, watched by a group of Breton women. It demonstrates a style known as Synthetism and the technique of Cloisonnism. Synthetism was little concerned with realism or the subtlety of shading, or fine details, preferring two-dimensional forms and blocks of bold color bordered by firm outlines – the technique called Cloisonnism. Today you can see the painting in the National Gallery of Scotland in Edinburgh. 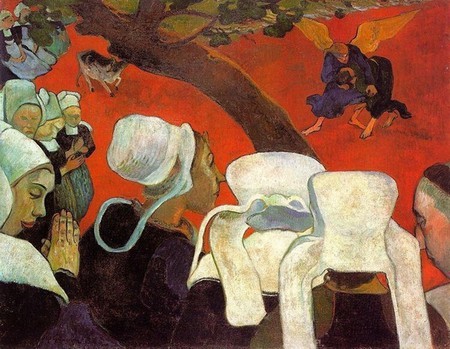 Cloisonnism was given its name by the critic Edouard Dujardin, in reference to the ancient technique of using wire to separate pieces of inlay on ceramics and in jewelry. The Yellow Christ is another study in Gauguin’s Cloisonnism. Again, it was painted at Pont-Aven. In the painting, Breton women are gathered at the base of the cross on which Christ is crucified. Gauguin takes the biblical scene at Golgotha and places it in the Breton countryside, for in the background we see rolling pastureland. The colors he uses are autumnal in feel – russet brown, parched yellow, and an almost amber Christ, which was modeled on the crucifix Gauguin saw in the local church in Pont-Aven. The painting is held by the Albright-Knox Gallery in Buffalo, New York. 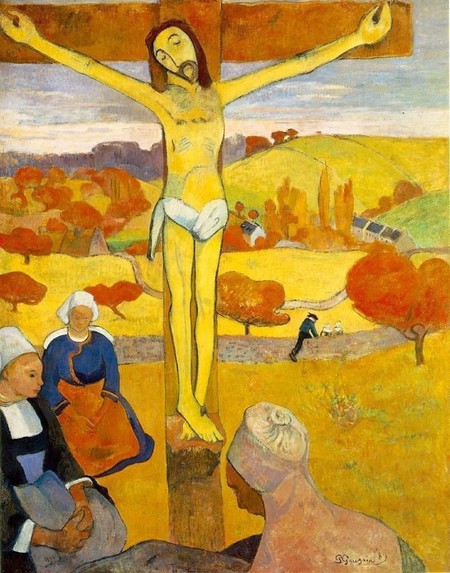 In-between the previous two works, Gauguin spent time in Arles with Vincent van Gogh. The idea had been to form an artist’s colony, only for Gauguin to show little interest in van Gogh. Famously, van Gogh confronted Gauguin with a razor, the same that he used later that day to cut into his ear. Gauguin found van Gogh the next day, covered in blood. Returning to Paris, he witnessed the guillotining of the criminal Prado. Together, these events had a profound impact on Gauguin, and the result is the strange sculpted jug he created. It carries a face on it, eyes closed, without ears, with red glaze drips running down – a merging of identities of Gauguin, the mutilated van Gogh, and the decapitated Prado in an image of human suffering. You’ll find the Jug in the Danish Museum of Arts and Design. 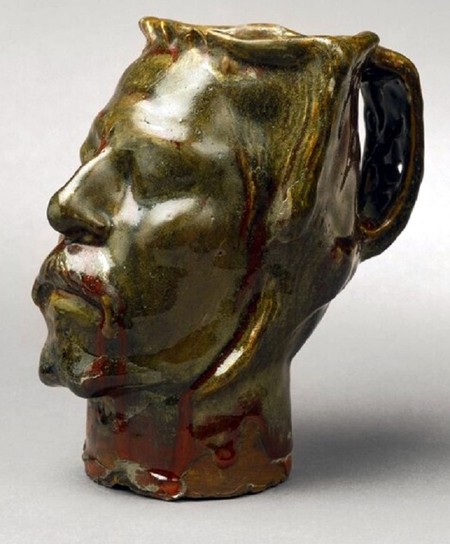 Self-Portrait with Halo and Snake, 1889

Gauguin painted over forty self-portraits in his life, including one version in which he depicts himself in front of The Yellow Christ. In late 1889 he tired of Pont-Aven and moved on to Le Pouldu, another fishing village in Brittany, staying in an inn belonging to a woman named Marie Henry. He spent his time decorating the walls of the inn. One of the works he created here was Self-Portrait with Halo and Snake, another important Cloisonnist work. Gauguin divides the canvas into two, amber above and yellow below, with his face divided between the two halves, a halo and apple hover above, and a serpent is shown in the lower section. They are symbols of duality, of heaven and hell – an allegory of the artist as angel and demon, creator of beautiful things but also the bohemian on the edge of society, opponent of bourgeois rectitude. 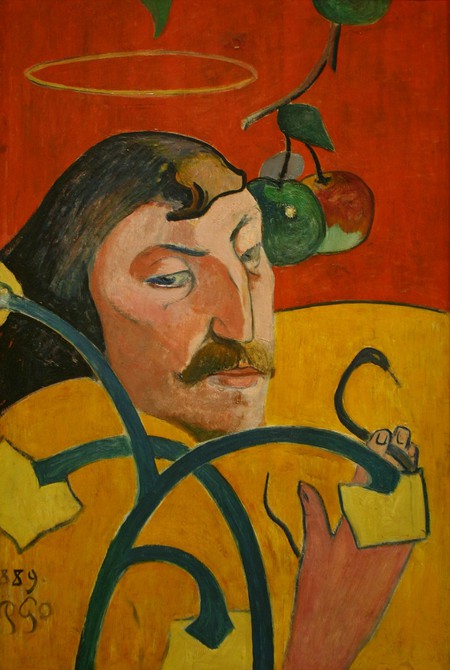 Tahitian Woman with a Flower, 1891

Gauguin travelled to Tahiti, part of French Polynesia in the Pacific for the first time in 1891. It is a place now indelibly linked with Gauguin and his work. His intention was to free himself from the trappings and stifling conventions of European civilization and to discover a new, innocent, paradisal place. Tahitian Woman with a Flower is one of his first works created in Tahiti, certainly his first attempt of a portrait of a native Polynesian woman, though here dressed in western clothes and structured in a traditional European portrait composition, with a Cloisonnist background of red and yellow areas. By 1892, Gauguin had sent it back to Paris for display; it’s now in the Ny Glyptoteket in Copenhagen. 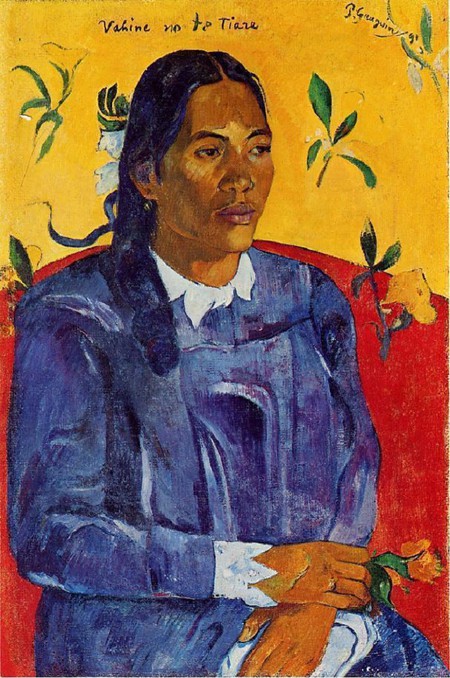 Gauguin stayed in Tahiti until 1893. During his time on the island he took a native wife, the thirteen year-old Teha’amana, whom Gauguin called Tehura. He would paint and sculpt her several times, most notably in the painting Spirit of the Dead Watching. In this we see the young woman stretched out upon a bed, nude, pensively eyeing the viewer, whilst behind her there is a strange, ghostly presence dressed in a black shroud watching over her. It’s believed to be a tupapau, a traditional Polynesian spirit from the underworld. To some critics, the ambiguous look of Teha’amana should be read as her anxiety towards Gauguin’s predatory sexuality rather than a concern for ancestral spirits. You’ll find the painting in the Albright-Knox Gallery along with The Yellow Christ. 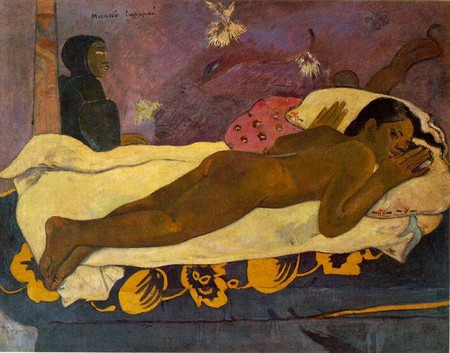 Gauguin expected to find a lost world of innocence when he reached Tahiti. Instead, he found a place where a century of colonialism had brought new virulent diseases, and a native culture spoilt by contact with the outside world. When Will You Marry? is, ostensibly, an image of two Tahitian women, one in native dress and with a white flower in her hair, and another, who looks asquint. In the background are the Tahitian highlands. We can read the painting as an allegory – the first woman advertises her availability for men with the white flower, she’s waiting to be colonized and taken just as Tahiti has been. Then, she too, will abandon native clothes for western ones. In 2015 the painting sold for $300 million to Qatari royalty, making it the most expensive artwork ever sold. 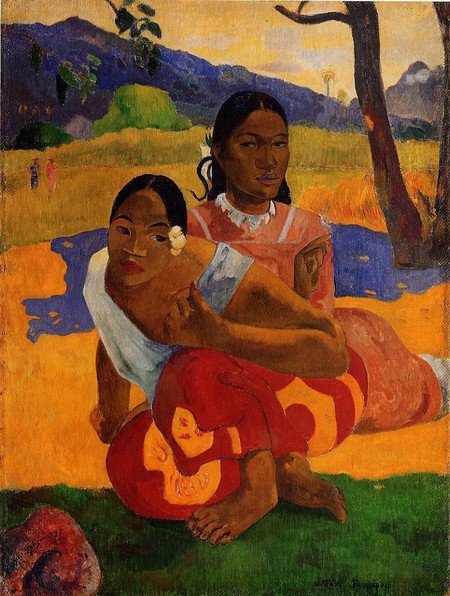 Returning to France in 1893, Gauguin split from his Danish wife of two decades. He worked on a ceramic sculpture of the Tahitian goddess of mourning, Oviri. Taking his inspiration from the imagery of Javanese, Assyrian and Egyptian sculpture, Gauguin’s sculpture shows the goddess with long blonde hair and huge eyes, bare-breasted and with one wolf beneath her feet and another held to her hip. He submitted it to the 1895 salon of the Société Nationale des Beaux-Arts, where it was met with opposition. Critics believe the two wolves, one trampled beneath the goddess; the other embraced by her, represent the old and new stages of Gauguin’s life as he began to abandon France and looked to Tahiti for his future – he returned in 1895. Picasso was a huge fan of the sculpture and it forms a major influence on his Demoiselles d’Avignon of 1907. 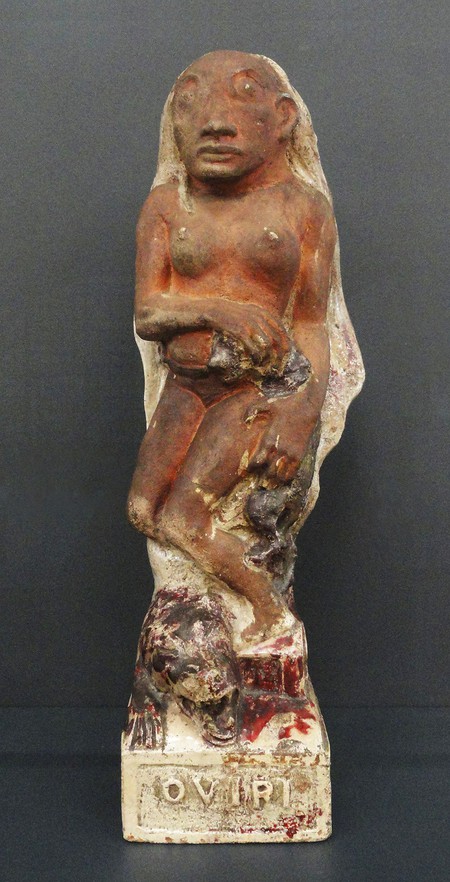 Back in Tahiti Gauguin suffered from various illnesses including syphilis, he had money troubles, and in 1897 learned of the death of his daughter. Despondent, he began work on what he would come to regard as his greatest work. When it was completed, he attempted to take his own life. The title presents three questions on the meaning of the cycle of life and death. The huge canvas, nearly four meters in width, must be read from right to left, starting with the women with a child, passing the laboring figures in the center, to the old woman on the left. Behind them is a strange, blue icon figure, representative of the mysteries beyond our understanding. It’s now held in the Museum of Fine Arts in Boston.

(c) Paul Gauguin via Wikimedia Commons
Give us feedback