Take a Journey into Mindfulness with Documentary 'Walk With Me' 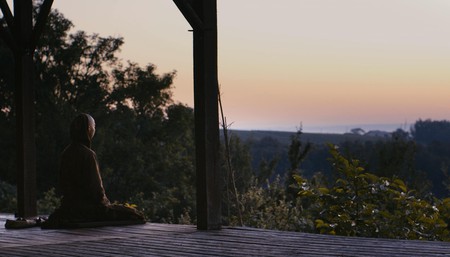 ‘Mindfulness’ is a word we hear everywhere these days. It’s the basis around the teachings of Thich Nhat Hanh, who in turn is the subject of a new documentary that recently screened at The London Film Festival.

Several years in the making, and narrated by Benedict Cumberbatch, we spoke to producer Max Pugh at the premiere in The Den, 100 Wardour Street about the journey he personally underwent, as well as the one he takes the audience on.

Culture Trip: What makes Thich Nhat Hanh such a compelling figure and subject for this documentary?

Max Pugh: Thich Nhat Hanh is known as the ‘grandfather of mindfulness’ – the man who brought the practice from its roots in Buddhism to the West. He was nominated for the Nobel Peace Prize by Martin Luther King Junior in 1967. But the Zen Master Thich Nhat Hanh isn’t actually the story of this film, rather the film is a meditation on a life lived differently; a radical life choice taken by the monks and nuns who are his students. These are often young people, including Westerners, who have decided to give up material possessions, relationships and ordinary jobs to become ordained monastics.

CT: Tell us how you came to be involved and how your brother’s conversion to Buddhism affected you.

MP: I got involved through my brother, otherwise I would probably never have found out about Thich Nhat Hanh, this community and this practice. When my brother was ordained in 2008 it was an eye-opening experience for me, and I immediately had the idea of telling his story as a fiction film. However, it then seemed obvious that it would harm his practice after his ordination if I effectively publicised his story so much, and so I let go of the idea until the community came to me in 2011 and suggested I make a documentary about the lives of the monastics, especially their US teaching tour later that year. It was pitched to me as ‘like a rock band movie, but without the sex and drugs’ – which appealed to my love of quirky documentary subjects. At that point I asked one of my closest friends and fellow filmmaker Marc J Francis to come on board as a producer, and we quickly ended up sharing the producing and directing roles.

I was very moved by what I thought was a very brave life-choice by my brother. I never thought of it as a conversion, rather a radical step towards a deeply philosophical path according to a set of strong values which include service to others above all – which is what Thich Nhat Hanh’s ‘engaged’ Buddhism is about.

CT: Tell us about the amazing locations we see in the film.

MP: The early parts of the film are shot near Bergerac in South-West France. We start in the depths of winter and the film slowly gathers pace, warmth of colour and becomes noisier as we move through spring into summer and many hundreds of retreatants – ordinary people like you and I – arrive to join a week-long or longer retreat with the monks and nuns. In the late summer the monastics take off to the US and we cross the continent from upstate New York, to Manhattan, to deepest Mississippi before ending in California near San Diego. 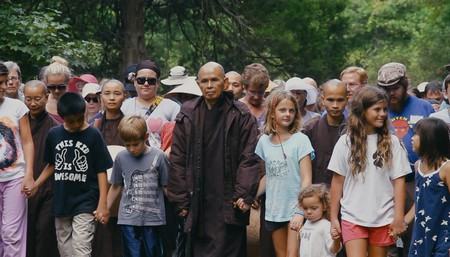 CT: What did you learn about Mindfulness whilst making this film?

MP: I think both Marc and I were very touched to be in the company of such peaceful people who knew to take time to enjoy even ordinary domestic tasks such as washing dishes and drinking a cup of tea. They would also prioritise things which seem so far from everyone’s daily reality these days – especially us digitally-connected urbanites – such as walking in the woods or looking at a beautiful sunrise. Speaking from personal experience, I couldn’t help but become more peaceful and mindful in their presence, and much of that has stayed with me since. They say that an expanded mind never returns to its former size, and in many ways I feel the same about my exposure to mindfulness and meditation.

CT: Mindfulness is a phrase that is becoming increasingly popular. What are the common misconceptions around it?

MP: Mindfulness has become very fashionable as a stress reduction technique and as a way to increase happiness in the workplace, but I have to say that when mindfulness is used in the Pentagon as a training tool for soldiers in the US military or offered to executives in corporations known for their ruthlessness and destructive impact on the world, I sometimes wonder whether some people have strayed too far from the origins of the practice, rooted as they are in love and compassion.

CT: What do you think people will take away from the movie?

MP: I hope that people go away feeling that they have been on an extraordinary journey with people who are very good at touching happiness. I would like people to enjoy the immersive qualities of the film so that they touch the experience of a monastic way of life, even if they fundamentally don’t like it, or can’t identify with that path – because it really is not for everybody. 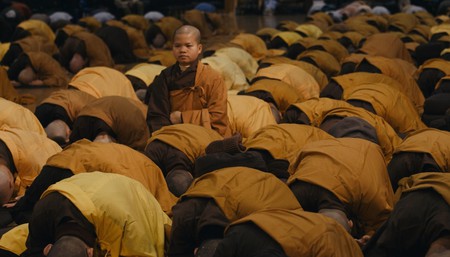 CT: What was the hardest part about filming this project?

MP: Monastic life is quite private and was hitherto closed to cameras, so gaining the access that allowed us to tell this story was a slow process. Beyond that, Thich Nhat Hanh did not want the film to be about him, and the monastics shun ‘stardom’, so we had to work hard to try and find a way of making a film with no traditional story ‘arc’ in which an identifiable character goes on a journey of change or self-discovery. One of the challenges of this project was making a film based on a sequence of ‘present moments’ delivered in a visceral way which makes you feel like you are sharing them as the audience.

CT: Why did it take three years to make the movie?

MP: Shooting was long for the reasons around access, and the edit was longer than usual because of the experimentation; the trial and error that was needed to find the right visual language to tell this story.

CT: Tell us how you got Benedict Cumberbatch involved in the project?

MP: We had heard that Benedict was interested in meditation and mindfulness as a result of his work on Doctor Strange. When we approached him it turned out that he had read some of Thich Nhat Hanh’s books, had been immensely moved by the beauty and simplicity of his teachings and so was extremely keen to get involved. 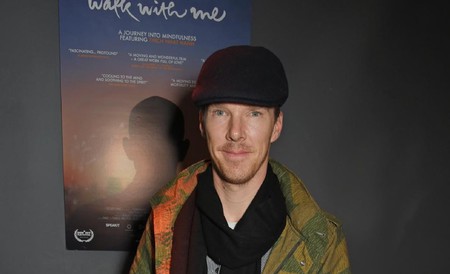 CT: What’s been the reaction to the film so far?

MP: Marc and I have been bowled over by audience reactions all over the world since we opened in the US in early August 2017. Some early audiences were largely made up of followers of Thich Nhat Hanh or people who had experienced retreats with his monastics, but gradually word of mouth spread news of the film beyond this group, and we are often approached by people in the audience who have had no experience of this sort of practice and who talk to us about what they have seen in the film as life-changing stuff. I’ll never forget one older man in the US who got up at the end of a question and answer session with Marc and I and said, crying, that this film had woken up things in him that had been asleep for decades.

Walk With Me is in cinemas now