Anish Kapoor is one of the most influential artists in the modern art world. Breaking boundaries at the Versailles Gardens and knocking down the doors at the Salle du Jeu de Paume, he is causing a stir in the serene suburb of Paris. What’s been dubbed as the “Queen’s Vagina,” his controversial Dirty Corner is making headlines again after falling victim to vandalism for the second time this summer. 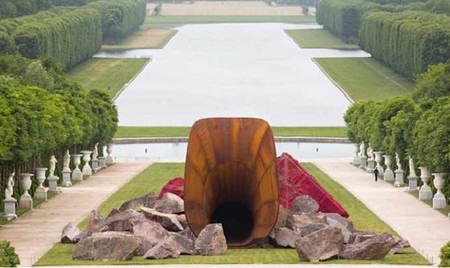 Upon arriving to the gardens of Versailles and casting your eye over the horizon, it is impossible not to be in awe of the decadence and symmetry stretching out as far as the eye can see. Admiring the splendor of the vast greenery, statues and fountains, your bubble is suddenly burst by havoc wreaking from the center of the tapis vert. Taking a look closer at the grand cluster of rock, earth and metal, surely this cannot be your everyday grotto adorned with rock paintings, but rather, a representation of the vagina of the queen coming into power, ready to indulge in the extravagance of the royal land.

Family jewels or not, the controversial piece has been a highlight in the media since day one. Created by London-based artist, Anish Kapoor, the Dirty Corner is one of six of his installations being exhibited in Versailles until November. The enormous metal tube is the new focal point when entering the royal gardens, causing a stir over its sexual theme. But Kapoor says his intention was merely to create a juxtaposition between his work and that of André Le Notre, the gardener to the royal family, who meticulously aligned the gardens east to west to follow the sun’s path for the almighty Sun King himself, Louis XIV. Perfection is emphasized in the layout of Versailles while Kapoor’s work is causing chaos. What he truly wishes to highlight here is that nature isn’t perfect and over time there will be decay and corrosion. 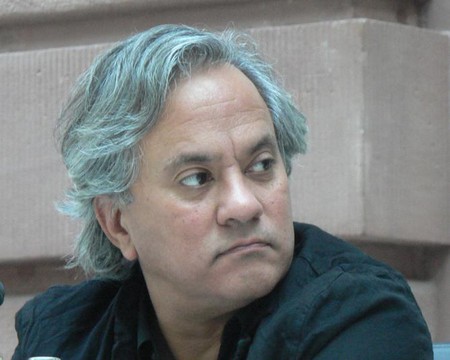 Kapoor, who is of Jewish origin, was born in 1954 in Bombay, India. He moved to London in the early 1970s to study at the prestigious Hornsey College of Art before enrolling in the Chelsea School of Art and Design. He became known on the international art scene in the 1980s for his colossal works, public sculptures and intense colors which reflect both his Eastern and Western roots. Representing Britain at the Venice Biennale in 1990, having permanent public sculptures such as Cloud Gate at Chicago’s Millennium Park and Arcelor Mittal Orbit at London Olympic Park and receiving a knighthood for services to visual arts, it is no wonder that Anish Kapoor is a force to be reckoned with worldwide.

As if his controversial piece hadn’t already been making headlines across the globe for its provocative nature last week, the Dirty Corner was brought back into the spotlight after being vandalized with anti-Semitic graffiti. And, it’s not the first time the “Queen’s Vagina” has been targeted. In June, it looked to have been made the bull’s eye for a game of paintball, when it was splattered with bright yellow blows which were quickly cleaned up. However, this time the battle wounds are here to stay. 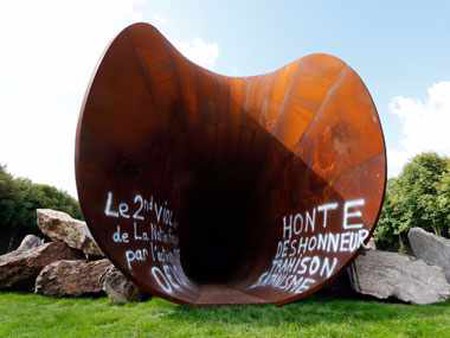 Sprawled out in white paint, phrases of hatred have defiled the 200 foot-long sculpture giving new meaning to the name Dirty Corner. What originally was created to make onlookers think lightheartedly has now been tainted by racism and intolerance. France, where freedom of speech and religion are so important, has now been reminded how hateful people can be, particularly in regards to religion, politics and the general human race. Not only was this an attack on the artwork, but on France as a whole. The decision has been made to leave his work as is, as Kapoor says to French newspaper Le Figaro: “From now on, in the name of our universal principles, these abominable words will become part of my work, they will overlay it and stigmatize it.”

His works will be on display in the Gardens of Versailles and at the Salle du Jeu de Paume until November 1st, 2015.