11 Reasons Why Foodies Will Fall in Love With Brittany 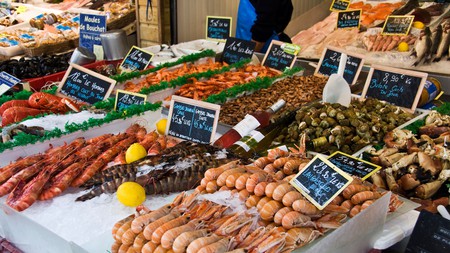 With a full third of the country’s coastline, Brittany produces France’s finest seafood, as well as exceptional drinks and dishes. So with local specialities like crêpes, salted butter, apple cider and cult pastry kouign-amann, there’s plenty to feast on. Here’s what to eat and drink next time you’re in the region.

Oysters have been farmed since Roman times in Cancale across the bay from Mont-Saint-Michel; today, these vast beds produce the majority of France’s flat huîtres. They’re served fresh as a breath of sea air from the little port-side market in the charming town of Cancale. Sit on the stone seawall and slurp them up with a sweeping view over boats bobbing on the bay. 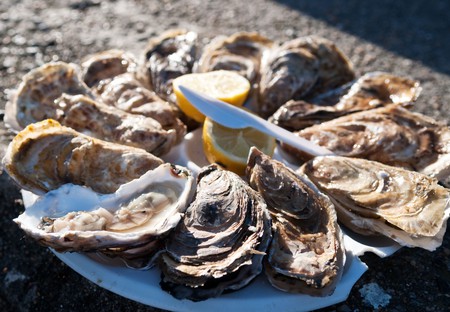 Oysters with lemon are a speciality in Cancale, France | © Yulia Kuznetsova / Alamy

Brittany’s 2,800 kilometres of intricate coastline and its islands, cliffs and inlets is perfectly suited for seafood trade. Finistère langoustines are perhaps the pride of the catch, sometimes called Demoiselles de Loctudy or Guilvinec after two of the premier fishing ports. Scallops are from Saint-Quay-Portrieux and Erquy, a protected natural reserve. And at Plouguerneau you can pick up a homard bleu or Breton lobster, with its gorgeous deep-blue shell, directly from the boat. 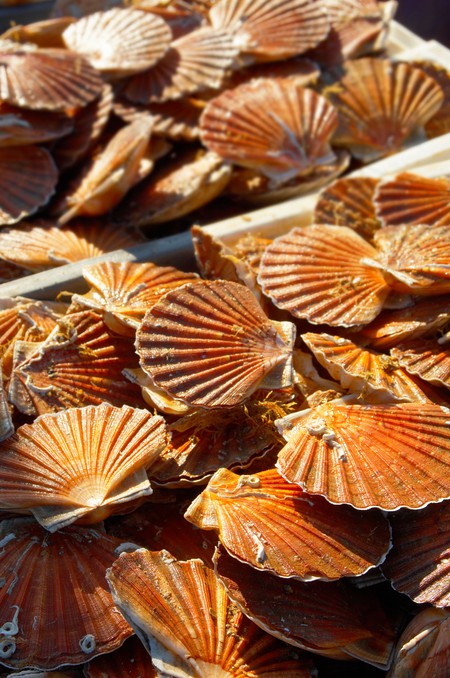 A little further south is the humble roadside shack where Jean-Luc Tonneau shares the bounty of his catch: Cancale oysters and the celebrated local bouchot mussels – small, sweet and sea-fresh. This is high-quality no-frills dining: pop out to the carpark for some french fries, order a cold bottle of white wine and tuck in, overlooking the water where your lunch was raised. 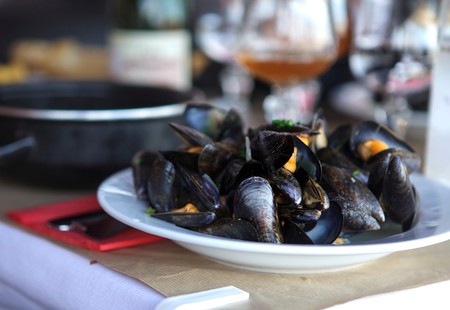 Salad from the sea

People have been gathering algae along the Finistère coast for centuries. You’ll find local dishes with a seaweed twist, like Molène’s famous seaweed-smoked sausages, or pain aux algues – bread with a touch of ocean green. In Roscoff, you can visit the new-wave seaweed gatherers at Algoplus – take a guided tour and browse their range of preserved sea vegetables, seaweed mustard and algae-infused beauty products. 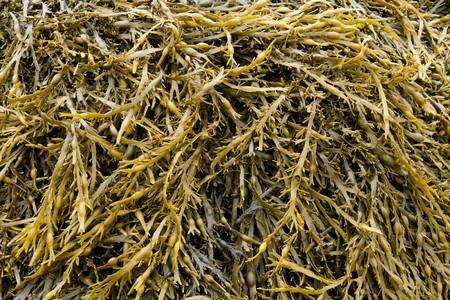 Jean-Yves Bordier established a fromagerie (cheesemongers) in the middle of Saint-Malo’s magnificent walled old town in 1985, and went on to rediscover the bygone craft of butter-making. Bordier butter is hand-shaped with little wooden paddles, and sometimes flavoured with smoked salt, seaweed or fennel. They’re all available at his shop La Maison du Beurre Bordier, and take centre stage on the butter-themed menu at the adjoining Le Bistro Autour du Beurre. 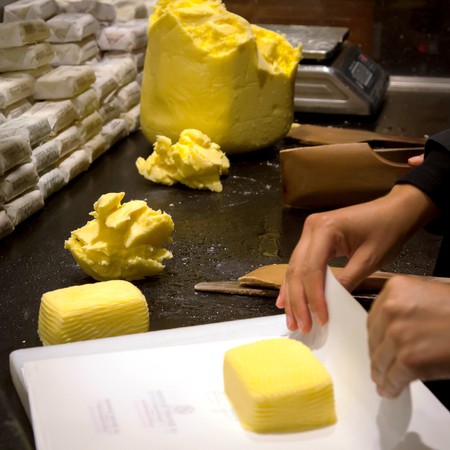 They’re Brittany’s most famous export but what are they actually called? In Lower Brittany, made with wheat flour or buckwheat, they’re crêpes; in Upper Brittany, the savoury buckwheat version is called a galette. Beyond that, anything goes. Fine dine on them at a crêperie gourmande (a locally certified crêpe haven) or eat them one-handed on the move. Or even better, learn to make them yourself at the Atelier de la Crêpe. 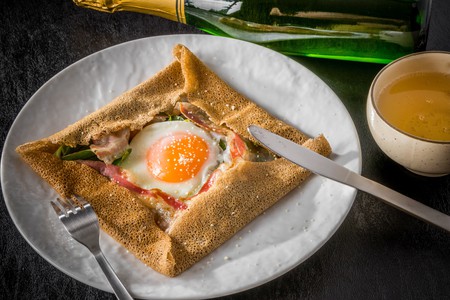 Buckwheat flour galettes are a signature in Brittany | © norikko/Shutterstock

Soft butter caramels had been around for a while when Henri Le Roux – already an accomplished pastry chef and chocolate maker – introduced the salted butter caramel (caramel au beurre salé) at his new chocolaterie in the mid-1970s. Maybe it was the crushed nuts that he added, but his version made these moreish candies world famous. They’re Brittany’s favourite edible souvenir, available everywhere, including Maison Le Roux boutique in Quiberon. 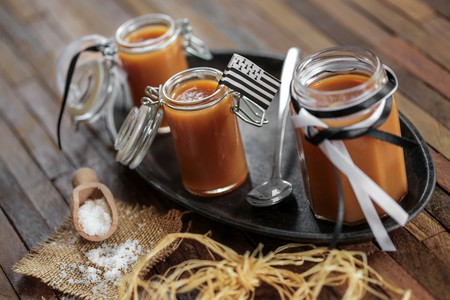 “The fattiest pastry in all of Europe”

Brittany’s beloved kouign-amann is a sweet-lover’s dream and a nutritionist’s nightmare – hence the descriptor coined by The New York Times. Invented in 1860 in Douarnenez, Finistère, the pastry is traditionally made with 40 per cent dough, 30 per cent salted butter and 30 per cent sugar, folded together and baked until the dough puffs and the sugar caramelises. It results in a melt-in-the-mouth texture in the middle with a brittle crunchy outside, like a croissant that’s taken a sugar bath. 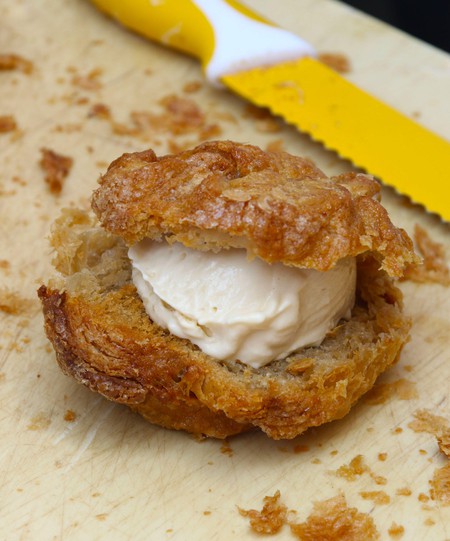 It’s actually cider, but its delicate flavour has earned it the coveted Label Rouge – an assurance of superior quality. Guillevic apples, grown on the Rhuys Peninsula on the stunning Gulf of Morbihan, express the terroir of the region, like a fine wine. Visit Cidrerie Nicol in Surzur cider country to taste it, and discover how it’s made at their cider museum in Le Hézo, a 15-minute drive away. 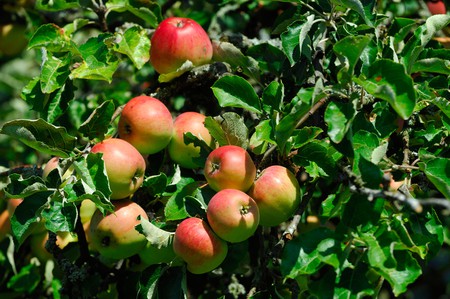 Brittany’s devotion to the apple spans the full range of alcohol strengths: Lambig (Brittany’s answer to Normandy’s Calvados) sits on top and pommeau (a mixture of Lambig and fresh apple juice) has a happy middle ground. Some of the best are made at Distillerie du Gorvello. Visit for a tasting tour of the farm, and see how the premium tipples are made. 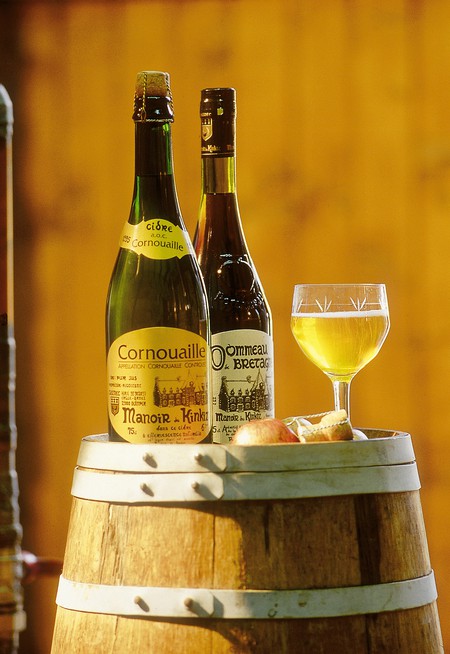 When life gives you apples – as it has in Brittany – you make cider. With over 600 varieties, some of the region’s best come from around Quimper, an area granted an Appellation d’Origine Controllé certification in 1996, Brittany’s first cider AOC. Drive the scenic Cornouaille Cider Route – a 40km (25mi) cider trail – to meet producers and sample their fine semi-dry ciders, traditionally drunk from small bowls. 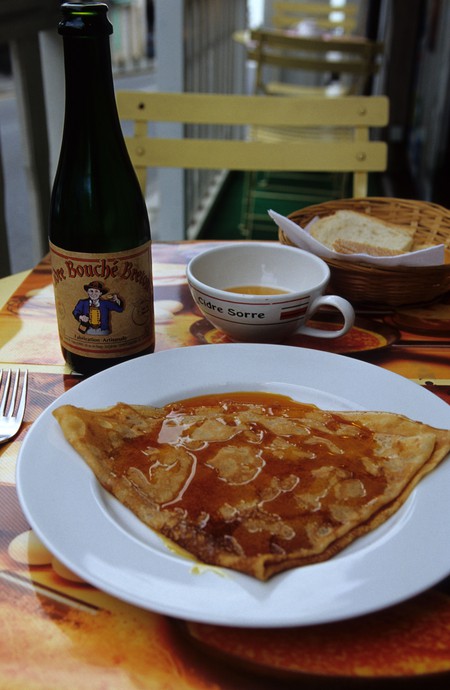 Otherwise, you’ll want to get a taste of the legendary Breton beer, which was all the rage in the 1800s. This regional speciality has enjoyed a revival over the last few decades with the arrival of a new wave of top-quality breweries. Crafting inventive brews steeped in the area’s Celtic roots, the breweries serve up plenty of varieties to work your way through. For a potted history, pay a visit to Brasserie Lancelot for tours and tastings. Its beers, named after famous figures in history, are a big hit with locals.

Foodies are bound to fall in love with Brittany. To find out more about Brittany’s gastronomy and specialties, visit brittanytourism.com.