Water jousting (called joutes nautiques in French) is just like horse jousting but played on boats and has been a national pastime for many residents in the South of France for centuries. One of the only countries offering the sport, huge crowds turn out to watch jousters trying to knock each other off of boats while listening to medieval ditties and brass bands during the summer months. 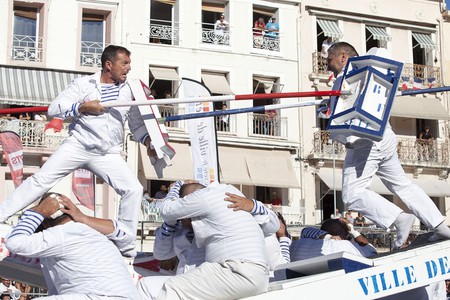 Water jousting can be traced back to ancient Egypt (to 2300 BC) but it arrived in France possibly as early as 570 BC and spread throughout. Since the Middle Ages, French kings and queens were entertained with water jousting competitions particularly along the Saône River in Lyon. Even England’s Queen Elizabeth I is said to have been received at Sandwich with a water jousting spectacle to watch. It was so popular at local festivals that many arenas were flooded so that everyone could watch the competitions from the stands and have a good view.

The sport hasn’t changed much since its medieval popularity

The sport’s rule remains similar to the past’s. The teams always wear blue and red—blue for the bachelors and red for the married men. Aside from the jouster, 10 oarsmen on each boat are encouraged by an oboist and a drummer who play medieval tunes to keep the rowing rhythm going. Jousters stand about 3 metres (9.8 feet) above the water with a large shield and a 2.7-metre (9-foot) lance while they try to avoid lunges and keep their balance. Jousters knocked into the water are retrieved by men in rowboats who pull out their shields and lances in mock fighting before allowing the jouster in the boat. Jousters are only given one chance per competition.

Sète is a great place to watch water jousting

The Saint-Louis Festival in Sète (between Toulouse and Marseille) is an annual event that has taken place since the port was built in 1666. Men practice in the canal from June to September and for five days during the festival in August, brass bands play, jousters fight, and people line the Canal Royal to watch the fun. It’s a great spectator sport, best done while sipping the local rosé wine. 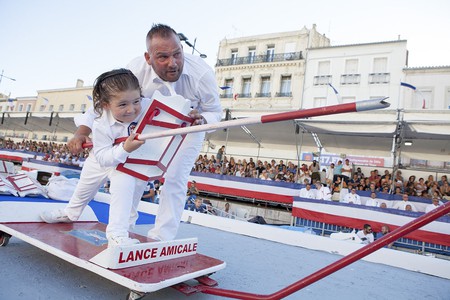 Water jousters can start training from as young as three years of age and communities of jousters often become like family. Young boys start training on land and stand on a plank that is wheeled along. During the Festival, competitors are broken up into age groups (under 21s have their own group) and by weight class. Winners of the heavyweight competitions earn the honour of having their names engraved on a shield which sits in the town’s art museum.