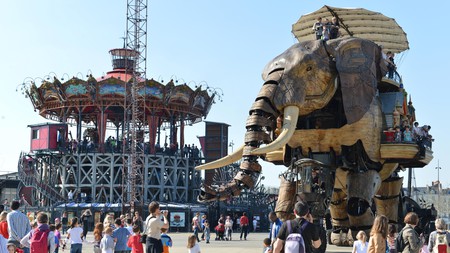 In the late 1980s, Nantes decided to focus on culture to attract visitors. Thirty years later the French city is a place like no other, where art has become a part of everyday life.

Wandering around the streets of Nantes during the city’s annual art festival, Le Voyage à Nantes, is endlessly entertaining: a gigantic mechanical elephant spouts water at you, a square with a traditional fountain has been taken over by 600 garden-centre style statues in fake marble, and buildings and trees are adorned with gigantic birds’ nests.

It all started in 1987 when the shipyard, which had been at the core of the city since the 18th century, closed down. How do you save a city when its industry leaves? Nantes chose a surprising solution: fill the city with art to transform it into a creative cultural destination. Today, both the picturesque city centre and the former industrial shipyard are filled with clever artworks to inspire and engage you to view your surroundings from a new perspective.

The man behind these inventive installations is Jean Blaise, the general manager of Le Voyage à Nantes, which launched its annual summer art festival in 2012. Blaise has been based in Nantes since the ’80s, and remembers the city’s shift in direction. “When the shipyard closed down, the city was very gloomy. But there was an idea that culture could be used to change its identity, and since nobody was really looking at Nantes in the ’90s, the city was free to create events, like the light carnival Festival des Allumées and street performances by theatre company Royal de Luxe. The rest of France and Europe started looking to Nantes as an avant garde city.” 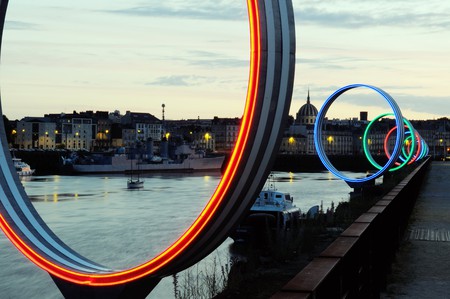 ‘Les Anneaux’, by Daniel Buren and Patrick Bouchain represents the link between the city’s heritage and the here and now | © Bernard Renoux/Le Voyage à Nantes

Reflecting the spirit of the city in art

Every summer, Le Voyage festival commissions artists, architects and designers to create new works for the city. On Place du Bouffay, where the first castle in the county of Nantes stood in the 10th century, Philippe Ramette’s Éloge du pas de côte (Ode to sidestepping) has pride of place. The sculpture shows a suited gentleman in mid step off the plinth, capturing a moment of transition into the unknown. It’s a fitting symbol for Nantes, a city that embraced a new path outside of its comfort zone. “Usually you’d have a statue of a general or a politician in the main square. That we were able to keep this sculpture there was a victory; it shows that Nantes is a bit different and says something about the spirit of the city,” Blaise says. The statue is one of the works the city has kept on permanent display. A few of the installations from the summer usually remain, though the city has to take things like upkeep into consideration. 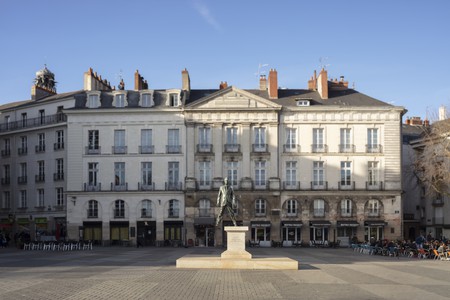 The artworks don’t have to be big; one of the things that makes Nantes so fun to visit is that there’s a dash of creativity wherever you look. Eye-catching shop signs, which often work as visual puns, stay up after the festival finishes. You might see an oversized ice cream cone filled with hair, a gigantic rubber duck or a moving wooden mechanical doll decorate the facades above shops. But there are some notable prerequisites: “What’s important is that the artists valorise the city. There are different spaces and monuments that we might want to show off, and we look for artists that can reveal them,” says Blaise. One of the latest is the remains of a tall 15th-century chimney that artist Flora Moscovici painted with bright pastel colours, which cast the old architecture in a new light, offering passers-by the chance to view the past through a modern lens. 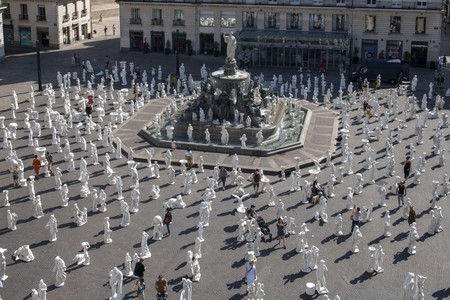 Revealing the past, while looking to the future

Through the city’s artistic commissions, Nantes has managed to honour its history in inventive ways that speak to visitors in the present day, and create a sustainable cultural plan for the future. As well as the shipyard, Nantes is known for being the birthplace of 19th-century science-fiction writer Jules Verne, and his legacy lives on at the Île de Nantes, where company Les Machines de l’île have created humungous mechanical animals that bring the author’s fictional worlds to life. You can take a trip around the island on the back of the towering elephant, or ride a sea creature on the Marine Worlds Carousel. Further from the city centre, in the Loire estuary, more large-scale sculptures are dotted along the riverbanks; a sunken house, a giant sea snake, a boat leaping from the quay into the water. 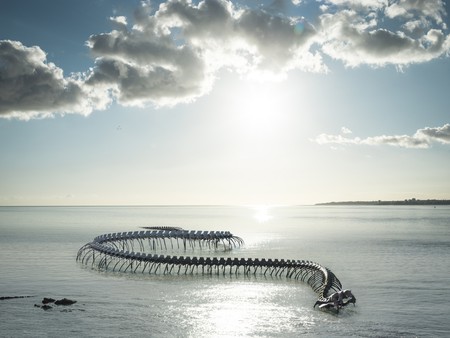 The scale of Le Voyage à Nantes is immense, and it’s had a huge impact on the city. “July and August are now the strongest months for our hotel industry. We had 670,000 visitors in July and August 2018. Before Le Voyage they were the weakest months; the city was dead, everything was closed,” Blaise says. There has been a radical change in the number of restaurants and hotels in Nantes over the past 10 years as visitor numbers have increased, but the city is also attracting more permanent residents and is now France’s third city in terms of population growth. “8000 – 9000 people move here every year. People come from Paris, companies move here. The image of Nantes has changed and people see that as a positive thing,” Blaise concludes. After so many years of the festival, there is now an art trail in town that you can follow all year round – a permanent voyage, and a reminder of how Nantes went from being just another post-industrial city to become a truly unique creative space. 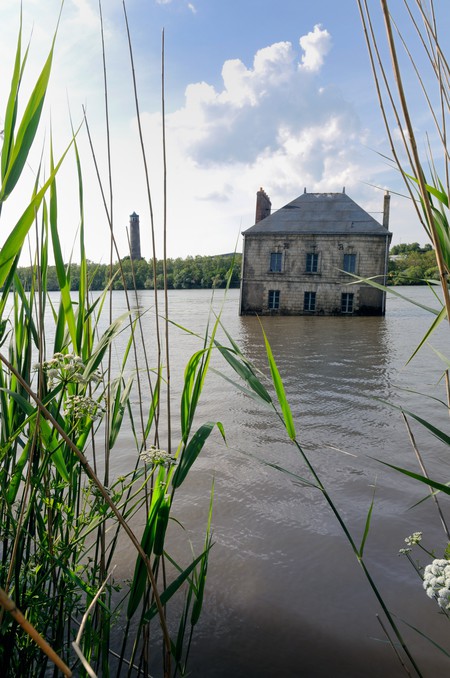