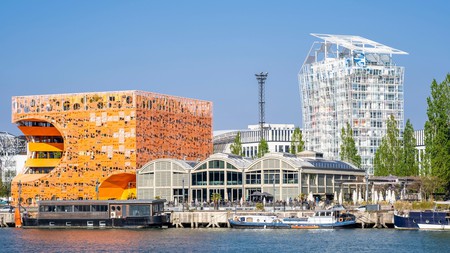 Lyon is home to a plethora of architectural marvels, ranging from Roman ruins to innovative museums. Explore the city’s most breathtaking architecture under the guidance of local award-winning architect and architecture tour guide David Sumner.

To act as Culture Trip’s guide, David Sumner – formerly a professor of architecture in both New York and Lyon – is the architect behind the first building of the famous Confluence Urban Project. David has also won three French National Architecture Awards for his work with Xanadu Architectes of Lyon. Now, he runs art and architecture tours with Artchitectours and knows the city’s architecture like the back of his hand. Here are his top picks.

Ruins, Theater
Facebook
Email
Twitter
Pinterest
Copy link
Share
Map View
“High up on the Fourvière hilltop, looking down upon the Renaissance quarter of Lyon, is the 10,500-seat Roman amphitheatre,” says David. It’s one of the most significant sites of what once was the ancient Roman city of Lugdunum, today Lyon. “The site was founded by Julius Caesar, and Lugdunum was a vibrant city of 60,000 inhabitants,” he says. At the centre of where the city stood, today you’ll find the amphitheatre, inaugurated by Emperor Augustus in 15 BCE. “It is the oldest Roman amphitheatre in France,” he says. “The adjacent Roman Odeon Theatre was constructed during the second century. In excellent condition, the amphitheatre is still used today for an annual summer music festival.”
Open In Google Maps
Rue de l'Antiquaille, Lyon, Auvergne-Rhône-Alpes, 69005, France
+33472384930
Visit Website
Give us feedback

“Opening upon the Roman amphitheatre is the magnificently conceived Gallo-Roman Museum,” says David. It was designed by Bernard Zehrfuss in 1975, who was one of the architects of the famous Centre of New Industries and Technologies in La Défense, Paris. “The elaborate, bridge-like structure creates the ambience of an underground cathedral, with its flying buttresses holding back the hill,” he says. “The monumental spiral entrance staircase and continuous system of ramps guide the visitor through the rich collection from the ancient Roman city.” After visiting the museum, be sure to take in the panoramic views of Lyon from Fourvière Square. “It enables you to envision the immense harmony of the city, and see why Lyon was selected in 1998 to be a World Heritage site by UNESCO,” he says.

“It’s an oasis in the centre of the city,” says David, describing Lyon’s famed art museum. “It forms the south facade of the Place des Terreaux, the second largest and most important square of Lyon.” The serene museum is perfectly juxtaposed with this bustling heart of the city. In regards to its history, “The Palace was constructed by order of Louis XIV to be at its origin a royal abbey, but the exquisite courtyard inside resembles more one of an Italian palace than of an abbey. The hushing silence, lavish greenery and dribbling fountain found in the courtyard render it an urban oasis,” he says. The palace, along with both courtyards, makes up the Museum of Fine Arts of Lyon, or the Musee des Beaux-Arts. “It is the second most important museum in France, second only to the Louvre,” he says. In 1998, the museum’s “brilliant and tasteful renovations by the famous architect and interior designer Jean-Michel Wilmotte” were completed. Now, the museum’s restaurant opens onto a terrace with “a commanding view of the courtyard. You will be astounded by the immense ancient dining hall of the ancient royal abbey.” Be sure to stop into the chapel of the abbey; also converted by Wilmotte, the sculpture hall is home to five sculptures by artist Auguste Rodin. Note that the entrance to the chapel and the dining hall is free to guests.

“The new Grand Hôtel-Dieu is a city within a city,” says David. For eight centuries, the building was the Charity Hospital of Lyon, while today’s structure was designed at the beginning of the 18th century by Jacques-Germain Soufflot. “He would later be called to Paris to design the Panthéon. His sublime architecture always culminates in a central dome, which spirals above the stunning monumental composition,” he says. “During four years of archaeological studies and renovation, the Hôtel-Dieu was the largest private reconversion project of a historical monument in France and the largest private rehabilitation project in Europe.” The Grand Hôtel-Dieu, newly baptized, opened in 2017, with seven pedestrian entrances. “Covering 2.2ha [five acres] of the city’s centre, the 42,000sq m [452,084sq ft] of rehabilitation and 10,000sq m [107,639sq ft] of new construction in the centre of the city has become a new dynamic quarter of Lyon,” says David. “The four arcaded courtyards and gardens have become an urban promenade, where the visitors can walk around its 18,000sq m [193,750sq ft] of shops and restaurants, the international gastronomy centre, the five-star, 430-room hotel, the convention centre, as well as its ancient chapel.”

“This is a meeting of two rivers,” says David. The docks are right by the innovative housing area that falls on the canal of the Confluence Urban Project. It’s home to “houseboats, picturesque cliffs and prestigious office headquarter buildings designed by famous architects such as Rudy Ricciotti, Jakob + MacFarlane and Odile Decq.” A mere glance around the neighbourhood will behold buildings by some of the biggest names in modern French architecture. “Be sure to pass under the monumental glass and steel cantilever of the astounding GL Events Headquarters by Odile Decq,” he says, talking about the radical Gothic building by the famed architect that kickstarted the idea of “confluence” architecture. Decq’s plan was to design an institute where architects, critics, artists, thinkers, philosophers, filmmakers, scientists, engineers and manufacturers could all discuss ideas. Keep an eye out for the Orange Cube and the Euronews Headquarters by Jakob + MacFarlane, shopping centre Pôle de Commerces et de Loisirs Confluence, and the various cubist housing projects along the way. Afterwards, cross the bridge, and you’ll find yourself at the tip of the Confluence peninsula, on the banks of the Rhône and Saône Rivers where a collection of modernist buildings line the banks.

Museum
Facebook
Email
Twitter
Pinterest
Copy link
Share
Map View
Once you walk through Lyon’s docks, “you will discover the spectacular Confluence Museum hovering above you like a giant spaceship,” says David. The spectacular contemporary museum explores the confluence of scientific, technical and societal knowledge, encompassing topics like earth science, humanity, history and geography. “Advancing underneath the entrance and around the spaceship – the building seemingly defies gravity. Be sure to take some time to take a close look at the crystal glass entrance,” he says.
Open In Google Maps
86 Quai Perrache, Lyon, Auvergne-Rhône-Alpes, 69002, France
+33428381212
Visit Website
Give us feedback
Give us feedback