Louise Bourgeois | The Artist Who Brought Sexuality to the Public Eye

Louise Bourgeois claimed to be named after Louise Michel (1830 – 1905), the ‘red virgin of Montmartre’ from the days of the French Commune who was infamously known for her anarchist feminist politics. Such a bold allusion secures Louise Bourgeois’ status as one of the most eminent and provocative artists of all time. A second-generation surrealist, Bourgeois’ psychologically nuanced and often nightmarishly aggressive sculptures manipulated gendered metaphors before ‘Feminism’ took hold in either France or America (she had dual nationality), inspiring generations of future female artists for whom she set a precedent. 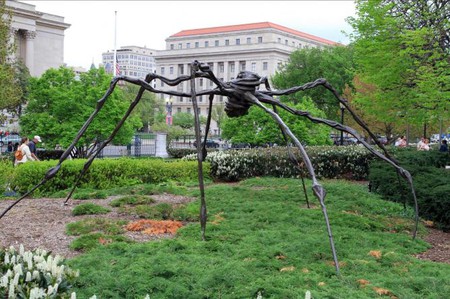 Bourgeois, nicknamed the ‘Spiderwoman’, quickly became notorious in the artistic sphere for her feminine structures and imposing metallic spiders, which she said represented her mother. Bourgeois, whose work has been displayed around the world was one of the first to display psychologically charged and intimate art works. Although Bourgeois is often grouped with the abstract expressionist artists, her works were far from abstract but, rather, were instilled with symbolism. From her artistic sketches in the 1940s right through to her death in 2010, she breathed life into both structure and texture in order to express themes of loneliness, vulnerability and pain.

Her largest, and most famous, sculpture, named Maman (1999) – the affectionate French term for ‘mother’ – popped up in various locations around the world, causing controversy and admiration wherever it appeared. Looming at over 30ft, it even had a spell on the banks of the River Thames outside the Tate Modern, London in 2000 before taking up residence outside Guggenheim Bilbao Museoa. The sculpture was divisive in its amalgamation of the terror usually associated with arachnids and the maternal associations Bourgeois focused on. Maman, as her magnum opus, was perhaps a culmination of the theme of the arachnid that Bourgeois had first contemplated in a small ink and charcoal drawing in 1947, continuing with her 1996 sculpture Spider. The sculpture, with its seventeen marble eggs in a meshed sac hanging from the under-body cavity of the giant structure, is emotionally aggressive and alludes to Bourgeois’ mother with its metaphors of spinning, weaving and protection. Talking to the Tate, she explained: 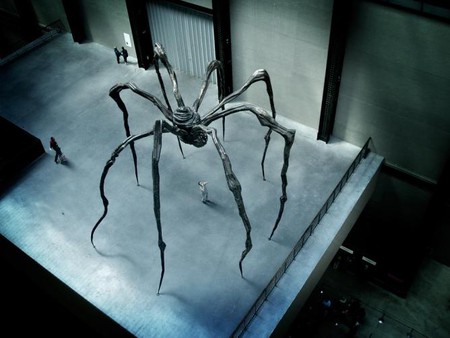 The prevalent theme of protection often translated into images of shelter or home, as Bourgeois blended artistic mediums with her personal conflicts and traumas. In her series Cells (1990s), installations of old doors, windows, steel fencing and found objects were meant to be evocations of her childhood, which she claimed as the psychic source of her art. She spoke publicly and freely of her early, emotionally conflicted family life: her practical and affectionate mother, who contracted influenza when Bourgeois was young; her father’s domineering disposition and his marital infidelities; her childhood, which, as she infamously stated, ‘never lost its magic, never lost its mystery, and never lost its drama.’ The emotional investment in her work was certainly unique and groundbreaking within the art industry. Drawing on her years of psychoanalysis, Bourgeois played with art and reality with daring. Among others, contemporary art therapists and their patients owe much to Bourgeois’ pioneering work. 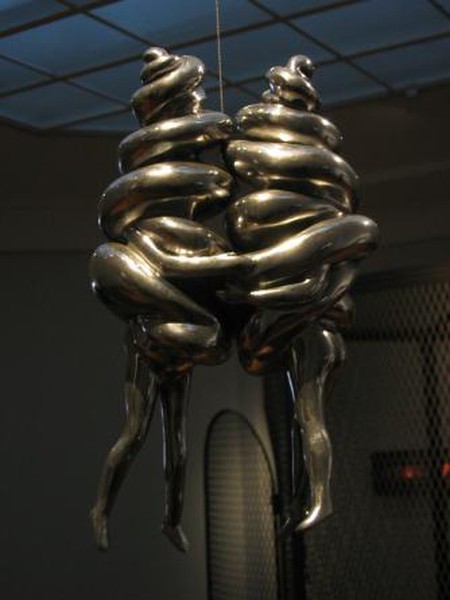 One strand of Bourgeois’ work is that of childhood distress and hidden emotion – a topic which the artist spoke about uninhibited. After Bourgeois’ mother became sick with influenza, her father began having affairs with other women, most notably with Sadie, Bourgeois’ English tutor. This, she has said, was the beginning of her engagement with the double standards related to gender and sexuality, which was expressed in much of her work. She recalls her father saying ‘I love you’ repeatedly to her mother, despite infidelity.

And indeed, sexuality is unquestionably one of the most important and prominent themes in the work of Louise Bourgeois. Though aggressive, her sculptures tend to blur themes of protection, fragility and insecurity to create deeply symbolic pieces that emphasise the relationship to the unconscious with which she was fascinated. Taking her relationship with her parents and the role sexuality played in her early family life as inspiration, she used art to remake and retell that history. Cell: You Better Grow Up (1993) – part of her Cell series – directly reflects Bourgeois’ childhood trauma and the insecurity that surrounded her because of her unstable family situation. The anthropomorphic, suggestive, and often grotesque shapes that her sculptures assume – the female and male bodies are continually reshaped to be almost unrecognisable, or at least, uncanny – are charged with sexuality and innocence, and the sometimes disturbing interplay between the two. Spiral Woman (1952) combines Bourgeois’ preoccupation with female sexuality and torture. Bubbling, flesh-like rolls seem to suffocate the dangling woman whose flexing leg muscles suggest that she is still alive. Bourgeois’ ability to universalize her interior life into works of rubber, bronze and stone is what made her such an inspiration for future female artists. In an art world where women had been treated as second-class citizens and were discouraged from dealing with overtly sexual subject matter, Bourgeois quickly assumed an emblematic presence with her fearless work. Her sculptures were interpreted as an assertive feminist statement: her career an example of pain made art. 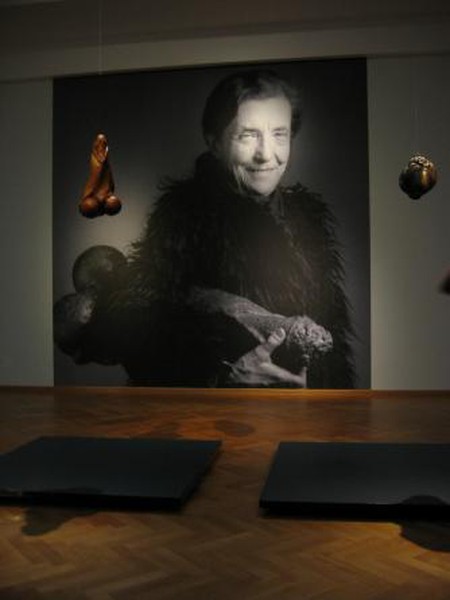 It was her depictions of the body, sensual but repulsive, fragmented, often androgynous, that secured Bourgeois’ status as an unforgettable and unrepeatable talent. Caged cells containing mysterious but deeply relevant items; overtly sexual but worryingly androgynous sculptures in unusual and expressive media; sculptures in latex, wool, stone and bronze – Bourgeois was unafraid to shock. Among her most familiar sculptures was the much-exhibited Nature Study (1984), a headless sphinx with powerful claws and multiple breasts. Perhaps the most provocative was Fillette (1968), disturbingly translated as ‘Young Girl’, this large, detached latex phallus is suggestive and provocative in its interpretation of female sexuality and latent distrust of male figures which perhaps stemmed from her childhood memories of her father’s affairs. Exemplary of these feelings was her nightmarish tableau of 1974, The Destruction of the Father – a psychological exploration of the power of the father. Featuring a table in a womb-like room made suggestively to resemble either a dining room or a bedroom, Destruction of the Father was the first piece in which Bourgeois used soft materials on a large scale. Made of plaster, latex, wood, fabric and dramatically lit with red lights, the installation is designed to look like the aftermath of a crime. The room hosts an arrangement of breast-like bumps, phallic protuberances and other sexually suggestive shapes in soft-looking latex that suggest the sacrifice of an overbearing father. Bourgeois suggested that the tableau’s inspiration arose from a fantasy from childhood in which a pompous father, whose presence deadens the dinner hour night after night, is pulled onto the table by other family members, dismembered and gobbled up. 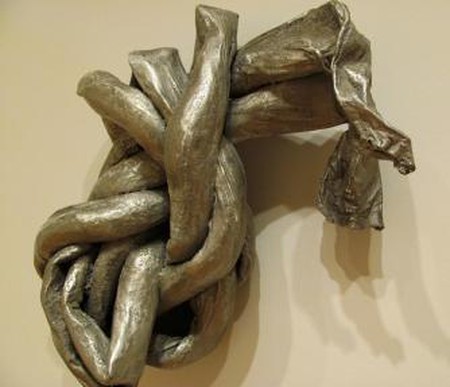 The career of Louise Bourgeois changed the art industry forever, having a profound effect on discussions on psychoanalysis, expression and, most crucially, the place of female artists within a predominantly male-focused industry. From first to last, Bourgeois’ sculptures shared repeated themes which focused on the human body and its need for nurture and protection in a frightening world – one which affected females disproportionately. Held as one of the strongest feminist artists in history, Bourgeois’ work challenged and subverted expectations, causing spectators to pause and think on issues of female sexuality and fragility as the observed her surrealist, emphatic sculptures. Eva Hesse (1936–1970) was drastically influenced by her. As one of the most renowned American artists in the abstract expressionist movement, Hesse channelled Bourgeois’ fearless edge with her experimental exploration with industrial and every-day, or ‘found’ materials, such as rope, string, wire, rubber, and fibreglass. Just as Bourgeois invested much in the choice of textiles in her work, Hesse similarly explored how to suggest a wide range of associations, psychological moods, and what might be called proto-feminist, sexual innuendo with various textures and structures. Living American artist Lynda Benglis (b. 1941) has also openly admitted her debt to Louise Bourgeois. Renowned for her poured latex sculptures, Benglis’ work has caused controversy for its sensuality and physicality, noted for its unusual confrontational messages. In 1968, Benglis smeared Day-Glo paint across gallery floors in a piece called Fallen Painting. During a period of male-dominated minimalist art work, these works disrupted and challenged the artistic norm with vibrant aggressiveness. Unashamed of her feminist message, Benglis stated in an interview in Amelia Jones’s Body Art/Performing the Subject that the piece invoked ‘the depravity of the “fallen” woman’ or, from a feminist perspective, a ‘prone victim of phallic male desire’. During the 1970s, Benglis, collaborating with Robert Morris, produced several videos in which she explored themes of self-representation and female identity – like Bourgeois, she was attracted by the freedom that mediums uncorrupted by male artists could offer. New mediums played an important role in Benglis’ questioning of female identity in relation to art, pop culture, and dominant feminism movements of the 1970s and 80s.