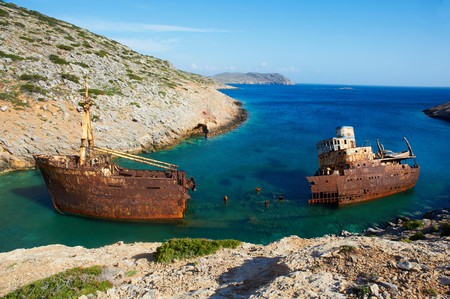 This wreck, off the coast of Amorgos Island in the Cyclades, Greece, featured in Le Grand Bleu (1988) by Luc Besson | © Hemis / Alamy Stock Photo

Vast, unknowable and occasionally deadly, the ocean has been a source of fascination since the time of Homer. It was groundbreaking filmmaker Jacques Cousteau who famously shed light on what lay below the murky depths, but Cousteau was part of a French lineage that spans Jules Verne to the present day.

The Silent World, Jacques Cousteau and Louis Malle’s 1956 classic documentary of undersea exploration, opens with a sequence of disarming beauty. Five divers, clad in nothing more than Speedos, flippers and bright-yellow Aqua-Lungs, plunge into the dark depths of the ocean. The message? These men are facing a new frontier and illuminating a realm previously hidden. The secretive underwater world, for centuries a place of fear and mystery, will be shown in the spotlight of science. 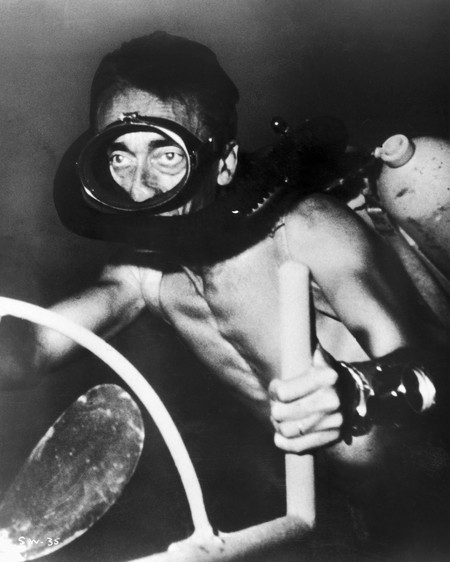 From Moby Dick (1956) to The Odyssey (2016), movie depictions of the ocean have often focused on its unfathomable vastness, where denizens of the depths are glimpsed when they ascend to the surface. French culture is no exception. The 19th-century poet Baudelaire wrote of “the infinite rolling of the waves”. Many great films that post-date Cousteau, including Jean-Luc Godard’s Le Mépris (1967) and Claire Denis’s Beau Travail (1999), play with the infinity and unknowability of the sea. But Cousteau’s documentary broke with this horizontal tradition. The sea became vertical and finite, less a symbol and more somewhere to be charted. 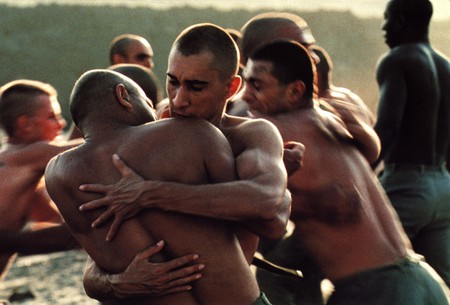 The ocean shared lead billing in The Silent World with Cousteau himself. Known as Le Commandant, a holdover from his military days, he established a formidable screen presence, striding around his ship Calypso in trunks and a turtleneck, smoking a pipe. The world was transfixed: The Silent World became the first documentary to win the Palme d’Or at Cannes that year (1956) – it’s still only one of two, the other being Michael Moore’s Fahrenheit 9/11 in 2004 – and Cousteau was kept busy with everything from archeological digs to the precontinent experiment into the possibilities of an underwater village.

In 1966, American TV producers commissioned a one-off special that would spawn a long-running series, and Cousteau remained a screen presence for much of the rest of his life. Over the next three decades, he (and a small army of less famous collaborators, including his son Jean-Michel) made more than 200 documentaries about the sea and its life. When he died in 1997, he was feted as a filmmaker, adventurer and conservationist. To a generation of viewers across the world, this trim French former soldier had opened up a new world. 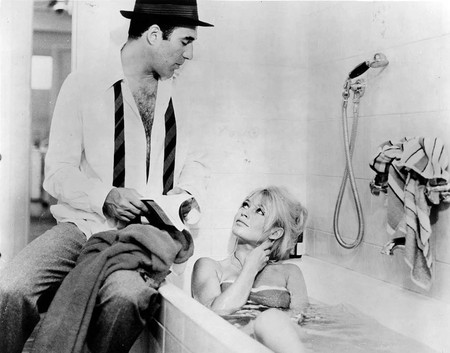 As well as opening up viewers’ visual inventories, Cousteau was also a cinematic innovator in a technological sense. His first short, 18 Metres Deep (1943), was filmed in short bursts due to the lack of apparatus allowing for longer dives. That same year, he co-developed the Aqua-Lung, allowing for more extended trips, and deployed them in his second short Shipwrecks (1943). Much of what we now see as the aesthetic of underwater filming – endless blue space turning to murky depths below, mysterious probers of reefs, divers protected by cages – comes from Cousteau.

Speculation as to what lies under the surface has animated a country that borders both the Mediterranean, centre of the old world, and the Atlantic, gateway to the new. Plongeur (“Diver”), the world’s first mechanically powered submarine, was invented in Rochefort-sur-Mer in 1860. Nine years later, in 20,000 Thousand Leagues Under the Sea, Jules Verne introduced the world to Captain Nemo, a vengeful antihero with a scientific interest in classifying the creatures of the deep. Verne described marine life in raptures; an angelfish, for instance, is “decked out in emerald strips and clothed in velvet and silk, like lords out of Veronese’s paintings”. Verne depicted Nemo’s ship, Nautilus, in great detail, which has often been claimed to anticipate modern submarine vessels. 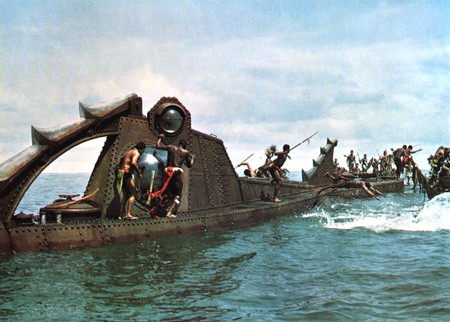 Verne’s influence on the French imagination is far-reaching; even a Paris Métro station, Arts et Métiers, was designed to look like a Vernean submarine. The theorist Roland Barthes compared Verne to the encyclopédistes of the 18th century, in his desire to catalogue and disseminate knowledge, and 20,000 Leagues was an early subject of French cinema courtesy of the fantastical Georges Méliès, who produced a silent parody in 1907. There have been numerous feature-legit adaptations since, most famously the 1954 Hollywood film starring James Mason as Captain Nemo.

Verne’s masterpiece launched a thousand films, but few filmmakers seem so infinitely connected to his novel’s ethos as Cousteau. As a teenager in Paris he had seen Stuart Paton’s silent 1916 version, the first feature film with underwater footage. And Nemo’s dinner-table encomium to the ocean could just as easily be a narrator from a Cousteau’s documentary: “The sea is everything. It covers seven-tenths of the terrestrial globe. Its breath is pure and healthy. It is an immense desert, where man is never lonely, for he feels life stirring on all sides. The sea is only the embodiment of a supernatural and wonderful existence.”

There is a darker side to this obsession. In a late-life interview, Cousteau suggested that the human population needed to be culled in order to project the ocean environment, drawing on controversial Malthusian theories.

Luc Besson’s “cinéma du look” classic, Le Grand Bleu (1988), dramatises the misanthropy that can result from an obsession with the sea. Loosely based on the friendly rivalry between real-life free divers Jacques Mayol, who co-wrote the script, and Enzo Maiorca, who tried to prevent the film from being shown in his native Italy, the movie’s central subject is Mayol’s infatuation with the underwater world, which draws him in like a siren. “The hardest thing is when you hit the bottom,” he explains, “because you have to find a good reason to come back up.” At the film’s conclusion, an injured Mayol forsakes his newly pregnant partner to embark on one final expedition, swimming to an uncertain fate.

After Le Grand Bleu, Besson spent the next few years filming Atlantis (1991), his own documentary on aquatic fauna. Unlike Cousteau’s films, however, Atlantis features no humans and no narration. The depths are allowed to sing for themselves, albeit aided by an ambient soundtrack. People are also a sparse presence in Jacques Perrin’s Océans (2009), another spectacular compilation of oceanic footage. 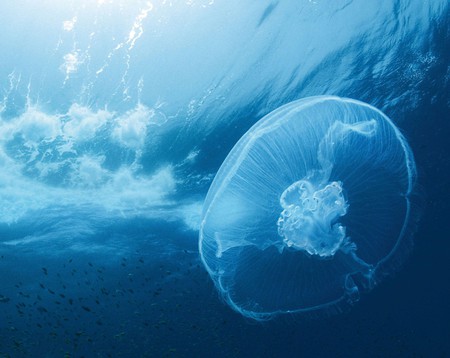 This absence represents a significant shift. Cousteau lived in the waning days of European imperialism. He was carving out a new domain, and his now-uneasy propensity to spear, club and blow up potential samples has something of the colonial about it: the world’s unexplored oceans being discovered by a plucky pioneer, consequences be damned. His successors tend to present the ocean as something to be preserved, and spared from human intervention except when that’s to protect it from other, more rapacious people.

Cousteau’s cinematic influence goes beyond France and into the realm of fiction. In 1953, he was joined on an expedition by Ian Fleming, who incorporated the technology in his next James Bond novel, Live and Let Die; diving later became a staple of the movie series, from Thunderball (1965) onwards. More recently, Wes Anderson’s The Life Aquatic with Steve Zissou (2005) was an elaborately staged tribute to Cousteau disguised as a family drama. Drawing on the aesthetic of Cousteau’s television series, everything from the manner of Bill Murray’s eponymous protagonist to red hats worn by his crew echo the work of Le Commandant. 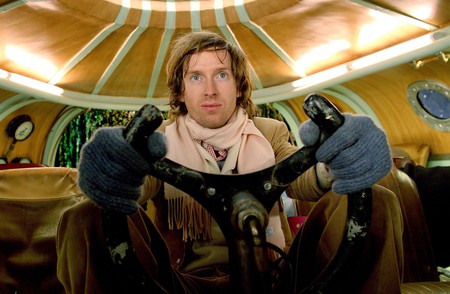 By the time of Anderson’s pastiche, Cousteau’s reputation had taken something of a battering. Revelations about his dubious wartime record, treatment of his children and long-standing second family punctured his heroic image, as did evidence that he undertook corporate suites for environmentally polluting companies including BP. But The Silent World’s sense of discovery remains undiminished today, even when put aside newer technological marvels like Blue Planet II (2019). The intoxicating, sometimes dangerous allure of the undersea world has never quite been captured so well.