JR: 'The Wrinkles of the City' Projects 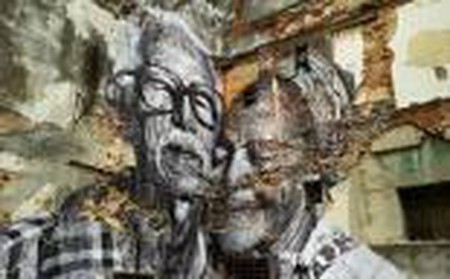 Winner of the prestigious TED Prize in 2011, French urban artist JR has gone from strength to strength in recent years. Beginning his career as a graffiti artist in his teens, JR has long been fascinated in the combination between public art and portraiture, and has engaged in a number of projects that look at the local inhabitants on a grand scale. Perhaps one of the largest scale projects of this sort is JR’s ‘The Wrinkles of the City’ Project, which has taken place in cities around the world. From Cartagena, Spain, in 2008 to Havana, Shanghai, L.A. and most recently Berlin in 2013, this project blows up candid portraits to a truly colossal scale. These projects look at age and the ageing process and, in turn, how it affects the identity of both the people and the city. 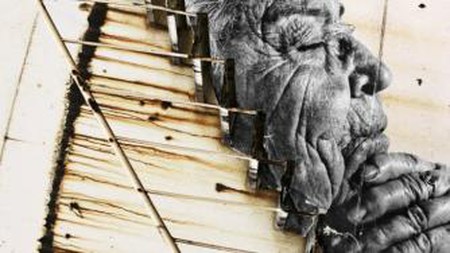 In 2008, JR brought ‘The Wrinkles of the City’ or ‘Los Surcos de la Ciudad’ to Cartagena, a coastal city located in the Murcia region of Spain. A major naval station, Cartagena has a rich and, in some instances, tragic history; during the Spanish Civil War (1936-1939), Cartagena was one of the primary strongholds of the Republican Government. Housing the Spanish Republican Navy, it held out against the forces of General Franco longer than any other city in Spain, and was in fact the last city to surrender. JR’s project looks at some of the oldest members of this community: those who can remember the Civil War and suffered from its chaos. 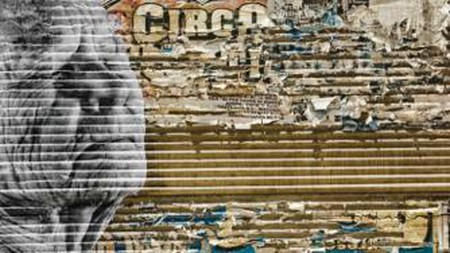 In a country torn apart by a civil war that is still retained in living memory, perhaps the evidence of age is all the more poignant. These are the survivors of the Spanish Civil War, who have known true suffering, witnessed the demise of loved ones, and subsequently struggled through 40 years of a Fascist regime. These aged faces are precious relics of one of the bloodier periods of Spain’s history; their lives have been etched onto their faces, which JR has in turn displayed on crumbling historical facades which too have felt the full effects of war. 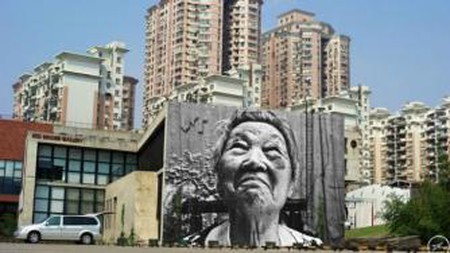 ‘The Wrinkles of the City’ arrived in Shanghai in 2010, providing a unique opportunity to explore the lives and stories of the people featured in the project. The portraits depicting the elderly look at the notion of memory. Shanghai today is the largest city in China with regards to population, and is also in fact the largest city proper by population in the world. Witness to rapid expansion, it is now known as a city of media, technology, consumer culture and a glittering skyline. Yet with regards to culture, it is important that we do not forget the lives and experiences of the elderly amongst the populations. 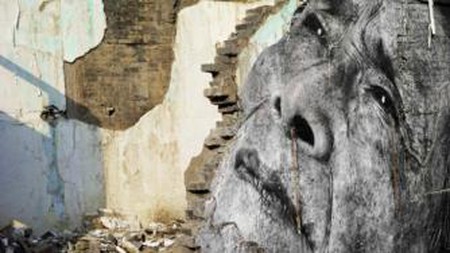 Over the years, Shanghai has seen Japanese occupation, the establishment of the Communist Party, Liberation, World War II, the victory of General Mao and the Cultural Revolution. JR highlights the importance of remembering what the elderly have to pass on to the young. ‘The Wrinkles of the City’ Shanghai is a documentation of change, reminding the fast-paced busy people of Shanghai to remember their history. 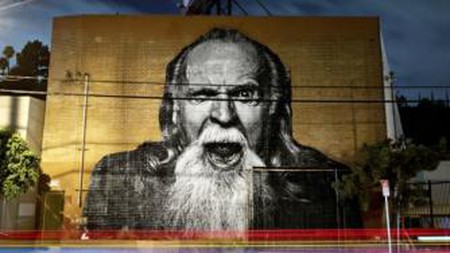 The second largest city in the United States, Los Angeles is, in relative terms, a new city. Arguably there is not a long historical memory to document here, yet in 2011 JR brought ‘The Wrinkles of the City’ to sunny L.A. For the first time, the project’s aim is not to meet and document the witnesses of change, it looks at the more literal meaning of wrinkles, and what they represent. Los Angeles and more specifically Hollywood are home to the birthplace of ‘celebrity’, where beauty and glamour reign supreme. The whole identity of L.A. is based around the superficial notion that ‘beauty is only skin deep’; here plastic surgery is no longer a luxury, but a lifestyle. 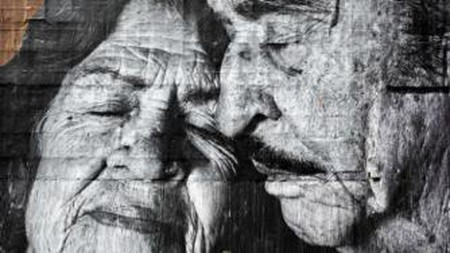 Ageing it seems, is not something that is allowed to happen to the inhabitants of L.A., so for this project JR wished to juxtapose the wrinkles of the elderly living in the city and the marks of their past, with images of perfection and agelessness that we are faced with in the 21st Century. The people who participated in this project take pride in their appearance; to them their wrinkles are a mark of the life that they have led and the experiences that have shaped them. Yet that is not to say that there is scorn for those who opt for surgery to stay young; one participant says ‘…don’t discount the people with the botox…because they’re just survivors too. Trying.’ 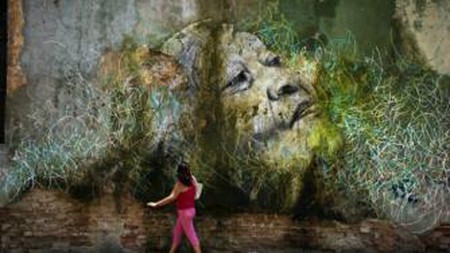 In May 2012, JR took ‘The Wrinkles of the City’ to Havana, for the first time in a collaboration with the Cuban-American artist, José Parlá. For this particular iteration of the project, JR and Parlá photographed and recorded 25 senior citizens of Cuba, who had lived through the Cuban Revolution. These photographs went to create portrait murals, applied to the crumbling facades of Havana, then Parlá, who is of Cuban descent, interlaced the portraits with calligraphic writings and painting. This additionally provides a dialogue between the people and the place; the buildings upon which the images have been pasted have themselves a life and a story to tell. 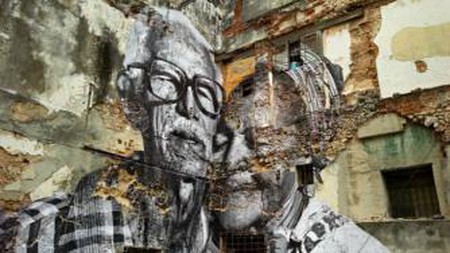 Public art is not uncommon in Cuba, many buildings in the capital, Havana, are adorned with images of the country’s long-standing erstwhile leader, Fidel Castro, as well as the hero of the revolution, Che Guevara. ‘The Wrinkles of the City’, in this instance, was created for the 11th Havana Biennial which ran from 11th May 2012 through 11th June 2012. An apolitical project, ‘The Wrinkles of the City’ allows space for public interpretation; by presenting the aged community of Havana they create an encounter between the observer and the subject, highlighting the humanity of the city, telling the stories of those who live within it. 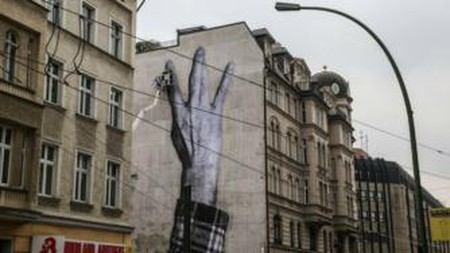 The most recent city to be hit by ‘The Wrinkles of the City’ is Berlin, Germany, where JR finished working on the installations as recently as April 2013. Pasting images on over 15 buildings around Berlin, JR stated in an interview that it was important to depict ‘people with wrinkles, on walls with wrinkles’. Here he is not simply looking at the age of the inhabitants of Berlin, but also the scarred city surroundings. The project opening took place at the Galerie Henrik Springmann where details of his work could be seen close up. 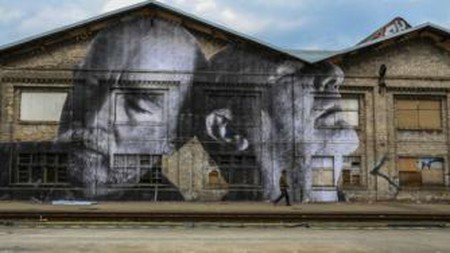 Berlin notoriously has had a difficult history that is still very much fresh in the memories of not only the city’s inhabitants, but also throughout the rest of the world; the Berlin Wall came down merely 24 years ago, a symbol that had divided the West from Communism for decades. The elderly inhabitants of Berlin, much like some of the aged architecture, have lived through some of the most turbulent times in recent history. For many of those portrayed, ‘The Wrinkles of the City‘ was a cathartic experience that enabled them to face the difficulties of their past, whilst regaining a social significance. Something that is prone to happen to the elder generations who are easily forgotten.