If You Think Rock 'n' Roll Is Dead, You Aren't Listening To La Femme

“That’s rock and roll.” It’s a phrase I hadn’t heard in years until I met French outfit La Femme.

It was around 7:00 p.m. on Oct. 19 in New York City. The night before, La Femme had opened for Red Hot Chili Peppers at AccorHotels Arena in Paris, the last of a short run with the California funk rockers. Following their set, the group forwent sleep for a flight to NYC. Shortly after their arrival, the band was moving their gear into Warsaw in Brooklyn and doing their soundcheck. By the time the interview started, it was 1:00 a.m. in Paris, and the band’s waking hours were taking their toll.

“But that’s rock and roll,” multiple members of the band would tell me that evening.

To claim a rock ‘n’ roll lifestyle today comes off a bit démodé. We live in a time where Charlie Sheen has declared himself a “frickin’ rockstar from Mars,” and where many of the genre’s lingering legends — Gene Simmons, Flea, Courtney Love, Bob Dylan, to name a few — have declared rock dead. With radio play dominated by hip hop, EDM, country, and pop, it’s easy to understand why many might believe such a statement to be true. But really, it’s just the end of one model; their model. Kids are still packing into unfurnished basements and grubby local bars Clearly, none of them has listened to Car Seat Headrest’s Teens of Denial; none of them have attended a La Femme live performance. 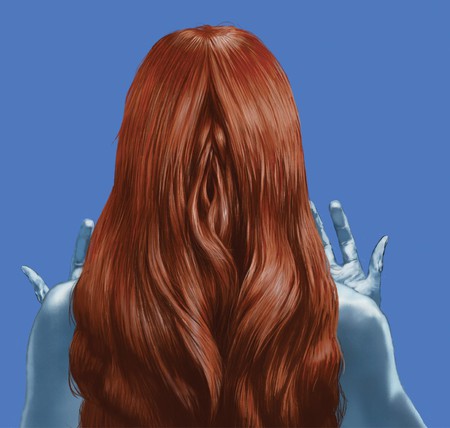 Receiving labels such as cold wave, psychedelic pop, and surf rock — the band has been described as a combination of The Velvet Underground and Kraftwerk of sorts — La Femme caught ears worldwide with the unshakable indie bounce of their debut album, Pyscho Tropical Berlin. Three years later, La Femme’s 2016 sophomore LP Mystère has arrived, and with it a more sophisticated La Femme.

Now, this doesn’t mean the band has given into newfangled trends; Mystère‘s ambition only amplifies their freaky proclivities. Opener “Sphynx” immediately lets listeners know this isn’t the same La Femme, swirling synths layering overtop pulsing kicks to create what sounds like, and is evidenced in its video, ancient Egypt if it were sucked through a wormhole.

While tracks like the Western-influenced “Où Va Le Monde,” the group-vocal rush of “Tatiana,” the stuttering”Exorciseur,” and the debaucherous night on the town “S.S.D” remind returning fans of their preferred psychotropic treat, Mystère doesn’t shy away from acknowledging life’s bleaker moments throughout its 15 tracks. “Elle Ne T’aime Pas” discusses failed relationships, “Septembre” takes on the shortcomings of the current education system, and the slow-building “Vagues” tackles the cycle of life and death, climaxing in a Pink Floyd-esque guitar solo.

It’s when the album finally reaches it’s hidden English track, “Always in the Sun,” that the album’s full message comes together. Drawled-out lyrics like, “I don’t know why sometimes my eyes only see the light with pain / erase the darkness in my veins / even if the sun’s going down you’ll never be lost or drowned / come with me beyond the sun,” hover over head-bobbing melancholic production, drawing parallels to some of Gorillaz hits like “Clint Eastwood.”

Mystère is a true odyssey: it’s humbled, it’s hopeful, it’s tempestuous, it’s intelligent, it’s enigmatic, it’s sincere, it’s always sexy, and it deserves your undivided attention (and a translator, if necessary). La Femme is easily one of the best current musical offerings from France, and all aspiring bands would do well to match their energy.

Sitting down with some of La Femme’s members, I asked them a few questions about Mystère‘s creation, their writing process, and their travels.

Clémence Quélennec: We were trying new stuff because we had traveled a lot, been on tours. We wanted to go other ways and try things like acoustic stuff, electronic stuff, more experimental.

CQ: Because maybe it was so different, so it was the best place to start.

LNR: It’s giant, you know? When you begin with that… it’s a super intro. Many times, we open the show with this song.

CQ: It sets the mood.

LNR: Yeah, it’s kind of a big story with many characters.

CQ: And many moods. Inspirations.

LNR: It’s necessary that you have characters and different personalities like this.

CQ: Also, at the end of the album, we have this long song, and you can just sit by yourself and let everything go away.

CQ: It’s really not about anything that happened. It’s about sad, sad love affairs. It happens to everybody, and the message is that it keeps going, so keep going. Be positive, it’s okay.

LNR: We have political opinions, but they aren’t represented in the music.

MM: Eh, because the woman is the woman.

LNR: Also, because it is a choice of aesthetic.

LNR: For French, it’s not really cliche, but sort of funny. We want to be funny. Also, not shocking, but conceptual.

LNR: We don’t have so many problems.

LNR: John Lennon said that, “French rock is like English wine,” but it’s not true. Always there is good and there is bad. Also, it’s cool, when we listened to music in English when we were kids, we understood nothing. But it was just, “Ouiiiiii!”

CQ: It’s not all about the lyrics. You’ve got beautiful melodies and the music. Lyrics and melodies are right on the same level.

LNR: We help them, but it’s also for the live. We all have our own way to play, our own way to sing. Even if it’s not Clémence who sings this song on the album, when she interprets this song, you know, she interprets it her way because it’s Clémence. It’s not done the same way as the album. It’s kind of different. When we do our live tonight, it’s even more punk than in the recording.

CQ: For the album, I tried every song, and we decided which voice is best. And sometimes we just mixed voices together, and tried a lot of stuff, effects, et cetera. And sometimes there were some songs that were, at first, being sung by a woman, and then at the end it was the guys singing it. So, we tried.

LNR: One of the most shocking places I’ve ever seen was Jerusalem.

When we went to Laos it was amazing. To play with kind of a Laotian opera, with dancing and all costume, and to be supported by this kind of traditional band was incredible. It wasn’t just like a pop concert, like random pop guys who come and play. No, no, it was incredible. Also, Mexico was super rock ’n’ roll.

LNR: Yeah, when we went to Brazil before, we knew about Tropicálian music in the ‘60s, but we bought so many records to discover it.

LNR: Not to be in our mood, but in their own mood. Everybody who listens to our music feels different things, with different tastes, and different smells, and different touch. We hope they feel proper, and sensitive, emotion. You know, I don’t know what lives are, what they live like every day. Just be in a [state of] travel, don’t always be in reality.