How to Spend Two Weeks in the French Riviera 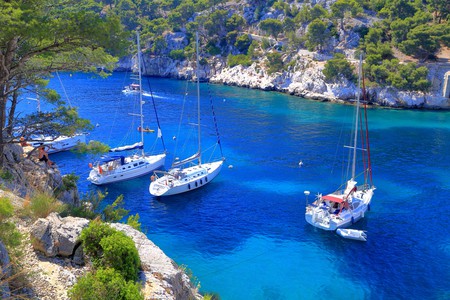 The Calanques on the coast of Cassis and Marseille | © Inu/Shutterstock

The French Riviera is legendary, whether it’s visiting the super chic St Tropez, multicultural Marseille, James Bond’s Juan-les-Pins or Matisse’s Nice. Here’s the ideal itinerary to really see everything you need to.

Day One: Arrive in Marseille

The best place to start a trip to Marseille is in the old port, the cultural heart of the centre of town. There are lots of bars and restaurants to have dinner and look out over the picturesque harbour. After dinner, climb the many steps up to the Basilica Notre-Dame de la Garde, the highest point in the city. It has 360-degree panoramic views around the bay (if you can’t manage the steps, take the tourist train up in the morning).

If you want a beach day, head out to the fishing village at the end of coastal road, east. The Baie des Singes has a great little cove, although it’s not the easiest place to get to – but that’s why it’s a hidden gem. The little beach at Les Goudes is great for kids and you can head to the bar, 20000 lieues (20,000 leagues under the sea) for Happy Hour. If you want to explore the city, head to the Palais Longchamp, built to commemorate the ten-year programme to bring water into Marseille and rid the town of cholera. You’ll find the Natural History Museum and the Museum of Fine Arts here. Check out the old tobacco factory La Friche, for cultural events (there’s a DJ on summer weekend evenings), Corbusier’s brutalist “city within a city” or just wander the Cours Julien and have dinner in one of the more unusual African restaurants.

Marseille has its own natural wonder, Les Calanques. These inlets eroded into the limestone cliffs over millions of years and now offer a great opportunity to hike or sail into little secluded bays (the word “calanque” means inlet in the old Provencal dialect). People love the restaurant Le Château in the Calanque Sormiou. You can occasionally drive in, if the risk of overcrowding and fire are minimal (i.e. not in the summer months).

Cassis is beloved by locals and tourists alike. It’s a thriving little fishing village with a first class beach (where you can opt to hire the expensive sun loungers and have waiter service for your drinks rather than sitting on the shingle with a picnic). The windy streets are full of top-rated clothes shops and ice cream vendors, and there are plenty of good restaurants on the quay to taste the daily catch. 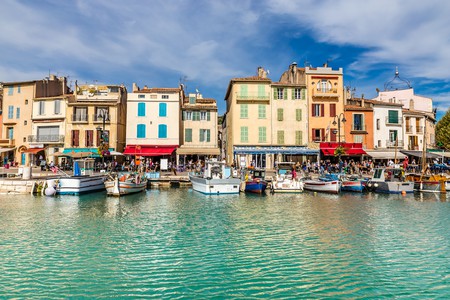 The coastline east of the town of Hyères is wild and rugged. Park here to catch the ferry to Porquerolles, an island that doesn’t allow cars and is a great place to replenish your batteries. Wander the 14th century fort, the church and the lighthouse. It’s a conservation area but they’ve planted lots of eucalyptus trees to provide ample shade and there are some hotels, restaurants and shops. It’s best to take some provisions from the mainland though, as prices are more expensive on the island.

Before you head into St Tropez, take the time to visit Ramatuelle, the village next door. It’s where you’ll find some of the local vineyards, like the Château des Marres and the reputed Château Minuty. Find a full list here. Pampelonne Beach is the most famous of all St Tropez’s beaches and it’s where you go to see and be seen. Brigitte Bardot made the beach famous when she filmed here in the 1950s. Try Club 55 for an upmarket dining experience. Sleep in an iconic hotel, like the Byblos.

St Tropez isn’t big, despite its reputation, but this small place exudes a ton of style. Walk around La Ponche, the old fishing village. Head to the Citadel, whose dungeons house the Maritime Museum, which celebrates St Tropez’s rich coastal heritage. Or the butterfly museum that houses over 30,000 species. Or the Annonciade museum, which boasts being the oldest avant-garde art museum in France. Dine in one of the waterside bars/restaurants and watch the super yachts head in and out of town.

The port of St Tropez | © PlusONE/Shutterstock

Take your time to drive to Cannes (in the summer, you’ll need to because of the traffic). The coastal road includes the towns of Fréjus and Sainte-Maxime. Stop at Aqualand if you need to cool down in the summer heat. Check into one of the delightful boutique hotels that the town has to offer and find some amazing seafood.

There are lots of reasons to visit Cannes. Walk the old neighbourhood of Le Suquet and visit the Marché Forville to try local food and produce straight from the market stalls and vendors. After filling your belly, spend an afternoon on the Croisette visiting the Hotel Carlton, used as the backdrop for Alfred Hitchcock’s film To Catch A Thief. 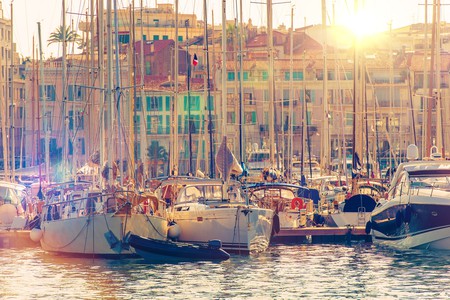 The harbour in Cannes | © welcomia / Shutterstock

There are lots of great drives to take around Cannes, inland. Head up to Grasse to take in the Perfume Museum or to the Monastery de la Verne. Details can be found here.

Antibes is always the place that high society has hung out. Whilst Cannes is trendy, Antibes is classy. It’s where you’ll find the utterly chic Hotel du Cap, which F.Scott Fitzgerald used as a backdrop to his novel, Tender Is The Night. He partied here with all his friends in the 20s and 30s, inviting jazz greats to play at his wild parties. Nearby Juan-les-Pins is where Ian Fleming sent James Bond to recuperate after each heavy mission, and if you want to pretend to be Bond for a day, this is the place for you. Make sure you visit the Picasso Museum where the painter lived and worked in 1946. 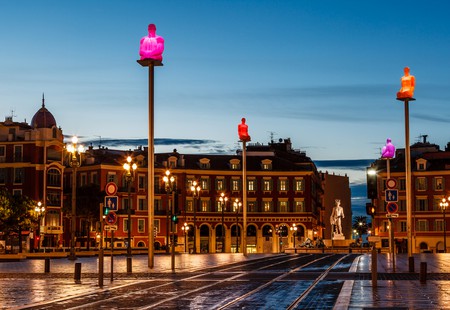 Your last two days will give you enough time to taste a little of what Nice has to offer. Walk the smart, tree-lined neighbourhood of Cimiez, which contains Roman remains and was where the first grand hotels were built in the 19th century to accommodate the people who started to arrive to winter in Nice. Queen Victoria was one of them. Matisse and Chagall both lived and worked in Nice and Cimiez also has museums dedicated to both of them. Find a little time to hang out on the Promenade des Anglais, the seaside boulevard built by the English when they arrived in their droves. If your budget can afford it, book a table at the Hotel Meridien for a dinner table with a view over the entire town. It’s a perfect way to celebrate your voyage.