How To Spend the Perfect Weekend in Toulouse 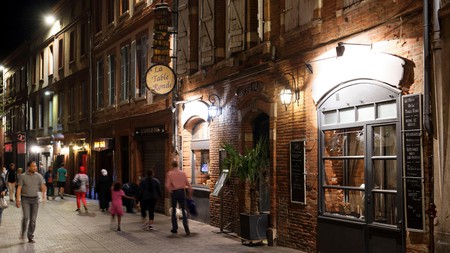 With its ancient history, eye-catching architecture and cool bars, the city of Toulouse guarantees 48 hours of fun-filled adventure. If you’re visiting for a short break, here’s how to soak up the unique atmosphere of the city.

The blend of historic and hip in Toulouse gives the capital of France’s Occitanie area a dynamic atmosphere that’s unlike anywhere else in the country. Home to one of Europe’s oldest universities and once a prosperous city of wealthy merchants, today it welcomes visitors into streets lined with fashion boutiques, beautiful gardens and cultural hotspots. If you’re spending a weekend among the magnificent coral-coloured 15th-century mansions that gave La Ville Rose (The Pink City) its name, here’s how to make the most of your time. 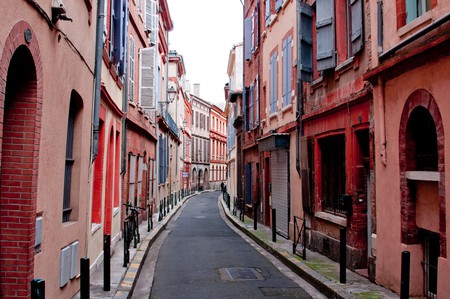 Morning – explore the peace of the Jardin des Plantes

The tranquil Jardin des Plantes lies next to the Museum de Toulouse, the city’s natural history museum, making it the perfect place to start your trip. Grab a croissant and a coffee en route, and aim to arrive at gardens by 9am so you have time to meander the tree-lined paths and admire the colourful blooms before the museum opens at 10am. Look out for the pink striped roses, which are particularly spectacular. Watch ducks dive and squirrels scurrying – if you have children, there’s a large playground to burn off some energy before heading into the museum. 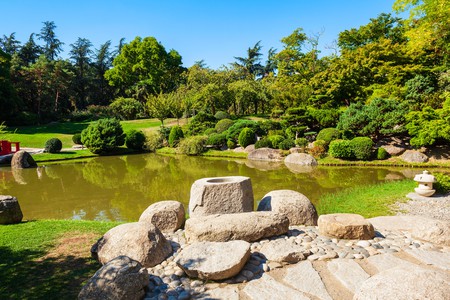 First opened in 1865, the museum fascinates visitors with fossils, skeleton displays, bugs and butterflies. It has a vast and impressive collection of taxidermy which is worth admiring.

Leave the museum just after midday so you can join the Ateliers des Chefs at 12.30pm for a cookery lesson with French chefs. It’s just a 10-minute walk from the gardens, but must be booked in advance. Here, you’ll be taught how to make a specialty French dish – and of course, taste it. After the class there’s a degustation (tasting session) so you can savour your own creation and refuel for the afternoon ahead.

Head along Rue de Metz to visit Toulouse’s cathedral of Saint-Etienne. The building is an interesting amalgamation of two different cathedrals; one in southern French gothic style from the 13th century, which features a stunning sunflower-like rose window, and a northern gothic tower built on a Romanesque foundation. The different styles continue inside; peek inside to wonder at the splendour of the architecture and interiors. 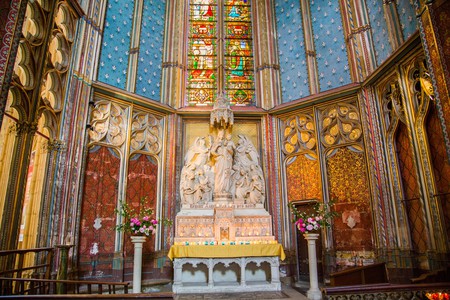 Walk down Rue de Metz towards the Garonne river and stop to admire the incredible Hôtel d’Assézat just before the Pont Neuf. In the 15th century the region became very prosperous from trading a particular blue dye extracted from the pastel plant, or woad. The wealthy pastel merchants poured their riches into stunningly beautiful bricks and mortar around the city. This was merchant Pierre d’Assézat’s property, which now houses the Bemberg Foundation’s art gallery. Visit the neighbouring Terre de Pastel boutique as you leave to select a souvenir of your time in the city. 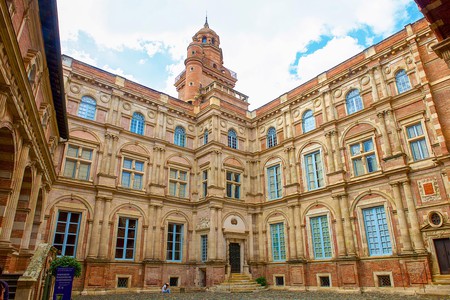 If you’re visiting in summer, head to the “beach” beside the Garonne river – to get here, once you reach the Pont Neuf bridge you must turn left towards Toulouse Plage (at the Prairie des Filtres). It’s the ideal place to relax and sunbathe the long afternoon away. No matter the season, end the afternoon at contemporary art gallery Les Abattoirs, a renovated 19th-century slaughterhouse with a spectacular high ceiling; it contains over 4,000 works of art. 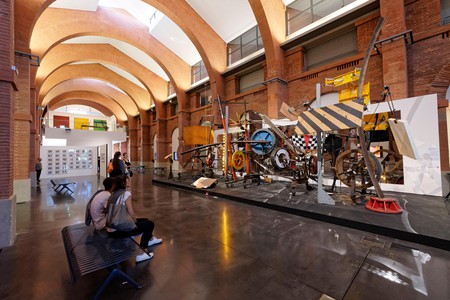 Dine out at two-star Michelin restaurant Py-r or one-star Le Cénacle. Both offer modern dining – the former renowned for its white-washed stone interiors and the latter for its classic and contemporary decor – with exciting twists on seasonal and regional dishes.

After your meal, take a 10-minute stroll through the heart of the city, and head to Fat Cat for an evening of cocktails. Don’t stay out too late, though – tomorrow is still to come.

Morning – venture into myth and machine

In 2018, a gigantic minotaur took over the streets of Toulouse as part of an incredible theatre show by La Machine, called Le Gardien du Temple (The Guardian of the Temple). Today, these “human machines”, as well as many others made for art and performance purposes, now live at La Halle de la Machine. Have a quick breakfast at one of Toulouse’s charming cafés and head to the venue to wonder at these creatures. You can book a ride on the mythological half-man, half-bull; it stands 13 metres (43 feet) high, and is operated by a team of people. It’s rightfully popular, so be sure to book in advance. 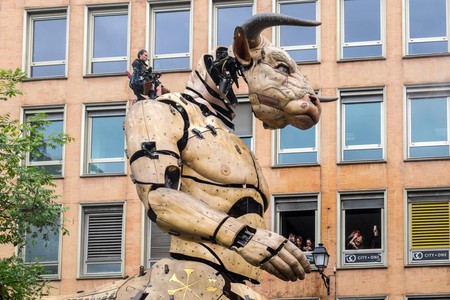 To get back into the heart of Toulouse, where you’ll have lunch, take the train from Montaudran station (a few-minute walk away) to Matabiau station, or take bus number 23 from Gonin bus stop (a five-minute walk from the museum) and get off at Jean Jaures stop near the Citiz Hotel.

Alternatively you could hire a bike from VélÔToulouse (stations on Avenue de l’Espinet or Rue Gonin Angle Genin are closest). It’s a pleasant 20-minute cycle from Halle de la Machine to your lunch destination at Galeries Lafayette. Lunch on the top floor in restaurant La Biche Sur le Toit offers incredible panoramic views over Toulouse from the terrace and a superb €23 (£20) lunch menu from Michelin-starred chef Michel Sarran.

On leaving the restaurant you’ll find yourself by the Capitole, the vibrant heart of the city. This striking building, with a grand neoclassical facade, is the town hall, theatre and state rooms. The grand 60-metre (197-foot) Salle des Illustres, with its elaborate 9-metre-high (30-foot) ceilings, is a particular must-see for art and architecture lovers; it is filled with Toulousain history and with artwork by artists such as Henri Martin, Jean-Paul Laurens, Paul Gervais.

After, walk five minutes to the famous Victor Hugo Market. Once known as the Wood Market, selling wood and animal feed, it was renamed after the writer Victor Hugo in 1886. The striking white geometric building has undergone renovation in recent years, and houses a huge range of market stalls. The sheer variety and abundance of the food, from fresh seafood to local cheeses and colourful produce, will seriously tempt your taste buds.

Wander to Brulerie Victor Hugo for a freshly ground coffee or carefully crafted latte, before visiting the beautiful and historic Basilica Saint-Sernin. It was built in the 11th century and is the biggest Romanesque church in Europe, making it worthy of the title of UNESCO World Heritage Site. If you have time after, visit the Japanese Gardens in Compans-Caffarelli park; the design was influenced by those created in Kyoto between the 14th and 16th centuries, and it’s a tranquil escape from the bustle of the city streets. 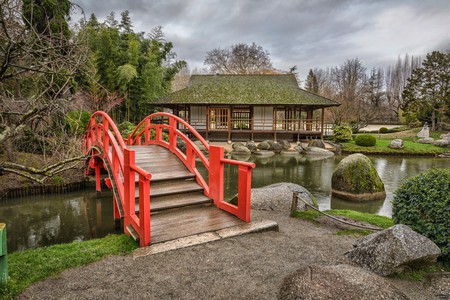 Head back to the centre of town for dinner, passing by the 13th-century Couvent des Jacobins on the Place des Jacobins.

It isn’t easy to find restaurants open on a Sunday evening in Toulouse, so if you’re spending the weekend here, options may be limited. However, Le Bibent by the Capitole welcomes guests until 11pm. It’s owned by chef Christian Constant; previously a regular on French TV’s Top Chef programme, he also owns five additional restaurants in Paris, including Michelin-starred Le Violon d’Ingres.The menu includes Toulousain speciality cassoulet (a slow cooked meat and bean stew) as well as vegetarian and vegan dishes. Save some room for dessert and indulge in the dark, delicious tarte au chocolat.

If you’re looking for some after-dinner entertainment, try Les Tricheurs, a late-night bar that hosts games of all types, from card games to classic board games. This intimate bar serves beers and cocktails and is an entertaining way to end your trip to Toulouse.