How to Spend 48 Hours in St Tropez 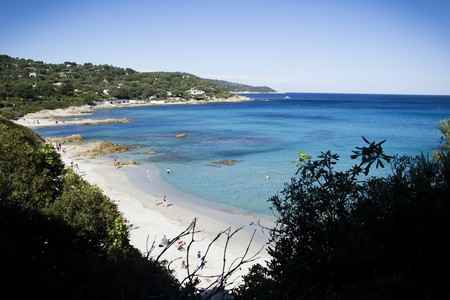 St Tropez has everything to offer for a two-day stay. It’s just enough time to experience everything that has made its reputation – the beaches, the restaurants, the outrageous night-life, and the beautiful architecture. Here’s our guide on what to see and where to go.

It’s a very small town, so it is possible to walk around on foot once you’re there. However, it can be difficult to reach the town without a car (but be warned, traffic in summer can be a nightmare) and many of the better beaches are outside of St Tropez itself. This itinerary assumes that you have a car.

Start your first morning with breakfast in Le Vieux Port (the old port) of St Tropez, at any one of the cafés. Order a coffee and croissant and sit facing the very large yachts that come and ferry their wealthy owners into and out of town. Walk around the harbour and head to the oldest avant-garde art museum in France, La Musée de l’Annonciade. This small but beautiful chapel was built in the early 16th century and houses art work painted between 1890 and 1950. It was built by monks who ‘redeemed’ sailors when they returned from captivity by invading forces.

Then walk around La Ponche, the old fishing district of St Tropez. There is a small beach here (only one of three in town), which is a great place to admire the pastel-coloured houses that have become synonymous with the Old Town. Visit the Hotel Ponche, a very chic boutique hotel in the middle of it all, and have a mid-morning cup of tea or coffee. End your morning by sitting at one of the nicest seafood restaurants in town, facing the port. Choose either L’Escale or Le Girelier.

After lunch, do a little exercise by heading up to the Citadel of St Tropez. It used to play a major role in coastal defences in the region and saw off many an attack by Spanish galleons (until modern artillery became too much for the ramparts to withstand and it was decommissioned). The dungeons have been listed since 1921 and from 2003 onwards, it has housed the Museum of Maritime History. As well as describing the generations of men in St Tropez who spent their lives on the sea, the citadel also offers fantastic views over the city and sea beyond. On the way back, visit the interesting and quirky Museum for Police and Cinema. The building used to be the police station and was used as the backdrop for several films.

St Tropez is a lively place in the summer (many restaurants may be closed in winter) but it’s a chic, expensive affair. Head out to have an apéritif (pre-dinner drink) at Chez Madeleine, one road back from the port. After a nice glass of local rosé wine and a plate of charcuterie (cured meats) head to your (reserved) table at Les Viviers du Pilon. This upmarket seafood restaurant is on the water and a perfectly decadent place to watch the sun go down. Toast your good fortune at having secured one of the best seats in St Tropez. If you feel up to it, many of the major clubs are open until the early hours. Maybe Les Caves du Roy (attached to the super swanky Hotel Byblos) or the VIP Room. ‘Dress to impress’ and expect to ‘flash the cash’ or you won’t stand a chance of getting in easily. If you fancy something a little more alternative, head to Chez Maggy for a themed night, where costumes are encouraged – the more outrageous the better.

Visit one of the great bakeries in town to pick up some hot croissants and a fresh tarte Tropézienne. This cake (a sort of brioche) was invented in St Tropez at the famous bakery that now goes by the same name.

This is the morning for coastal walks. There are two great options. Either head to the Cap Camarat lighthouse and take the coastal path around the headland. It’s the second highest lighthouse in France and offers a great view. You can walk down to a beautiful beach there called Bonne Terrasse.

A longer alternative is to walk around the headland to the south of the town centre. Details of where to park and where to go, are described here. Wear appropriate footwear – the coast around St Tropez is beautiful, wild and rugged in places, so be prepared. In the summer months, take a lot of water and pack some snacks.

A visit to St Tropez isn’t complete until you’ve been to Pampelonne Beach. It’s actually several beaches in the same bay, each with a different personality. Tahiti Beach in the north is a ‘clothing optional’ beach, while Nikki Beach has a more party-like atmosphere. Pampelonne is where the Allied forces landed in France to retake the country at the end of World War II. It was then made famous through lots of film shoots with Brigitte Bardot in the 1960s and is now the place to hang out for the A-listers. It can be pricey. Have lunch at the Bagatelle Beach Club on Nikki Beach or at Tahiti Beach. Have a swim and relax on the loungers for the ultimate beach experience.

After a drink in the port at Le Sénéquier, have dinner at the Café des Arts, a little low-key and friendly brasserie off the main drag. It has a beautiful outside terrace where you can watch the locals play boules and toast your fantastic 48 hours in St Tropez.