How to Make the Most of a Weekend in Cannes 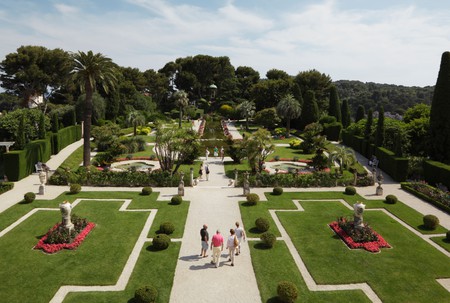 Although this charming coastal city is best known for its glamorous namesake film festival, Cannes has so much more to offer beyond the star-studded event. Full of history, medieval architecture, rooftop bars, markets and a world-renowned food scene, experience all of this and more in this 48-hour guide to the seaside town.

Start off your morning of sightseeing with fresh flaky pastries and a cup of espresso at a local favourite café, Sapore di Pane. Don’t fill up too much though, as the next stop will contain a multitude of French delicacies.

A few minutes’ walk down the road will lead you to the Marché Forville. Cannes’ largest covered market is a local institution, brimming with food stands, fresh produce and flower stalls. Wander through the rows of stalls, and soak up the buzzy atmosphere. The market is a great insight into everyday life in the city. Local vendors will be happy to walk you through the selection, though be sure to buy a snack or two to thank them for their time. Stock up on fresh baked breads and farmer’s cheeses, and keep an eye out for a stall peddling socca, one of the city’s staple dishes. The traditional chickpea pancake (made solely using chickpea flour and olive oil) is cooked street-side on a fiery grill and is perfect for a mid-morning snack.

The market is at the entrance to Le Suquet, the oldest part of Cannes. Established by the Romans and later inhabited by medieval monks, the area is made up of winding narrow cobblestone streets and charming boutiques.

Musée de la Castre once acted as a monastery, and later a fortress, but today the castle is an art gallery, home to primitive art, Mediterranean antiques, French landscapes and works of the great masters of Provence (Jean-Baptiste Olive, Édouard Crémieux and Édouard Ducros are the most notable). Wind your way to the top of the turrets for a spectacular view of the bay.

Afterwards, step into the Église Notre-Dame-d’Espérance (if mass isn’t in service). The Catholic church replaced the old medieval chapel Saint-Anne, and it took over 100 years to construct. The project was completed in 1627 in a late Gothic style, with Romanesque and Renaissance features, and in 1937 was classified as a historic monument.

Next, hop aboard the Petit Train de Cannes to explore the city. For 12 euros (£11), this little train tour circles the old and new towns, stopping at top sights along the way. Headphone commentary provides riders with history and anecdotes about the city.

As the sun starts to set, wander down to the port. Marvel at the mermaid Atlante, a grand statue erected in 2000 as a reminder of the city’s fishing heritage. Stop into L’Alba, a seaside restaurant, to watch the day wrap up with stunning sea views. Here, diners and drinkers sit back on cushioned couches and snack on steamed mussels and sashimi dishes from fish pulled fresh from the water. The drinks menu boasts a range of locally made Provençal wines.

Stroll the gardens of La Croix-des-Gardes

While yesterday was about sightseeing, today is about exploring Cannes’ natural surroundings. Fuel up for the day and head to La Croix-des-Gardes, a national park just outside the city. It spans 200 acres (80ha) of the hillside and is dotted with palatial estates with impressive gardens.

Stroll through the 19th-century Villa Rothschild and check out the Neoclassical architecture and sprawling English gardens, then head to Château Eléonore. It was built by ex-chancellor of Britain Lord Henry Brougham when he travelled here on his way to Italy. Brougham fell so in love with the area that he set up a grand home on the hill. Stop for lunch at the nearby Le Garden View, where diners can sip cocktails by the restaurant’s pool.

Sip wine with monks at the Îles de Lérins

After lunch, head to the old port to catch a boat to Îles de Lérins. Just 15 minutes off the shore from the centre of Cannes, the isles are a collection of four islands. Île Saint-Honorat is one of them, and home to serene walking paths and a small vineyard tended to by an order of Cistercian monks.

The medieval Lérins Abbey has been home to the same order of monks, who have all taken a vow of silence, since the 5th century. They spend most days piously tending to vines, crushing Chardonnay, Clairette and Syrah grapes, and they host daily tastings for visitors.

Spend the rest of the afternoon wandering the footpaths that encircle the island, and don’t miss the 10th-century Gothic chapel that sits at the end of the island.

Enjoy an evening on the Croisette

After you return to the mainland, head out on the town by way of Rue d’Antibes, marvelling at the window displays of designer clothes and chocolatiers along the way.

First stop: head to the buzzy patio Le Roof to watch the city’s sunset. After you’ve finished your drink whilst watching the sunset, stroll the Boulevard de la Croisette. This is where the city’s glitterati indulge in the city’s festivities on what is known as ‘the jewel of Cannes’.

After you stroll, walk over to the Carlton Intercontinental Hotel, which is at the centre of the Cannes Film Festival and was the backdrop for Alfred Hitchcock’s To Catch a Thief (1955). Around the corner, settle in for dinner at Le Park 45 in Le Grand Hotel Cannes for a meal of Michelin-star, light Mediterranean cuisine.