Heading to France? 'Faces Places' Is the Film You Must See First 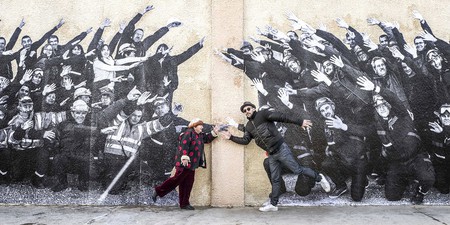 There is more to France than Paris, Provence, and the Côte d’Azur—as New Wave veteran Agnès Varda and photographer-muralist JR show in their iconoclastic travelogue Faces Places.

Shortlisted for a Best Documentary Oscar, Faces Places might be the last film the 89-year-old Varda directs, or in this case co-directs. Her sight is failing, as the movie reveals, and she could only work with JR and the camera crew in four-day batches. She and JR are on screen for much of the film, and the process must have been exhausting for her.

But if it does prove her last work, it will be a fitting testimony because of the way it explores the opposition of still photography and cinema while meditating on memory and mortality. Photographs seek to fix moments in time; film and video deny that impulse. Varda, who has worked in both disciplines, constantly finds herself at their nexus in Faces Places. 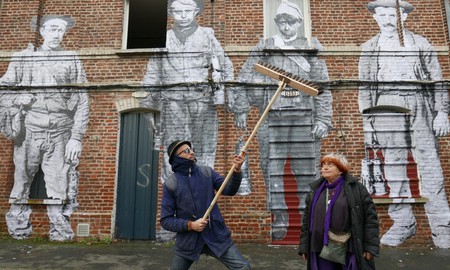 JR, Agnès Varda, and coal miners of the past in Faces Places | © Cohen Media

If this suggests the film is a theoretical wallow, however, nothing could be further from the truth. In JR’s van, equipped with a customized photo booth, the diminutive, chatty director and the enigmatic, sunglasses-wearing photographer, energetically traverse France, making stops at villages off the tourist track.

Choosing their subjects carefully, they proceed to photograph local working people and JR’s assistants mount the large-scale black and white photos on different kinds of spaces. Occasionally, they blow up and paste vintage photographs of people, or photos of found objects: images of fish photographed in a fishmonger’s store end up on a water tower, for example. JR puts photos of Varda’s eyes and toes on the sides of working rail tanker trucks.

JR is under no illusion that their art is permanent; ephemerality, indeed, lends to the guerrilla-art quality of their acts of creation. It’s a wonderful paradox that the static artworks Varda and JR made—probably all of which will have disappeared by now—are preserved for public memory by Faces Places’ moving pictures. 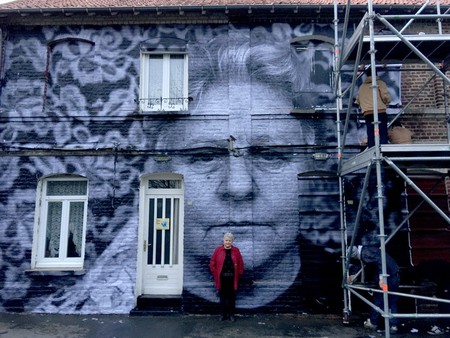 At an undisclosed onetime mining town in the North of France—Varda and JR’s first destination, seemingly selected before Faces Places was fully formulated—they talk to former pitmen and their families. Among the huge photos they post is a portrait of the last resident, the aging Jeanine, of a row of miners’ cottages. She is visibly moved by the site of her face covering her house. She is determined not to leave the house, where her parents once lived, but one wonders if she will be evicted and the cottages demolished before the weather effaces the mural?

The durability of women in an impermanent setting is also explored in the photos of three dockworkers’ wives posted on a tower of red and green corrugated ship container boxes erected at Le Havre harbor. One of these women drives 45-ton trucks for a living—she is the only female driver among the 80 in her company—but none of them had ever visited their husbands’ workplace before, as Varda had never previously visited the harbor.

“We want you to be like three big statues, three totems up there, entering this world of men,” Varda tells the women. Subtly, Faces Places is a feminist film. “We’re moving forward, beyond the clichés,” one of the husbands appreciatively remarks. 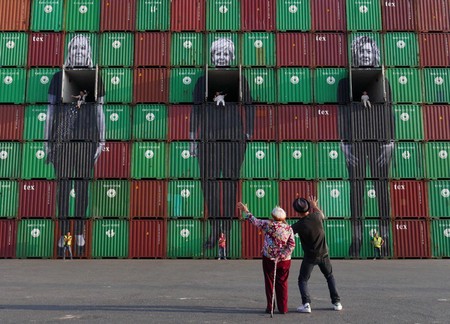 At Pirou-Plage, an abandoned Normandy beach resort that was only half-built, Varda and JR hold a party and rejuvenate the dilapidated buildings by decorating them with photos of all-comers, including lots of kids—everyone cuts out their own faces for pasting—a cheerful postman (who might have once inspired Van Gogh), and a happy-go-lucky 76-year-old hermit, Pony, with a hobby of making bottle-cap montages.

Horns of a dilemma

The different people Varda and JR meet and photograph contribute to the joy of Faces Places: they include an affable farmer who works 2,000 acres annually with only the help of his computerized equipment; two independent goat farmers who have different opinions about whether their beasts should be dehorned or not (Varda and JR think not); factory workers on an industrial plant that produces hydrochloric acid; and, in the South of France, a bell-ringer, and a lady with a parasol.

But these people also give Varda pause for reflection. JR, who teases and acts protectively toward her throughout their travels, scolds her quietly when she comments, “Every new person I meet feels like my last one.” When they visit the intimate Cimetière de Montjustin, in Alpes-de-Haute-Provence, where Henri-Cartier Bresson and Martine Franck, Bresson’s second wife and fellow photographer, are buried, JR asks Varda if she is afraid of death. “I don’t think so. I think about it a lot … I’m looking forward to it because that’ll be that.”

Yet Faces Places is scarcely morbid since it catches the indefatigable maker of Cléo from 5 to 7 (1962), Vagabond (1985), The Gleaners and I (2000), and The Beaches of Agnès (2008) “not going gently into that good night.” If melancholy seeps into the film, it is less when Varda is contemplating her own death than recalling close ones who have passed. 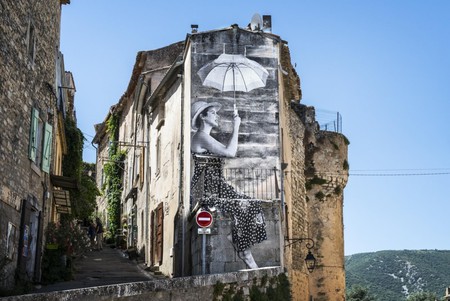 Agnès Varda and JR’s image of the lady with the parasol, photographed in the South of France, in Faces Places | © Cohen Media

On the beach at Sainte-Marguerite-Sur Mer in Normandy, JR’s team races against the incoming tides to paste on a partially submerged German military bunker a cut-out blowup of a photograph of Varda’s friend Guy Bourdin that she had taken in Saint Aubin-sur-Mer in 1954. Bourdin, the troubled artist and fashion photographer who died in 1991, had clearly been much on Varda’s mind.

Before they make the artwork, Varda and JR visit Bourdin’s old home in the film, and Varda spends time looking for an incomplete building on which to paste a blowup of her nude photograph of Bourdin posing on an incomplete building. Perhaps sensing that she is trying to recapture the irrecoverable past too much with this self-reflexive set-up, and unconvinced it will work creatively, JR proposes to Varda they paste a less arty shot of Bourdin on the bunker, tilting the picture so it looks as if the bunker is cradling him. The team goes to work.

The next morning they find that waves have swept away the blowup. “Ephemeral images are my stock in trade,” JR says, “but the sea worked fast.” “The image had vanished. We will vanish, too! The film won”t be finished,” Varda laments. Like life itself, the leisurely business of completing the film becomes a race against time for her, and this filters into Faces Places itself. Nearing the end of her journey as an artist, Varda has turned the pressure up, not down. 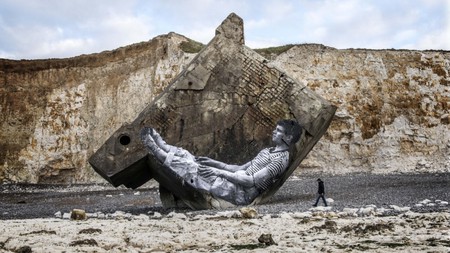 Guy Bourdin, originally photographed by Agnès Varda in 1954, gets a brief new lease of life in Faces Places | © Cohen Media

Varda and JR finally make an excursion to Rolle, in Switzerland, to see a film-giant friend of hers—her last surviving friend from the French New Wave, who is still making challenging movies himself. Varda recalls a weekend she and her late director husband Jacques Demy spent with the filmmaker and his then actress wife, and there is a hint of regret in her admission that they are no longer regularly in touch.

As it turns out, the visit to the great man’s house triggers memories of Demy that upset Varda, and she damns the absent filmmaker for his inhospitality. Before the sympathetic JR bestows an act of kindness on Varda—a nice moment that seems completely staged—he counsels her that the filmmaker “was challenging the narrative structure of the film rather than trying to hurt her.”

Agnès Varda and JR on location, with JR’s photo-booth van in the background | © Cohen Media

Varda admits at this point that she has “mixed feelings.” It might dawn on the viewer that the anticipated consummation of the film—incredible as it would have seemed for cineastes—would have been more anticlimactic than the current ending. There is a powerfully romantic sense of loss and absence in Faces Places that balances all the happy meetings and fleeting memorializations. Varda has said she is content that the film ends on a sad note.

While few visitors to France—and few French—are likely to follow in Varda and JR’s footsteps, watching Faces Places is a reminder that there is a real country behind the fantasy one found in tourist brochures, or that of the haute, intellectual Paris. It is the France of factory workers, of the post-industrial working class, of dairy farmers and dockers, of the elderly and young, a France with a spine, but also a France in which evanescence and permanence are equally true states. This could be Agnès Varda’s lasting statement.