A Guide to Nantes' Island Neighbourhood 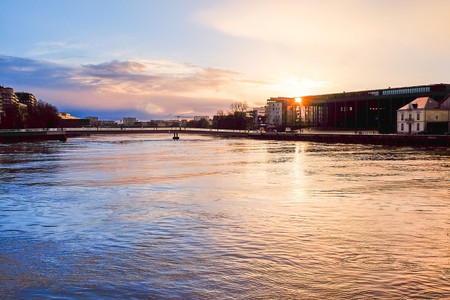 The city of Nantes is situated on the Loire River and is divided into 11 neighbourhoods. Its island neighbourhood – Île de Nantes – has been imbued with creativity in all forms in recent years and is without a doubt the most vibrant, progressive area of the city. Here’s our guide to this hip pocket of Nantes.

In 2000, the 20-year-plan for the huge redevelopment project of the Île de Nantes began. The city’s aim was to redefine the vast shipyard and deserted spaces for a modern Nantes, creating an urban landscape that focused on all aspects of city life from housing to culture and entertainment venues. The City of Nantes is projecting that by 2020, this enigmatic neighbourhood will be the new heart of the metropolis.

There really isn’t anywhere quite like Machines de l’île. The whole concept was created by François Delarozière and Pierre Orefice. It combines ‘the invented worlds of Jules Verne, the mechanical universe of Leonardo da Vinci, and the industrial history of the French island of Nantes’. The most iconic piece of Machine Island is the incredible elephant (pictured below). Carrying up to 50 passengers, this amazing feat of engineering and design is what most visitors are keen to see for themselves. However, there is so much else to see too, so don’t miss the workshop, which showcases other creations in a really amazing vast concrete and glass space. 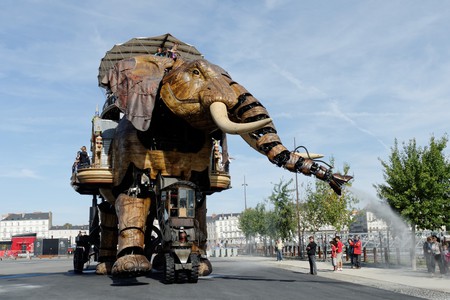 Located at the western tip of the Island of Nantes, the Quai des Antilles is perfect for strolling along as well as taking a respite and people-watching over a beverage. Its two main features are the ‘Banana Shed’ and Les Anneaux, the incredible steel rings edging the dock.

The Banana Shed was once used as storage for bananas imported from the French colonies after WW1, and is one of the main venues on Île de Nantes that has seen a complete transformation as part of the redevelopment project. It is now home to the cool art space HAB Galerie and several bars including La Calle and ALTERCAFE, with river views. Les Anneaux are hard to miss but if you want to see an impressive sight, make sure you’re here as it gets dark. When the sun sets, these 4 metre diameter rings illuminate in red, green and blue, lighting up the night sky. 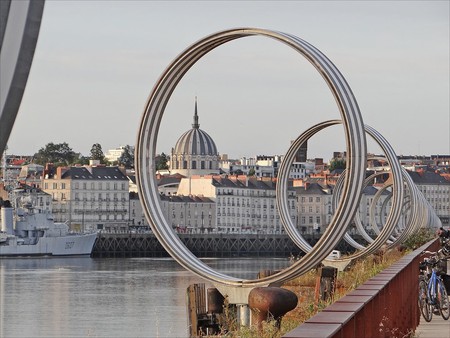 Highlights not to miss

Make sure you fill the rest of your time on the island with these last highlights, Firstly, the imposing yellow crane (known as the Grue Titan) is an icon of the Island of Nantes and if you haven’t spotted it during your trip so far, make time to see it now. It is one of two remaining cranes dating back to Nantes’ rich maritime past, seeming almost like a modern design project rather than a piece of functional machinery from the past. Another highlight for architectural lovers is Manny, a metal mesh-clad building that’s been on the scene since 2009. 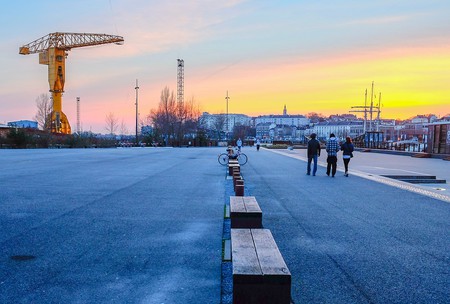 Take a walk to Trentemoult

To the south-west of Île de Nantes is the fishing village of Trentemoult. It takes only about 30 minutes on foot from the Island of Nantes, so if the weather is fine, take an amble to this colourful corner, which feels like another world compared to the machines and vast spaces you’ve just been exploring.

Flower-clad alleyways and paved small streets wind themselves past houses, cafés and restaurants, each more colourful than the last. A century ago, this vibrant town was almost exclusively the home of the local fishermen – it’s understood that the colourful façades were born from the fishermen using up their paint from their boats on their homes. Have a drink at La Civelle and fall in the love with the village’s laid back vibe. 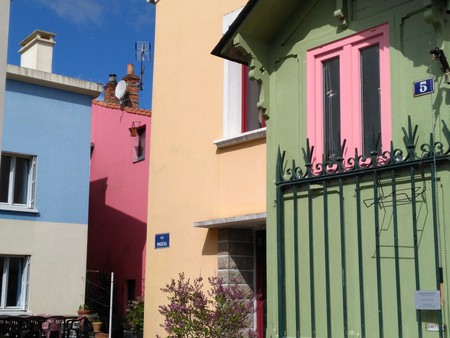