How to Get Around in Montpellier, France 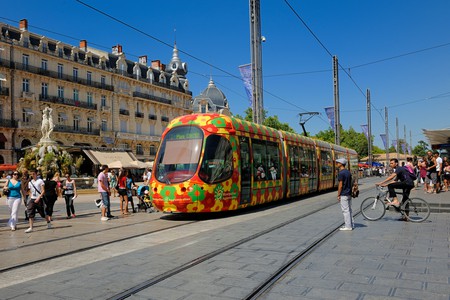 Exploring Montpellier is a cinch, thanks to the city’s convenient and economical public transport network. What’s more, the city’s tramlines are rated among the world’s most beautiful.

As France’s fastest-growing city over the past 25 years, Montpellier has a robust transport system with an ever-expanding network of tramlines. As well as travelling within the city, getting there is also a breeze thanks to Montpellier’s two train stations and conveniently located airport, just 7km (4.3mi) outside of the city.

Pro tip: Be careful when reserving a train ticket not to accidentally buy a ticket to the newly opened Sud de France TGV train station, as it is a bit further out of town.

Montpellier Méditerranée Airport is well connected, serving more than 20 destinations in France, Europe and Africa during the summer months.

The tram network operated by TaM (Transports de l’Agglomération de Montpellier) was named sexiest tramway in Europe by the New York Times in 2012 thanks to its vibrant artwork. Lines one and two are adorned with multi-coloured flowers and swallows, inaugurated by designers Elizabeth Garouste and Mattia Bonetti in 2000. The styles of lines three and four were conceived by fashion designer Christian Lacroix in 2012. These lines are remarkable for their marine-related motifs featuring fish and starfish, along with a golden design, set off by pearls, stones and jewels, using architectural motifs from the town’s Château du Peyrou and Three Graces fountain.

The network is undergoing a series of changes, including extending line one beyond the Odysseum outdoor shopping mall. Scheduled to open in 2022, it will open up the Cambacérès district, and include the Sud de France TGV station. There is also a fifth tram route, expected to open in 2025, covering Clapiers – City Centre – Paul Fajon – Lavérune and a sixth line in 2027 serving the residents and businesses of Pompignane and Millénaire eastern suburbs.

Montpellier’s tramway system is the most efficient way of getting around Montpellier and has stops close to many of the most popular tourist sites, along with art murals such as the trompe l’oeil at Place Edouard-Adam (tram stop Observatoire), created by artists Agnès and Olivier Costa, and the urban graffiti canal, quay of Verdanson on line four.

The network operates every day of the year (except May 1) from approximately 4.30am to 1am and 2am on Friday and Saturday. Trams arrive every three to five minutes at peak hours but less frequently at night.

Montpellier’s bus network covers 36 routes and accepts the same tickets as the tram; you can buy tickets from the automatic machines at the tram stops, or from the driver. One-way tickets cost €1.60 (£1.35), with a limited service running on Sundays.

For those who want to party, there is a bus service during the summer on Thursdays, Fridays and Saturdays, from midnight until 5am (6am in July and August) called Amigo, which takes passengers to and from the nightclubs on the edge of town. The main bus stop for the Amigo service can be found in front of the train station.

Pro tip: The historic centre (L‘Écusson) is a pedestrianised area that is only accessible to vehicles during certain hours. Bear in mind that parking in town can be difficult – the best way to get around this is to park at a tramway station and ride the tram into town. There are nine stations offering this service, including Occitanie, Jacou, Odysseum and Sabines.

Montpellier has 2,000 bicycles available for hire as part of its shared bicycle scheme Vélomagg, with 57 stations dotted across town. The tourist office offers an extremely useful map – Montpellier à vélo – which shows the best cycling paths. One of the most scenic routes runs along the river Lez to Palavas-les-Flots, which takes about an hour.

The Vélomagg smart bikes operate on a self-service system. Using your bank card and mobile phone you can acquire an access code, valid for seven days. Prices start from €0.50/hour (£0.45) from the first hour of use and a refundable deposit of €150 (£136) per bike.

For guided tours, Mobilboard Montpellier – found opposite the train station – runs a two-hour Segway tour of Old and New Montpellier for €50 (£45) Guests meet their guide for a 15-minute induction then set off around L’Écusson, taking in l’Esplanade Charles-de-Gaulle and Place de la Comédie, Porte du Peyrou and Cathédrale St-Pierre. Modern attractions include the city Antigone, City Hall and Le Nuage (the Cloud) by architect Philippe Starck.

Alternatively, Le Petit Train (running May to October) offers a 40-minute mini train ride around the city for €8 (£7.27) and the City Tour Montpellier red minibus runs a one-hour €10 tour (£9.09). Both leave from outside the main tourist office at Place de la Comédie.

For car rental and taxi, the cheapest options are Getaround, Modulauto and Uber. Taxis can also be readily found opposite Montpellier Saint-Roch train station.