Georges Braque, The Father Of Cubism 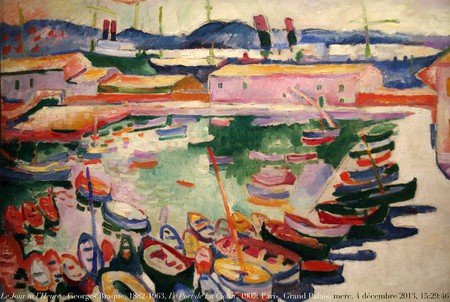 Founder of Cubism – along with Pablo Picasso – and creator of the papier collé (or pasted paper) technique, Georges Braque is one of France’s most important icons of the early 20th century. We present you with this unique insight into the life and work of a fascinating, avant-garde artist who revolutionized the cultural context of his time.

‘The painting is finished when the idea has disappeared.’ — Georges Braque

Georges Braque was born in 1882 in the small town of Argenteuil near Paris, but his family later moved to the port city of Le Havre in the region of Normandy, where he spent much of his childhood and teenage years. He was interested in sports, especially boxing, and also took a liking to playing the flute. The formative years saw him learning the ropes of the successful family business of house painting and decorating from his father and grandfather. Yet, his genuine interest in artistic painting took him to evening art classes at the École des Beaux Arts in Le Havre between 1897 and 1899. At age 17, he decided to do an apprenticeship as a house painter first in Le Havre and then in Paris; during this time he honed his skills and his expertise on materials and artistic tricks, exploring innovative techniques such as the use of wood grains and dust, which was to become a recurrent strain in his later cubist phase.

He served a year in the military, which seemed to strengthen his resolve to become an artist, studying painting in Paris, and spending a lot of his free time looking for inspiration and admiring ancient art in the revered halls of the Louvre museum. By this time, Braque, the artist, was crystallizing. Many of his earliest works between 1902 and 1904, were Impressionist in nature. This was his umbilical cord with the region of Normandy, which was a glowing center of Impressionism during its height. He was deeply influenced by Claude Monet, Camille Pissarro and later, Paul Cézanne. However, the first of the two biggest turning points in his career as an artist came about when he visited the Paris Salon d’Automne in 1905 and witnessed the works of the artistic group known as ‘Les Fauves’ or ‘The Wild Beasts’ which had the likes of Henri Matisse as its member. He was deeply influenced by the bold use of colors used as vehicles of emotions, and started painting in the fauvist style, although conservatively. 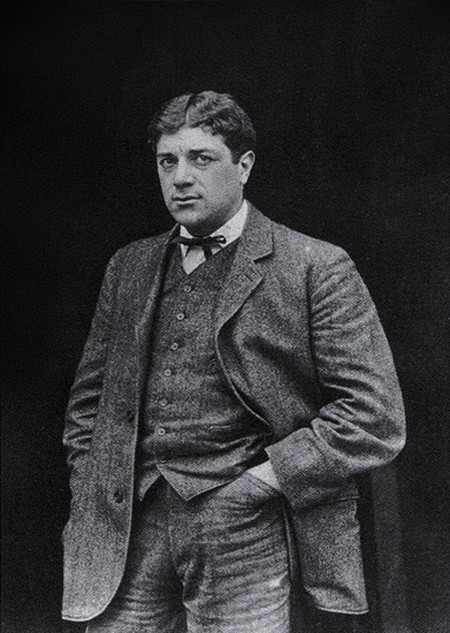 In 1907 came the next big turning point in the life of Braque, when he was introduced to an exciting young Spanish painter, Pablo Picasso. This was the beginning of a lifelong friendship, mutual respect, and artistic collaboration that was to give birth to a new revolutionary art form: Cubism. This art form was a product of their frequent exchange of ideas. They influenced each other and fed off each other’s energies. While it was Picasso who introduced Braque to a world of distorted planes and shallow spaces, it was Braque who brought geometric forms to life, a touch that was inspired from his favorite idol, Cézanne. Braque’s paintings from this early phase bordered on the realms of the abstract, with twisted perspectives and somber colors. The most important work of Braque from this phase of Cubism, often known as ‘Analytical Cubism’ is ‘Houses at L’Estaque’ (1908). The term Cubism, of course, comes from the word ‘cube’ which was used by a French art critic, Louis Vauxcelles, to describe one of his works in an exhibition in 1908. 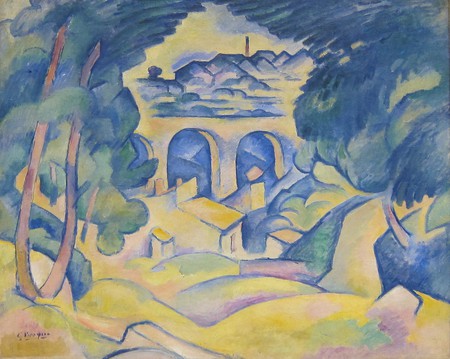 Picasso and Braque collaborated closely together from 1911 onwards to develop the analytical cubist style further, breaking down objects, spaces, and planes in such a way that it dismantled all sense of traditional perspective, and created a complex symphony of space, earthy colors, volume, breadth and vision. This new art form had the shock value, it was incomprehensible, yet had depth and meaning. It seduced the intellect and questioned the familiar. Braque’s paintings had multiple perspectives, spaces were flat, and subjects, often still life, were often so fragmented that they appeared three-dimensional. ‘Man with a Guitar’ (1911) is an example from this period. He also used collages and exploded perspectives, pulling shapes apart and reconstructing them, as in the painting ‘Clarinet and Bottle of Rum on the Mantlepiece’ (1911) and ‘Violin and Pipe’ (1913).

In 1912, Cubism entered the ‘Synthetic’ phase and saw Braque experimenting with innovative techniques like the use of papier collé, sand and sawdust in his paintings. He even used bits of wallpaper in his drawing ‘Fruit Dish and Glass.’ During the First World War, Braque enlisted himself in the French army as an army sergeant and won medals for his bravery. After suffering serious injuries, he was released from service in 1917 and resumed painting full time again, although his work became more personal, more varied in style.

In the 20s Braque did a series of paintings with women carrying fruit, another series with fireplaces with fruit decoration and guitars, and another series with tables. Thus, in this period of his career, Braque was fascinated with certain subject matters which he painted frequently, before moving on to the next subject. In the painting ‘Fruit on the table-cloth with a fruit dish’ (1925), he uses flat spaces and shapes, but plays with colors and incorporates texture for a realistic representation the of wood in the table, and he shades the fruits to create dimension. 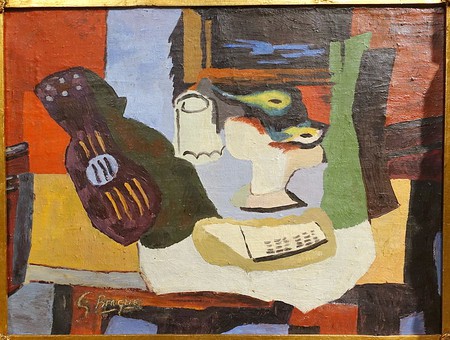 In the 1931, he began making white drawings over a background of black painted plaster, much like the Greek art he admired in his younger days. The grim events leading up to the Second World War had a profound effect on Braque and during this period he painted a series of skulls and other still life. His paintings from this time exude a sense of darkness, despair, agony and misery, and seem to make a political statement. These series of paintings are called Vanitas and the painting ‘Balustre et Crane’ (1938) is a fine example, where colors replicate the complex emotions and reactions to war.

In 1937, he won the Carnegie prize for his lifetime achievement as an artist, and in 1961, towards the end of his life, he became the first living artist to have his works displayed at the world famous Louvre museum, a place which once inspired him to be a great artist; life had come to a perfect circle for Braque. Braque is considered one of the greatest modern artists and a master of still and abstract art. His personality was also unique. He was a quiet introvert, extremely observant, sharp, determined, opinionated and intelligent. His personality set him apart from the fellow artists of his generation, who were generally more social and flamboyant.

Braque was every bit as mysterious as his paintings. In an interview with The Observer in 1957, he said: ‘there is only one thing valuable in art and that is the bit that cannot be explained. To explain away the mystery of a great painting – if such a feat were possible – would be irreparable harm… if there is no mystery then there is no ‘poetry,’ the quality I value above all else in art.’