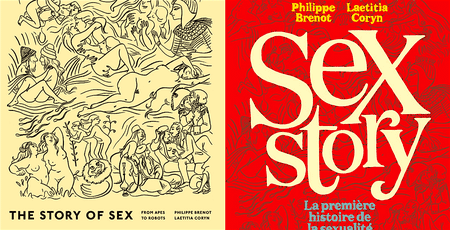 The British and French editions of The Story of Sex | Courtesy of Particular Books and Les Arènes, respectively.

Funny, erudite, and devilishly sexy, The Story of Sex is a treat for the whole family (except, perhaps, younger children and muffled prudes). A bestseller in France where it came out earlier this year, the work concerns itself with nothing less than the greatest story ever told — no, not that old Jerusalem fling — the evolution of human sexual mores.

The Story of Sex is a joint effort between Philippe Brenot, psychiatrist, sexologist and anthropologist of some renown (yeah, all of them), and Laetitia Coryn, graphic artist and general creative of surefire wit. It was written by the two in complete collaboration, hence its constant provision of both didacticism and humor. The English version, meanwhile, was assured by none other than Will McMorran, Senior Lecturer in French & Comparative Literature at Queen Mary University; dedicated readers will remember him as being partly responsible for the new translation of the Marquis de Sade’s 120 Days of Sodom. He can now safely claim to have had his way with the entire spectrum of French sexuality.

The book is organized chronologically, traveling from prehistory to the probable future to trace the evolution of human intimacy and, perhaps more interestingly, the discourse created around it. After starting with the mating rituals of our primate ancestors (where Professor Brenot’s anthropological bent surely came in handy), the book moves on to the earliest civilizations of the Fertile Crescent and, inevitably, the biblical life of Adam and Eve — albeit without forgetting to apply a keen psychoanalytic eye to the whole thing.

But The Story of Sex is more than a repository of wisecracks and startling anecdotes. As becomes clear the closer the narrative approaches present day (where more reliable historical information is available), the book is a remarkable history of man’s scientific, psychoanalytic, and political advances in sexuality — a work as comfortable explaining Freudian libido as it is with exposing the exploits of famous libertines. For that enlightened reason alone it deserves to be enjoyed by the whole family.

And what about more innocent members, you ask, must they be exposed to this indecent book? To which the correct answer is, of course, why not: Ours is a sexualized world, whether we like it or not (and who wouldn’t?), and it is time all learned about it the right way — with erudition and humor. On that count, at least, the French are way ahead of the rest.

THE STORY OF SEX:
From Apes to Robots
Philippe Brenot and Laetitia Coryn, trans. Will McMorran
Particular Books
208pp. | £20