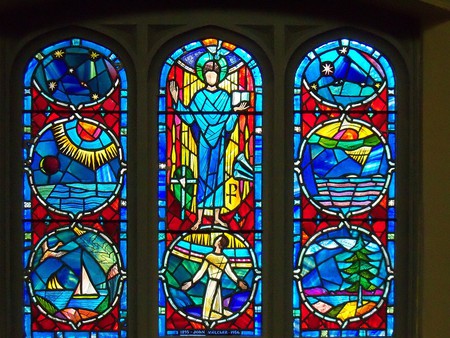 The Chartres Cathedral is one of the few perfect representatives of this category, as the stained-glass windows here are among the oldest in France. This cathedral has been a primary object of study for art historians for years now, and it never seizes to amaze. Why? Because of the Chartres Blue, a special nuance of blue that can only be found here and at a few more cathedrals built after Chartres. For art historians, this shade of blue is still a mystery today. 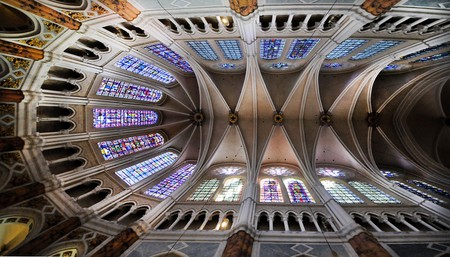 The architecture has been adapted to the needs of the stained glass. It is also the first cathedral to introduce far larger windows than what previously existed. 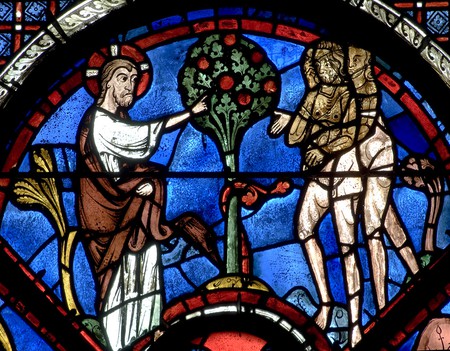 Located about 80 kilometers south of Paris, the French Gothic-style cathedral was built between 1145 and 1220. It features 176 stained-glass windows, each depicting a different scene. The entire cathedral was actually built with the windows in mind, so the architecture style bends to the needs of the windows. Most of the windows have been there since 1150 and are restored every year for conservation.

Unfortunately, the name of the architect(s) of the Notre-Dame de Chartres Cathedral is nowhere to be found. Maybe the beauty didn’t need names on it? 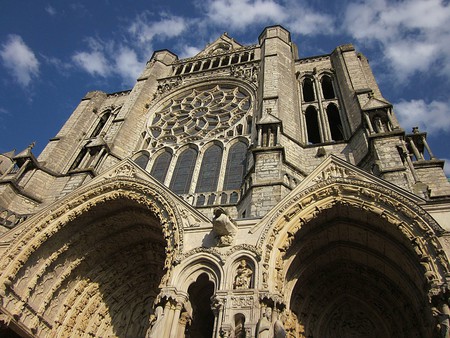 One of the most visited cathedrals in France, Notre Dame is situated by the river Seine and is considered one of the finest examples of French Gothic architecture. The stained-glass windows and its sculptures combine with the Romanesque style, giving way to an intriguing contrast between the two. 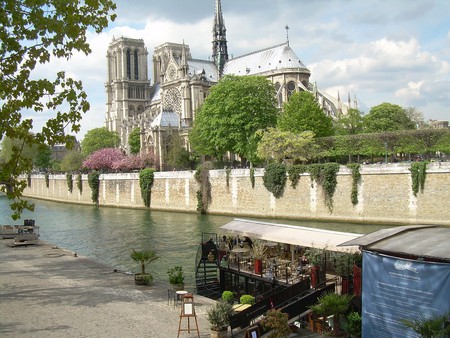 Started in the 12th century and finished in 1345, its imposing style on Ile de la Cité has been not only the home of stories like the Hunchback of Notre Dame but also home to art historians from all over the world who visit to understand the wonders of its stained-glass windows. 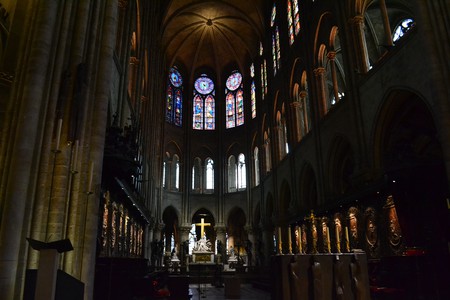 Believe it or not, the chimera statues are not the only aspect of this great cathedral that attracts visitors and historians. 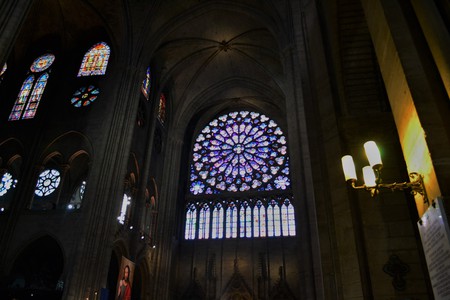 It has undergone several restorations – due mostly to vandalism and being destroyed in 1793 during the French Revolution and during the Second World War. Thanks to a second restoration in 1845, significantly important stained-glass windows, as the ones from the cloister that were considered lost, were brought back to life.

This series of windows depict the Legend of Saint Genevieve, the patron saint of Paris. Being a more recent construction, these windows fit into the neo-gothic style of architecture that Gérente designed during the restoration undergone by Lassus and Viollet le Duc. 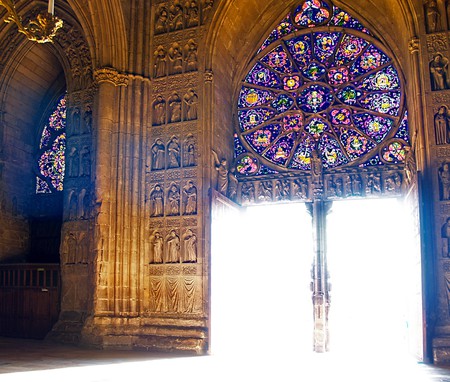 Built between 1211 and 1275, the Reims Cathedral was the place where the Kings of France were crowned. It is the second cathedral – after Chartres – with the largest number of statues and statuettes. Also falling into the French-Gothic style, the view to the two roses on the west side is very imposing, as well as the north transept. 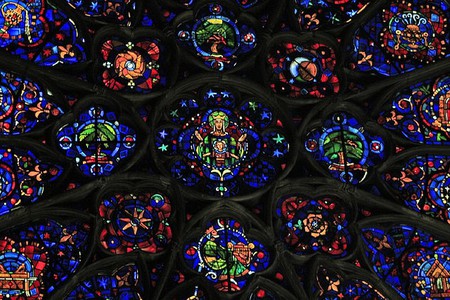 As always, the stained-glass windows are there to emphasize one contrast: how big everything actually is inside, devoid of color, cold, and how everything changes with the stories developing on the windows. 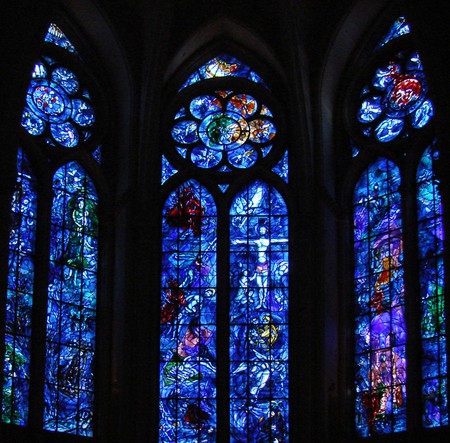 The exterior is perhaps even more filled with details than the stained-glass windows are, but it is definitely one of the most important examples France has to offer. 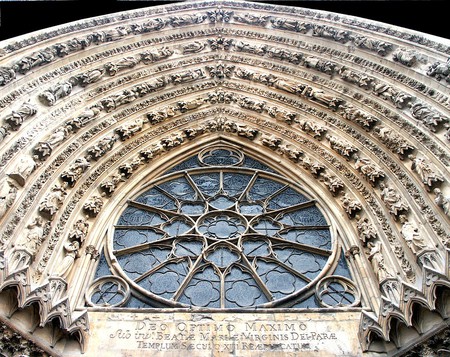 This cathedral is also one of the few that got six new stained-glass windows on its 800th anniversary back in 2011, made by German artist Imi Knoebel. You can see how the style changed to a modern one while still maintaining the colors found all around the cathedral. 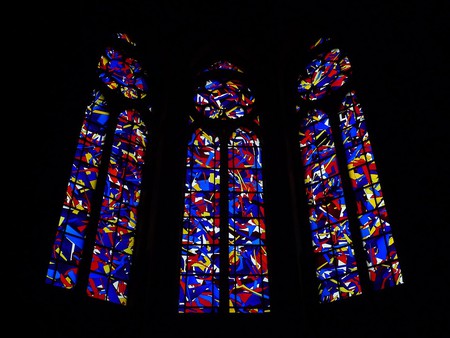 You can check Knoebel’s work more on the Reims Cathedral website here.

The beauty of the little Gothic Sainte Chapelle, built between 1239 and 1248, was commissioned by Louis IX of France to host the Passion Relics, including Christ’s Crown of Thorns. 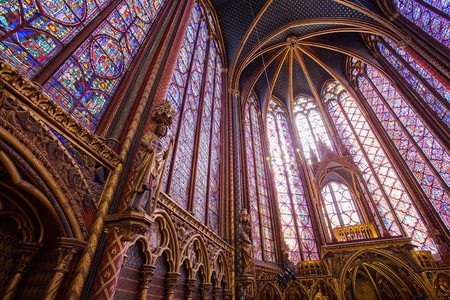 The chapelle has a specific style, everything looking very delicate. You can imagine that the stained-glass windows are the same, basically taking over most of the surface and reducing the stone wall to an insignificant amount. Some of the windows represent stories from the Old and New Testament, while others, of course, show the important part that King Louis IX played in bringing Christ’s relics to Paris. 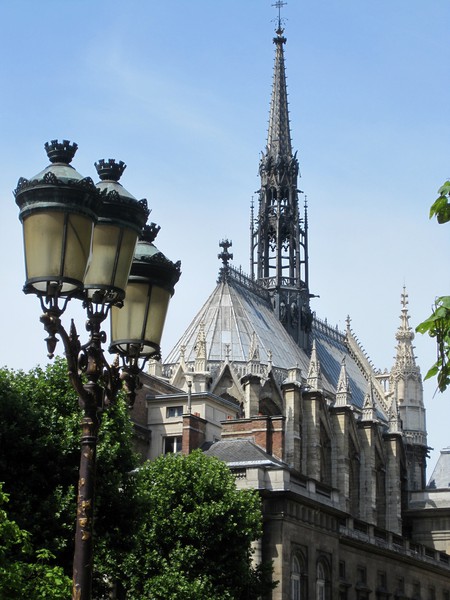 In total, 15 huge stained-glass windows fill the nave and apse. The imposing rose is even more powerful here, given the delicate architecture of the chapelle. 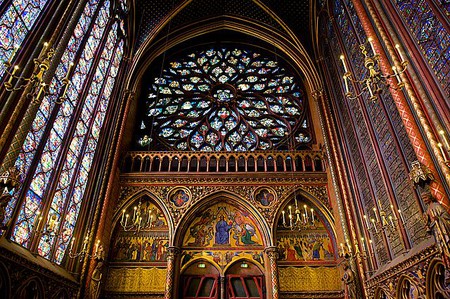 A contemporary of Chartres Cathedral, the Saint-Étienne in Bourges was completed in 1230. It looks rather complex on the outside, but on a general view inside, it is rather simple, without transepts. 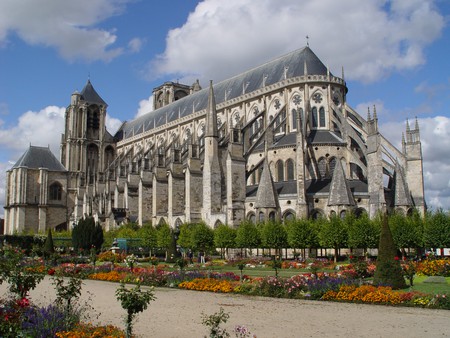 The interior is rather dark here, which is even more important when it comes to the stained-glass windows.

It’s always fascinating to look at the huge nave of such a cathedral, and then to discover this little vitrail depicting a scene from the Apocalypse:

The attention to detail in the portraits depicted here is amazing for the period. Just imagine how much work was put into doing this little part of an entire art piece.

Like the city, the Notre Dame Cathedral of Strasbourg combines French and German architecture and culture. Being in a place where several other religious buildings have existed since the Roman Empire, the cathedral has been through a lot over the ages. 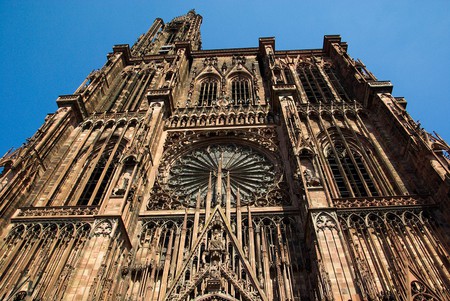 During World War II, the cathedral was hit several times, and it has been a symbol of both France and Germany for a war resistance. The French wanted to stop the war once the flag’s colors were back on the cathedral, while the Germans wanted to transform it into the monument of the Unknown Soldier. 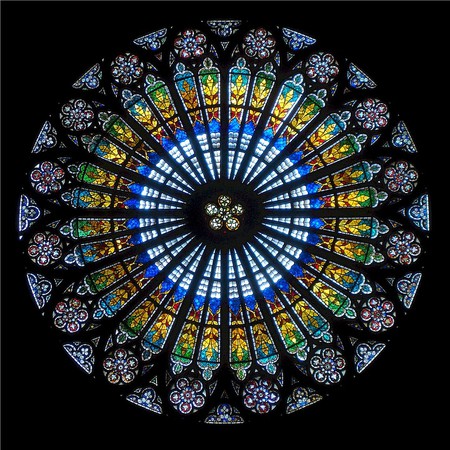 This is nothing compared to the fact that several stained-glass windows were removed from the cathedral. They were placed in Germany in a salt mine and returned after the Second World War by the Fine Arts and Archives section of the US Army.

Most of the windows come from the 12th century; however, the most recently added windows date back to the 20th century. 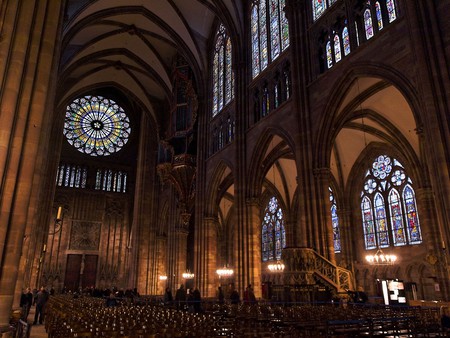 Considered by many to be the first gothic church, the Basilique Saint Denis has been the burial ground for the kings of France from the 10th to the 18th century. It is in opposition to the Reims Cathedral, reserved for the coronation of the kings. 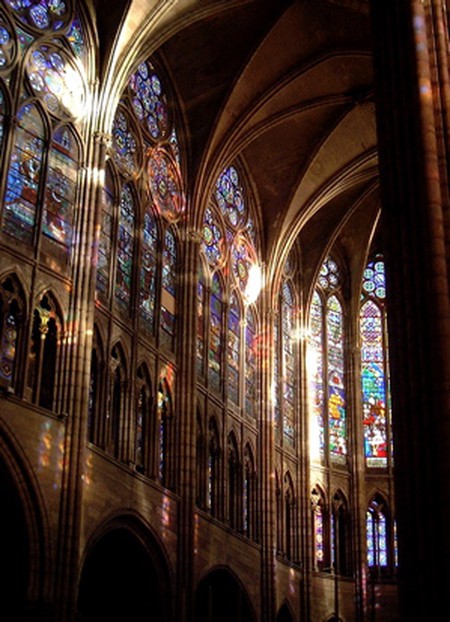 Despite being so old, the stained-glass windows date back several centuries, featuring gothic, romanesque and modern style. It is, therefore, another heavenly place for art historians. Also, being one of the first ones to start featuring amazing stained-glass windows, it has been imitated ever since by all the other cathedrals, such as Chartres or Reims. 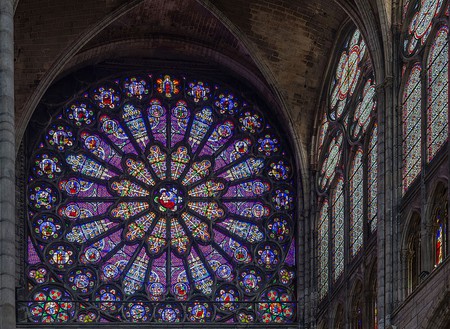 For that period of time, around 1150, the rose windows were innovative in the way they were built and how they represented scenes from the Bible. 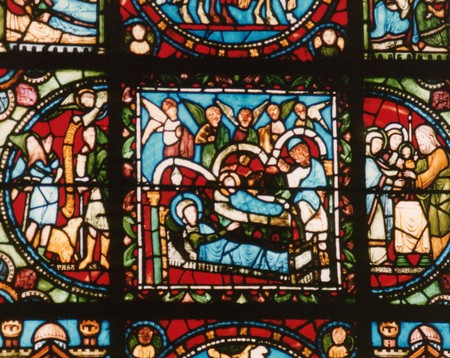 Notre Dame Cathedral of Rouen has undergone several changes throughout the years. Long story short, it was started in the 1200s, following other churches built on the same spot, and finished in the 1880s. It then followed more reconstruction after several parts were destroyed during the Second World War. Unfortunately, some of the old windows also disappeared during the war. 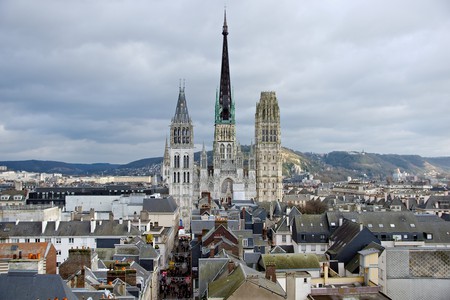 Remember the blue of Chartres mentioned earlier? Well, you can find it here as well, on most of the stained-glass windows that survived the several changes of the cathedral and that date back to the 13th century. You can also find Renaissance windows, gothic style and some modern as well, depending how hard you pay attention to all the details around.

One interesting fact about it is that the two towers guarding the entrance are not similar, being built in different styles, altering a lot of the style of the windows and the entire cathedral. According to art historians, the most interesting vitrail of Notre Dame de Rouen is L’adoration des Mages. Why?

It is full of details for a such a small passage of the Bible. Jesus is shown standing on Mary’s knees, almost feeling like he is aware of his divinity. Moreover, the colors of this vitrail can be taken as a pure example of the stained-glass windows of the gothic period. The blue of Chartres, mixed with the red of the clothes and the yellow of the sun just coexist perfectly. It is one huge scene split into three separate vitrail.

Notre Dame d’Amiens Cathedral has the highest interior of all cathedrals in France, reaching 42.30 meters. The architects really went for the heavens here, making it as big and as full of light as possible, courtesy of the vitrail.

Despite its beauty, the cathedral has lost most of its original stained-glass windows. Because of this, most of the color was lost, giving way to a large quantity of polychrome sculptures.

Another reason why this cathedral is special is because of the head of John the Baptist, which is held here after being brought during the Fourth Crusade.

It is, of course, difficult to realize how much the stained-glass windows’ style has changed over the years, but here it might be the best example. Because it lost the original vitrail, it is possible to see how the style on the new one is more modern, coming more from Renaissance onwards: 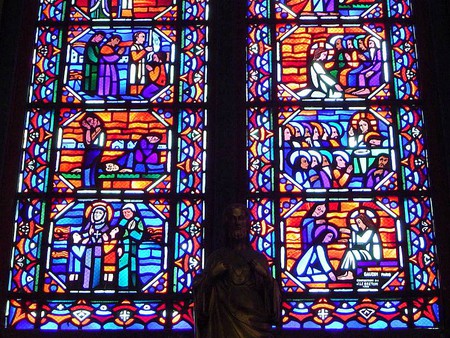 As a bonus, here is one small angel, called the Weeping Angel, built in the 17th century on a tomb — now behind the high altar (not a vitrail, but worth a mention): 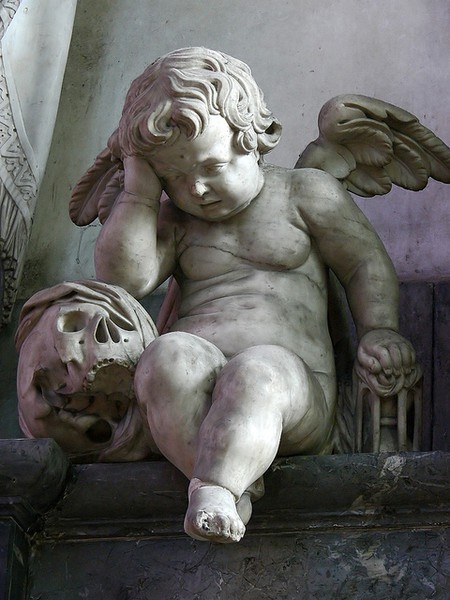 North of Paris lies the complicated and unfinished cathedral of Beauvais. The architects wanted to make the tallest cathedral of the 13th century in France (and it actually is, but being unfinished, it is not taken into consideration). To make it higher but bringing as much light as possible, the structure suffered a lot due to those times and the tools they had at their disposal. Something terrible always happened, so it was never made as perfect as the masons wanted back then. 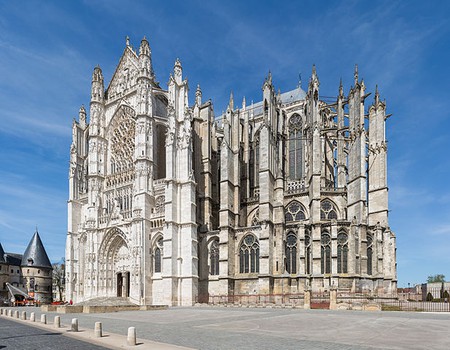 From the outside, it looks more complicated than in the inside where extra supports are added to hold the structure, thus, ruining the main idea of the vitrail, the light and everything around.

Looking at the interior, you can see that it is not very delicate. Going for as big as possible meant making some compromises when it came to the small details the other cathedrals mentioned here have.